Conan Christopher O’Brien was born in Brookline, Massachusetts on April 18th 1963 into a successful Irish catholic family. His parents were named Thomas and Ruth. 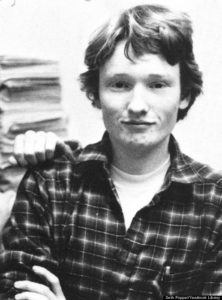 Young Conan went to Brookline High School, where his growing love of creative writing led him to become the managing editor at the school newspaper, He began spending time working as an intern for congressman Robert Drinan, and during his final year he was awarded a prize from the National Council of English Teachers for his entry into a writing contest.

Conan’s first big break came in early 1988, when executive producer of Saturday Night Live (SNL), Lorne Michaels, hired him as a writer for the show. O’Brien spent three years writing for SNL, producing regular sketches such as ‘The Girl Watchers’ and ‘Mr Short-Term Memory’. In 1989 the writers of the show, including Conan, were awarded an Emmy.

Conan would appear as an extra in SNL occasionally, as most of the shows writers did, and during the time he worked there he also produced, alongside fellow SNL writer Rob Smigel, a script for the pilot episode of a series called ‘Lookwell’, starring former Batman and Family Guy favorite, Adam West. Lookwell was screened by NBC in 1991 but was never followed up by the network. Despite the lack of interest by NBC, Lookwell eventually went on to become a cult hit, popular amongst the users of the early internet.

The failure of NBC to pick up Lookwell affected Conan greatly, he was burned out in 1991 from the years of writing and stressed out from the pressures of the job, he quit Saturday Night Live later that year with no real plan for the future in mind.

Conan’s lack of concern about the future was validated soon afterwards when the producers of ‘The Simpsons’, wanted him to write for the show. The cartoon sensation was notorious amongst writers because it had never previously hired writers, but Conan became one of the first new hires as the show began to grow in popularity. At the time of applying for the job, Conan had no real expectation of being selected to write for the hit show, but was encouraged to do so by Lorne Michaels, who had heard that Conan was the main target for the shows producers.

He wrote for The Simpsons for two years, until 1993, and quickly became an integral part of the writing team. He single-handedly produced some of the most revered episodes in the long-running show, including ‘Homer Goes to College’ and ‘Marg vs. the Monorail’. It was generally accepted by fans and critics alike, that Conan’s involvement had evolved The Simpsons from a somewhat realistic representation of a typical family, into a far more surreal viewing experience.

In 1993, the long time host of chat show ‘Late Night’, David Letterman, was preparing to leave the show, and executive producer Lorne Michaels called up his old Saturday Night Live writer, Conan, to see if he would be interested in producing the show after Letterman left. Conan revealed that he would much rather perform in the show, instead of producing it, and Michaels arranged for Conan to perform a test audition, with an audience made up of his fellow Simpsons writers.

Lorne Michaels watched the audition from New York via satellite with other NBC executives and they were pleased with what they saw. Conan was selected as the new host of Late Night and received the news during a recording session for The Simpsons. He was so overwhelmed at having been awarded the job that he fainted, regaining consciousness a few minutes later with his nose deep in a shag pile carpet.

Conan’s debut on prime time TV took place on September 13th 1993, but the initial reception to the show was not overwhelmingly positive. The unfavorable reviews were not helped by Conan’s own opinion of his performance, that he wrote about in a self-deprecating piece for the New York Times entitled ‘O’Brien Flops’, which also happened to be printed on the day of his first show.

Other critics saw Conan as nervous and jumpy, some of them even objected on the grounds that he was too young, or, at six feet four, too tall. Throughout the first year of Conan’s time with the show, it was constantly under threat of cancellation, executives were keen to replace O’Brien and had earmarked Greg Kinnear, who hosted ‘Later’ the late-night talk show which followed Conan, as a potential replacement for him.

Eventually Conan overcame the jittery performances of early shows, and the banter between him and sidekick Andy Richter gradually grew in popularity. A major morale booster for Conan came in 1994 when the master chat-show host, David Letterman, appeared on the show. Conan’s spirits were elevated by David agreeing to guest on Late Night, believing that if Letterman himself was prepared to endorse the show in such a way then he must be doing something right.

The show developed over time, and grew in popularity. Conan’s performances became more comedy-orientated and the viewing figures grew steadily. The viewers were largely young and male, a highly sought after demographic for network bosses, and gradually the show began to become increasingly competitive in the talk-show ratings.

As time moved on, and recognition of Conan’s presenting Abilities grew, alongside the popularity of Late Night itself, the show began to be nominated for an Emmy Award, in the category of ‘Best Writing in a Comedy/Variety series’. Although it was nominated every year from 1996 to 2009, it only won the award once, in 2007. That was not the only accolade achieved by Conan and the other Writers of Late Night, the show won the Writers Guild Award for Best Comedy/Variety writing five times from 1997 to 2004.

In 2001 Conan launched his own production company, Conaco, which became involved in the production of Late Night from that point on. The show had consistently achieved ratings of three million for almost a decade, and one critic called the improvement in the quality of the show over the period ‘One of the most amazing transformations in television history’.

Conan’s spontaneous attitude and loose format for the show allowed the comedy to sometimes veer off in unexpected directions. In 2005 Conan announced that fans had for some time been mentioning his supposed resemblance to female Finnish President Tanja Holonen. That was all it took for Conan to announce his support for her when she stood for re-election in 2006. Declaring that he loved looking like a World leader, he made semi-humorous campaign ads in support of her, in addition to a few attack ads that accused her rivals of being responsible for smaller fish, amongst other wild and unusual charges. He appeared on Finnish TV several times, and after President Holonen’s successful re-election campaign, she met with Conan, grateful for the support he had provided.

In February 2009, Late Night with Conan O’Brien came to the end of a successful 13 year run. Conan’s former right hand man Andy Richter made a guest appearance and was joined by fellow guests John Mayer and actor Will Ferrell. The White Stripes performed as the show finished and as a prelude to Conan destroying the Late Night set with a fireaxe. It was a typically hilarious and surreal ending for the show, and most critics lamented the end of an era.

O’Briens departure from Late Night was the result of a 2004 contract agreement he had made with NBC. The arrangement was that Conan would take over the hosting of The Tonight Show from Jay Leno in 2009. His debut show was aired on June 1st 2009, once again with Will Ferrell as his guest. Conan’s time at The Tonight Show continued on in much the same chaotic vein as Late Night, in September 2009 he received a slight concussion during filming, but not one to feel sorry for himself, Conan was back at work the next day, already writing a few jokes about the incident.

Unfortunately, NBC executives made the decision to move The Tonight Show to 12.05am and Conan was dismayed at the news. He felt that the format of the show would be irrevocably changed at the new time-slot and negotiated with NBC to leave the show. He parted company with NBC in January 2010, with a deal that reportedly awarded him a golden handshake of $45 million.

In February 2010, Conan, who had remained tight-lipped about his departure from the show, opened a twitter account, and his fans were keen to hear his words of wisdom after being denied the chance to watch him daily. The Twitter account had over 300,000 followers within 24 hours, and today in July 2016, has over 21 million, making it the 53rd most followed Twitter account in the World.

Conan moved to cable network TBS after leaving NBC to begin Conan, which has since been syndicated to HBO, TNT, FOX, Comedy Central and Showtime, amongst others. Conan has re-united his old Late Night partnership with sidekick Andy Richter, to the applause of long-time fans, and in 2014 TBS announced they had commissioned the show up until 2018. In 2015 Conan received the honor of being the first US personality to be granted permission to film inside Cuba, after the warming in relations between the country and the United States.

Now in 2018, Conan posts on his Twitter account most days, his comedic streak is never far away, even on the most controversial of subjects.

In 2002 Conan married Elizabeth Powel, who he met when she appeared on Late Night with him in a comedy skit. The couple have two children, daughter Neve born in October 2003, and son Beckett, who followed in November 2005. As well as an extensive list of TV special appearances, on shows ranging from 30 Rock to Family Guy, Conan has appeared in over 15 big budget films, and a documentary that focused on his 2010 comedy tour, ‘Conan O’Brien Can’t Stop’.