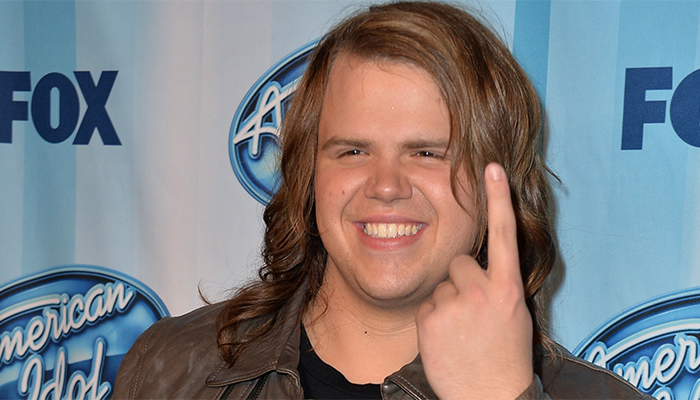 Caleb Johnson is best known for winning the thirteenth season of the singing competition series, American Idol. With his commanding vocals and fiery energy, the singer defeated fellow finalist, Jena Irene, in the show’s Top 2 finaleーearning him the championship title and a recording contract with Interscope Records. What some of us may not have known, is that the singer had actually auditioned for the show’s tenth and eleventh seasons in 2011 and 2012 however was ultimately eliminated from the competition prior to being recognized for his talents.  Johnson later took a year’s break during the twelfth season to recuperate and improve on his singing; he then auditioned for the thirteenth season in 2014. He is the second returning contestant to have won American Idol in the show’s history.

Johnson shortly released his debut album, in which he had cowritten most of the tracks, “Testify” on August 12, 2014ーit debuted at the number 24 spot on the US Billboard 200 Chart and sold over 11,000 units during its first week. As of April 2016, the album has now sold over 24,000 copies. He currently holds the record of being the quickest American Idol winner to have released a debut album following their win.

Since his win back in 2014, Johnson has been invited to perform at various events and venues and has even gone on a solo tour last year. However despite this, many fans appeared to have observed the fact that the singer had been seemingly pushed aside by his recording company after his win; for some reason, he did not seem to have the same support behind him as some of the competition’s previous winners. In spite of that, Johnson has been forging forwards to turn his music dreams into a realityーeven going as far as paying for his marketing campaigns and music videos out of pocket!

But what has the 70’s-style rock singer been up to recently? Is he preparing to release a second album? What happened to Caleb Johnson? Where is he now in 2018? 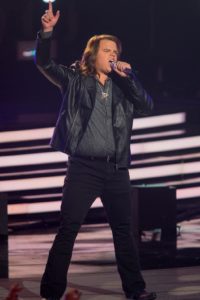 Born on April 23, 1991 in Ashville, North Carolina, Caleb Johnson is the son of David Johnson, a former football coach who worked at the Parks and Recreation Department of Buncombe County and Tamra Johnson, an accountant. Despite their occupations, both of his parents had backgrounds in music; in fact, the singer has accredited his mother for his current love and passion for rock & roll music. As a young teen, he was a student at Clyde A. Erwin High School in Ashville and was part of the school drama club and chorus. Besides being known for his vocals during those days, Johnson was also an athlete and had played for various sport teams. He was also an active member of the local church, Calvary Baptist and had often involved himself in various missionary and volunteer work.

Johnson’s interest for singing peaked when he was 17 years old; Josh Sawyer, a close friend from school, had asked he sing in his band called “Gorgon”. The first song that the group had ever performed as a band was Creedence Clearwater Revival’s “Fortunate Son”; they had taken part in the school’s talent show event. Growing up, Johnson’s favourite rock band was the Canadian “Rush”. The singer later cited American singer, Chris Cornell to be one of his greatest musical influences.

Following his high school graduation on June 30, 2009, Johnson became the lead singer of a rock band called “Rock Bottom”. After briefly singing and performing with the group, he later left the band to join another rock band called “Elijah Hooker” with Josh Sawyer, his friends from high school’ Johnson once again took the role of lead vocalist in the group. Not counting Johnson and Sawyer, the band consisted of three other bandmates: Brian Turner on Keyboard, Colten Emery on drums and Shawn Foerst on bass. Together, the band later released an album a few years later in June 2013ーthis would be Johnson’s first professional recording. The album consisted of 10 tracks, and featured the song “Happiest Man” as its lead track.

Caleb Johnson and His Time with American Idol 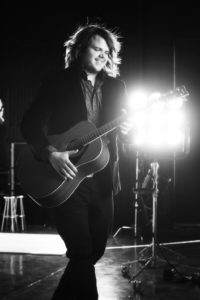 As an aspiring rock singer, Johnson experiences his fair share of hurdles before finally climbing up to the top during the thirteenth season of American Idol. The singer had auditioned three times for the competition in a span of four years. In 2011, he auditioned for the show, but was eliminated quickly. Not letting the disappointment get to him, the singer once again attended the auditions in 2011 for the eleventh season of American Idol. Despite having been able to make it further into the competition compared to the previous year, Johnson was eventually cut from the show after a less than ideal performance of “Old Time Rock and Roll”.

Determined to succeed a third time around, Johnson once again auditioned in 2014 for the thirteenth season of the show. For the auditions, he performed his own original song, “Into the Voice” and was met by praises from the Idol Judges. After advancing through the initial rounds as before, he soon found himself making headway in the competition. During the Top 30, the singer sang “Stay With Me” by the Faces which garnered him applause from the audience; he was then voted through to the Top 13 round. He later performed “Working Man”, a song from his favourite band, Rush during the show’s “Home” weekーit too was met with nothing but praise. Following weeks of singing battles, Johnson soon found himself neck and neck in a sing off against fellow Top 2 finalist, Jena Irene. After receiving the majority of casted votes for his performance of “As Long as You Love Me”, he was crowned winner of the thirteenth season of American Idol on May 21, 2014. 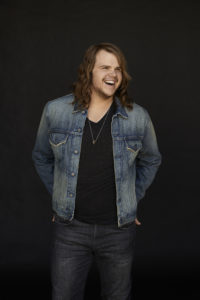 Following his win, Johnson took off to take part in the annual 2014 American Idols Tour, which kicked off on June 24 in Binghamton, New York and ended in Redmond, Washington, on August 23. However compared to previous years, the tour took place in smaller venues and did not have a live band as accompaniment. A few months after returning home from touring, Johnson released his first major debut album titled, “Testify” on August 12, 2014 under his new recording label, Interscope. The singer later announced that the album had been recorded in three weeks in between the competition finale and the tour. The album debuted on the US Billboard 200 Chart at number 24 and sold over 11,000 copies during the first week. As of April 2016, it has sold 24,000 copies.

In addition to working on his recordings, Johnson also stayed busy performing at various events such as the National Memorial Day Concert in Washington, DC on May 25, 2014, in which he sang the National Anthen. The singer also attended fellow finalist, Jena Irene’s senior prom as her date a few days later on May 28, 2014.

In the summer of 2014, Johnson mades the headlines when he sparked an outrage by calling himself the first “real rocker” to have won American Idolーin doing so, completing dismissing season 7 winner, David Cook. The comment, which was said during an interview with Yahoo! Music’s Lyndsey Parker, angered many of Cook’s fans who accentuated the fact that their Idol winner had performed songs by notable rock artists such as Chris Cornell and Our Lady Peace. In response to Johnson’s comment, previous season 4 winner runner up, Bo Bice, also gave Cook his support on Twitter. In the end, many criticized the singer for his actions; speculating that he had started the feud with Cook in order to gain record sales.

Johnson eventually part ways with his previous recording label, Interscope, in late 2015. However this didn’t come as a major surprise as the singer had expressed his frustrations with the company earlier; one being the fact that he did not seemed supported by Interscope and that he instead, had felt “shoved aside” after his Idol win. With the lack of support, Johnson had stated that he had to do the majority of the promotion for his album himself; going as far as paying for his own marketing campaign out of pocket. 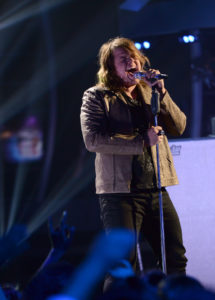 Since parting ways with Interscope, Johnson has created his own independent recording label called “Big g Johnson Records” and have began working on his upcoming second studio album. The singer has also signed a contract with new management, McGee Entertainment. The lead single titled, “Holding On” was released back in February 9, 2016. The song, cowritten by his friends Chris Roberts and Sam Ashworth in late 2015, captures a powerful sentiment which is based on an individual clinging onto faith in order to get out of life’s darkest hour. Johnson has also recently performed “Holding On” in a concert at the Broadmoor World Arena in Colorado Springs this July. On April 6, 2016, the singer released the second single of his upcoming album, “Hanging with the Band”.

However while recording independently can offer the singer freedom, it can be a nightmare financially. Consequently, Johnson has turned to the crowd funding website, Pledgemusic, to help fund his new recording endeavours. Through Pledgemusic, fans with an access pass are also able to purchase and preorder various pieces of merchandise and exclusive items such as autographs. According to the website, pledgers will also be given a copy of Johnson’s upcoming recording as a digital download on the day of release.

Besides working on his upcoming EP and album, the singer has also been busy participating with the “KISS – Freedom to Rock Tour” this year. Organized and started by the American Rock band, Kiss, the tour will be their band’s first full scale tour in North America since 2014; our Idol winner, Johnson will be tagging along in support, to participate in the opening act of the events. The tour first kicked off on July 7, 2016 in Idaho with Johnson and the group will be sticking together until August 10; The Dead Daisies will then be taking Johnson’s place from August 12 onwards to the end of the tour. Remember guys, it’s still not too late to get tickets!

Earlier this year in February, the singer also returned back to American Idol alongside other fellow alumni to mentor the Top 12 semi-finalists of the fifteenth season. The group had also performed a duet together prior to the judges revealing the results of the week.

If you’d like to stay up to date with Caleb Johnson, then you’ll be glad to know that you can catch this rock star on his official Facebook  or Pledgemusic pageーit’s also where he tends to announce his latest news. You can also find him on social media on Twitter (@CalebJohnson) and Instagram (@CalebJohnson)!