Sharon Yuu has come to the Shark Tank to show the Sharks her product, Magic Cook. She is seeking an investment of $100,000 in exchange for 20% in her company. Magic Cook is the first out-door, on-the-go cooker for any one, any where, and any time. Sharon jumps right into the demonstration of how the Magic Cook works, and will demonstrate how to cook a delicious salmon meal with no power, no battery, no gas and no fire.

Sharon first adds in the salmon, then some vegetables for taste and flavor. Then, taking a Magic Cook pack, she drops the pack into the bottom portion of the container and adds water. Move the stainless steel container into the container which houses the pack and the water, then add the lid on and lock it tight, and in about 30 seconds, the water will begin to regularly boil. 24 Minutes later, the salmon is entirely complete. However, Sharon has brought with her a completed meal, just like the fancy cooking shows. Sharon pulls out a delicious looking salmon, and then pulls out yet another Magic Cook product. 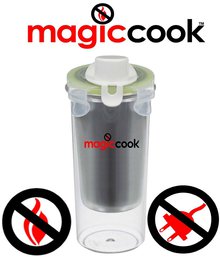 If you desire hot soup or a hot drink with your meal, Magic Cook also comes as a tumbler glass which allows for any soups or beverages to be heated up and enjoyed straight from the bottle enclosure. With the help of the Sharks, Sharon can make the Magic Cook into a “hot commodity!” But Kevin doesn’t understand why anyone would want the Magic Cook product since he could go get a meal at a restaurant. However, Sharon thinks that the product could be for everyone, but would definitely be more appropriate for the outdoorsmen of the world. There are other options, Kevin says, but Mark reveals that he would definitely use the Magic Cook at his desk.

Kevin then asks if Mark just doesn’t have a microwave in his office, but Mark says he would be a big fan of making food at his desk. Sharon then passes out samples to each of the Sharks, while Lori asks a question that the Sharks have been thinking the whole time – what is inside the Magic Cook heat packs that cause the water in the lower housing to boil? The package that has water added to it contains calcium and sodium, which causes the water to heat quickly, and Sharon has searched and received lab test reports to support that the water is nontoxic and safe to use to cook food. Kevin is still unconvinced; while he could see the Magic Cook as having a place in an emergency kit, if he ever found himself in a situation where he had no access to hot food and had to use the Magic Cook to eat dinner, he would feel that he took a wrong turn somewhere in his life.
Mark then changes the discussion to the economics of the Magic Cook – how many has Sharon sold, how much they cost to make and are sold for, sales, all the meat of the matter. Each box costs $6.50 to make, and include one of the heat packs required to boil the water. The box kits are sold for $29.99. The tumbler-sized bottles cost $5 to make and also include one heat pouch, and are sold for $19.99. The Magic Cook are sold in stores like Dick’s Sporting Goods and some Gander Mountain stores, which are stores more directed towards outdoorsmen or sporty types. The heat packs, which are sold in packs of 5, cost around $2 to make (for all 5 packs) and are sold for $9.99.

Daymond then poses the interesting question of where Magic Cook products are made, which Sharon answers that they are made in China. Daymond then asks how Sharon’s experience has been with making the products in China, and Sharon starts by saying that her background is actually in the “promotional product” industry, which is very similar to campaign ads on television for those “call now/limited deal” type of promotions. So, Sharon has some experience in the industry, and has been in the manufacturing business for the past 15 years, and handling production and sales with Chinese manufacturers has been an absolute breeze for her. However, sales within the past 12 months have only totaled up to $150,000 of revenue. 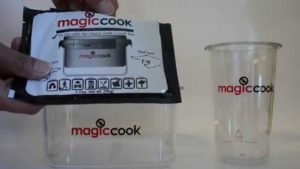 Nick then asks how many heat packs are being sold, since that is a proper metric of how many people are actually using the products. Sharon then says that they have sold 35,000 5-packs of the heating packs, which draws an amazed response from all the Sharks. Lori confirms that this is a genius strategy, since once you buy the Magic Cook, you have to continually purchase the heat packs in order to keep using the product. Kevin still thinks the Magic Cook is a niche product, since he feels like 9 out of 10 people still won’t buy the product, even if they were all outdoorsmen. The product is niche in that it has a place in emergency kits, however – being able to cook a meal without lighting a fire could be attractive, Kevin is forced to concede.

Sharon then turns Kevin’s attention to the tumbler-sized bottle, which can be used to brew hot cocoa or even drink soup straight from the bottle. This potentially leaves the option for the person to go out, catch a fresh fish and cook it, but the male Sharks all groan – freshly-caught game that isn’t properly prepared is hardly ever a delicious meal, as most outdoorsmen will be able to tell you. Sharon is stretching her story in order to make the Magic Cook more marketable. Mark says that while the product would be good to advertise towards the outdoor market, the product ultimately requires a demonstration in order to educate the customer, which is what makes the Magic Cook a tough deal to invest in.

Guest Shark Nick Woodman, founder of the GoPro, is on tonight’s episode of Shark Tank. He agrees with Mark, saying that someone will have to do a lot of work in order to make the product marketable and educate the consumer on what they are buying. In order to introduce the product, there is going to have to be dedicated personnel to showcasing how the Magic Cook works. Mark then takes the opportunity to point out that Sharon’s example of being able to cook salmon at work was silly – there needs to be something that triggers the desire to be able to cook food anywhere, but Mark has not heard that, and is the first Shark out of the deal.

Nick Woodman starts by saying that an important thing to think of when inventing a product is that the product must solve a pervasive problem in order to succeed for longer than a few years, and not trying to create a new way to do something that isn’t broken – there are other alternatives to boiling water and steaming meals available to outdoorsmen, and there is just too much work involved in investing in the Magic Cook. Nick is out. 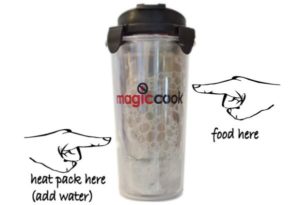 Kevin relents that some people will be interested in the Magic Cook since those type of people are either outdoorsmen or the type of person who thinks that the world will end tomorrow, but the problem will be in finding those people and getting them to purchase the product. It just is not a wise investment, so Kevin is also out of the deal. Kevin isn’t a camper or an outdoorsmen, so the product lacks passion for him.

Daymond is the last Shark remaining, and the first question he asks is why he thinks Sharon requires a partner. While Sharon has been in the business for 15 years, she has never brought a project to the scope of the Magic Cook. Daymond thinks that the product is beautiful and elegant in its simple solution to boiling water, and since Sharon has shown that she has some knowledge and expertise and even contacts in China, he is showing strong interest.

Daymond extends an offer of $100,000 in exchange for a 33% stake in the company, giving him a third of the company. Sharon then asks if she can make a phone call to her lawyer, which Daymond denies, saying that a phone call to a husband, spouse, or familial member would be more appropriate – having a lawyer around would require Daymond to grab his 19 other lawyers in order to work through the deal. Daymond wants to speak with her, the decision maker.

After some thought, Sharon accepts Daymond’s offer of 33% in exchange for a cash investment of $100,000 in her Magic Cook business.

The Magic Cook seems to have lost its footing in the outdoorsmen market, as the only place I was able to find the Magic Cook being eligible for sale was Amazon. Magic Cook has its own website, and an Amazon storefront, where the only the Magic Cook Cup is available for purchase. I believe that Magic Cook may be licensing out the rights for the patent, or at least the design, as there are only 3 Magic Cook Cups available on Amazon, and Amazon does not know if the owner, in this case, Sharon Yuu, intends to replenish the inventory.

Amazon also yielded some products that look and work shockingly similar to the Magic Cook line of products, which means that the technology that made Magic Cook proprietary may have been taken. I also believe that Magic Cook is on its way to closure, as the official website store front also only has the Magic Cook Cup available, as well as bulk refills of the heat pack available. The bulk heat packs are on sale for a price of 45% off, costing $69.49 for a 50 refill pack with an included Magic Cook Cup. Either Magic Cook is having a tough time keeping up with demand, or interest in the product is waning.