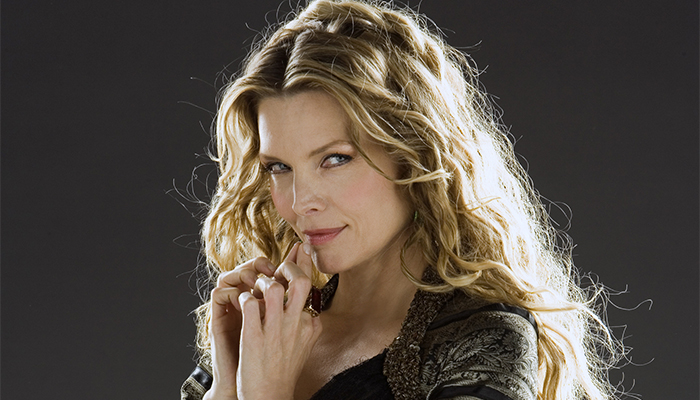 Michelle Pfeiffer is an American actress probably best known for her role in the thriller film, Scarface. Having first step foot into the acting world during the late 70’s and early 80’s, Pfeiffer has since appeared in countless television series and films over the years. However while she had made numerous appearances on television at the time, it wouldn’t be until 1983 that she would be brought to mainstream attention after having been cast in the thriller-drama movie, Scarface. Some of her other notable early works include Dangerous Liaisons (1988), The Fabulous Baker Boys (1989), The Russia House (1990), Frankie and Jonny (1991), Batman Returns (1992) and The Age of Innocence (1993)ーall of which have earned her numerous award nominations.

Continuing through her acting career in the 90’s, Pfeiffer had always appeared more on the big screen than the small. Her role as Catwoman in the superhero film, Batman Returns had been one of her most well known character portrayals at the time; it also garnered her two nominations for the MTV Movie Award. Shortly afterwards, she also starred in the romantic film, The Age of Innocence which featured actors Daniel Day-Lewis and Winona Ryder as the rest of the lead protagonists. Although the movie did not perform ideally at the box office, it had received critical acclaim from critics, earning itself a score of 80% on the reviewer website, Rotten Tomatoes.

Having shifted her attention over to films, Pfeiffer hasn’t starred in any major television series since the late 1990’s when she appeared on an episode of Muppets Tonight. In the last few years, she has graced a handful of movies with her presence including the horror comedy, Dark Shadows (2012), the drama film, People Like Us (2012) and the crime comedy, The Family (2013). Throughout her long acting career, the actress has received a number of awards including a Golden Globe Award, a BAFTA Award, three Blockbuster Entertainment Awards amongst many others; she was also inducted into the Hollywood Walk of Fame in August 2007.

But what has the blonde haired celebrity been up to since? What happened to Michelle Pfeiffer? Where is she now in 2018? 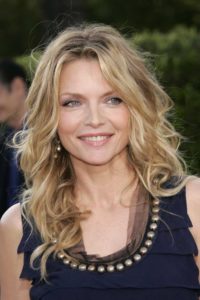 Born on April 29, 1958 in Santa Ana, California, Michelle Marie Pfeiffer is the daughter of Richard Pfeiffer, a video game creator and Donna Pfeiffer, a housewife. She is the second oldest out of four siblings; she has an older brother named Rick and two younger sisters named Dedee and Lori. Coming from a mixed heritage, Pfeiffer is of Welsh, English, French, Dutch, Irish and Swedish descent. Although her family was originally from North Dakota, they later relocated to Midway City where she would later spend most of her childhood.As a teen, Pfeiffer went to Fountain Valley High School in the suburban city of Fountain Valley, where she would later graduate from in 1976. While she had had a fairly normal childhood, she would unfortunately be bullied by other students in her class during her early teenage years.

After graduating from high school, she enrolled at Golden West College in Huntington Beach, California where she studied psychology however she later dropped out of to work full time as a cashier at a local Vons supermarket. Realizing that that wasn’t the life that she wanted, she eventually decided on pursuing a career as an actress. Taking the advice of her hairdresser at the time, Pfeiffer went on to compete at the Miss Orange County Competition at the age of 20 in hopes of winning for an opportunity to become an actressーshe would eventually win the competition. Later that same year, she also participated in the Miss California Pageant but would fall short, and finish in the sixth position. Through her perseverance in the pageants, she would eventually secure an agent and take the first step in her career as an actress. 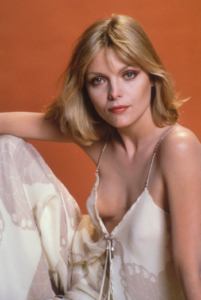 Pfeiffer made her television debut in 1978 when she landed a small role in the ABC series, Fantasy Island. Throughout the next couple of years, she would continue to star in a number of minor television shows, including Delta House (1979), The Solitary Man (1979), Enos (1980) and BAD Cats (1980). Although none of the series were particular commercials hits, it had still given the actress valuable experience at the time. Wanting to improve her acting, Pfeiffer then began taking acting lessons at the Beverly Hills Playhouse, an acting school located in Los Angeles. Shortly after completing the class, she would appear in her first television filmsーCallie and Son (1981), The Children Nobody Wanted (1981) and Splendor in the Grass (1981).

After five years of working in the industry, the actress would finally land her breakthrough role in 1982 when she was cast in the musical romantic comedy, Grease 2ーit would also be her first major acting role on the big screen. At the time of the movie’s casting, Pfieffer was actually one of the more unknown actresses to have attended the auditions for the film’s lead role of Stephanie; however, she would eventually reign over other better known actresses at the time such as Kristy McNichol, Lisa Hartman and Andrea McArdle for the part.

As the sequel to the original Grease (1978), the movie revolved a British exchange student named Michael Carrington (played by Maxwell Caulfield) who finds himself having to prove himself to a girl named Stephanie Zinone, the leader of a girl gang named Pink Ladies. Although the movie was met with negative reviews upon its release in June 1982 (it was later nominated for a Stinkers Bad Movie Awards for “Worst Picture”),  it would remain to be one of Pfeiffer’s greatest acting roles of all time. For her portrayal of Stephanie, the actress also won herself a Young Artist Award for “Best Young Motion Picture Actress” in 1983. 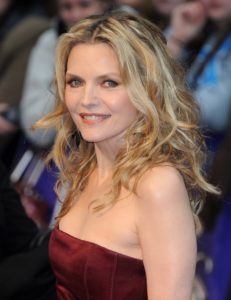 Having gained recognition for her role in Grease 2 despite the film’s rather negative reviews, Pfeiffer soon found herself cast as a female lead once again in the American crime-thriller, Scarface. Having first been released in December 1983, the film was actually a remake of an earlier movie of the same name. Directed by Brian De Palma and set in the 1980’s, Scarface revolved around a character named Tony Montana (played by Al Pacino)ーa Cuban refugee who finds himself arriving in Miami, who would ultimately rise to become a powerful drug lord in the city. In the thriller, Pfeiffer plays the role of Elvira Hancock, Tony’s cocaine addicted wife. Other members of the ensemble cast include Steven Bauer, Mary Elizabeth Mastrantonio, Al Pacino, Paul Shenar, Robert Loggia and Miriam Colon.

Although some had criticized the movie for its violent nature and usage of graphic drugs, it was a big hit at the box officeーhaving grossed $45 million dollars in North America at the time. Unbeknownst at the time, the film would also eventually gain a “cult following” throughout the next few years. A hit amongst viewers, Scarface would also go on to be nominated for a number of awards, including three Golden Globe Awards for the “Best Actor in a Motion Picture Drama”, “Best Original Score” and “Best Supporting Actor in a Motion Picture” categories. As Pfeiffer’s breakthrough role, the movie had also been significantly helpful in launching the actress’ careerーsince she had been relatively unknown prior to her time in the film. 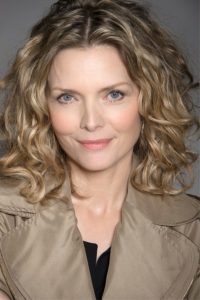 Having received mainstream attention for the first time after her time on Scarface, Pfeiffer then went on to star in a number of films including Into the Night (1985), Ladyhawke (1985), Sweet Liberty (1986), and Amazon Women on the Moon (1987). In 1988, the actress was cast in the comedy, Married to the Mob as the widow of a murdered gangster; her portrayal of the role would eventually earn her her very first Golden Globe Award nomination for “Best Actress in a Motion Picture Musical or Comedy”. Later that same year, she also starred in historical film, Dangerous Liaisons playing a high-minded victim of seduction; not only did the role garner Pfeiffer her second Academy Award nomination, but it would also win her first BAFTA Award for “Best Actress in a Supporting Role.”

Throughout the 1990’s and 2000’s, the actress continued to appear in a number of films and television series. Some of her most noteworthy projects from that period include Batman Returns (1992), Love Field (1992), The Age of Innocence (1993), Dangerous Minds (1995) and White Oleander (2002)ーall of which had earned her countless awards and nominations. In 2007, Pfeiffer was also cast as a main character in the musical romantic comedy, Hairspray opposite actors John Travolta and Nikki Blonsky. A huge commercial success, Hairspray would also be one of Pfeiffer’s more recent roles in a well-known film. 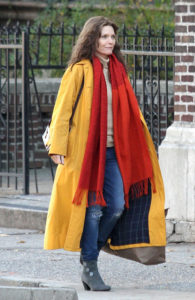 Having taken a few years break from acting (her last major role had been in 2013), Pfeiffer once again returned to the scene to film an upcoming movie titled, Beat-Up Little Seagull. Directed by Andrew Dosunmu, the film tells the story of a woman pushed to the brink of her life following her mother’s death (played by Pfeiffer) after she meets a man whom she eventually falls in love with. Other members of the cast include actors Babs Olusanmokun, Kiefer Sutherland, Celia Ai, Marc Menchaca and Anthony Okungbowa, amongst others. While no official release date for the film has been announced, it will presumably be out sometime in late 2016 or early 2017.

But that’s not allーPfeiffer has also been shooting for an upcoming drama film titled Untitled Darren Aronofsky Project alongside big names Jennifer Lawrence, Javier Barden, Ed Harris and Domhnall Gleeson. Directed by Darren Aronofsky himself, the movie will revolve around the relationship between a couple, after the tranquility of their home is disrupted by a number of uninvited guests. Filming for the project began in June of this year and is expected to be complete later this August. The movie currently has a release date of December 29, 2017.

Besides work on the big screen, the actress has also been busy recently with the filming of yet another upcoming television film called The Wizard of Lies. Based on a non-fiction book by Diana Henriques of the same name, the TV film will tell the story and scandal of Bernie Madoff (played by Robert DE Niro)ーan American stockbroker who is later convicted of fraud. In it, Pfeiffer will be portraying the role of Ruth Madoff, Bernie’s wife. Filming for the movie first began at the end of August last year and is currently scheduled for a 2017 release on the HBO Network.

Unfortunately for us fans, the star herself doesn’t seem to be active on any social media platforms, so staying connected with her news may be a little tricky. Your best bet would probably be to follow her page on IMDb or her (unofficial) fan club page on Facebook!