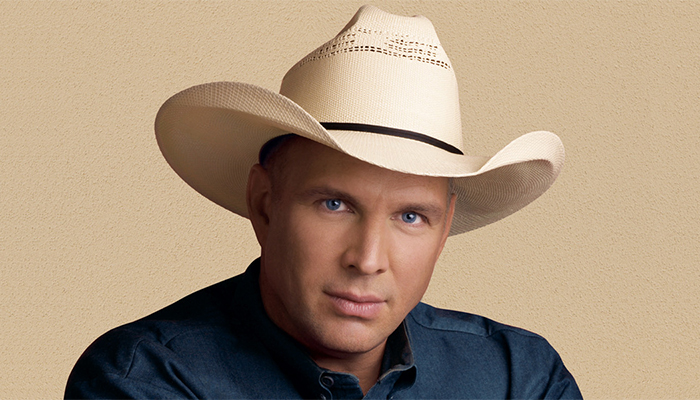 Having taken the world of country music by storm in the 80’s, Garth Brooks is one of the most renowned country pop singers in the world. A gifted singer ever since a young age, Brooks has dazzled fans with his captivating vocals for many decades since his debut in 1989. He released his first studio album at the age of twenty seven and has since gone on to release over fifty records as a professional music artist. Some of his early recordings during the 90’s include No Fences (1990), Ropin’ the Wind (1991), The Chase (1992), In Pieces (1993), Fresh Horses (1995) and Sevens (1997), amongst many others. As of 2014, Brooks has sold over 70,000,000 records in the United Statesーmaking him the best-selling musician in the country.

Besides being one of the world’s greatest musicians, Brooks has also made a number of television appearances including a couple of acting roles in the video short, The Thunder Rolls (1991) and in the TV film Behind the Life of Chris Gaines (1999). A famous pop star, he has also been invited onto dozens of American talk shows including Hollywood Squares (2001), The Rosie O’Donnell Show (2002), CMT Insider (2006), The Tonight Show with Jay Leno (2009), and Jimmy Kimmel Live (2014), amongst several others. A multi-talented man, Brooks has also acted as an executive producer for a handful of shows including Garth Live from Central Park (1997), Call Me Claus (2001), Unanswered Prayers (2010) and Garth Brooks: Live from Las Vegas (2013).

But what has the renowned country singer been up to as of late? Has he been recording back at the studio? What happened to Garth Brooks? Where is he now in 2018? 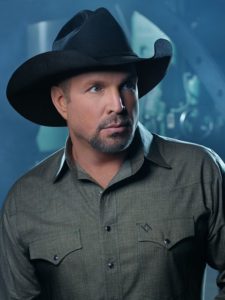 Born on February 7, 1962 in Tulsa, Oklahama, Troyal Garth Brooks is the son of Colleen McElroy Carroll, an Irish country singer and Troyal Raymond Brooks Jr., an oil company worker. He is the youngest child out of five; he has four older half-siblings, three brothers and a sister. Raised in the tight-knit community of Yukon, Brooks was introduced to the guitar strings early on in his childhood by his father. A frequent participant of his parent’s weekly talent nights at home, he spent much of his early life performing skits and singing. However despite his musical talents, his older sister Betsy had been dubbed to be the musician of the family while Brooks was known as the athlete of the familyーa fact that came to be as he’d excelled at various sports such as baseball, track, basketball and football during his time in high school.

As a teen, Brooks attended Thomas Jefferson High School in Northern Virginia and was an active member of various sport teams such as track and field and football. After graduating, he attended Oklahoma State University in Payne County under a track scholarship, where he’d later take part in competitive javelin. Following a few years of studies, Brooks graduated from the institution in 1984 at the age of twenty two with a bachelor’s degree in advertising.

Going after his dream of becoming a recording artist despite his parents’ protests, Brooks eventually relocated to Nashville during the late 80’s for greater music opportunities. After sending out demo tapes to a handful of recording labels, he finally landed a contract with Capitol Records in 1989. 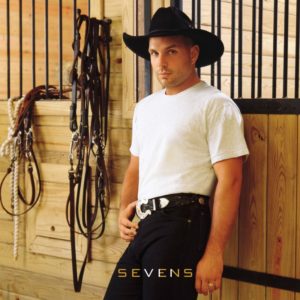 Brooks released his first studio album, Garth Brooks in April 1989. Produced by Allen Reynolds, the album contained ten tracks (eleven in the limited series), including the eventual hit Much Too Young (To Feel This Damn Old). Commended for its content and vocals, the album was met with positive reviews from critics and eventually peaked at number two on the Billboard Top Country Albums Chart and at number thirteen on the Billboard 200 Chart in the United States. Soon a critical success, Much Too Young (To Feel This Damn Old) spawned four singles, most of which would go on to top the charts. Significant in the launching of Brook’s music career, the album has since sold over 10,000,000 copies in the US and has received diamond certification by the RIAA.

Following in the success of his debut album, Brooks released his second studio album at the turn of decade in August 1990. Entitled No Fences, the album featured eleven tracksーmany of which would later become some of his most-well known hits such as The Thunder Rolls, Unanswered Prayers and Friends in Low Places. Recorded at Jack’s Tracks Recording studio, the album topped the US Billboard Top Country Albums Chart and took the number three position on the Billboard 200 Chart. At the receiving end of glowing reviews, No Fences would go on to remain on the latter chart for a staggering 126 weeks. A fast seller upon its release, the album was Brook’s first to have achieved gold status in the UK.

Continuing to work on his music for the next two years, Brooks released his third studio album, Ropin’ the Wind in September 1991. His first CD recorded under Liberty Records, the album debuted at the number one spot on the US Billboard 200 Chart and would later go on to top the Billboard Top Country Albums Chart as wellーmaking Brooks the first singer since Kenny Rogers to have achieved the feat. According to sources, Ropin’ the Wind is also the first country music album to have ever debuted at the number one position on the Billboard 200 Chart, a record which stills hold true today. Spending eighteen weeks at the top of the charts, the album was eventually certified 14x Platinum in the US and 5x Platinum in Canada. Since its initial release, it has sold over 17,000,000 copies worldwide.

The country star released his fourth studio album, The Chase in September 1992. Selling 403,000 copies during the first week of release, the album was critically acclaimed and had debuted at the top of the Billboard 200 and Top Country Albums Chart. Featuring eleven tracks, one of which was a cover of the classic Dixie Chicken by rock band Little Feat, The Chase is considered by the singer himself to be one of the “most personal albums” which he has ever recorded due to the fact that it was recorded during “the most trying time of [his] life.” Warmly received by fans and critics, the album was later certified 9x Platinum in the US and 5s Platinum in Canada with over 9,550,000 sales made around the world.

Throughout the rest of the 90’s, Brooks released three more studio albumsーIn Pieces, Fresh Horses and Sevens, all of which would continue to rise the singer’s already booming celebrity status. 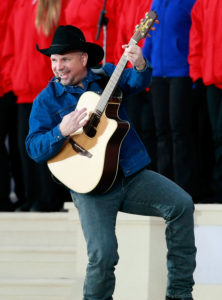 Four years after his last record, Brooks released his ninth studio album, Scarecrow in November 2001. His first album of the new millennium, it debuted at the top of the Billboard 200 and Top Country Albums Charts. Considered by Brooks to be “a real labour of love”, Scarecrow featured twelve songsーa few of which were covers of classic country tunes by various music artists such as Mark Chesnutt and Kevin Welch. Hailed as one of the greatest contributions to country music at the time, the album would go on to sell over 11,000,000 units globally. In 2006, Scarecrow received 5x Platinum certification by the RIAA in the United States.

His next album wouldn’t be released until well over a decade later, in November 2014. Recorded after coming out of his retirement, Man Against Machine was produced under Pearl Records and RCA Records and was initially announced in July of that year. His first album since the beginning of the 2000’s, it was also his first to be made digitally available on his exclusive online store, GhostTunes. Despite the fact that Man Against Machine achieved less sales than his earlier efforts, the album received many positive reviews from music critics who praised it for its “quality which sets it apart from others”. Peaking at the number one position on the Billboard Top Country Albums Chart and at number four position on the US Billboard 200 Chart, Man Against Machine has since sold over 677,000 units in the US, earning it Platinum status. 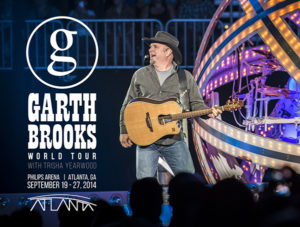 In terms of recent news, Brooks has just embarked on a world tour this Septemberーhis first since his Comeback Tour back in 2014. Travelling and performing alongside wife and fellow musician Trisha Yearwood, the tour kicked off at Allstate Arena in Rosemont earlier this month and has received nothing but positive comments since. A highly anticipated event, the tour was flooded with overwhelming ticket sales upon its launch, prompting additional concerts to be added in a number of cities. Currently scheduled for a total of six legs, the Garth Brooks World Tour with Trisha Yearwood as it is called, will also act to support his 2014 solo album, Man Against Machine. With the North American portion of the tour expected to continue until 2017, fans in other areas of the world such as Australia, South America and Europe may just have to wait a tiny big longer to be able to see the music star up on the stage.

Prior to his travels, Brooks also made the headlines when he offered fans an inside view of the recording studio in a video uploaded onto his official Facebook page. Posted by the singer himself, the clip featured the singer as be walked viewers into the studio, where other music artists were seen busy recording away in front of their microphones. In the video, Brooks talked about some of his latest projects (including the tour) and also took the time to take several questions from fans. Since it was first posted on August 29th, the twenty-four minute clip has been viewed over 1.3 million times.

If you’d like to stay up to date with the country legend, you’ll be happy to know that Garth Brooks is actually fairly active on social mediaーyou can find him on Twitter (@garthbrooks) or on Instagram (@garthbrooks). Or if you’re an avid Facebook user, you can also follow him on his official page at @GarthBrooks!