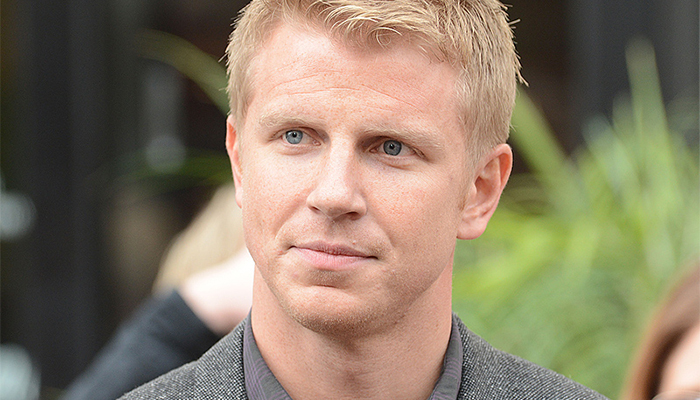 Sean Lowe is most well known for having appeared on the dating reality series, The Bachelorette and The Bachelor. In May 2012, he starred in the eighth season of The Bachelorette as a contestant for an opportunity to be selected by bachelorette, Emily Maynard however ultimately came in third, having lost to winner Jef Holm. The following year, after having earned himself wide recognition and a loyal fan base from being on the show, Lowe auditioned and starred as the bachelor in the seventieth season of The Bachelorーthe original dating series which had spawned The Bachelorette. It is also there where eventually met and married his future wife, Catherine Guidici.

In the original ABC dating series, a single bachelor is presented with a group of potential female interests from which he is ultimately expected to select one whom he feels he shares a chemistry with. Throughout the season, a female candidate is eliminated every week via a unique elimination process in which Lowe offers a flower to those he wishes to remain on the show, and the opposite for those whom he feels that time is up. Towards the end of the show’s seventieth season, it was obvious to audience members that Lowe was smitten with graphic designer, Catherine Guidici. Following the tradition on The Bachelor, Lowe popped the proposal question to Giudici during the finale of the showーwhich the designer almost immediately accepted!

The couple later tied the knot the following year, on January 26, 2014 and have since welcomed the arrival of their first child together, a son named Samuel Thomas. While many “bachelors” before his time on the show have gone down a similar path (having selected and proposed to the winner), many have also ended up ending their relationships after a short period following the end of the show; considering this, it is remarkable that Lowe and Giudici have been able to stay with each other and even start a family togetherーthey are truly the perfect example of a The Bachelor couple.

But what has the former bachelor been up to since his time on the show and his wedding? Has he retired from reality TV entirely? What happened to Sean Lowe? What has he been up to recently? 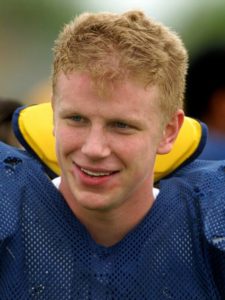 Born on November 16, 1983 in Arlington, Texas, Sean Thomas Lowe is the son of Sherry and Jay Lowe; he has an older ester named Shay. Growing up in the city of Irving, Lowe was raised as a devoted Christian. As a child, Lowe had always had a love for sportsーespecially football. During his time as a student at Irving High School, he was an active member of the school’s football team and had played for them as a linebacker. Besides being an avid football player, Lowe was also a part of the Fellowship of Christian Athletes at the timeーa non-profit Christian sports ministry which was based in Kansas City. Following a few years of playing for the Irving High Tigers, Lowe transferred to Lamar High School, located in his birth city of Arlington, where he soon joined their football team as a linebacker as well.

After graduating from high school, Lowe attended the Texas A&M University briefly for a semester before making the transfer to Kansas State University under a full football scholarship (which was nothing surprising considering his love for the sport). Whilst studying towards his social science degree at the time, Lowe continued to play college football during his time at the universityーhe even took part in the 2003 Big 12 Championship Game held at Arrowhead Stadium. Following his college graduation, Lowe relocated back to the city of Dallas and began to work as an insurance salesman while working as a fitness model on the side.

Sean Lowe on The Bachelorette

In 2012, Lowe made his debut on reality television when he starred as one of the contestants in the dating series, The Bachelorette. Similar to the premise of its parent series, The Bachelor, The Bachelorette featured a single bachelorette and a number of possible male romantic interests from which she would get to know better throughout the course of the season. However while the rules of the show are similar to that of The Bachelor, the format is a little different towards the season’s end as one out of the two final suitors propose to the bachelorette at the end of season for final selectionーto this day, all of the seasons have concluded with a proposal.

As one of the show’s contestants, Lowe starred as one of the 25 possible suitors for bachelorette, Emily Maynard on the eighth season. It premiered on television in May 2012 and continued for 11 episodes, ending in July 2012. While Lowe had a strong start in the reality series, having gained himself numerous fans throughout the show’s air, he was eventually eliminated by Maynard during the ninth weekーhaving earned himself third place, behind runner-up Arie Luyendyk Jr., and the winner, Brad Womack.

Sean Lowe on The Bachelor 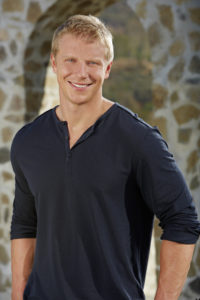 Having gained recognition for his time on The Bachelorette, Lowe later auditioned for its parent series, The Bachelor in late 2012. After having passed the auditions, the former foot ball player went on to star as the bachelor on the show’s seventeenth season, which premiered on television in January of that year. As the original dating game series created by Mike Fleiss, The Bachelor revolves around the premise that a single bachelor must choose a female suitor from a number of possible candidates, whom he gets to know better through various events such as one-on-on and group dates throughout the course of the show. Every week, the pool of contestants also decrease in size as a single member is eliminated by the bachelor via an elimination process.

As the weeks went by, many viewers seemed to notice that Lowe appeared to have taken a liking to graphic designer, Catherine Giudici; it wasn’t long before a relationship seemingly blossomed between the two towards the end of the season. Faithful to the tradition of the show, Lowe later proposed to the brunette during the season’s finale in March 2013, after having introduced her to his family earlier in the series. In the two hour finale episode, the bachelor was seen going down on one knee, holding a three carat diamond ring as he popped the question to Giudici, who almost immediately said yes. 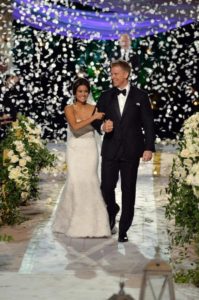 Following the emotional proposal during the seasons finale, the two tied the knot together in a gorgeous wedding ceremony on January 26, 2014. Held at the Four Seasons Biltmore Resort over in Santa Barbara, the ceremony saw many guests including many of the previous couples from The Bachelor including Ryan and Trista Sutter, Jason and Molly Mesnick and Chris Siegfried and Desiree Hartsock. Dressed in a stunning white wedding dress, Giudici was seen teary-eyed as she exchanged vows with to-be husband, Sean Loweーthe entire event having been broadcasted live on the ABC Network.

A week after the wedding, the newlyweds hopped on a plane and was on their way to an exotic week-long honeymoon in the exotic Bora Bora islands. During their time there, the inseparable pair celebrated with champagne, kissed underneath the setting sun and even got to try out various water sports. In a later interview, the couple shared that while they had been inseparable before, they are now truly on a different level after having spent the honeymoon together. Photos of their fairy tale-like honeymoon have also since been uploaded onto the web for fans to see.

After having been together as a married couple for close to two years, Lowe announced in December 2015 via his Instagram account that he and Giudici would be expecting their first child together. A few months later, the couple welcomed their son, Samuel Thomas into the world on July 2, 2016.

Besides having appeared on the dating reality series, Lowe also appeared in the dancing competition series, Dancing with the Stars following the end of The Bachelor. In 2013, he starred in the show’s sixteenth season, alongside dance partner, Peta Murgatroydーwho was the champion of the fourteenth season; Lowe was also the last contestant to have been announced for the season’s cast. However despite a promising start to the show, he was eventually eliminated on May 7, 2013 with Murgatoryd during the eight week; he had ranked sixth overall that season.

In addition to showing off his dance moves, Lowe also made an appearance in the American game show, Celebrity Family Feud alongside his wife in 2015; the two later won $25,000 which was given to a charity of their choice. Other reality shows which the two have participated in include: Celebrity Wife Swap, Marriage Boot Camp: Reality Stars 4 and Who Wants to be a Millionaire. 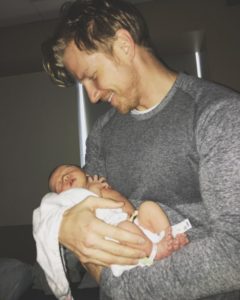 Since the birth of his son, Samuel Thomas in July of this year, it’s no doubt that Lowe has been busy running around as a first time father. No stranger to social media, Lowe has also posted a handful of photos of baby Samuel on his Instagram, including a hilarious one in which he dressed the couple’s bundle of joy up as Chris Harrison, the host of The Bachelorーcomplete with a suit, tie and rose! The photo has since received over 100,000 likes on the reality star’s Instagram and has garnered over 3800 comments. In a later interview, the proud father shared that he was looking forward to forming a close relationship with his sonーwhich he most definitely will, considering how smitten he already is with baby Samuel!

Besides having been busy with fatherhood, Lowe has also gotten involved in his very first acting role in a film called, Bomb City this year. Based on the true story of Brian Deneke in 1997, the action drama movie will focus on a group of punk revolutionaries and the hatred and oppression that they feel in a small, conservative town in Texasーit would ultimately lead them to get involved in one of the most controversial hate crimes in the nation’s history. Written by Jameson Brook, the film will also star actors Rachele Brooke Smith, Ron Lester, Glenn Morshower, Lorelei Linklater, amongst others. In it, Lowe will be playing the role of a character known as Coach Fields. While an official release date has not been released as of yet, it is not unreasonable for us to assume that it will be completed sometime in 2017.

If you’d like to stay up to date with the news surrounding this reality star, then make sure you follow him on social media! You can find Sean Lowe on multiple platforms including Twitter (@SeanLowe09) and Instagram (@Seanloweksu). Don’t forget to visit his official Facebook page as well for the latest news!