The Vermont Butcher Block & Board Company Before Shark Tank

As David Glickman said on told the Sharks, he left a high-stress job in NYC to start The Vermont Butcher Block & Board Company. Would his gamble pay off? Will David win over these investors who seem to be living the life David despises? Let’s take a look.

The Vermont Butcher Block & Board Company on Shark Tank 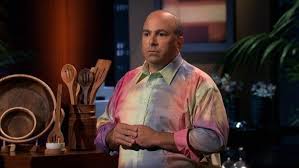 David Glickman walked out into the Shark Tank in an outfit that most people would call unprofessional, which is putting it lightly. He was wearing a red tie, which was fine, but that was the most regular part of his outfit. The rest was a brightly tie-dyed suit jacket and shorts combo., and red sneakers. I guess he wanted to make an impression – and he certainly did that. Kevin and Daymond looked like they were looking at a crazy person, and Mark giggled to himself.  David introduced himself and his company, The Vermont Butcher Block & Board Company, and asked for $400,000 in exchange for a 25% equity stake in the business.

David told the Sharks that the that he makes the most beautiful kitchen accessories, in his opinion. David and his wife moved to Vermont from NYC after leaving high-stress careers. It was at this point that he explained his outfit. David said that he swore he would wear tie-dye for the rest of his life, and would never wear another tie. He stated that The Vermont Butcher Block & Board Company charges premium prices for premium products made from premium materials. David apparently really likes the word premium.

David passed samples out to the Sharks. He handed the first one to Lori, saying “Ladies first.” He told her that she was holding the small cutting board. Robert was next, receiving a cheese board. Kevin got a salad bowl made from a Walnut tree. David passed Daymond another cheese board, while Mark got a salad fork. He asked the Sharks who would like to join him after handling the product, and hearing his spiel.

Daymond asked him what the tie-dye was about. He looked personally offended at David’s fashion choices. David said that it was a real question, even though he had already answered it early. He removed his suit jacket and repeated the story. He told Daymond that he left the “rat race” of NYC, and decided that tie-dye was a sign of freedom for himself. Kevin told David that he didn’t care if he wore tie-dye, he just wanted to know if The Vermont Butcher Block & Board Company was making any money. David told him that it was a great question, and said that he was. David seemed nervous – he repeated himself often.

David told Kevin that the company had sold over $2.9 million. Robert asked him how long that took him to make. David said that he began The Vermont Butcher Block & Board Company in 2004, and at that point, they were selling $800,000. He told the Sharks that he was slated to sell a million dollars worth of product this year, give or take. Kevin asked what David would make on that million dollars. David said that his profit was about 20%. Lori asked what he was doing there if he had sold that much. David stated that he needed money, as well as someone who would help him grow the business.

Daymond went over the facts. David was valuing the company at $1.6 million dollars when he only made $150,000 in profit the year before. David said that the math worked out to 1 ½ multiplied by the sales figures. David said that he has a retail store in Vermont, which serves as a test market for all of the products, high does about $400,000 a year. He makes 10% of his profit on Internet sales, 10 % on wholesale. He also works with restaurants and sells wholesale to Flemings. He said that he’s been in talks with Williams and Sonoma. Daymond smirked, and asked if he had gotten purchase orders from them since he spoke with a William Sonoma 3x at a dice game yesterday. It was a weird joke.

David said that Williams and Sonoma wanted 25 pieces for a collection. His pieces were wanted in retail stores, but The Vermont Butcher Block & Board Company was having difficulties meeting the demand. David said that he has a shop on his land that was nowhere near large enough – he needs to move production to a larger facility. Kevin asked why he would take the focus away from his market advantage, which was being a small production company making chopping blocks from the trees of Vermont. He told David that the other products he makes are made very cheaply in Asia. David agreed but stated that the quality was poor. Kevin countered that even though the Asian products were cheaply made and easy to break, they sold well.

Lori told Kevin that David needed to sell more than just chopping blocks to make money. David said that the cheap ones sell to Walmart shoppers who want to pay $2.99, and walk out. He said that his market share was going to people who wanted to give sweet, thoughtful wedding gifts. Kevin was concerned about the competition with the other products. Lori interrupted Kevin, stating that while she doesn’t usually jump in to speak for the entrepreneur, she need to defend David. She told Kevin that David couldn’t just sell chopping blocks because retail stores want some SKUs with variety.

Robert said that one thing was not adding up for him. He said that normally when people come to the Sharks for investment, it is to lower the cost per unit so they can increase the margin. Robert stated that his margin is already excellent, so he doesn’t understand what David was doing here. David said that he was just looking to expand production. The Vermont Butcher Board and Block company were already profitable. Robert asked what exactly he needed- machinery or staff. David said that they needed space, machinery, and employees.

Lori cut in at that point, saying that she might have a crushing blow that no one else has brought up. She stated that he was competing against a new trend in cutting board call antimicrobial boards. She asked David if he was aware of the trend, and he confirmed that he was. She said the whole point of the antimicrobial boards was to prevent salmonella and other foodborne diseases from leeching into the board. David told her that it did not work that way. He told her that Cooks Illustrated came out with an article stating that plastic cutting boards kept the bacteria on them for longer than wooden cutting boards. Wood apparently naturally cuts down on bacteria. Lori looked sceptical.

Mark told him that he shouldn’t listen to the negative comments. David was profitable and was only looking for the capital investment. He said to him, however, that he did not feel comfortable giving advice about a market he had no knowledge of, and he went out. Kevin said that one of the things he likes about himself is that he’s always right. David did something bold and said that Kevin only thinks he’s always right, which Kevin denied. He didn’t like that His vision for David’s company is different than his. He wanted David to stop concentrating on things like spoons, and focus entirely on cutting boards to become more profitable. David said he disagreed, but Kevin told him that numbers don’t lie. David stated that the numbers aren’t wrong, but Kevin is. Kevin said that the only reason a business exists is to make money, and passion a=comes secondary. He went out, saying that they didn’t agree on the direction of the firm.

Daymond stated that he loves The Vermont Butcher Block & Board Company and David’s passion, but he was not excited about making it grow. He went out. David thanked him for his feedback. David appealed to Robert to make him an offer. Robert said that it was too risky for him to provide a loan for 50% of yearly sales when he doesn’t know enough about the business to provide good advice. He went out. This left only Lori. David told her that he would offer her a larger percentage of the company in exchange for investment. Lori said that she thought the products were beautiful and that she respects what he’s done. But she had to be brutally honest – she thinks that the anti-microbial boards are taking up a larger part of the market. She told him that he was not on the cutting edge of the market, and investment would be too risky. She went out.

It looked like David was not going to leave. He offered Mark 40% equity in exchange for his investment. He told him that he would do all the work. Mark declined, so David appealed to Robert next. He offered Robert 45% before he even had a chance to respond. Robert told him that he did not fell comfortable giving him so much money. David suggested that he goes in with Mark. Mark said that he wasn’t helping himself by begging this way. Kevin’s eyes lit up seeing the desperation in David’s. Kevin asked him if he would give up the spoons, and offer 51%. The other Sharks all told him not to take the deal. David said that he wanted a partner he could grow the business with, and he left, telling Kevin to call him on Monday. 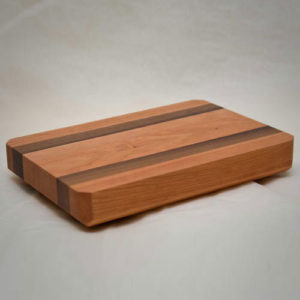 The Vermont Butcher Block & Board Company’s website is still up, but it looks like it has not been touched since just after they went on Shark Tank. The graphics on the home page still say “Watch us on Shark Tank on May 3rd, 2013.” There is a quick nod to Lori’s complaint about the product; a short blurb by David telling customers why wooden boards are better than anti-microbial plastic ones. It seems like they opened a factory store in 2013, and their last update says that they’ve taken on new high profile clients. The last entry in the “latest news” is from November 21, 2013.

There is, however, an update from 2016 on the “About Us” page. You have to go hunting for it. David thanks the Shark Tank for the free publicity and claims that he is flattered that another local business has copied their designs. I was able to put an item in the shopping cart on the website, so it looks as if Vermont Butcher & Block Company’s e-commerce side is still open. Their Facebook account is a little more active. There is a Mother’s Day post from this year. It seems like they switched their focus from online sales to their brick and mortar store.