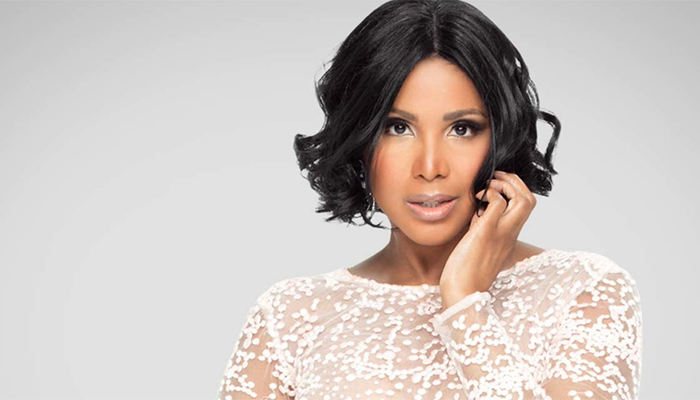 Renowned for her rich contralto vocals, Toni Braxton is considered by many to be one of the best female R&B singers of the 90’s. The daughter of a former opera singer, singing seemed to have been an inherent talent for Braxton, who first began to perform at the church choir as a young girl. After having her talents discovered by chance in the 1980’s at a gas station, she made the decision to pursue a professional career as a music artist. Together with her sisters, The Braxtons signed a recording deal with Arista Records in 1989 and eventually released their first single, Good Life in 1990. Although the record was not a commercial success, it was ultimately significant in helping to kick-start Braxton’s solo careerーwhich later began in 1993 with her debut album, Toni Braxton.

Since the start of her independent music career in the early 90’s, Braxton has released numerous full-length albums over the years including Secrets (1996), The Heat (2000), Snowflakes (2001), More Than a Woman (2002), Libra (2005), amongst several others. Having grown in popularity throughout the decades, the singer has secured many industry awards including seven American Music Awards, five Billboard Music Awards, seven Grammy Awards, four Soul Train Music Awards and a MTV Video Music Award. An established R&B music icon, Braxon has sold over 67,000,000 records worldwide and is currently regarded as one of the best-selling female singers of the 90’s.

Besides her continued success as a musician, Braxton has also ventured into television where she has appeared in a handful of shows as an actress. Some of her projects on the small screen include Kingdom Come (2001), From Toni with Love The Video Collection (2001), Play’d: A Hip Hop Story (2002), Kevin Hill (2005), and The Oogieloves in the Big Balloon Adventure (2012). Moreover, she has also starred in a number of reality and talk shows such as The Mo’Nique Show (2010), Fashion News Live (2011), Big Morning Buzz Live (2011), The Tonight Show with Jay Leno (2013) and Live! with Kelly (2014) and various others. In 2011, Braxton also became a reality star when she was offered her own WE tv series, Braxton Family Values which centred around the lives of her and her four sisters. A big hit, the show is currently on its fifth season after a five year run.

What has the R&B diva been up to in recent times? What new endeavours have she embarked on these past few months? What happened to Toni Braxton? Where is she now in 2018? 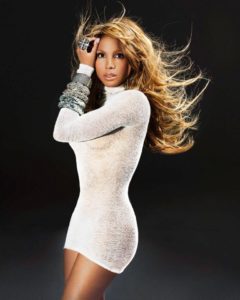 Born on October 7, 1967, in Severn, Maryland, Toni Michelle Braxton is the daughter of Michael Conrad Braxton, a worker at a power company and Evelyn Jackson, a cosmetologist and former opera singer. Part of a large family, Braxton has five siblingsーfour younger sisters named Towanda, Traci, Tamar and Trina and a younger brother named Michael Jr. Growing up in a religious household, Braxton and the rest of her siblings spent much of their childhood as members of the Apostolic Church. Possibly influenced by her mother’s love for singing, Braxton loved listening to tunes as a child and eventually received singing lessons which she’d later put to use at her father’s church choir. Naturally talented in music, Braxton soon began to learn how to play piano and compose her own songs.

As a teen, Braxton was briefly involved with a band but was ultimately forced to quit by her parents as the gigs had sent her home past her curfew. A student at Glen Burnie High School in the Baltimore suburb of Glen Burnie, she took part in various talent competitions and also performed music together with the rest of her sisters. Following her high school graduation, Braxton decided to pursue a career in music teaching and enrolled at the Bowie State University in; however her plans would be cut short after being overheard singing to herself at a local gas station by songwriter, Bill Pettaway. Impressed by her vocals, Pettaway later helped the aspiring singer to land a record deal with Arista Records along with her sisters. 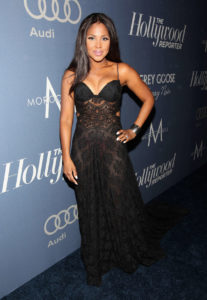 As The Braxtons, the singer and her sisters released their first record together, Good Life in 1990ーit would be their first and last single as a group. While the song did not catch on after its release, it played a large part in the launching of Braxton’s music career. Having attracted the attention of record producers Kenneth Edmonds and Antonio Reid, Braxton who was twenty three at the time, was asked to record a rendition of Love Shoulda Brought You Homeーa song which the two had originally composed for Anita Baker. Moved by her performance, Braxton was signed shortly afterwards to their recording label, LaFace Records.

Breaking out into the music world, Braxton released her first solo studio album, Toni Braxton in July 1993. Recorded over a period of one year, Toni Braxton consisted of twelve tracks, including eventual hits Breathe Again and Another Sad Love Song. Warmly received upon its release, the album debuted at number thirty six on the Billboard 200 Chart and later climbed to top that and of the Top R&B/Hip-Hop Albums Chart in the United States. A commercial hit, the album garnered Braxton a handful of awards including her first three Grammy Awards and two American Music Awards. Since then, over 10 million copies of the album has been sold across the globeー5.1 million of them in the United States.

In June 1995, Braxton released her second studio album entitled, Secrets. Considered to be one of her most successful albums of her entire career, Secrets debuted at number one on the Top R&B/Hip-Hop Chart and at number two on the Billboard 200 Chart, achieving over 170,000 sales during the first week. Praised for her ability to deliver, Braxton’s popularity soon began to rise exponentially after its release. In 2000, the album was received 8x Platinum certification by the RIAA and has since sold over 5,300,000 units in the country. Secrets later went on to spawn four singlesーYou’re Makin’ Me High, Un-Break My Heart, I Don’t Want To and How Could an Angel Break My Heart. 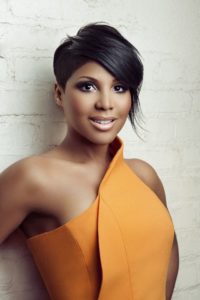 After starring in two Disney Broadway productions during the late 90’s, Braxton released her third studio album, The Heat in April 2000. In contrast to her earlier efforts, the album featured more urban sounds compared to her previous ballads. The Heat included twelve tracks, most of which were written by Braxton and her husband, Keri Lewis. On the charts, the album debuted at number two on the US Billboard 200 and sold over 194,000 copies during the first week of release; it later also peaked at number one on the Top R&B/Hip-Hop Albums and at number three on the UK Albums Chart. Praised for its stylish and confident sounding tunes, the album has since sold over 2,000,000 copies in the US, earning it Double Platinum certification from the RIAA.

The next holiday season, the singer released her first Christmas album, Snowflakes in October 2001. Carrying on with her singing career, Braxton later released her fifth studio album, More Than a Woman in November 2002. Debuting at number thirteen on the US Billboard 200 Chart, the album contained a blend of experimental tracks and ballads which got their sounds from jazz and rock. Met with generally positive reviews from music critics upon its release, More Than a Woman eventually peaked at number five on the Top R&B/Hip-Hop Albums Chart. Producing the hit single, Hit the Freeway the album has been certified gold by the RIAA for having achieved over 500,000 sales.

Following an abrupt departure from Arista Records, the singer signed with Blackgrounds Records in April 2003. Under the new label, she released her sixth studio album Libra in September 2005. A reference to Braxton’s astrological sign, the album opened at the number four position on the US Billboard 200 Chart and at the number two position on the Top R&B/Hip-Hop Albums Chart. However despite having sold over 114,000 units during the first week, its three subsequent singles would ultimately fail to chart due to a lack of support and promotion from Blackgrounds. Nonetheless critics gave the album favourable reviews, and it later received Gold status from the RIAA that November for having sold more than 441,000 copies.

Five years after the lukewarm success of her last album, Braxton released her seventh studio album Pulse in May 2010ーit would also be her first under Atlantic Records, whom she’d signed with after being unsatisfied with Blackgrounds. Made up of eleven R&B ballads and up-temp songs, Pulse debuted at number nine on the Billboard 200 and eventually became the singer’s fifth album to open amongst the top ten. Positively reviewed by critics, the album later spawned three albums and has sold over 156,000 copies in the US as of February 2014.

In February 2014, Braxton released a collaborative studio album with Babyface entitled Love, Marriage & Divorce. At the time, the album was also announced to be Braxton’s final studio album as she’d wanted to retire from music in order to focus on her career as an actress. 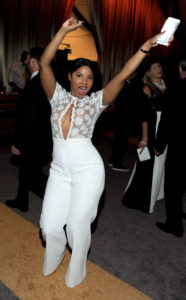 However despite her initial desires to take a back seat in music recording, she ultimately announced in a recent interview this January that she would be once again collaborating with Babyface for a new joint studio album entitled Love, Marriage & Divorce Pt II. A follow-up of their previous project together, the star has revealed that while no actual recording has happened as of yet, the two have been discussing details together regarding the record. While it’s still a work in process, all we can hope for is for it to come out sooner than later.

Besides the upcoming project, Braxton was also recently spotted at the 2016 BMI R&B/Hip-Hop Awards Ceremony this September at the Woodruff Arts Center in Atlantaーwhere she was given BMI’s highest honour, the President’s Award. Hosted by American comedian Chris Tucker, the event saw Braxton in a beautiful white laced up dress as she walked up on stage to accept the award. Other top honourees of the evening included Wiz Khalifa and Charlie Puth, Chris Brown who were awarded the “Song of the Year” and “Songwriter of the Year” titles respectively. Before the night was over, the Braxton sisters also took on to the stage to perform a rendition of Breathe Again.

If you’d like to stay up to date with the American singer and actress, you can do so by following Toni Braxton on social mediaーyou can usually find her tweeting away on Twitter under the handle @tonibraxton, or if you’d prefer photos you can follow her on Instagram (@tonibraxton). Don’t forget about her official website and Facebook page as well!