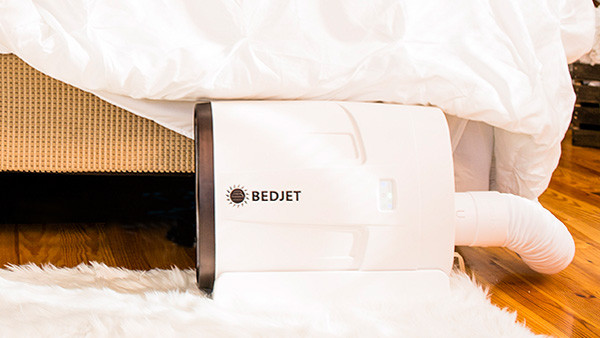 Mark Aramli, from Newport, Rhode Island, is the founder of Bedjet and has come to the Shark Tank to seek an investment of $250,000 in exchange for 10% of the company. Mark starts right away with a demand for the Sharks – never get into a cold bed in the winter ever again. The Bedjet is the world’s first ultra-rapid, and affordable, cooling, heating, and climate control system for just our beds at home. Simply place the unit under your bed, hook the nozzle up, and your bed will be given a luxurious “hot towel out of the dryer” feel in just three minutes. The remote control pairs with the intelligent smartphone app, and you can even program the Bedjet to wake you up in the morning with a blast of cold air.

The Bedjet pays for itself – why heat or cool the whole house, or even that entire room at night? All that matters for 8 hours is what is between the sheets. Mark mentions, if any of the Sharks have cold feet, come on into the Bedjet and warm up. Shark Mark Cuban is curious to try it, as he immediately asks to give it a go once Mark has finished his pitch. Kevin asks how much noise the Bedjet makes, while Mark reassures Kevin that the Bedjet is nearly silent. Mark and Lori step up, preparing to get into the bed, while Lori jokes that she is getting into bed with Mark. Mark and Lori have a hell-of-a-time getting into bed, joking the entire time and lightening the otherwise usually-tense atmosphere of the Shark Tank.

Robert asks if the bed is a waterbed, but Mark explains that the Bedjet is actually injecting air into the mattress to make the sheets a little puffier. There is actually more, Mark says, 50% of couples have different sleeping preferences. While he might like it hot, she might like it cool, but fortunately, the Bedjet has a dual-zone capability. Robert asks how the bed feels, and Lori mentions that her side feels hot, while Mark says that his side is cold. The bedjet is cool on his feet, but the question on Mark’s mind is how does the Bedjet get hooked up? 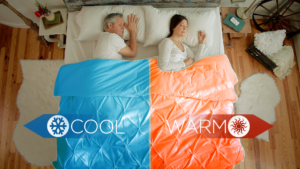 Mark Aramli pulls away some sheets and explains – there is a nozzle that hooks up, and if dual-zone temperature control was required, then there would be a special attachment for two nozzles. Mark Aramli also points out that there is a special sheet for dual zone control, while a singular Bedjet requires only a sling attachment where it then blows out hot or cold air. Robert steps up next and slide into bed with Lori while she asks more questions about the setup of the Bedjet. There is actually a hidden Bedjet underneath Lori’s side of the bed (now Robert’s side, as Lori has scooched over) blowing hot air, showing the device in practical use.

Barb asks about savings since the Bedjet might blow cold air all night, but Mark explains that there is an automatic shut-off timer that can be variable depending on whether you are heating or cooling. Kevin and Mark focus on the business aspect of things, wanting to see if the market actually cares about the product – the first thing the two of them ask about is the sales of the Bedjet. Mark explains that the Bedjet is going into production in six weeks, which means that there no sales yet. Kevin also points this out, and Mark rolls his eyes.

Lori asks how Mark came up with the idea for the Bedjet. Mark Aramli explains that he used to be an engineer on the NASA Space Suit program, and was responsible for designing and creating some of the climate control functions of the suit. Mark Cuban asks how much each unit costs to produce, which comes out to around $98. Bedjet actually has a market test that was performed via Kickstarter, a very popular crowdsourcing program, which sold about $60,000 in units. The price per unit, retail, will be $499, meaning the Bedjet will be more expensive than a typical mattress. All of the Sharks seem distraught by this, but Mark Aramli clarifies. 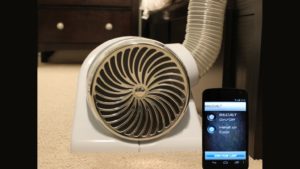 Since the first conceptualization of the Bedjet, Mark attended one of the biggest trade shows in Las Vegas- the trade show was actually for the sleeping product and bedding industry. During the show, something magic happened, and every single player in the bedding industry came up to Bedjet and said that they had been eyeing the product and they wanted it, so they placed a buyer’s sample requests with intent to put the Bedjet technology into a mattress. However, Kevin feels that there is a problem with this – the people going after Mark are the mattress manufacturers. The consumer is more important, as the consumer will walk up and see the $499 price-tag and feel like they can buy an actual mattress (and boxspring, for that matter) for the same price.

However, at the Las Vegas show, Mark Aramli continues, they had signed up retailers who received samples of the Bedjet and put the products into their stores for a sample market. Kevin is curious about the early adopters and carriers of the Bedjet, and Mark explains that he has only partnered with Sit ‘n Sleep. However, Kevin feels that the device will never be sold for $499, while Lori wants to hear what the mattress manufacturers said. Kevin is distraught and will not let any other Sharks talk over him, and he even daringly says, “the devil himself would never pay that price.”

Robert asks how many orders have been placed for the $500 price point, but Mark Aramli explains that they have a P.O (private offering) of $1.1 million dollars from the largest, and oldest, mattress manufacturer in Australia, A.H. Beard. Robert admits this is impressive, while Mark is curious about the “secret sauce” in the Bedjet device. What separates Bedjet from other companies, Mark Aramli explains, is that the Bedjet is the only product that is “ultra-rapid.” Mark Cuban points out that he asked a question, and wants a more technical, realistic answer on why the Bedjet is better than other typical devices. Again, Mark Aramli explains that there is no other device in the world that will make the bed feel like the sheets came out of the dryer in three minutes.

Mark Cuban still has not received an answer on how this happens, and he reiterates his frustration. Mark Aramli finally acquiesces and explains that the Bedjet is the only product to vent convection air into the bed. Mark Cuban points out, the Bedjet is essentially a convection oven that heats or cools and sends the temperature into the bed. Lori speaks up, and says that she had had mattress manufacturers approach him which is the “biggest kahuna;” she asks what the mattress manufacturers’ relationship is with Mark now. Mark Aramli explains, sleep temperature and sleep science is more identifying sleep temperatures as having a deep impact on restful sleep. 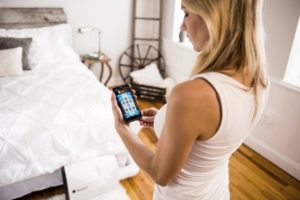 However, Kevin points out that he feels that a wife-and-husband couple would look at the Bedjet, and the couple would look at the price tag and would immediately turn around and leave. Mark Aramli points out there are 300 million bedrooms in America, and Kevin shows more signs of frustration – he understands that the potential market is big, but the reality is that Bedjet has no sales and they cannot see. Lori asks about the mattress manufacturers, while Barb poses another question – Lori says that if she is not answered, then she will exit the deal. Mark looks towards Barb and mentions that he likes her question, and thus, Lori is the first to exit the deal.

Mark Aramli asks if Lori would ask her question again, but Lori points out she asked her question five times and was shouting. Lori replies, no, she will remain out. Mark Aramli then continues on, saying that the product has to be sold in the same location as bedrooms. Mark Cuban then steps in and points out he likes the product, but he had to keep asking about the technology of the product and getting bad answers. Mark is also out.

Barb says that the premium mattress buyer only makes up 25% of all mattress purchases, meaning most beds would not have the clearance space to fit a Bedjet underneath. Barb is also out, finding that she would be unfaithful towards the product. Kevin says that he sees “black clouds, devastation, and a total collapse” – he is out of the deal, although this is needless to include since his strong feelings earlier in the segment.

Robert speaks next, saying he does not have a problem with a price point, and he finds the machine remarkable. However, the pitch fell apart since he does not know if Mark is spending too much time with mattress salespeople, or if he is spending time developing the product. Robert likes the “sizzle,” but he wants to get right into the steak, especially when Mark Aramli worked as an engineer at Nasa. Robert is also out of the deal.

Mark Aramli does not find his investment in the Shark Tank, and the Sharks interrupt him as he pleads to list the name of the retailers he has partnered with, ousting him from the Shark Tank.

Bedjet Now in 2018- The After Shark Tank Update

I always love how some of the worst performers on Shark Tank are eager to display the fact that they were on Shark Tank – do you really want people to go back and see how poorly you did? Anyways, BedJet retains their own website and has successfully launched their Bedjet product, and evidently the BedJet has done so well that they have now introduced a V2. The BedJet V2 is rated with an incredibly strong 4.5 stars across 416 customer reviews on Amazon, which is a great sign – the team behind Bedjet (and probably excluding Mark Aramli) seems to have hit the mark.