Vanilla Ice’s Net Worth – How Rich is Vanilla Ice

When you hear or see the words Vanilla Ice, you immediately think of “Ice Ice Baby.” Vanilla Ice released his memorable one hit wonder in the year 1990.  The song was so popular it earned the honor of being the first hip hop song to reach #1 on the Billboard Hot 100. Since then, the rapper has aspired to recapture the glory of his mega hit by continuing to release albums and songs, but today he has moved on to several new and exciting ventures.

What is Vanilla Ice’s background and how did Vanilla Ice become famous?

Vanilla Ice, real name Robert Matthew Van Winkle, was born on October 31, 1967, in the countryside of Dallas, Texas. Unlike most celebrities, Vanilla Ice did not have the most ideal entrance into the world of fame. As a child, Vanilla Ice never knew his biological father.  When Ice was four, his mother married a car salesman, but his new stepfather’s job required the family to continually travel between states.  As Vanilla Ice grew up traveling throughout the South, he became heavily influenced by hip hop.

During those growing years, Vanilla Ice learned to perform break dance moves with his clique of friends.  His buddies later dubbed him “Vanilla” due to being the only “white boy” in his group of friends. Soon enough, the music they listened to turned into a passion, as the boys became influenced by the growing hip hop movement and rap battles. Eventually, during the waning end of his teenage years, Vanilla Ice wrote the hit “Ice Ice Baby” while attending high school at the youthful age of 16 . Little did he know, it would turn into a huge hit.

Surprisingly, that big hit stayed locked away, as Vanilla Ice didn’t began honing his performance skills until a leg injury from motocross racing.  After the injury, Vanilla Ice had nothing to do but spend time practicing his beatboxing and rhyming skills. With these new skills perfected, Vanilla Ice visited the nightclub City Lights, where he was pegged by his friend, Codename Squirrel. 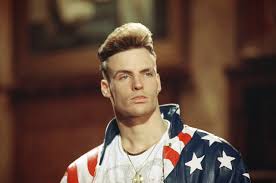 Impressed by his rap skills, the manager John Bush proposed he and his crew (Vanilla Ice Posse) perform regularly and open up for acts at the club. This led to the owner, Tommy Quon, signing a music contract with Vanilla Ice, after being largely impressed by Ice’s rapping skills. Quon would be the reason for Ice Ice Baby’s popularity, which gained a huge following after Quon’s constant distribution to radio stations. Along with the popularity of the highly distributed song, Vanilla Ice appeared in an official music video for the single.

Sadly, Vanilla Ice was later manipulated by his mainstream success, being taken advantage of and later making appearances in films with negative scorings. He was also forced to sign to a record label, dated Madonna for a brief period, and even attempted suicide during his darkest hours.

Luckily, Vanilla Ice later reconnected with Tommy Quon, and this time hired him as his manager. Thereafter, Vanilla Ice got his life back on track, and started to perform less in the music industry. Nonetheless, even after after putting rapping on the back burner, Vanilla Ice is still proud to be releasing music to this day, and can even be seen going on tour with his band.

How is Vanilla Ice’s love life?

As of current, Vanilla Ice is married to a woman named Laura Giaritta.  The couple have been married since 1997, and are happily raising their 2 daughters, born in 1998 and the year 2000.

Where do Vanilla Ice’s 2016 Earnings come from?

Vanilla Ice’s income this year came mainly from his reality TV show, The Vanilla Ice Project, and royalties from his music career.  Ice also participated in house flipping in 2016, which added to this years earnings.

Did Vanilla Ice have any legal troubles during his career?

Yes, several.  As early as 1988, Vanilla Ice was detained and charged with illegal drag racing in Dallas, Texas. Only 3 years later, in 1991, he was arrested in Los Angeles on firearm charges after aggressively threatening a homeless man with assault. Things seemed to smooth out for the rap star for several years, until 2001.  In January 2001, Ice was arrested by police for domestic violence towards his wife.  He would later be arrested again in 2008,  in Palm Beach County, Florida, on a second domestic violence charge for battery against his wife, Laura. Since this was the second time he was charged, the judge ordered Ice to stay away from his wife and visit his children only when necessary. 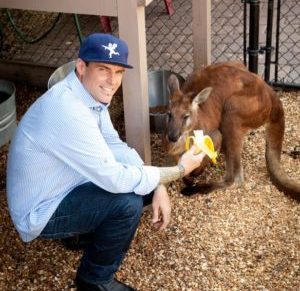 On the less serious side of crime, Ice was also in some hot water in 2004 for failing to secure his rare and usual pets.  In November of 2004, Bucky, Ice’s pet Wallaroo ( think a smaller version of a Kangaroo, but not quite as small the vertically challenged Wallabee), as well as Pancho, Ice’s pet goat, both devised a plan to sneak off of Vanilla Ice’s property.  The police were not amused, and fined Ice for failing to keep his pets confined.

Vanilla Ice’s most recent run in with the law came in 2015.  In February of 2015, Ice was arrested and charged with burglary of a residence, and grand theft, after he removed items from a house he assumed was vacant. As punishment, Ice had to spend time in jail, perform community service, and reimburse the owner of the house for the removed/stolen property and property damages.

With such a huge hit in Ice Ice Baby, has Vanilla Ice ever won any awards?

Of course!  After the release of Ice Ice Baby in 1990, Vanilla was dubbed Favorite New Pop/Rock Artist by the American Music Awards in 1991.  That same year, Ice would also win the People’s Choice Award for Best New Song. 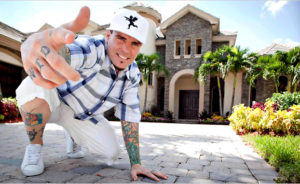 For better or for worse, the awards don’t end there.  Stepping away from the success of Ice Ice Baby, and into new genres of entertainment, in 2011 Vanilla Ice’s hit show The Vanilla Ice Project won an award for Best Home Show by the Factual Entertainment Awards.  Unfortunately, in 2012 Vanilla Ice played a supporting role in comedian Adam Sandler’s 2012 film That’s My Boy.  The role sadly got Ice nominated for “Worst Supporting Actor” at the Golden Raspberry Awards.

How much is Vanilla Ice’s home and where is it located?

Vanilla Ice currently lives in a relatively modest home in Wellington, Florida that is worth about $700,000. The home has 5 bedrooms and 6 baths with an above average 4,000 square feet of living space.  That said, at the height of his celebrity, Vanilla Ice once owned a mansion in Miami worth an estimated $14.9 million!

Does Vanilla Ice have any other hit songs than Ice Ice Baby?

While Vanilla has only one “official” chart topping hit with Ice Ice Baby, many of his later releases are celebrated by his fans.  The song with the greatest following came from his part in the Teenage Mutant Ninja Turtles: Secret of the Ooze’s soundtrack. As part of the film, Vanilla Ice recorded a song called “Go Ninja Go,” which garnered a cult following in the TMNT community for its catchy theme, rhyme, and lyrics.