What Happened to Elton John? 2018 News and Updates 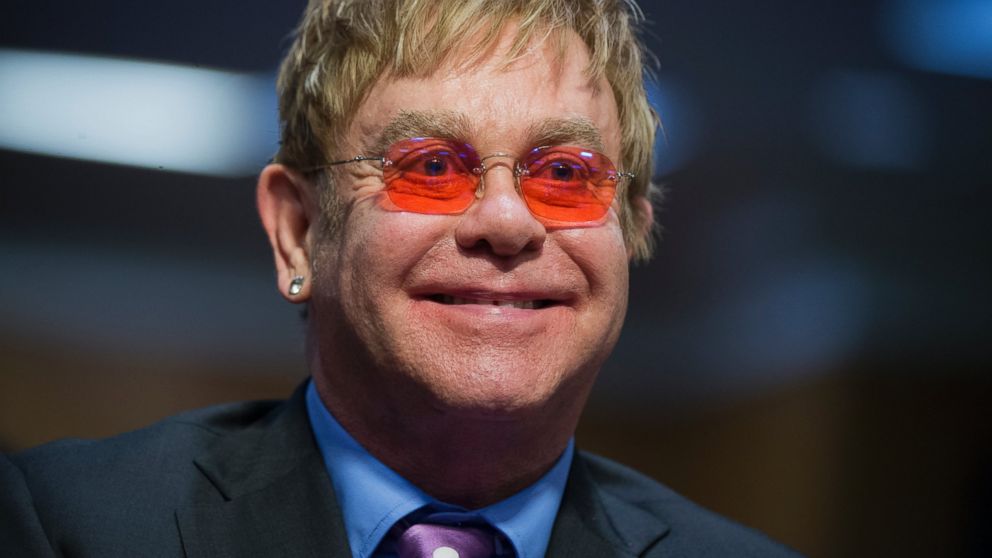 A highly recognized name in the music industry, Elton John is is regarded to be one of the most popular singer-songwriters in the 20th century. Having first learnt how to play the piano at the age of three, it wasn’t long before his parents soon began to take notice of his musical talents. Since his first job as a songwriter at Liberty Records during the late 1960s, John has achieved countless feats throughout his careerーincluding having sold over 300 million records! As one of the world’s best selling music artists, he has also had at least one of his songs listed in the Billboard Hot 100 chart for a stunning, thirty one years in a row.

For his achievements in the music industry, John has also received numerous awards over the years, including five Grammy Awards, an Academy Award, a Golden Globe Award, a Disney Legends Award as well as a Tony Award. A Rock and Roll Hall of Fame inductee since 1994, the songwriter has also performed in a handful of royal events including at Princess Diana’s funeral services in 1997, the Party at the Palace in 2002 and at the Queen’s Diamond Jubilee Concert in 2012. Recognized for his services to the music world, John has also been made a Knight Bachelor by Queen Elizabeth herself, in 1998. In addition to his knight-ship, he was also included in the Rolling Stone’s list of “100 Influential Musicians of the Rock and Roll Era” in 2004.

Openly gay, Elton John has been known to be heavily involved in the battle against AIDS; he would later establish the nonprofit, the Elton Johns AIDS Foundation (EJAF) in 1992, in memory of his good friend Ryan White, who had passed away in 1990, secondary to being infected with HIV from a blood transfusionーsince its inception, the organization has helped to raise over $200,000,000 for those inflicted. An advocate for LGBT social movements, John has also been involved in a number of campaigns, including a collaboration between EJAF and the US government in 2015.

But what has the music legend been up recently? What happened to Elton John? Where is he now in 2018? 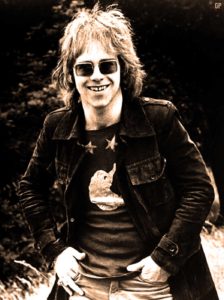 Born on March 25, 1947 in Middlesex, England, Elton John is the son of Sheila Eileen and Stanley Dwight. Raised by his maternal grandparents in a council house, his parents did not marry until 1953ーwhen John was six years old. However despite their marriage, his father often remained distant with the family; with his father having been physically absent in his childhood, John would be brought up majorly by his mother and grandparents. Following a number of repeated arguments and quarrels, his parents later divorced when he was fourteen years old. A few years after, his mother remarried a kind and supportive man named Fred Farebrotherーwhom John would later affectionately referred to as “Derf.”

Having had a knack for music ever since he was a young boy, John began playing the piano at three and was able to play songs by ear by the time he was four. Recognizing his talents, his mother later enrolled him in formal piano lessons when he was seven. Musically talented, John excelled in music classes in school was often said to have performed at various school functions and events. Finding himself wanting to pursue a career in music, much to the dismay of his father at the time, John would go on to enrol at the Royal Academy of Music at the age of eleven. A shining student, the young teen spent the next five years playing classical pieces by Bach and Chopin, and singing in the school choir at the academy on weekends. 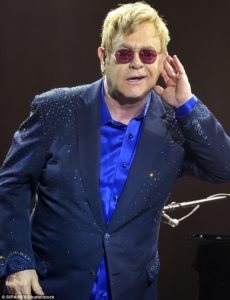 Wanting to chase his dreams of becoming a musician, John soon dropped out of school at seventeen to play with a band called, “Bluesology”ーwhich he had formed with some friends. Working at a music publishing company during the day, the aspiring musician would spend his nights both performing solo gigs at a local bar and others with his band. Having achieved success with his band, the group of friends would later go on tour during the mid 60’s.

After having spent a few years playing with his band, John applied for a position at the American record company, Liberty Records, after having seen an advertisement in the New Musical Express Magazine. Asked to compose music for a set of lyrics by A&R manager, Ray Williams at their subsequent meeting, John would comply and mail the written music to lyricist, Bernie Taupinーwith whom he’d then begin a partnership with. In 1967, the pair would record their first song entitled, Scarecrow during their first meeting. Over the next few years, the duo continued to write songs for numerous artists including singers, Lulu and Roger Cook. 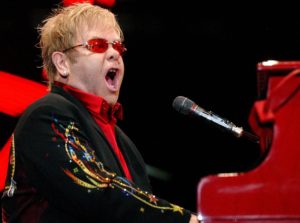 During the late 60’s and early ’70s, the two began to write more composite songs for John to record and eventually release as a single. His first single entitled, I’ve Been Loving You would be released in 1968. Despite not having garnered much traction at the time, he would go on to release a second single entitled, Your Song in 1970. Unlike his initial work however, the record would be a huge hitーhaving ranked on several charts both in the U.K. and in the U.S. As his first successful single, Your Song would later go on to be inducted into the prestigious Grammy Hall of Fame in 1998.

Throughout the rest of the 70’s, John and his partner Taplin would continue to work together in various endeavours, including the songwriting for a 1971 film called, Friends. In 1972, the music composer would release Honky Chateauー it would ultimately be the artist’s first studio album to rank number one in the United States. Over the next fews years, the singer’s sixth and seventh albums would be released, entitled Don’t Shoot Me I’m Only the Piano Player and Goodbye Yellow Road respectively. 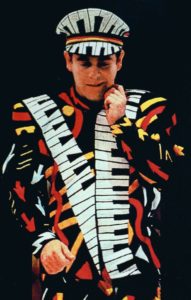 Over the next two decades, John would release a number of albums under his own recording label, including The Fox, Breaking Hearts, Leather Jackets and Sleeping with the Past, amongst others. In 1986, the singer would undergo throat surgery following the discovery of a number of polyps in his vocal cords; despite the benign nature of the growths, the procedure would ultimately result in a change in his voice. The ordeal was later detailed by a television special, created by the Biography channel.

In 1990, the artist would release a ballad named, Sacrifice; a huge success compared to his earlier album, The Fox, it would be John’s first single to reach the number one spot in UK music charts. Fast forward a couple years later and his twenty third studio album, The One would also be put out onto the market. Consisting of eleven tracks, the record received positive reception upon its release in June 1992; it later peaked at the number two spot in the charts for three consecutive weekーmaking it the singer-songwriter’s greatest selling studio album since 1975.

Four years later,  John would be asked to write the songs for the Disney animated film, The Lion King alongside lyricist, Tim Rice. As the second highest grossing movie of all time ($986 million), the soundtrack was highly praised by critics. Three of the songs from the film would later be nominated for an Academy Award, with Can You Feel the Love ultimately being chosen as the winner for the “Best Song” category. That same year, John would also win another Grammy Award for “Best Male Pop Vocal Performance for his recording of the song.

The next Disney project the singer-songwriter took on was the 1999 film, Aida. A musical based on an earlier opera of the same name, John once again worked with lyricist Tim Rice for the composition of the film’s soundtrack. First premiered on the stage in March 2000, Aida would continue running for four years, for over 1,800 shows. Regarded to be one of the best theatre productions that year, it would later win a multitude of awards and nominations including four Tony Awards and a Grammy Award.

Elton John and his Later Career

John would continue to release studio albums throughout the 2000’s and into the 2010’s; some of his works during that period include Songs from the West Coast (2001), Billy Elliot (2005), Lestat (2005) and Peachtree Road (2004). Following years of frequent album releases, the singer would eventually take a prolonged break after the launch of his 29th studio album, The Captain & the Kid, before returning in 2013 for his 31st album, The Diving Board.

In addition to recording, the music superstar has also made a number of performances on the stage in the past decade, including a duet with American singer, Lady Gaga at the 2010 Grammy Awards and again, at the 2013 Grammy Awards with fellow singer-songwriter, Ed Sheeran. In 2012, John also performed at the Diamond Jubilee concert held at Buckingham Palace, in front of the Queen and others members of the royal family. 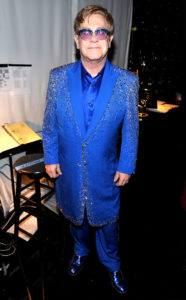 On February 5th of this year, the British singer released his 32nd studio album entitled, Wonderful Crazy Night.   Written and recorded within a span of seventeen days, the album would also be the first to feature Ray Cooper, John’s longtime percussionist since 1995. Having received a numerous positive reviews from critics, Wonderful Crazy Night would ultimately rank sixth on the UK Albums chart and eighth on the Billboard 200 Chart in the United States.

Besides his album work, John has also been busy traveling across North America, Europe and the Middle East to perform for his fans at various countries in the world. First announced in October 2015, the tour was titled, “Wonderful Crazy Night Tour” in support of his latest album. Planned for a total of 73 shows, the tour began on January 13, 2016 at the Wiltern Theatre in Los Angeles and is scheduled to end on December 15, 2016 in Dubai. If you’re a fan, then you’d be glad to know that tickets for his upcoming shows are still available for purchase!

On a fun note, the music superstar was recently featured on the “Carpool Karaoke” segment on The Late Late Show with James Corden. In the eleven minute long video clip, John is seen riding alongside host, Corden through the rainy Los Angeles streets whilst singing to some popular classics such as The Circle of Life from The Lion King and his 1974 hit song, Don’t Let the Sun Go Down on Me. Since it was first uploaded onto Youtube on February 7, 2016, the clip has been viewed over 13,800,000 times online.

If  you’d like to stay connected with the music legend, you can do so by following him on social media or visiting his official website (eltonjohn.com). You can find Elton John on Twitter (@eltonofficial), Instagram (@eltonjohn), or on Facebook (@EltonJohn)ーwhichever you’d prefer using!