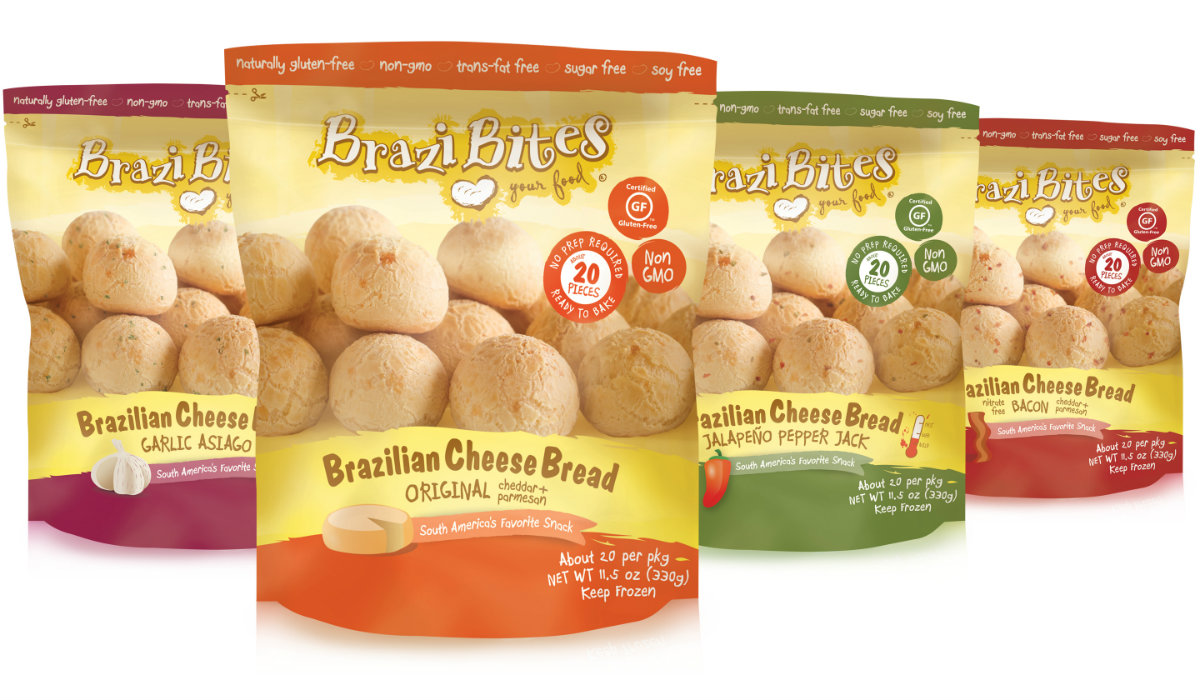 Junea decided to make her family’s secret recipe for Brazilian cheese bread into a full-time business. Would the Sharks be a fan of the cheesy Brazi Bites? Let’s take a look. 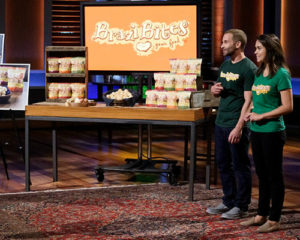 The camera panned to 6 different packs of the Brazilian cheese bread. They look like freezer bags. Cameron said that they had six different flavors that you can bake in your oven. Some of the flavors were original, garlic Asiago, and jalapeno pepper jack. Jr said that their customers couldn’t get enough of Brazi Bites. She asked the Sharks who wanted to join them. Robert told her to bring them on. The rest of the Sharks did not let her finish her statement, they all wanted to try a bite. Junea walked around with a giant tray marked with different flavors of the Brazi Bites. Robert seems to enjoy his, exclaiming that it was so good. Lori had the garlic asiago and appeared to enjoy hers as well.

Juniata explained that instead of using white flour, Brazi Bites use tapioca flour which is naturally gluten-free. The Sharks didn’t seem to hear her they were too immersed in their food. Robert and Lori were very complimentary, but Kevin jumped right into business. You want to know how many calories were in each bite. Junia explains that the serving size was three pieces, and each meal contained 120 calories. She continued saying that the Brazi Bites by its only contains eight ingredients with nothing artificial. They don’t contain any preservatives. Kevin wanted to know if you were able to cook the Brazi Bites in the microwave, or if you had to use in the oven. Junia said that you couldn’t. Because the Brazi Bites are sold as frozen dough, they need to be baked. She stated that the process was not complicated. As she put it, “If you can make frozen pizza at home, you can make Brazi Bites.”

Robert wanted to know how many grocery stores they were in. Junea told him that they were available and 700 grocery stores across America. They were even featured in a couple of big-name stores, such as Sprouts and Whole Foods. Robert wanted to know how they had made that contract, and if they had dedicated sales reps. Junia explained that she and her husband Cameron had done all the legwork herself for those deals. Robert asks them how long ago they had started the business. Cameron told him, but they began three years ago. He continued, saying the Sharks that they had tripled their revenue every year. Their first year Kama they cleared 60000 in Revenue. The next year it was $200,000 and last year they did $600,000. Cameron finished, telling the Sharks that they were on track to do a million dollars this year. Robert Seaman seemed impressed.

Daymond wasn’t sure if he could add any value to the business. They were already doing very well, and he thought that they would continue to grow in the Whole Foods Market. Daymond’s suggested selling online, where they could get a full margin. Kevin looked confused asking if they would ship it Frozen. Kevin thought it was a bad idea. Daymond thought that he could provide value by linking them to another business, but he just invested in. That company was already making millions of dollars, and selling very well on QVC. They had all of the groundwork and place to sell food on an online basis. They also had an extensive customer base. Daymond said that his time who’s worth more than 10%. He wanted 25% of the company in exchange for the 200000 dollars that they were asking for. Cameron asked him if that was an official offer, and Daymond said that it was.

Cameron thanked him for the offer. He wanted to see if there are any other offers on the table. Kevin stated that he would do $200,000 in exchange for 20%. Lori indicated that she was considering making an offer as well. She recently invested in a business that made stuffed Bagel balls. She was concerned the Brazi Bites might be competition for that business, or if she would be able to make it integrate with each other. Lori ask them to tell her what the difference was between the two companies. Junea looked stumped. Cameron jumped in and told Lori that the difference between Brazil bites and the stuffed Bagel Company was that Brazi Bites word gluten free. Lori said that that was right on the nose. Robert told them that they answered well. Daymond stated that he was nervous for them.

Lori decided to make it interesting, and offer the same 25% in exchange for the $200,000 that Daymond was doing. Kevin said that he wanted to make it interesting, and dropped his Equity asked to 15 percent. he stated that he want to put pressure on Daymond and Lori. Robert made a terrible pun, and told the couple that they had a Feeding Frenzy for their Brazilian bites. The other Sharks looked at them expectedly. the announcer reminded everyone that none of the Sharks have gone out yet, but only three of them had made offers. Junea want to know more about Kevin’s vision for their company. He had offered the money but had been silent on how he wanted to help them expand. Kevin said that he saw their strong suit as being able to get into standard groceries. Lori cut in, and stated that she saw them going after more of the natural and organic food places. This would help them make a strong brand. Once they were able to have brand recognition in the natural areas, it would make going into regular grocery stores easier because people would already know the name.

Daymond wanted to know if they had get out on the company. Cameron told him that they had to take out a loan in order to build their production facility. Mark asked them how much debt they were in at the moment. Cameron said that the debt was about $200,000. Cameron continued, stating that they were going out of production and would be selling off a lot of their equipment. That would redo a lot of the cost. David wanted to know why they were transitioning out of manufacturing the products themselves. He asked them if they had found a good co-packer or a partner to work with. Cameron said that they did have a co-packing partner that they were going to work with. Daymond wants to know if that co-packer was also going to own part of the company. Cameron admitted that the co-packing partner had also made an investment in the enterprise. Came and asked how much the investment was for, and Cameron told him that they have a 50-50 investment with that partner.

The Sharks look surprised. Diamond ask them if they only own 50% of the company. The couple admitted that this was true. Cameron told the Sharks that the partner had made a multi-tier investment that involves the line of credit as well as cash, and they’re also building the production facility. He said that they were ordering custom equipment from Brazil. Robert stated that he had enjoyed the food, but the deal fell apart for him when they told him that they only own 50% of the business. He didn’t know this other partner and therefore did not trust him. Robert went out. The pair thanked him.

Mark went out next. He said that the risk-reward factor was just not enough for him. the couple thing to end as well. Cameron addressed the remaining Sharks and told them that he knows how much they would bring to the table but 25% was more than they would be willing to part with. He seem to be ignoring Kevin’s offer. Robert told them to make a counteroffer. Lori said that they had made a mistake coming into the Shark Tank after having given away 50% of their business. She told them that it made it very difficult for them to negotiate. Junea didn’t respond, instead asking Laurie if she would be willing to match Kevin’s 15% Equity ask. Kevin said that he would be prepared to drop his offer to 12 and a half percent to make it more attractive. Cameron had the guts to ask Kevin if he would just go to the original asking bad for 10%. Kevin said no, but he would be willing to do the 12 and a half percent. Lori stated that that was that question was just what he deserved. Lori indicated that she might be ready to do 20%.

Robert told the pair that they need to make a decision soon. Do you need ask Lori if the 20% was her final offer. Kevin cut in, stating that the 12.5% was as low as he was willing to go. Daymond said that he would match Lori’s offer at 20%. Lori said that you’d be ready to go to 18%.  Cameron and Junea discuss it amongst themselves, and then asked Laurie if she would be willing to go down to 15%. Lori shook her head. Lori told the pair that she was worried. Junie and tried explaining that she had nothing to be concerned about because they were already a successful brand.

Lori said that she knew that they were successful brand already, but she was concerned about the challenges that they still had to go through Lori stated that she would split the difference between the 18% and the 15%. she made the offer for $200,000 in exchange for 16.5%. Kevin and Daymond both went out. Junia told Lori that she had a deal. As she hugs the pair, Lori told them that she was surprised that the snack was gluten free. Since they were so delicious.

Brazi Bites Now in 2018 – The After Shark Tank Update 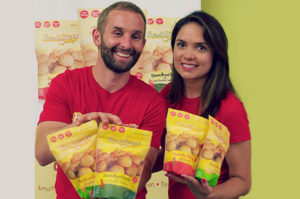 It’s only been a few months the couple team behind Brazi Bites was able to make a Shark Tank deal with the Queen of QVC. Let’s take a look at how they’re doing. Since making that deal, Brazi Bites have expanded into selling their delicious cheese bread in their online store. They are even available in a few select Costcos. According to their social media sites, the packaging has changed to a brighter more accessible look. It sounds like Brazi Bites are doing well and I can’t wait to try them!