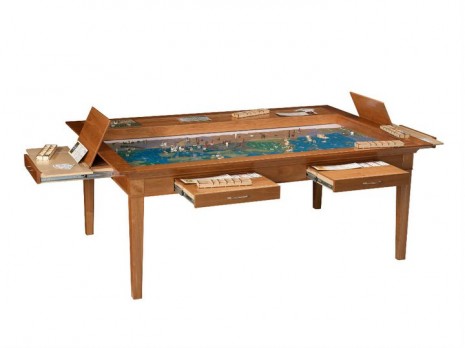 Robert Gifford has traveled to the Shark Tank to represent his company, Geek Chic. Robert is searching for an investment of $100,000 in exchange for a 5% stake in his company, which is an outrageous evaluation of nearly $2 million dollars. So, Robert is evidently a geek, as can be seen in his appearance, but as a geek, he is compelled to define that nebulous word. A geek is simply someone who is obsessively curious about one or more topics, and this obsession leads us to become engineers, doctors, and – looking to Mark – software moguls.

Geeks bring that same obsession to their hobbies and entertainment, such as board games, video games, action figures, and comic books – these are just a few of the things bought mostly buy adults. Robert takes a breath to gather himself before moving forward; his wife simply tolerated and put up with his hobby. His wife tolerated the table-top gaming on the dining table and the dozens of controllers in baskets under the coffee table, and white cardboard boxes from Comic Wednesdays. Robert could see that he was aggravating her, in a rare moment of martial insight, and he realized that she deserved better.

So, Robert began to design beautiful, geeky furniture that would be welcome in their home. Robert then had a startling observation that everyone deserves better, and this is where Geek Chic was founded.

Standing next to Robert is a wooden table, made of black walnut. This is a typical 3 x 5 table but like most geeks, this is more than meets the eye. Robert reaches down to press a button which releases the boards covering the top of the table, revealing a polished surface underneath that is perfect for tabletop gaming. Robert explains, this surface can be used for card games or board games or anything that you want to do in progress and store it. There is also a drawer that forms into a desk, which is a perfect area to get work done or to run a roleplaying game. 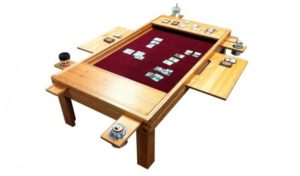 There is also a rail that can attach to the receptacles underneath the table, which is perfect for storage on the side. These receptacles can store player items, like dice or equipment sheets, and there are even some receptacles that are specific for things like wine glasses and beer bottles. The configuration opens up; geeks, by accident, or design, are shaping the world, and Geek Chic is here to revolutionize the way geeks use their spaces. So, Robert asks, what do the Sharks need to know in order to become part of Geek Chic? Robert Herjavec simply laughs, as a nerd himself.
Lori asks if the table is the only product, but Robert explains that the table is one of 19 different pieces of furniture that they have. There are chairs and cabinets and tables as well, and as Robert explains, Robert Herjavec and Lori get up to play around with the table. Lori asks if the table can be customized, so for example, it could be a poker table or a craft table or whatever the user decides to order. There are actually two examples in the table, Robert explains – there is a wet and dry surface, and a glossed surface. The glossed surface is great for making maps or sticking things to, and the wet/dry surface is more appropriate for playing cards or stacking poker chips.

The tables run for $3,500 roughly, and Mark Cuban asks about the sales. Robert reveals the fact that Geek Chic did a shocking $2 million in sales last year, which causes Kevin to nearly snap his own neck from turning his head so fast. Robert Herjavec and Daymond are both blown away. Lori asks about the profit, but unfortunately, Geek Chic ran a $100,000 loss. Kevin then says that he knows what furniture makers are worth, five times their free cash, but Robert does not have any free cash flow. Why is Geek Chic worth $2 million? However, Robert feels that his company is worth more.

$2 million is what they did in the last fiscal year, and projections for this upcoming fiscal year would be $400,000 to $500,000. With the investment from the Sharks, Robert intends to buy a truck to enable the company to run their own logistics, and even look into purchasing more advanced machinery. The average order is for about $4,500 worth of products, Robert explains. Mark asks about the profit margin on the table, and Robert estimates that is around a 50% split; each table yields about $1,800 in profit.

Kevin then says that the furniture making in the United States has been all but destroyed due to sending parts to Asia, so why is Robert not a “dead geek?” Robert explains that they are attempting to minimize the cost, but Asia cannot make the same quality of product out of American wood that is made in the United States. Lori admits that she thinks the product is great and she loves Robert’s enthusiasm, but she has ultimately seen a lot of similar tables. She does not know how Robert can get the competitive edge since some tables are very high end, so Lori is the first Shark out of the deal. 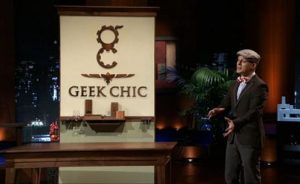 Robert Herjavec then asks the other Robert if he wants to sell a lot of people, or if he wants to focus on a niche; grow to $10 million in sales, and keep it at that. However, Robert says that he wants to sell to more than just geeks, as people look at the table and mention how nice it is. However, Mark Cuban admits that he only sees it as a table and does not see the functionality of it, and that is where the disconnect comes into play; when he invests in a business, he has to be able to dive in with passion. If there was Geek Chic in another direction other than furniture, Mark would be interested. Still, Robert points out that the furniture is just beginning, but ultimately, Mark is out of the deal.
Robert Herjavec explains that he differs from Robert’s vision; he wants to be a big furniture guy. Nerdy Robert then says that he wants to be a big company, and Robert Herjavec replies that he buys into the design of the table, but not into the furniture company part of it. Robert is also out of the deal.

Kevin says that he has a story about biology class; he remembers counting fruit flies through a microscope and after counting about 100 of them, he found one that was white, instead of black. It was clear white, so he held it up to the teacher and said, “what is this doing with the rest of my fruit flies?” The teacher replied, “that’s an anomaly.” Kevin explains that Geek Chic is that anomaly; he has made it so far but if he continues to put up resistance, he will end up dead like the other fruit flies in the petri dish. Kevin feels that Robert should not raise any money or give up any equity and settle for being a happy fruit fly, so Kevin is out of the deal.

Daymond is the final Shark left in the deal, and he explains that he may not have the same vision. Still, he is in love with the table and is in love with how Robert is running the company. Daymond reiterates the offer, $100,000 for 5%, then offers $200,000 for an exchange of 25% equity. Robert explains that he made the evaluation by counting on the value that another Shark could bring by partnering. Robert counter-offers $500,000 in exchange for 15%, which values his company over the previous $2 million.

Daymond explains that he is finding a flaw in Robert’s character, but Robert says that it is not a flaw. Robert Herjavec asks if the Nerdy Robert is even considering the offer, but he says that he is not. Daymond’s ticket to enter, he explains, is his time and money; he stays firm at $200,000 at 25%. This is still a tad too high for Robert, and Mark points out that this boils down to a yes or a no.

Lori and Mark spur on Robert, advising him to be true to himself. However, Robert Herjavec quickly says that he will offer more cash, and he re-enters the deal; the show dramatically cuts to commercial. Upon the return, Shark Robert points out that people overvalue something that is beautiful and rare, and that is what he likes. Daymond asks if Robert “jumped in on his geek,” which causes the Sharks to laugh.

Kevin sums up the situation, pointing out that Robert jumped back into the deal. Robert then asks if Daymond can match Robert’s offer, but Daymond says that he cannot; that is what his time is worth. In the end, the pair of Roberts find a deal, with Nerdy Robert securing a deal of $300,000 in exchange for 25% equity in the company.

Geek Chic Now in 2018- The After Shark Tank Update

As can happen on Shark Tank, deals are not final and are contingent on both parties ultimately agreeing; ultimately, both Roberts did not see it fit to form their Robert alliance, and thus, Herjavec is no longer an investor or part-owner of Geek Chic. Now, Nerdy Robert is fully on his own, and without a Shark, it still appears as though Geek Chic is doing incredibly well.

Now, Geek Chic has a variety of different products ranging from dining tables for gaming to coffee tables for gaming, all the way down to gift options, seating, and even gaming accessories. The cheapest tables, which are the coffee tables, begin at fairly high prices, with even a coffee table stool requiring a deposit of $125 before the order can even be placed. The next most expensive models are the dining room tables, and the final most expensive products are the game room tables, which look the best.

All the tables require deposits before they can be made, as items are now completely customized and made-to-order for each order. This may not be good and can indicate that the business is growing weak, or it can be a bait-and-switch tactic by luring in people with a $100 to $500 deposit, while the full table can cost upwards of 10 times that much.

Still, Geek Chic furniture looks sleek and sexy, and the smaller gift options (such as the entropy engine and leaf block, which are useful for table-top gaming and even potential card games like poker) are a worthwhile thing to check out.