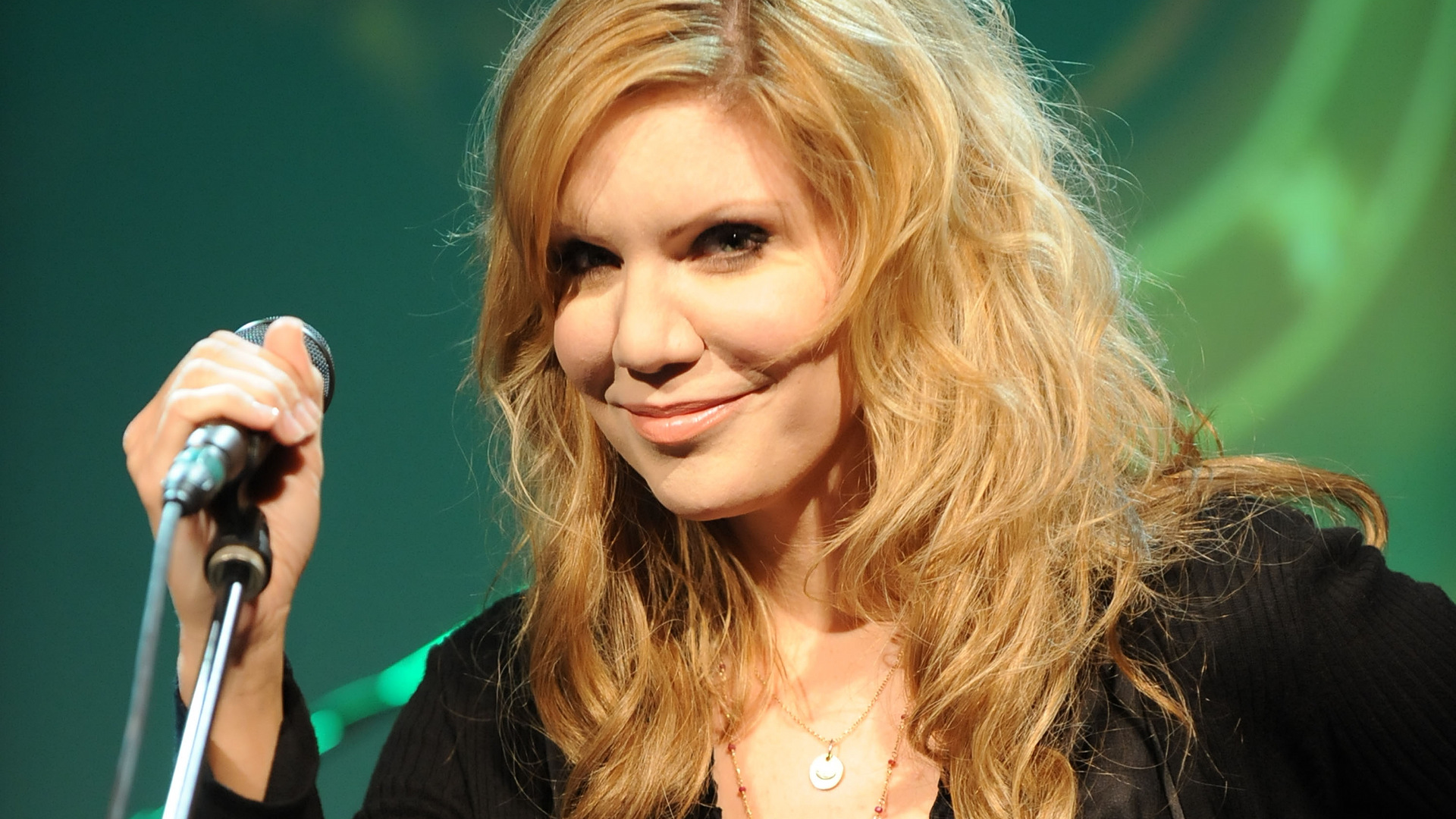 Alison Krauss is a well-known American singer who rose to fame after the release of her solo album, I’ve Got That Old Feeling in 1990. Specializing in country and blue-grass tunes, Krauss recorded her first song at the age of fourteen after landing a recording deal with Rounder Records in 1987. A well recognized singer in the industry, Krauss has released over a dozen albums and over thirty singles throughout her professional caree; she is also accredited for helping to renew the genre of bluegrass in the country. With her popularity eventually rising after her debut, she released many records over the next years including Different Strokes (1985), Too Late to Cry (1987), I’ve Got That Old Feeling (1991), Forget About It (1999). Besides her successful solo career, she is also a part of Union Station, a country band which consists of herself and five other members.

But music isn’t all that she’s worked withーKrauss has also appeared in a small handful of television series. Some of her works on the small screen include Annabelle’s Wish (1997), Down from the Mountain (2000), Eight Crazy Nights (2002) and Sesame Street (2005), amongst various others. A renowned celebrity, the singer has also been a guest in numerous reality and talk shows including Late Night with Conan O’Brien (2005), Heaven and Earth with Gloria Hunniford (2006), Later…With Jools Holland (2011), Ellen: The Ellen Degeneres Show (2011) and The Tonight Show with Jay Leno (2011). Krauss has even voiced a character in The Simpsons in 2012!

So what has this multi-talented individual been up to since? Has she been recording any new songs? What happened to Alison Krauss? What has she been doing these past couple of years? 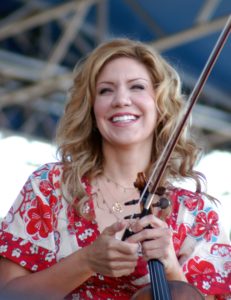 Born on July 23, 1971, in Decafur, Illinois, Allison Krauss is the daughter of Louis and Fred Krauss. She has an older brother named Viktor who currently performs as a bassist; she is of German and Italian descent. Raised in the small town of Champaign, Krauss began taking classical violin lessons at the tender age of five, however would ultimately switch to learning bluegrass shortly afterwards. Encouraged to embrace music as a young girl by her parents, Krauss would later accredit her mother for her eventual career as a recording artist.  Showcasing her musical talents, she participated in a variety of local talent competitions and events during grade school and eventually was part of her own band by the age of ten.

Continuing to perform, she later won the Fiddle Championship at the Walnut Valley Festival in 1984 and was soon given the title of “Most Promising Fiddler in the Midwest” by the Preservation of Bluegrass in the United States. Having befriended fellow musician John Pennell during her time at the local festivals, the duo eventually founded a band called Silver Rail when she was twelve years old; the group’s name would later be changed to Union Station. Chasing her musical dreams, Krauss continued to perform and write songs on the side as a teen until she eventually landed a recording contract with Rounder Records at the age of sixteen. Under the label, she would release her first solo album entitled Too Late to Cry in 1987 with Union Station playing the backup instrumentals. 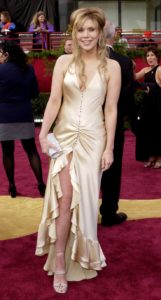 Two years after her debut album, Krauss released a full-length album with her group, Union Station. Two Highways was officially released in 1989 and consisted of twelve songs including I’m Alone Again, Wild Bill Jones, Beaumond Rag, Heaven’s Bright Shore and the title track, Two Highways by Larry Cordle. Together with fellow bandmates Jeff White and Mike Harman, the three were in charge of the vocals while John Pennel played the bass and Jerry Douglas played the dobro. However despite the efforts put into the project, Two Highways would ultimately not chart in the US.

Undiscouraged by the lack of success, Krauss went on to release her next solo album entitled, I’ve Got That Old Feeling in July 1991. Met with favourable reviews upon hitting the stores, the album would be the singer’s first record to chart in the USーhaving eventually climbed up to the number sixty-one position on the US Billboard Country Albums Chart shortly after its release. A big step forward for the singer’s budding music career, I’ve Got That Old Feeling would also go on to net Krauss her first Grammy Award in 1991 for the category of “Best Bluegrass Recording”.

On Valentine’s Day the next year, the singer released a second album with her band, Union Stationーhowever this time, the group consisted of new members Ron Block, Barry Bales, Tim Stafford and Adam Steffey. Featuring fourteen tracks, Every Time You Say Goodbye was recorded over a period of a year in Nashville TN and later peaked at number thirty-four on the US Billboard Top Heatseekers Chart and at number seventy-five on the US Billboard Top Country Albums Chart. Praised for its vocals and content, it would win a Grammy Award for “Best Bluegrass Album” in 1993.

In March 1997, Alison Krauss & Union Station released their third album, So Long So Wrong. Their best-performing album at the time, it peaked at number four on the Billboard Top Country Albums Chartーa staggering improvement from the seventy-fifth position of Every Time You Say Goodbye in 1993. Described as “untraditional” by critics, the bluegrass album contained fourteen songs including No Place to Hide, Deeper Than Crying, I Can Let Go Now and Little Liza Jane. Securing the number forty-five position on the US Billboard 200 Chart, the album later won the group three separate Grammy Awards for “Best Country Instrumental Performance”, “Best Bluegrass Album” and “Looking in the Eyes of Love” in 1998. It soon received gold certification for selling over 500,000 copies across the country.

Towards the end of the 90’s, Krauss released her third solo-album (and eighth studio album overall) under Rounder Records in 1999. Forget About it as it was titled, would undoubtedly be the singer’s most successful solo album to date. Consisting of eleven tracks, Krauss performed the main vocals of the songs while the instrumentals and backup vocals were provided by her friends in Union Station. Well-recieved upon its release, Forget About It quickly peaked at number five on the Billboard Top Country Albums Chart and at number sixty on the Billboard 200 Chart in the US. In Canada, the album was also a commercial success, having swiftly climbed up to the number five position on the RPM Country Albums Chart. 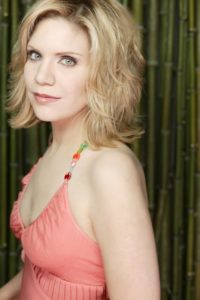 In August 2001, Krauss and Union Station released their fourth studio album entitled, New Favourite. Even more successful than the group’s earlier album, the songs peaked at number two on the Billboard Top Bluegrass Albums Chart and at number three on the Billboard Top Country Albums Chart. Critically acclaimed, it later also reached the number thirty-five position on the Billboard 200 Chartーthe best performance which the group had achieved at the time. Regarded as a highly influential piece for bluegrass in the US, New Favourite would go on to win three Grammy Awards that year for “Best Country Performance by a Duo or Group with Vocal”, “Best country Song” as well as “Best Bluegrass Album”.

Gaining widespread attention as recording artists, they released their fifth studio album, Lonely Runs Both Ways in November 2004ーit was also their first to be made available via online download. In a later interview, the group would admit that Lonely Runs Both Ways was in fact, ” recorded and chosen as needed” rather than having been planned out beforehand, a contrast to their previous albums. With fifteen tracks, the album successfully peaked at number one on the Billboard Top Bluegrass Albums Chart and settled in at number six on the Billboard Top Country Albums. Rated four stars by Allmusic, the album would ultimately receive three Grammy Awards and a Gospel Music Association Award.

Following Lonely Runs Both Ways, it wouldn’t be until 2011 that the team would release a new album. Released in April that year, Paper Airplane included eleven tracks some of which were cover renditions of Richard Thompson and Jackson Browne’s tunes. Selling close to 83,000 copies in the first week, the album was a commercial hit and debuted at number one on both the Billboard Folk Albums and Top Bluegrass Albums Chartーto date, it remains to be Krauss’ best album on the Billboard 200, where it opened at number three. Receiving nothing but good complements, Paper Airplane won two more Grammys for Krauss and Union Station including ones for “Best Engineered Album” and “Best Bluegrass Album”. 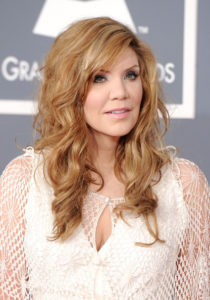 Last year, Krauss went on stage for a number of public performances including an exclusive one-night concert at the Grammy Museum called “Lead Belly at 125: A Tribute to an American Songster”. Celebrating the artistry and works of American folk legend William Ledbetter, the musical evening brought together many big names in the music industry including Robert Plant, Buddy Miller and Alvin Youngbloodーeven Krauss’ older brother Viktor made an appearance! Following that, she also took part in the once-in-a-life-time concert, “Outlaw: Celebrating the Music of Waylon Jennings” at The Moody Theatre in Austin, Texas as a music performer.

More recently this January, Krauss was one of the many music artists who performed in honour of Willie Nelson who received the Gershwin Prize for Popular Song, a prestigious lifetime award given by the Library of Congress. Other music stars present at the ceremony included Neil Young, Rosanne Cash, Leon Bridges, Edie Brickell, as well as Promise of the Real. Speaking of special performances, she was also featured as a special guest at Nelson’s Fourth of July Picnic this past Independence Day. Held at the Austin360 Amphitheater, the picnic saw many other performers including Brantley Gilbert, Jamey Johnson, Kris Kristofferson, Shakey Graves, amongst many others.

If you’d like to stay up to date with the celebrated bluegrass-country singer, then you can do so by following her on social mediaーyou can find her on Twitter (@AlisonKrauss) or on Instagram (@AlisonKrauss). Make sure to visit her official Facebook page (@OfficialAlisonKrauss) and website (alisonkrauss.com) as well for the latest news on the star!