Before appearing on the first episode of Shark Tank, Kevin Flannery was attempting to build a nice life for his family. He did not have a family growing up, and wanted to provide for the one he made for himself. Flannery did this by founding WiSpots, a business that would rocket him into debt, and cause him to take out two mortgages, and drain his children’s college fund, as well as his 401K. Would Flannery get an investment from the Sharks, or continue to take money from his and his children’s future? Let’s take a look. 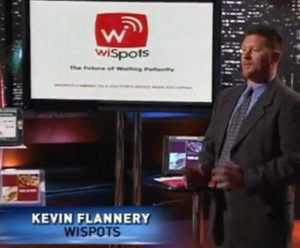 In his introduction video, Kevin Flannery introduced himself, and his company WiSpots. He showcased his home office, which was also a playroom for his young daughter. Flannery explained that he was a former Marine, and he has been in wireless technology field for about 20 years. He said that he quit his former job in order to focus on his business, WiSpots. As the video showed Flannery greeting his daughter at school, he told the audience that he funneled money into the company via mortgages on his home, which he had to put up for sale because he could no longer afford the two mortages he had taken out. The video showed Flannery tearing up as h relayed that information. It cut to a scene of the Flannery family saying grace over a meal. Kevin said that he had spent much of his life in foster homes and it was important for him to take care of his family.

The video cut off, and Kevin Flannery walked into the Shark Tank in a suit and tie. He introduced himself to the Sharks, as well as WiSpots. He refered to the tagline of the company, which was “the future of waiting patiently.” Flannery thanked the Sharks for allowing him to “take a dip in their tank,” and made a awkward joke about hoping that they don’t bite. This did not get a laugh from the Sharks – they all stared at him stocially. He told them that he was seeking $1.2 million in exchange for 10% equity in the company. The Sharks all looked shocked, and Kevin O’Leary told him that he’d better be doing well to ask for that much money. Flannery stammered, and continued.

He told the Sharks that WiSpots was a business model that has been involved in research and development in healthcare and education, as well as a retail space for over 6 years. Robert wanted to know what exactly the product was, and Flannery explained that it was an interactive patient center. He gestured over to the televisions and tablets set up on the stage. Flannery explained that patients could pick up one of the tablets, which he called a “wireless web pad,” and fill out surveys, check in to the office, sign up for clinical trials, and surf the web. When the patients were called into their appointment, they would place the web pad back into the charging cradle. Flannery said that WiSpots was a revenue source for the doctors without really explaining how.

O’Leary interrupted the presentation, and asked Flannery who would be paying for the WiSpots. Flannery told him that media buyers, advertisers, and pharmaceutical companies would all be footing the bill. O’leary had a follow-up question about the price of each installment. Flannery said just under $10,000 and Robert whistled. O’Leary seemed suprised. Flannery told him that the doctors pay the priced of installtion. Robert said that Flannery would never get doctors to pay that price, but Flannery insisted that he already had contracts in place. Robert asked if the doctors already paid, but Flannery told him that they just signed the contracts. He stated that there was a catch – advertisers and media buyers only wanted to pay for ads that people were actually watching. Barbara interrupted him, wanting more of an explanation. She stated that what she understood so far was that the doctors were signing contracts, and then waiting for the advertisers to purchase ad space.Flannery got flustered, and said that the doctors don’t pay WiSpots until they fill a certain number of ad real estates.

Robert changed the subject, and asked Flannery what else bored and frustrated patients could do to surf the web or check their email. Flannery mentioned that patients could bring in their laptop, but it was bulky and cumbersome. Robert pulled out his bulky 2009-era smart phone, and sarcastically asked if there was perhaps another option for patients to use to check their email. Flannery insisted most doctors offices require patients to turn their phones off when they walk though the door, and it was about more than just email anyway. Barbara wanted to know if Flannery had put any of his own money into the company, and he told her that he put in over $550,000 of his own. He started to tear up, and explained that he used his kids college funds, took out two mortgages on the house, leeched from his retirement funds, and ammassed a mountain of debt on his credit cards.

O’Leary stopped him, and tolf Flannery that he was going to do him a big favor. He stated that he thought of his money as soldiers that he sends out to war on a daily basis with the intention having it take prisoners, and return to base. This way, his wealth is always growing. O’Leary accused Flannery of letting his army die daily. He said told Flannery to stop the madness, and realize that he’d run out of soldiers. O’Leary went out.

Flannery turned red, and stuttered out a counter. He said that he thought that the Sharks were not grasping the concept of the business. Daymond told him that he fully understood – all of the Sharks did. Kevin Harrington told Flannery that he had a problem with the entire concept. Since patients would be able to send emails and surf the internet using their phones, the model was about advertising. Harrington said that he, as a patient, would not pick up the tablet just to look at ads. He went out.

With the two Kevins out, Barbara told Flannery that she admired his courage for putting so much at stake for the sake of his business. After that compliment, she brought him back down to reality. Barbara told Flannery that quitting takes even more courage than sticking with a failing idea. She went out. Daymond told Flannery that he was risking his children’s college and the roof over their head for a failing business. Flannery told him that he wanted to give his children the best that he could since he grew up with nothing. Daymond said that Flannery built himself up from nothing just to mortgage what he had. Daymond told him to stop, and he went out.

Robert was the last one left. He told Flannery that he sympathized. Robert and his parents were immigrants to the country, and he knew what it was like to grow up with nothing. Robert told Flannery the lesson he learned from his factory worker father – you have to save your money to avoid putting your family at risk. He said that there’s a thin line between being a fool and belief, and he thought that Flannery was crossing it. Robert went out. Kevin Flannery thanked the Sharks for their opinions, and walked off the stage. After he left, the Sharks discussed the presentation. Robert called it heartbreaking, and Kevin said that they’d just seen the dark side of business. Robert said the whole problem was with “false encouragement”- but felt like they were able to give Flannery some unbiased advice. Did being on the first-ever episode of Shark Tank give Kevin Flannery the edge he needed to succeed, even without the investment from a Shark? Let’s take a look.

Wispots Now in 2018 – The After Shark Tank Update 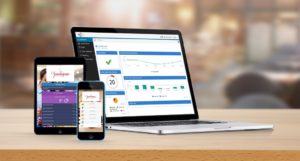 The Shark Tank pilot that featured WiSpots was filmed in eary January of 2009, and it aired in August of that same year. During that time, Flannery overhauled the company. He initiated a merger with the Worthington Healthcare Corporation, and changed the name to WiFiciency, Inc. Instead of just the patient entertainment center, WiFiciency offered voice recognition, medical transcription, and electronic health records. While it’s likely that he got some interest between 2009 and now, the Wifieciency website has gone down. It appears that the company changed names again to AIRwave Medical Solutions INC. Their LinkedIn page is still up, and has two followers, but all other relevant pages have been taken offline except the original wispots.com, which looks like the original website from 2009. It looks like Kevin Flannery did not take his fellow Kevin’s advice, and “stop the madness.” Hopefully he stopped before he ruined his children’s life, as well as his own.