What Happened to Brandy – News & Updates 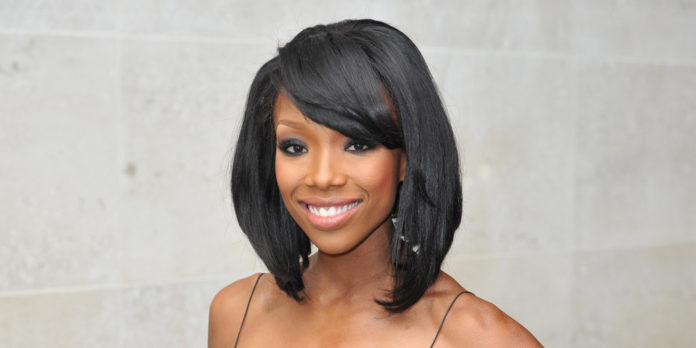 Known for her soft yet raspy voice, Brandy Norwood first rose to fame during the 90’s with her self-titled album in 1994. The daughter of a former gospel singer, music inevitably played a large role in Brandy’s early life. A natural vocalist, Brandy performed a solo in her church choir when she was only two years old. Carrying on with her passion, the young girl began entering a number of local competitions by the time she was eleven; it was during that time that Brandy eventually crossed paths with an executive of Teaspoon Productions, who later arranged to have a demo tape recorded and made for the aspiring artist. After several auditions, she ultimately secured a recording deal with Atlantic Records at the age of fourteen. Brandy soon released her professional debut album, Brandy in the fall of 1994.

Quickly achieving stardom with the success of her debut, the artist went on to release several full-length albums and singles throughout her careerーsix and twenty seven to be exact. A widely popular performer in the R&B world, Brandy has accumulated many awards and honours over the years. Since she first won a Billboard Music Award for “Best New R&B Artist” back in 1995, she has received four BMI Pop Awards, three Kid’s Choice Awards, three NAACP Image Awards, five Soul Train Lady of Soul Awards as well as a Grammy Award. With over a hundred titles under her name, there’s no doubt that this dark skinned beauty is one of the most recognized, and best-performing female artists in the country. As of 2010, she has sold an excess of 30,000,00 records across the world.

Like many singers, Brandy has also ventured into actingーin fact, she has quite an impressive filmography for a music artist. She made her television debut as a teen in the comedy series, Thea; a recurring role which she continued to play for a year. While working on her music, Brandy had a tendency of taking on multiple acting projects on the side; some of her other TV credits include I Still Know What You Did Last Summer (1998), Double Platinum (1999), Sabrina The Teenage Witch (2002), Reba (2002) and Raising Dad (2002), amongst countless others. It’s also noteworthy to mention that Brandy was the lead protagonist in the American sitcom, Moeshaーa 1996 series which ran for a total of six years. More recently in the 2010’s, she has starred in various television shows such as 90210 (2011), Drop Dead Diva (2012) and The Game (2015).

But what has the multi-talented artist been up to since then? Has she been involved with the making of any new records or even television series as of late? What happened to Brandy? Where is she now in 2018? 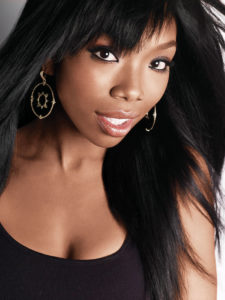 Born on February 11, 1979, Brandy Rayana Norwood is the daughter of Sonja Bates, a district manager and Willie Norwood, a choir director and former vocalist; she is the older sister of Ray J, a popular R&B singer. Growing up in a Christian household, Brandy was a regular attendee at the local church, where her father worked. Raised in a music loving family, she was a member of the church choir and performed her first solo with them at the tender age of two. When she was four years old, she moved from her native Mississippi to Los Angeles, where she eventually went to Hollywood High Performing Arts Center. A huge fan of Whitney Houston, Brandy’s interest for music only grew fiercer as she went through grade school; despite her obvious vocal talents however, she had a difficult time garnering the support of her teachers at school. When she turned eleven, she began entering various talents shows and showcasing her vocals at a handful of public events.

Her talent did not go unnoticed for long howeverーas Brandy’s eventually caught the eye of Teaspoon Productions, a recording company headed by Earl Harris and Chris Stokes at the time. Helping to further develop the singer’s singing, they offered her the opportunity to sing as a backup vocalist for the R&B group, Immature; the gig was then shortly followed by the production of a demo tape. A few years after first being noticed, Brandy landed a recording contract with Atlantic Records, with the help of her parents. To help manage the music career of her daughter, Brandy’s mother ultimately resigned from her work; in order to focus on her music, Brandy also eventually dropped out of high school, to be tutored privately. 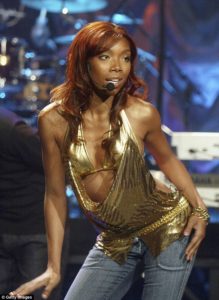 In September 1994, Brandy released her eponymous debut album, Brandy under Atlantic Records. Created in collaboration with several music producers such as Keith Crouch, Damon Thomas and Arvel McClinton, it contained a blend of pop, contemporary R&B and hip-hop soul sounds. A definite crowd pleaser, the artist’s debut work was met with positive reviews; upon its release, critics also took the opportunity to describe the singer as a “moving success.” Featuring fourteen tracks on its disc, Brandy debuted at number ninety-four on the US Billboard 200 and eventually went up to number twenty during its second month on the chart; it also ranked on the Top R&B and Hip Hop Albums Chart where it peaked at number six. As of October 1996, Brandy has been certified 4x Platinum by the RIAA in the United States.

Four years after her initial release, Brandy released her second studio album entitled, Never Say Never in June 1998ーit would be the artist’s second multi-platinum certified album. Proving to be more of a hit than her debut effort, the album peaked at number two on both the US Billboard 200 and the Top R&B Albums Charts. Revolving around themes of love, maturity and monogamy, Never Say Never was known for having integrated more ballad heavy sounds into Brandy’s usual urban pop style. Quickly selling over 160,000 copies during the initial week of release, the album also proved to be a winner amongst critics. Awarded a four star rating from Allmusic, Never Say Never went on to win various awards including a Grammy Award for “Best R&B Performance by a Duo or Group with Vocal” for the song, The Boy is Mine, which featured Monica. Even after all these years, it remains to be Brandy’s best-selling and highest-charting album to date. 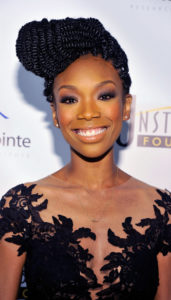 Brandy’s first album release after a four year hiatus, her third studio album, Full Moon showcased sixteen tracks which featured a blend of R&B, soul and contemporary ballads. Well received amongst fans, the album topped the Billboard 200 and Top R&B Albums Charts at its debut and sold close to 156,000 units during the initial week. Despite its popularity however, Full Moon was also met with its fair share of mediocre ratings; for instance, critic Robert Christgau had given the album a “dud” in his rating of the album. Having said that, commercially the album was a major hitーit has since been certified 3x Platinum by the RIAA for having achieved over 3 million sales globally. Full Moon also earned Brandy a Grammy Award nomination for the category of “Best Contemporary R&B Album” in the 2003 ceremony.

In the summer of 2004, the music artist released her fourth full-length album entitled, Afrodisiac. Her fourth RIAA certified album in a row, it was recorded after several major events in Brandy’s life including the birth of her daughter and the collapse of several relationships including that of her father’s. An autobiographical album, its songs were noted for featuring intimate lyrics alongside themes of codependency, anxiety and misplaced loyalty. Hailed for its maturity and Brandy’s vocal performance, Afrodisiac entered the Billboard 200 Chart at the number three spot; it later also peaked at number four on the Top Hip Hop Albums Chart. Having received an A- rating from Entertainment Weekly, the album went on to spawn three singlesーTalk about Our Love, Afrodisiac and Who is She 2 U. As of 2012, over 416,000 copies of the album have been sold in the United States alone.

At the end of that same year, Brandy asked to be released from Atlantic Records, whom she’d been with for over ten years. Under Knockout Entertainment, her brother’s vanity label, she released her fifth album, Human in December 2008. Consisting of fifteen tracks, the album debuted at the fifteenth position on the Billboard 200 and achieved close to 73,000 sales during the initial weekーmaking it the singer’s lowest-performing album since her debut; it was also Brandy’s first album not to receive RIAA certification.. Despite its less than ideal sales however, it was favourably spoken of by critics; The Guardian gave Human a four star rating while Entertainment Weekly presented it with a modest “B”. As of 2012, more than 214,000 units of the album have been sold in the US.

In October 2012, the R&B artist released her sixth album, Two Eleven. Applauded for its overall direction, the album featured a diverse number of collaboration tracks including ones with Chris Brown and Frank Ocean. The album’s debut was a strong one; it entered the Billboard 200 at number three and achieved 65,000 sales within the first weekーit was also Brandy’s second album to debut at number one on the Top R&B Chart. Assigned a weighted score of 77/100 on Metacritic, Two Eleven went on to produce two singles: Wildest Dreams and Put It Down. 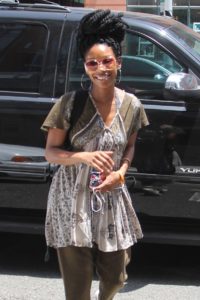 In March 2016, the 37 year old singer made the news when she filed suit against Chameleon Entertainment, her recording label. In the complaint, Brandy has stated that the label “will not pay for her to record new albums or allow her to otherwise release music to her fans.” According to the star, the label allegedly tried to “bully” Brandy into signing a new deal with worse terms compared to her current one, thus jeopardizing her career. For this, the artist is claiming one million dollars in compensatory damages.

Although Brandy hasn’t released a studio album for many years, that doesn’t mean she’s forgotten about her fansーin fact, she just finished a concert tour this summer. Referred to as the Slayana World Tour, a pun on the word “slay” and the singer’s middle name, the event was originally announced on February 2016; it eventually kicked off at The Civic in Auckland, New Zealand on June 15, 2016 and continued until June 30, 2016 at the LKA-Longhorn in Stuttgart, Germany. While the tour was meant to go on until early July, those three shows were eventually cancelled due to Brandy being hospitalized.

If you want to stay connected with the dark skinned beauty, you can do so easily by following her on social mediaーyou can find her online presence at Twitter under the username @4everBrandy or on Instagram, also under the same handle @4everBrandy. For more information on Brandy, don’t forget to also check out her official website (4everbrandy.com) as well as her Facebook page!