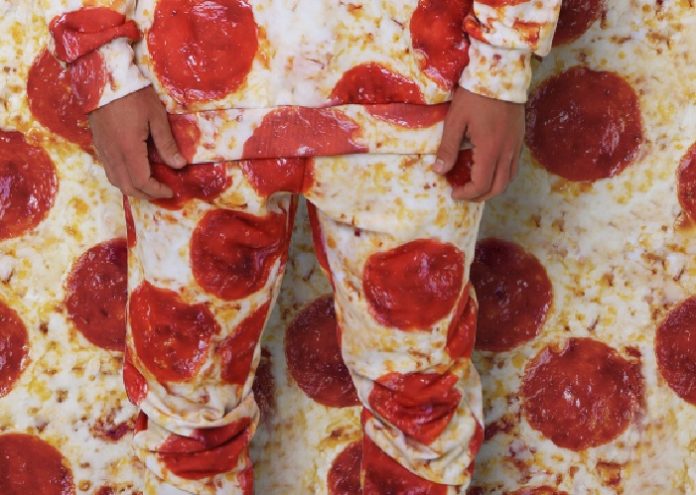 The World of business is generally a fairly serious environment. Even in the lively Shark tank there’s usually little time for fun and enjoyment once the Sharks start to get down to the details, but Beloved Shirts founder Jeremiah Robinson, from Provo, Utah came to the tank with a product that was specifically designed to make life a little more fun, and considerably more colorful.

Back in 2012 Jeremiah had been a member of an indoor soccer team, and decided that it would be fun, and potentially distracting for their opponents, if the team jerseys had realistic pictures of food on them. Using a process called sublimation, where dye can be transferred to a material using heat, the jerseys were produced, but the idea had given Jeremiah the idea for his own business, and Beloved Shirts was born.

The first design produced for general sale by Beloved Shirts was the engaging dill pickle design, and Jeremiah soon found that the bright, colorful and above all fun shirts were appealing to all the fun-loving potential customers who laid eyes on them. Fortunately the business had an early and unexpected boost when singer Katy Perry began wearing one of the companies most popular designs, the appetite inducing Pizza onesie, or ‘belovesie’ as Jeremiah prefers to call them. Eventually Katy ran an official collaboration with the company to provide her own customized ‘Left-Shark’ Belovesie to her fans and it wasn’t long before other celebrities, such as the Kardashian family and Miley Cyrus began to be seen dressed in the vividly printed apparel.

Jeremiah Robinson needed investment and expert business advice, in order to make Beloved Shirts into a successful global brand, and to that end he auditioned for the show at the University of Utah and finally appeared in the Shark Tank in March 2016. He was hoping to acquire a shark partner and $175,000 investment, in exchange for 5% of the company.

Jeremiah pitched his shirts to the sharks by explaining his ambition to make life more fun, more exciting and most importantly more colorful. Along with a couple of assistants he initially appeared dressed in a dull grey sweatshirt, but he soon ripped that off to display a variety of vividly printed Beloved Shirts, all of which looked outstanding under the bright lights of the tank. After the pitch, during which the sharks made appreciative noises at the unusually vibrant designs, and Jeremiah hugged a Unicorn for reasons that were never made entirely clear, the entrepreneur announced that he had some customized samples especially for the sharks.

Robert Herjavec held up his full size bed spread with a high definition picture of his face on it and told Lori Greiner that if she was lucky she might get it for Christmas. Lori had a good laugh at that, although it may have been Kevin’s pyjama bottoms imprinted with his face that had tickled her funny bone.

Eventually it was time to get back to business and Robert asked for more information about what the Beloved Shirt business was really about. Jeremiah explained that Beloved Shirts really allowed customers to express themselves, as far as he was concerned, they were selling an experience as well as just an item of clothing. Daymond John recognised the Pizza print onesie as the one worn by Katy Perry, and Jeremiah explained that the star had approached the business herself as she had liked the shirts so much.

There were a few more questions from the sharks about pricing, and Jeremiah ran through a few prices, which varied from item to item, but after an inquiry from Daymond he confirmed that the average profit margin across all products was about 60%.

Mark Cuban asked Jeremiah how many products the company stocked, and what the value of inventory was on an average day. The Beloved entrepreneur explained that the company typically kept no products in stock, instead making everything to order. He admitted that although this strategy did have the advantage of keeping operating costs low, unfortunately there was also the disadvantage of turn around times on orders of up to thirty days.

Robert Herjavec asked what sales had been achieved so far. Jeremiah’s answer of $2.3 million impressed all the sharks. Robert then inquired how long the business had been in operation. Jeremiah disclosed that Beloved Shirts had launched only two years earlier which elicited even more impressed looks from the sharks.

Kevin O’Leary was impressed by the sales figures, but he was less enthusiastic about Jeremiah’s valuation of the business at $3.5 million. Jeremiah defended the valuation but Mark Cuban jumped in and asked why the orders process had not been automated previously. Jeremiah finally admitted that the Beloved Shirt business was running an amazing number of SKU’s, twenty two thousand of them to be exact, and the tank was momentarily quiet as the sharks digested the fact. Lori asked why there were so many individual lines and Jeremiah explained that it was the array of sizes the company supplied that caused such a large number of products, every size from extra small to 3XL was catered for.

Kevin O’Leary continued to cast doubt on Jeremiah’s valuation and a small shark fight ensued between Kevin and Mark Cuban, well it was a shark tussle at least. Mark accused him of refusing to accept that a company could grow, Kevin retorted that Mark was clearly an unwise investor. Jeremiah looked on uncomfortably while the sharks argued, until Mark Cuban asked him how he intended to grow sales even further. Jeremiah revealed that he intended to enter more traditional retail markets in the future, but the sharks gave him even more cause for discomfort as they unanimously expressed a lack of enthusiasm for that strategy. Lori Greiner told Jeremiah that his profit margin, currently standing at a respectable 60% would drop sharply if he was selling goods to retailers, as they would only purchase large orders under a wholesale pricing scheme.

Jeremiah explained that he knew the current made-to-order business model that he was operating would not be able to convert to a large-scale distribution of his products, and that was partly why he was looking for additional investment. He admitted that the Beloved Shirts online business was only currently achieving a 1% conversation rate, which drew even more concerned looks from the sharks, but he intended to use any funding he could gain from the sharks to improve the conversion rate.

Mark Cuban expressed his admiration for what Jeremiah had achieved with his business in such a short time, but he also believed that there was more refinement of the business model before Beloved Shirts was ready for additional investment and growth. Mark offered Jeremiah good luck for the future, but he was out.

Robert Herjavec was equally full of praise for Jeremiah’s achievements, but he admitted that his investment in TipsyElves, which had appeared on Shark Tank in 2013 and had eventually become Robert’s most successful investment on the show, was a conflict of interest for him, and due to that he was also dropping out.

Lori Greiner had some expert advice for Jeremiah. She felt that Beloved Shirts carried far too many SKU’s, and a greater focus on the top selling items would benefit the company greatly. She advised Jeremiah to keep an inventory of the top selling items in order to alleviate long turn-around times for the majority of sales. Lori may have had a few free suggestions, but unfortunately for Jeremiah she didn’t feel that the business was invest-able at that time, and she wasn’t prepared to make an offer, and with that Lori was out too.

Kevin had already expressed his unhappiness with the valuation of the business and he dropped out without too much fuss, leaving only Daymond John in the bidding. Daymond admitted he had ‘many concerns’ about the business, but was prepared to make an offer. He suggested the requested $175,000 in exchange for 25% equity, but it was clear from Jeremiah’s face that the offer wasn’t going to be accepted. The entrepreneur countered with 15% but Daymond would only reduce the required equity to 22.5%. After a moments thought, Jeremiah declined the offer, and that was it for Beloved Shirts in the Shark Tank.

Beloved Shirts Now in 2018 – The After Shark Tank Update

Jeremiah may have left the tank without a deal, but his appearance on the show has led to a great deal of growth for the company in the six months since the segment was first aired. The interest in Beloved Shirts spiked significantly in the month after the show and although orders have dropped back to normal levels now, Jeremiah is confident that the increased brand awareness will result in far greater sales in the businesses all-important fourth quarter revenue, traditionally the period when the company makes the majority of its profits.

Jeremiah has remarked on how useful the advice he received in the tank has been, particularly that offered by the queen of QVC, Lori Greiner. Jeremiah has reduced the number of individual SKU’s the company supplies and also cut down on fixed expenses. Perhaps the companies greatest improvement to customer satisfaction has been the reduction in turnaround times for orders. After improvements to the manufacturing process, Beloved Shirts now manage to average a five day turnaround for fulfilment of their made-to-order products.

The Beloved Shirt range still remain popular and exceedingly cool. There are a wide variety of celebrities who can be spotted wearing the designs these days, from Rob Zombie to Riff-Raff. Rapper Eddie Wollrabe, known professionally as ‘Yung Chef’, recently sported one of Jeremiah’s Chicken Ramen printed sweatshirts in the video for his track ‘Top Ramen’, and Jeremiah has also been quick to provide plenty of Pokemon themed designs to coincide with the surge in popularity of the Pokemon Go augmented reality game. But perhaps Jeremiah’s most exciting development has been the launch of Sublimation Kitchen, a platform where artists can submit their own designs and once they are approved, they become available on the Beloved Shirts website, enabling artists to receive 20% of all the revenue from their design, which Jeremiah insists is considerably more than any other commission offered to artists in the industry.

Jeremiah has asserted that he never regretted his decision to reject the only offer he received in the Shark Tank. He believes that Daymond John didn’t consider the hype behind his products, and the potentially huge profits that he believes await him in the future. Jeremiah has nothing negative to say about his experience in the tank, but some of his more vocal fans have not been backward about slamming the offer, calling it ‘greedy’ and ‘short-sighted’, and if there is one thing that the Beloved Shirts business has plenty of, its loyal customers. As of now in 2018, the future for Jeremiah and Beloved Shirts is yet to be determined, but with a fan base like that, and an ever growing number of celebrity endorsements, the future of Beloved Shirts could well be as bright as those blindingly vibrant shirts.