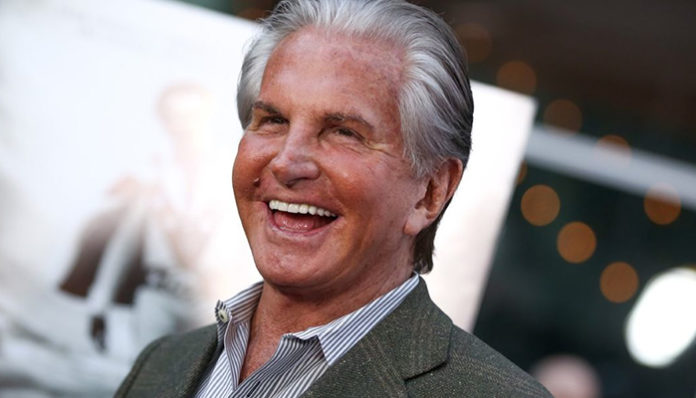 Veteran actor, George Hamilton first made himself known to the world when he dazzled audience members with his performance on Crime and Punishment USA during the 1950’s. Hailing from Tennessee, Hamilton made his debut on television in the 1958 series, The Veil at the age of nineteen playing the role of a minor character. He eventually went on to play several other small roles in front of the camera before landing a lead part in the 1959 feature film, Crime and Punishment USAーa role which later garnered him a Golden Globe Award. With his popularity on the rise, he soon found himself starring in a series of shows including Home from the Hill (1960), All the Fine Young Cannibals (1960), Where the Boys Are (1960), Angel Baby (1961) and A Thunder of Drums (1961), to name a few. In 1969, Hamilton landed a recurring role in the TV series, Harold Robbins’ The Survivorsーa role which marked his debut onto the small screen.

Considered by many to be a “big-name” in the entertainment industry, Hamilton has well over a hundred film and television credits to his nameーa list which only appears to be getting longer as he isn’t about to settle down for retirement anytime soon. Since he first took home a Golden Globe Award in 1959, he has received an Academy of Science Fiction Award for “Best Actor”, a Laurel Award for “Top Male New Personality”, and a ShoWest Convention Award for “Showman Star of the Year”. On top of that, Hamilton is also a two time Golden Globe Award nominee (excluding his win) and a two time BAFTA Award nominee. In 2009, the actor was also honoured with a star on the Hollywood Walk of Fame for his contributions to the show business.

A familiar face on the television, Hamilton has been featured on countless variety show throughout his multi-decade acting career including The New Paul O’Grady Show (2005), The Bonnie Hunt Show (2008), Live! with Kelly (2008), The Late Late Show with Craig Ferguson (2010) and The Wendy Williams Show (2015), amongst others. Besides being a talk show guest, he has also taken part in a number of reality game series such as Dancing with the Stars (2006), I’m a Celebrity, Get Me Out of Here! (2009), Celebrity Wife Swap (2015) and Celebrity Family Feud (2016). At one point, he even hosted a culinary series, The Best of Wine & Food in 2000. Aside from the show biz, Hamilton was also an entrepreneurーdid you know he launched his own tanning salons and cigar lounges in the past?

So what has the actor been up to as of late? What new TV shows and movies will he be starring on? What happened to George Hamilton? Where is he now in 2018? 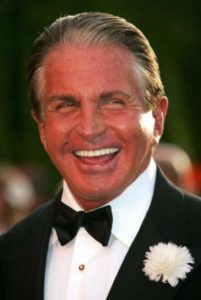 Born on August 12, 1939, in Memphis, Tennessee, George Stevens Hamilton is the son of Anne Stevens and George Hamilton, the latter of whom was a former bandleader. Growing up with his siblings during the 1940’s, he moved around often with his family as a result of his father’s touring lifestyle; they eventually settled down in Palm Beach when Hamilton was in his teens. A student at Palm Beach High School, he participated in many sports and was known to have been an avid athlete. An honour student, it was also during this time that Hamilton first developed an interest for acting and drama.

Chasing his newly found passion, he made the bold decision to move to Los Angeles in his late teen years after graduating from high school. Attracting attention with his exceedingly good looks, Hamilton soon made a string of guest appearances on both film and television, some of which include The Veil (1958), The Adventures of Rin Tin Tin (1959), Cimarron City (1959) and The Donna Reed Show (1959). Despite having only landed small roles at the time, it was a big step for the aspiring actor who had never stood in front of the cameras previously. It wasn’t until late 1959 that Hamilton got his first taste of rising celebrity stardom. 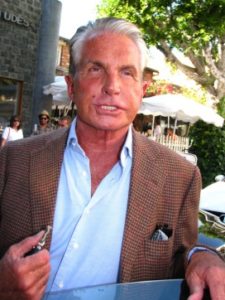 Hamilton’s big break came when he landed a supporting role in the feature film, Crime and Punishment USA at the age of twenty. Based loosely on a novel of the same name by Fyodor Dostoyevsky, the black and white movie told the story of an American law student, who murdered a pawnbroker only to find himself facing off against the policeman assigned to solve the crime. Released in theatres in November 1959, the motion picture not only starred Hamilton but also Mary Murphy, Frank Silvera, Mirian Seldes and Eve McVeagh. Although Crime and Punishment USA did not fare up well against the critiques of contemporary critics, it was significant in jump starting the actor’s budding career at the time. The film eventually garnered Hamilton a Golden Globe Award for the category of “Most Promising Male Newcomer” the following year.

From there, Hamilton began appearing in a steady stream of roles including the films, All the Fine Young Cannibals in 1960 and Angel Baby in 1961ーboth of which also saw him playing the parts of supporting characters. Perhaps noteworthy from that era was his role in the musical, Your Cheatin’ Heart. Premiered in November 1964, the film was one of the first to feature Hamilton as a lead protagonist. Directed by Gene Nelson, Your Cheatin’ Heart followed the life of a country singer named Hank Williams (played by Hamilton), who eventually joins a group of musicians called The Drifting Cowboys, as a means of achieving fame. Although it was a small movie, it earned Hamilton much applause for his acting performance.

In terms of the small screen, it wasn’t until the fall of 1969 that the performer landed a major role on TV. Premiered on the ABC Network, the American soap operaーThe Survivors marked Hamilton’s entrance into primetime television. Originally aired in late September of that year, the series revolved around the Hastings family who eventually finds themselves getting involved with revolutionaries from South America. Despite the presence of multiple big name celebrities such as Lana Turner, Jan-Michael Vincent, Diana Muldaur, Ralph Bellamy and Hamilton himself, the soap achieved less than ideal ratings upon its premiere, which put together with its expensive production, led to its eventual cancellation after half a season.

After a decade of acting, Hamilton received a lead part for the horror comedy film, Love at First Bite. Opened in theatres in April 1979, the vampire spoof boasted a cast list which included actors Susan Saint James, Arte Johnson and Richard Benjamin (as well as Hamilton of course). A commercial hit, Love at First Bite centred around Count Dracula (played by Hamilton), who fuelled by a desire to locate his bride, moves to New York after being kicked out of his Transylvanian castle. Having grossed over $43 million, the film was a critical success at the box office and was listed as one of the top-grossing movies of 1979. For his portrayal of Count Dracula, Hamilton received a Saturn Award for “Best Actor” as well as a Golden Globe Award nomination for “Best Actor in a Comedy Motion Picture.”

A couple of years later, the actor was offered a title role in the comedy film, Zorror The Gay Blade. Directed by Peter Medak, Hamilton was also involved as a co-producer in the movie. Set in the mid 1800’s in Spain, the film told the story of Don Diego Vega, a man who ultimately adopts the persona of Zorro (played by Hamilton)ーa masked folk hero, after learning that his late father had been Zorro prior to his death. Although Zorror The Gay Blade was a flop in the box office, having only grossed a little over $5 million from a $12.6 million budget, it was well-received amongst critics, who praised the actors’ performances. Hamilton later received a Golden Globe Award nomination in 1982 for his portrayal of Zorro. 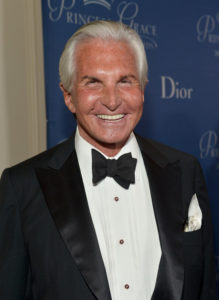 Throughout the 80’s and 90’s, Hamilton made dozens of appearances on both the big and small screensーincluding Dynasty (1985), Monte Carlo (1986), Spies (1987), The House on Sycamore Street (1992) and The Bold and the Beautiful (1994), just to name a few. In 1995, he was presented with his very own daytime talk show, George & Alanaーone which he shared with his then-wife Alana Stewart. Distributed by Rysher Entertainment and aired on the WCBS Network, it was noted for having followed a comparable format to Live with Regis & Kathie Lee, in that it featured a guest whom was announced at the start of every episode. George & Alana continued for approximately half a year before being cancelled in the spring of 1996.

Carrying on with his work into the 2000’s, the actor went on to appear in multiple films such as Off Key (2001), Reflections of Evil (2002), Hollywood Ending (2002), The LA Riot Spectacular (2005) and Rumor Has It…(2005). At the same time, has also took up several guest roles on television including that of the shows The Family (2003), Las Vegas (2004) and Too Cool for Christmas (2004). In 2006, Hamilton was also a cast members in the popular dancing competition, Dancing with the Stars. Although he hasn’t appeared much in movies in the recent years, he has been featured on a couple of reality series such as Stewarts & Hamiltons and Celebrity Wife Swap in 2015. 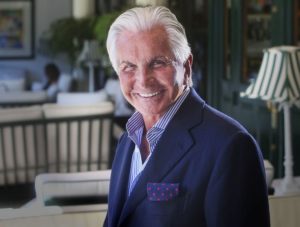 This spring, the seasoned actor appeared in the drama movie, The Congressman playing the supporting role of Laird Devereaux. Released in the United States on April 1, 2016, the film revolves around Charlie Winship (played by Treat Williams), a congressman who leaves for an island off of Maine in attempts to get away from his life which involves a less-than-happy wife as well as the paparazzi. Other starring actors include Elizabeth Marvel as Rae Blanchard, Ryan Merriman as Jared Barnes and Chris Conroy as Ben. In spite of its strong cast however, The Congressman garnered disappointing results at the box office, and mixed reviews from critics.

Another ongoing project that Hamilton is involved with is the television movie, Swiped. Written and directed by Ann Deborah Fishman, the production will star Kristen Johnston, George Hamilton, Noah Centineo, Nathan Gamble and Shelby Wulfert in the lead parts. Currently finished filming and in the post-production stages, Swiped tells the story of a group of computer nerds who manage to code and create “the ultimate hook-up app” only to find themselves stuck facing unexpected consequences. As of April 2016, the comedy has been bought by CBS Filmsーalthough no official release date has been announced as of yet.

If you’d like to stay up to date with the Golden Globe Award-winning actor, you can do so by following his online presence on social mediaーyou can find George Hamilton on his Twitter account under his handle @georgehamilton. Regrettably for us fans, it seems like he hasn’t taken on to photo sharing on Instagram quite just yet!