What Happened to Moby- News & Updates 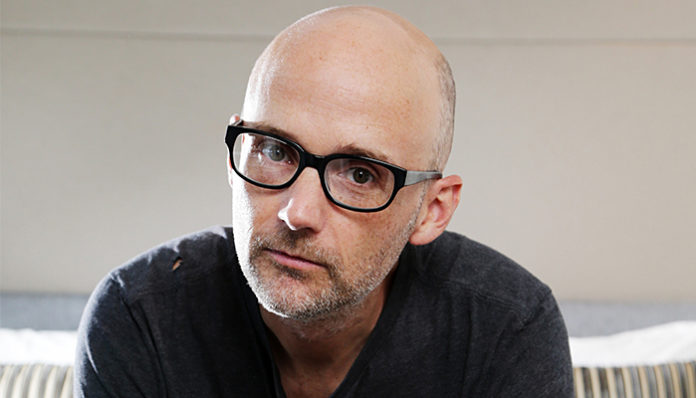 Moby is an American singer-songwriter first rose to fame with his electronic dance hits during the 1990’s. Encouraged to pursue music by her mother, Moby began to play the guitar when he was nine years old. Soon followed by music theory lessons, the young aspiring musician eventually formed a band during his teen years; together with his bandmates, he released an EP entitled Hit Squad For God in the early 80’s. Fast forward a few years, Moby began performing and DJing at local clubs trying to kick start his musical career. Receiving recognition, he later secured a recording deal with Instinct Records; soon after, he released his first studio album, Moby in 1992. However it wasn’t until the end of the 90’s, that he finally achieved a breakthrough in his budding career.

Having been a member of the music scene for close to thirty years, Moby’s discography is nothing to scoff atーit consists of twelve full-length albums and seventy two singles! His best-performing album to date is his 1999 effort, Play which has since sold over 2.7 million copies in the United States alone. A highly regarded artist, Moby has also accumulated quite a collection of awards over the years; he has received two Billboard Music Awards, two BMI Awards, two MTV Video Music Awards, an IFPI Platinum Europe Award, a Q Award, the list goes on. On top of his already mentioned achievements, the artist is also a six time Grammy Award nominee and has been considered to be “One of the Most Important Dance Music Figures of the 1990s” by Allmusic. According to Q Magazine, Moby has sold over 20,000,000 records globally to date.

A talented songwriter, Moby has produced and co-written numerous songs for other artists throughout his career including those for Michael Jackson, Britney Spears, David Bowie and Metallica, amongst many others. In addition, he has also contributed to hundreds of popular television soundtracks such as The Vampire Diaries (2009), Running Man (2010), The Tsunami and the Cherry Blossom (2011), Reason to Kill (2013), True Blood (2014) and Person of Interest (2015). Not to mention he also works occasionally on the small screen as an actorーsome of his acting projects include Alien Sex Party (2003), FCU: Fact Checkers Unit (2011), The Mindy Project (2013), Blunt Talk (2015) and Young Hollywood (2016). In 2015, Moby even acted as a judge on the reality game show, King of the Nerdsーa series in which a group of competitors go against each others wits for a chance to win $100,000.

But what has the seasoned singer been up to since then? Are there any new upcoming projects scheduled for the star? What happened to Moby? Where is he now in 2018? 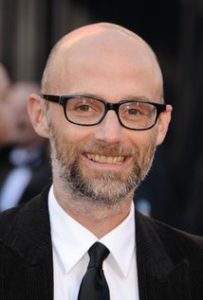 Born on September 11, 1965, in Harlem, New York, Moby (Real Name: Richard Melville Hall) is the son of James Frederick Hall, a chemistry professor and Elizabeth McBridge, a secretary. When Moby was two
years old, his father tragically passed away from a car accident, leading him to have been raised up by his mother. Not long after the incident, Moby and his mother moved to Darien, Connecticut, where her family had lived. Once settled in the new city, Moby’s mother went off to college to finish her degree while Moby was left in the care of his maternal grandparents. However having said that, his parents still worked full time jobs; as a result, young Moby had a lot of time to himself as a young boy.

Perhaps it was due to his abundance of free time, but Moby quickly developed an passion for music in his early years. His mother, who was an avid pianist eventually encouraged him to pursue different musical interests; she also regularly performed classical music for her son to listen to. Catching on to his mother’s knack for music, Moby began to play the guitar at the age of nine. Enjoying what he was doing, he later took up formal music theory lessons and started a band with a group of friends at Darien High School. Although short lived, the band Vatican Commandoes, as it was called, went on to release a single EP entitled Hit Squad For God.

After graduating from high school, Moby enrolled at the University of Connecticut, where he majored in philosophy. However distracted by his ongoing love for the tunes, he later dropped out of his classes after a year to pursue a full-time music career. Working hard to kick start his dreams, Moby began working at a record store during the day while performing various gigs at night in local clubs. It was during this time that he eventually began to gain recognition for his talents. By 1989, Moby had managed to secure a recording contract with Instinct Records. 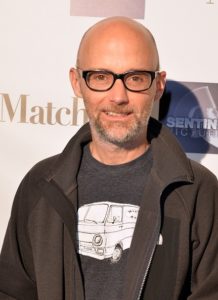 A year later, he released his first professional single, Mobility; but it’d ultimately be met with limited success. The single was soon followed by another entitled, Go which was released in November 1990. Unlike his debut work, it quickly became a hit, reaching the top ten in the UK Charts. In the summer of 1992, Moby released his debut self-titled album, Moby under Instinct Records. Favourably spoken of by critics, it received a perfect five out of five ratings from Allmusic and an A- rating form Entertainment Weekly, although it did not go on to reach the charts. Consisting of twelve songs, all of which were written by the artist himself, Moby eventually went on to make over 72,000 sales as of 2000.

A regular at the recording studio, Moby released three more full-length albums during the early to mid 90’s including Ambient (1993), Everything Is Wrong (1995) and Animal Rights (1996). However similar to his earlier effort, none of them ended up making that big of an impact on his career. It wasn’t until May 1999, that Moby received his breakthrough with the release of his fifth album, Play. Recorded at his own home studio in Manhattan, the album was notable for its extensive sample use from field recordingsーmost of which were short and repeated regularly throughout his tracks. Debuting on the UK Albums Chart at number thirty-three, Play eventually found its way to number one three months after re-entering the chart in 2000. The recipient of widespread acclaim, the album currently holds a 84/100 weighted score on Metacritic and an A- rating from Entertainment Weekly. Largely successful, it has gone on to sell over 2.7 million copies in the US alone, earning it 2x Platinum status from the RIAA. 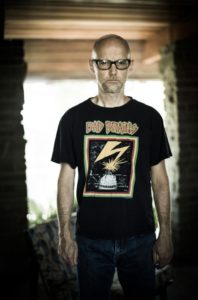 Moby released his sixth studio album entitled, 18 in May 2002. Produced by the artist himself, the disc saw eighteen tracks, several of which featured various music artists such as Jennifer Price, Freedom Bremner, Azure Ray and Angie Stone. Although met with mixed reviews from critics, 18 was a commercial success, having debuted at the top of the UK Chart and various other European nations; in the United States, it also peaked at number four on the Billboard 200. Having reached the top five in over a dozen charts around the world, the album later went on to spawn six singles including We Are All Made Of Stars, Extreme Ways, In This World, In My Heart, Sunday (The Day Before My Birthday) and Jam for the Ladies. As of 2013, it has sold over 513,000 copiesーa respectable amount for an electronic album.

In the Spring of 2005, Moby released his next album, Hotel. A departure from his earlier dance and electronica driven styles, the album was known for having incorporated a much more alternative rock-based approached; it is also the artist’s first record since 1993 to not feature any vocal sample works. Mixed at his own apartment, Hotel showcased fourteen different tracks, including one that was hidden in all editions of the album. Favourably received, the album spawned six singles and eventually reached number twenty eight on the US Billboard 200ーa considerable drop from his preceding album. Having said that however, Hotel did go on to earn both Gold and Platinum statuses in a number of countries; last checked, it has sold well over 2,000,000 units worldwide.

The artist’s eighth studio album was released in March 2008. Entitled Last Night, it was much heavier in electronica dance sounds than his preceding efforts. Described as “a love letter to dance music” by Moby himself, the album featured a handful of guest vocalists including MC Grandmaster Caz, Sylvia, Wendy Starland and Aynzli. Although it garnered positive reviews from critics, Last Night achieved very low salesーonly 200,000 copies were sold world wide within the initial month. While it peaked at number twenty-seven in the American Chart, it ranked in higher in many European countries such as Italy, Austria, Poland, France and Switzerland.

Over the next decade, Moby continued diligently with his recording and went on to release four more full-length albums including Wait For Me (2009), Destroyed (2011), Innocents (2013) and Long Ambients 1: Calm. Sleep (2016). However they would only be met with lukewarm success on the charts compared to his major hits in the earlier years; the best performing out of the series was Wait For Me, which reached number twenty-two on the US Billboard 200. 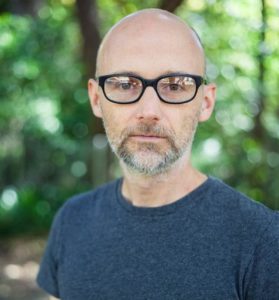 This February, Moby released his twelfth album, Long Ambient 1: Calm. Sleepーwhat makes it unique though is the fact that it was released as a free download on his website. According to the songwriter, he had been spending the last couple of years making “really really really quiet music” for the purposes of yoga or meditation. At the end of it, he had four hours worth of music and ultimately, had decided to give it away for free to his fans online. If you’d like to listen to these tracks, feel free to drop by his website.

However Moby’s not quite done yet with music this year, if you know what I mean. In fact, he has an upcoming album entitled, These Systems Are Failing which is set to be released on October 14, 2016. His tenth album with Mute Records, it will also be his first project under The Void Pacific Choirーsomething which he came up with back in 2015. Produced by Moby himself, the thirteenth full-length album will contain nine tracks (twelve in the deluxe version), including Are You Lost in the World Like Me?, Erupt and Matter, The Light is Clear in My Eyes and And It Hurts; the first of which was the latest single released from the album. The album was first announced through the artist’s official Youtube back in September 2016; since then, the video has reached over 250,000 views!

If you’d like to stay connected with the award-winning musician, you can do so by following him on social mediaーyou can find him on Twitter (@thelittleidiot) as well as on Instagram (@moby). Don’t forget to also check out his official Facebook page (@mobymusic) and website for some of his most up-to-date news!