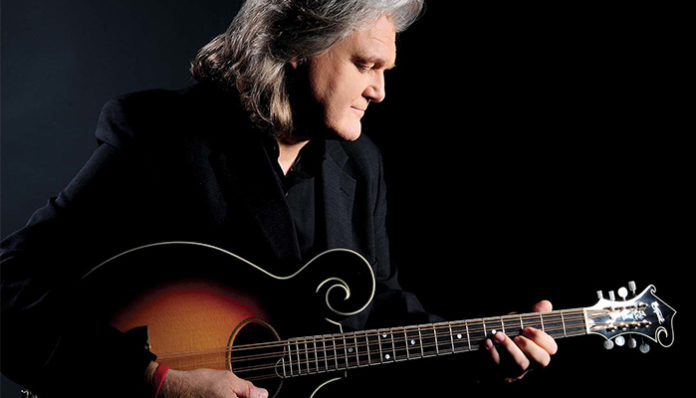 Ricky Skaggs is an American country singer who is known for the hits Country Boy and Crying My Heart Out Over You. Born into a family of passionate music lovers, it didn’t take Skaggs a long time to develop an interest to country music, particularly bluegrass. As a young child, he first began to sing at the age of four, often sharing harmony parts with his mother, who was also an avid singer. Eventually taking up the mandolin, his musical talents did not go unnoticedーby the time he was six, he had already become somewhat of a local celebrity in his city. After many years of performing by solo and with a band, Skaggs made his big debut in the music scene in 1981 with his album, Waitin’ for the Sun to Shine, after signing a recording contract with Epic Records.

Over the next decade, the artist released over half a dozen albums under his name; to date, he has recorded thirty-two studio albums and thirty-nine singlesーthirteen of which, later became number one hits on the charts. Primarily a mandolin player, Skaggs is also capable of playing the banjo, mandocaster, fiddle as well as the guitar. A well-respected singer and song-writer, he has heaped up a fair amount of awards over the years; his collection currently includes fourteen Grammy Awards, eight Country Music Association Awards, eight Academy of Country Music Awards, thirteen IBMA Awards as well as eight Music City News Country Awards. Ranked “Artist of the Year” by Billboard Magazine, the celebrated singer has also been listed as one of the “40 Greatest Men of Country Music” by CMT in 2003.

Throughout his career, Skaggs has been involved as a songwriter with the soundtrack of numerous popular television series, including Square Dance (1987), Next of Kin (1989), The verily Hillbillies (1993), The Cat in the Hat (2003), The Heart of Country: How Nashville became Music City USA (2014). In addition, he has also been invited onto the stages of several talk shows such as Late Night with David Letterman (1990), Late Night with Conan O’Brien (2007), The Late Late Show with Craig Ferguson (2008) and The Marty Stuart Show (2010, to name a few. In front of the cameras, he has also appeared in many documentaries including Austin City Limits (1998), Inside Frame (2003), Radio Worth Fighting For (2004) and Revival: The Sam Bush Story (2013). Back in 2003, Skaggs was also a celebrity contestant in an episode of the famed Wheel of Fortune game series.

So what has the country legend been up to since then? What are some of the noteworthy projects which he has taken on recently? What happened to Ricky Skaggs? Where is he now in 2018? 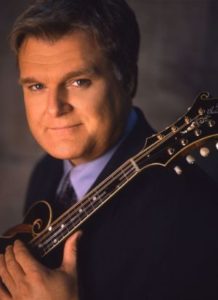 Born on July 18, 1954, in Cordell, Kentucky, Ricky Lee Skaggs is the son of Dorothy May and Hobert Skaggs. Raised in a musical household, Skaggs spent much of his early childhood listening to bluegrass musicーas both his parents were fans. When he was three years old, his father first noticed him singing along with his mother’s vocals as he was playing with some of his toys. By the time he turned four, he was already singing regularly with his mother at family gatherings and at his local church. Noticing his musical talents, his father began to teach him the ways of the mandolin when he was five years old; although he had only taught Skaggs a small handful of chords to play prior to leaving for a work trip, he was amazed to find out that he had mastered various other chord progressions on the instrument by the time he came back.

Considered by many to be a musical prodigy, Skaggs had already garnered somewhat of a fan base within his local town at the tender age of six. The next year, he moved with his family to the music city of Nashvilleーone of the reasons being that his parents had wanted him to grow up in the center of country and bluegrass music. Later the same year, the young boy made his first professional debut on the stage of Martha White’s television show, playing the mandolin. Carrying on with his musical passion, Skaggs soon found himself singing in a band during the late teen years; eventually, he released an album called Second Generation Bluegrass with his group, The Clinch Mountain Boys in 1972. The aspiring artist ultimately spent the next few years hopping from band to band before securing a recording deal in 1981 as a solo artist. 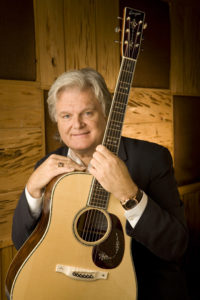 Skaggs entered the music scene with his debut album, Waitin’ for the Sun to Shine in May 1981. Written and produced entirely by the country man himself, it peaked at number two on the US Top Country Albums Chart and at number seventy-seven on the Billboard 200. His first album with Epic Records, its track list boasted ten songs including So Round So Firm So Fully Packed, If That’s the Way You Feel and You May See Me Walkin’. A successful debut, the album later gave rise to two number one hits in the United StatesーI Don’t Care and Cryin’ My Heart Out Over You. Skaggs’ first RIAA certified album, Waitin’ for the Sun has since sold over 500,000 copies in the US.

His next big hit came in 1982, with the release of his fifth studio album (second with Epic Records), Highways & Heartaches. Once again produced by Skaggs, it featured ten different tracks and was describe d containing “catchy pop tunes” by critics on Allmusic. Presented with a close to perfect four and a half star rating, the album reached the top of the Country Albums Chart at number one, and also settled nicely at number sixty-one on the US Billboard 200. Another score for the artist, Highways & Heartaches eventually peaked over one million sales in the United States, earning it Platinum status from the RIAA.

Having cemented his place in the industry with his previous albums, he released his sixth entitled, Don’t Cheat in Our Hometown the following year. Dedicated to the Stanley Brothers, the album featured a blend of pop, honky top and bluegrass materials which garnered favourable reviews from contemporary music critics. Peaking at number one in the US Top Country Albums Chart, it was also a big hit in Canada where it reached number one on the RPM Country Albums Chart and number eighty-seven on the Top Albums Chart. Given a three star rating, Don’t Cheat in Our Hometown contained ten hearty country tracks, five of which featured the guitar instrumentals of Albert Lee. To date, the album has sold over 500,000 sales, making it Skaggs’ second Gold certified studio album.

The following year, Skaggs released his seventh studio album, Country Boy in October 1984ーit would be his third Gold certified album. A fan favourite upon its release that fall, it garnered much positive reception, especially for its title track, Country Boy. Amongst its ten bluegrass oriented tracks, other highlights include Something in My Heart, Window Up Above and Baby I’m in Love With You. Skaggs’ forth album with Epic Records, it peaked at number one of the Billboard Top Country Albums Chartーmaking it his third to achieve such a feat. Country Boy also made its way onto the Billboard 200, where it ranked at number 180.

The 80’s eventually saw three more albums from the country starーLove’s Gonna Get Ya! (1986), Comin’ Home to Stay (1986) and Kentucky Thunder (1989). Skaggs’ eighth studio album, Love’s Gonna Get Ya! was most successful out of the trio; it peaked at number three on the Country Chart while the other two only managed to settle amongst the top twenty. 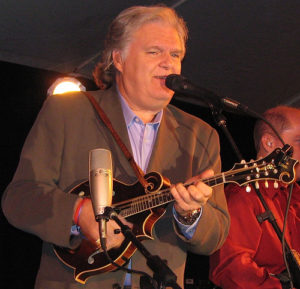 Having never wandered too far from the studio, Skaggs released My Father’s Son in September 1991. A concept album centring around the theme of family, it also deviated from the artist’s usual style in that it was very light on bluegrass. Focusing mainly on the relationship between a father and son, as implied by its title, the album consisted of twelve tracks, one of which (e.g. Only Daddy That’ll Walk the Line) was a duet with fellow singer, Waylon Jennings. Holding a three star rating, My Father’s Son eventually peaked at number sixty eight on the US Top Country Albums Chart.

After two more album releases in 1995 and 1997 respectively, the artist took a prolonged hiatus from recording before making his return in 2009 with the album, Solo (Songs My Dad Loved). A homage to his late father Hobert Skaggs, the album was also the first under his own independent label, Skaggs Family. Commended for its acoustics and vocals, it showcased many progressive country songsーCity That Lies Foursquare, Calloway and Foggy River are a few that stand out amongst the others. Solo (Songs My Dad Loved) soon found its way onto three separate chartsーthe Top Country Albums Chart (number thirty-nine), the Top Bluegrass Albums Chart (number one) and the Independent Albums Chart (number forty-six).

Going into the 2010’s, Skaggs went on to record two more full-length albums: Mosaic in 2010 followed by Country Hits Bluegrass Style in 2011. Both distributed by his own label, they achieved comparable success, having reached number fifty and number fifty one respectively on the US Country Chart. The artist’s most recent album release was that of Hearts Like Ours (2014)ーa collaboration with fellow country singer, Sharon White. 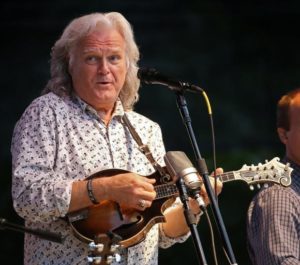 Although he hasn’t released any new music in a few years, don’t count the country artist out of the scene just yet. In September 2016, Skaggs brought with him a few bluegrass tunes to The Great Frederick Fair, which took place at the Frederick Fairgrounds in Maryland. Regarded as one of the top agricultural fairs in the city, the annual event also featured Kentucky Thunder, Skaggs’ own band. During the performance, the singer also announced that they are in fact, currently working on a live albumーalthough further details have not been shared as of yet.

Speaking of Skaggs and his band, the group also headed off to the 20th annual Tallahatchie River Fest in Mississippi earlier this October, where they headlined the celebration. A well known regional event amongst locals, the fall festival celebrates the Tallahatchie River, an 85 mile body of water that flows from Tippah Country to Leflore Country, where it eventually meets with the Yazoo River. Not only did the event see many musical performances, but it also featured multiple vendors as well as a downtown carnival.

If you’d like to stay connected with the county celebrity whom we’ve all grown to love, be sure to give him a follow on his social media accountsーthe fourteen-time Grammy Award winning singer is active both on Twitter (@RickySkaggs) as well as on Instagram (@rickysnaggs). Don’t forget to also drop by his official website (rickyskaggs.com) and Facebook page for some of his latest information!