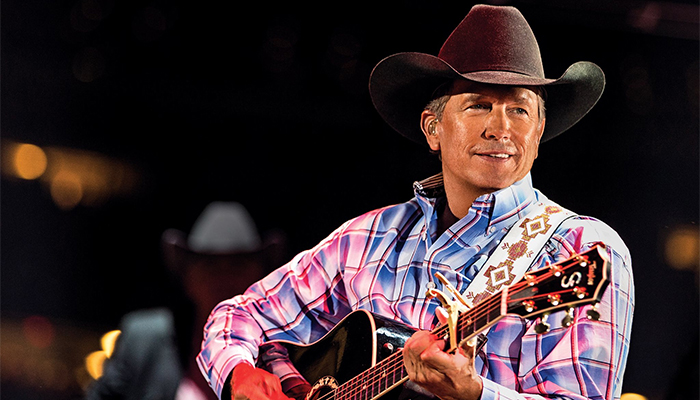 George Strait is considered by many to be one of the most influential country singers of all time. Dubbed as the “King of Country,” Straight is known for his unique neotraditionalist sounds and cowboy looks. Having paved his way into stardom with the release of his debut single Unwound in 1981, he has released well over thirty full-length albums during his thirty years as a music artist. Some of his early records during the 80’s include Straight Country (1981), Strait from the Heart (1982), Right or Wrong (1983), Does Fort Worth Ever Cross Your Mind (1984) and Something Special (1985), amongst several others. A top-selling musician, Strait has sold over 100 million records across the world as of 2015. According to the Recording Industry Association of America, the country star also holds the title of being the 12th best-selling singer in the history of the country.

Highly accomplished, Strait has won an untold amount of industry awards throughout his career. So far, he has received fifteen Country Music Association Awards, eighteen Academy of Music Awards, six Billboard Awards, five Country Weekly Golden Pick Awards, two ASCAP Awards as well as a Grammy Award, and many others. He also currently holds the record for being the country singer with the most number one ranking singles, albums, platinum albums, multi-platinum albums and gold albums; in the music world, Strait is only third behind the legendary Beatles and Elvis Presley. For his contributions, Strait was also inducted into the Country Music Hall of Fame in 2006.

In addition to his recording career, Strait has also made a handful of acting appearances on television and film. He made his debut on the big screens in 1982 when he played a small roll in the American action movie, The Soldier. A decade later, he was cast in his very first lead role in the musical western film, Pure Country in 1992; in it, he portrayed the character of Dusty Chandler, a popular country singer who ends up straying too far from his country roots. Although the production wasn’t a box office success, it provided Strait with the opportunity to branch out into more rock-and-roll sounds in his music. Some of the other projects which he has been credited under include Grand Champion (2002), King of the Hill (2003) and Pure Country 2: The Gift (2011).

What has the record-breaking country star been up to recently? What is he working on nowadays? What happened to George Strait? Where is he now in 2018? 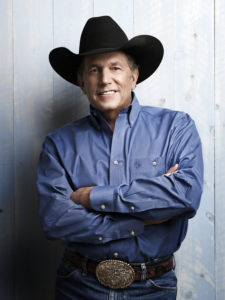 Born on May 18, 1952 in Poteet, Texas, George Harvey Strait is the son of Doris Couser and John Byron Strait, Sr. He has two siblings, a brother named John Jr., and a sister named Pency. Growing up in his parents’ farm, Strait spent most of the weekends and summers of his early childhood working at the ranch tending to the cattle and livestock. However when he was nine years old, his mother and father divorced. This event led to the separation of the siblings; while Strait and his brother (whom he’d affectionately called “Buddy”) moved to live in with his dad, his sister went to live with their mom.

As a teen during the 60’s, Strait attended Pearsall High Schoolーit was during that time that he first began to develop an interest in music. A big fan of The Beatles, Strait owned and listened to many of their tunes and eventually took part in a rock-and-roll garage band at his school. Soon after, he began to venture towards country music, listening to music artists such as George Jones, Hank Williams, Frank Sinatra and Merle Haggard. However his big introduction to the music scene ultimately came in the form of live performances, something which Strait would later describe to have been “very important in Texas”.

At the age of twenty, Strait enlisted in the United States Army and was eventually stationed in Hawaii at the Schofield Barracks. A member of the 25 infantry division, he soon began performing with an Army-sponsored group called the “Rambling Country.” After being honourably discharged from his military services in 1975, Strait went to Texas State University to study agriculture; he would eventually graduate with his bachelor’s degree in 1979. An avid performer of music, Straight also joined a band during his days as a college student called “Stoney Ridge”, which was soon renamed as “Ace in the Hole.” Together, the group would go on to perform at a number of local bars in Texas.

While performing with the band, Strait eventually met and befriended Erv Wooslsey, an owner of one of the bars in which they’d played atーwho had also previously worked for the recording label, MCA Records. Impressed with their music, Woosley convinced some of his contacts to come down to Texas to listen to Strait and his group play. Although the aspiring musicians were initially met with rejection, they later landed a recording contract with MCA after much perseverance in 1981. His friends at Ace would ultimately help to perform the backup instrumentals for his solo career. 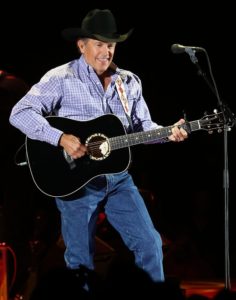 Strait released his first professional recording, a single entitled Unwound in April 1981. Overwhelmed with positive reviews from critics upon its release, it eventually peaked at the number three position on the Billboard Hot Country Songs Chart. It also acted as the lead-off track from his debut album, which was released later that year. Strait Country as the album was called, featured a blend of honky tonk and Bakersfield soundsーa sharp contrast compared to the trends in country music at the time. Featuring ten tracks, the album was given four out of five stars by AllMusic and was described to be “flat-out great.” Following in the success of his single, Strait Country soon peaked at number twenty six on the US Billboard Top Country Albums Chart. Since then, it has sold over 1 million copies and has received platinum certification by the RIAA.

Carrying on with his newfound fame, Strait released his second studio album entitled Strait from the Heart in June 1982. Recorded at the Music City Music Hall in Nashville, the album consisted of ten tracks and eventually climbed up to number eighteen on the Billboard Top Country Albums Chart in the United States. It later spawned four singles: Fool Hearted Memory, Marina del Rey, A Fire I Can’t Put Out and Amarillo by Morningーthis first of which would become his first number one single. Given glowing reviews by music critics, Strait from the Heart has also since been certified platinum. 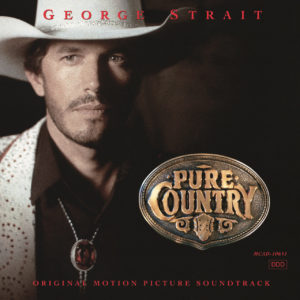 In May 1990, Strait released his first studio album of the new decadeーLivin’ It Up. Produced by Jimmy Bowen and the singer himself, the album included ten songs, one of which was Lonesome Rodeo Cowboy, a song which he had originally recorded with Ace in the Hold back in the 70’s. Topping the Billboard Top Country Albums Chart at the number one spot, Livin’ It Up was praised for its contents and later given a three star rating from Chicago Tribune. The album eventually spawned three singles: Love Without End Amen, I’ve Come to Expect it From You and Drinking Champagne. It has since sold over one million copies in the country.

After going on to release two more records during the first two years of the 90’s, Strait released his major breakthrough album, Pure Country in September 1992; to date, it remains to be his best-selling album, having achieved 6x Platinum status after having sold over 6 million units. As his thirtieth studio album, Pure Country also acted as the soundtrack to a movie of the same nameーit was also his first to be produced in part by Tony Brown. Composed of eleven tracks, the album peaked at number one on the US Billboard Top Country Albums and was met with similar success in Canada where it topped the RPM Country Albums Chart.

Quickly rising in prominence in the world of country music, Strait released his next big release, a box-set album entitled Strait Out of the Box in September 1995. Containing four albums, the set would go on to become the best commercially performing country music box-set of all time, with over 2 million copies sold in the United States. 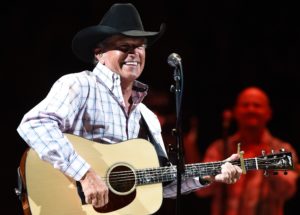 While the country star probably won’t be embarking on anymore tours, that didn’t stop him from performing in a number of concerts in Las Vegas this year. Kicking off on April 22nd at the new T-Mobile Arena, the performance was also Strait’s first show since his announced retirement back 2012. Strait to Vegas, as the events have been titled, is currently scheduled to continue through September and into December and all the way into February with a few months break tucked in between. For those of you who are itching to see the singer up close on the stage, tickets for these exclusive music experiences are still available for purchase!

During the second set of his concerts in Las Vegas, Strait also announced the upcoming arrival of his new single entitled, Goin’ Goin’ Gone. Hailing from his most recent studio album, Cold Beer Conversation from 2015, the single was eventually released earlier this September, although it was made available for purchase on iTunes a couple weeks earlier. The record is also part of the five album deal that he had signed with his long-time recording company, MCA back in 2013.

In addition to him taking to the stage in the bustling city of Las Vegas, Strait has also been invited to perform this September at the Americana Music Awards. At the event, he will be singing in honour of Jim Lauderdale, a multi-Grammy Award winning singer-songerwriter who has helped to pen many of the country star’s songs over the years. On top of that, Strait will also be the one to present Lauderdale with the Americana Music Association Wagonmaster Award, a decoration given to those who have greatly contributed to the history of Americana music. The 15th annual Awards Show is set to take place on September 21st, 2016 at the Ryman Auditorium in Nashville, Texas.

If you’d like to stay up to date with the “King of Country,” you can do so by following him on social mediaーyou can find him on Twitter (@GeorgeStrait)!