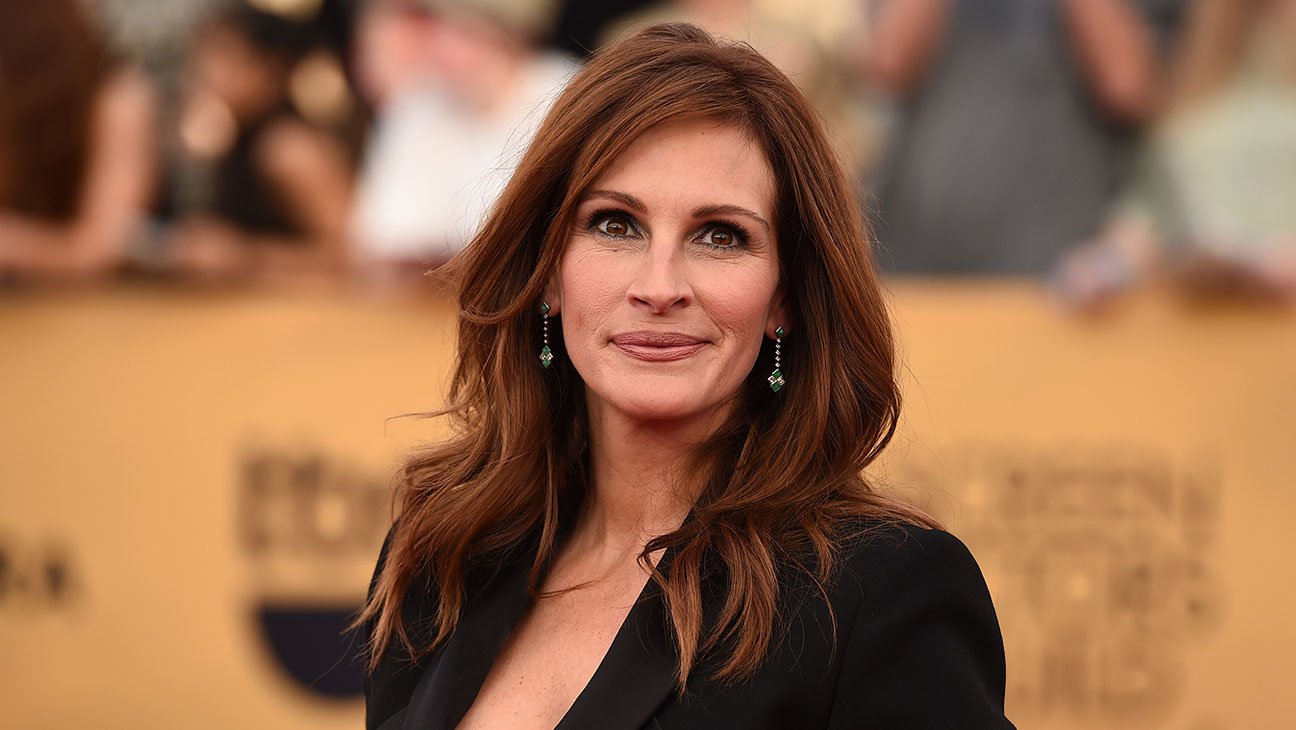 Highly considered to be one of the most successful actresses in the world, Julia Roberts is best known for her portrayal in the American romantic comedy film, Pretty Woman. Since her acting debut in the late 1980’s, Roberts has grown to become one of the most famous and most well-known celebrities of all time. Rated to be the highest paid actress in all of the world during the 90’s and early 2000’s, her estimated worth was a stunning $140 million in 2007! Roberts has also been included in the “List of the 50 Most Beautiful People in the World” by People Magazine, eleven different times! Having first starred on the small screen in 1987 in the drama series, Crime Story, Roberts has made countless appearances in both television and film throughout her career. Some of her early works include Firehouse (1987), Miami Vice (1988), Baja Oklahoma (1988), Blood Red (1989) and Steel Magnolias (1989). However she would gain the most recognition for her role in the 1990 film, Pretty Woman opposite actor, Richard Gere.

Directed by award winning American director, Garry Marshall, Pretty Woman was first released in theatres in the United States in March 23, 1990. Starring Richard Gere, Ralph Bellamy, Hector Elizondo and Roberts herself, the film revolved around a hooker named, Vivian Ward (played by the actress) who is later hired by a well-off businessman to become his escort for a number of business functions. A huge success at the box office despite initial mixed reviews, the movie would go on to gross over $460,000,000 worldwide. Praised for her portrayal of Vivian, Roberts would also win a Golden Globe Award for “Best Actress in a Motion Picture in a Comedy or Musical” later that same year. Despite the fact that Pretty Woman was one of Roberts’ first acting roles, it remains to be one of her best works of all time.

Besides being an established, award-winning actress, the Hollywood star is also a film and television producer. Having first began to work as an executive producer during the late 90’s in the movie, Stepmom, Roberts has been involved in the production of countless films and television series over the years. Some of her works as a producer include Stepmom (1998), Queens Supreme (2003), Samantha: An American Girl Holiday (2004), Kit Kittredge: An American Girl (2008), Jesus Henry Christ (2011), and Extraordinary Moms (2011), amongst others. The actress has also lent her voice to a handful of projects including the animated films, The Ant Bully (2006), Charlotte’s Web (2006) and Love, Wedding, Marriage (2011).

But what has the world famous actress been up to as of late? What happened to Julia Roberts? What projects have she been working on in 2016? 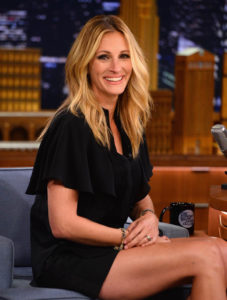 Born on October 28, 1967 in Smyrna, Georgia, Julia Fiona Roberts is the youngest daughter of Walter Grady Roberts and Betty Lou Bredemus. Her parents both came from a performing backgrounds (they were actors) and ran a workshop for aspiring actors and writers together until their separation and eventual divorce in 1972. Roberts has two siblingsーan older sister named Lisa Roberts Gillan and an older brother named Eric Roberts; they are of Swedish, Welsh, German, English, Irish and Scottish descent. Following her parents’ divorce, her mother had remarried a man named Michael Motes when she was five years old; often unemployed and almost always abusive, Roberts would later admit that she’d always despised him. Her mother would later divorce Motes in 1983, citing it to be the greatest mistake of her life.

An avid animal lover, Roberts had wanted to be a veterinarian during her childhood; however she would later give up on the dream to pursue acting. As a teen, she attended Griffin Middle School and would later go to Campbell High School, located in her hometown of Smyrna, Georgia, where she’d be an active member of the school band. Following her high school graduation in 1985, Roberts would enrol at Georgia State University, before dropping out to move to New York City, where she would take the first step in becoming an actress by enrolling herself in acting lessons. 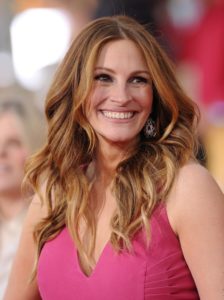 After years of working towards her dream, Roberts would eventually land her first professional acting role in the direct-to-video film, Firehouse at the age of 20. Shortly afterwards, she would appear as a guest star in the  American TV drama, Crime Story, playing the role of rape victimーit would be Roberts’ first role in a television series. Having gained attention as an actress, she later made a handful of minor appearances in the films Mystic Pizza (1988), Miami Vice (1988), Baja Oklahoma (1988), Blood Red (1989) and Steel Magnolias (1989). For her performance in Steel Magnolias, Robert would receive her very first Golden Globe Award that year for “Best Supporting Actress in a Motion Picture” and an Academy Award nomination for “Best Supporting Actress.” However despite the fact that she had garnered widespread attention at the time, it wouldn’t be until her breakthrough role in the romantic comedy film, Pretty Woman in 1990, that she would first achieve worldwide recognition as an actress.

First released in March 1990, Pretty Woman centred around a man named Edward Lewis, who hires an escort named Vivian Ward to accompany him to social events, only to eventually finds himself falling in love with her. Originally planned as a darker, cautionary story about sex work, the film’s premise was later rewritten and changed to become a romantic comedy. Despite having received mixed reviews from critics, the movie would go on to become one of the largest box office successesーhaving sold over 42,000,000 tickets domestically and garnered over $460,000,000 across the globe. Considered to be one of the most popular movies of all time, Pretty Woman has also won a number of award nominations including a Golden Globe Award for “Best Motion Picture” in 1991. For her highly praised portrayal of Vivian in the film, Roberts also won a multitude of awards and nominations, including a Golden Globe Award for “Best Actress in a Motion Picture” and an Academy Award nomination for “Best Actress.”

A year after the success of Pretty Woman, Roberts would go on to star in her first psychological thriller film titled, Sleeping with the Enemy. Based on a 1987 book of the same name by author Nancy Price, the movie revolved around a woman named Laura (Played by Roberts) who left her beautiful beach home in Cape Cod, to escape the grasps of her abusive husband, Martin (played by Patrick Bergin). Released in U.S. theatres on February 8, 1991, Sleeping with the Enemy would be yet another box office success for the actress, having grossed over $170,000,000 worldwide despite its negative reviews.

Having achieved celebrity star status, the actress would continue to appear in a number of movies and television series throughout the 90’s and 2000’s, including Erin Brockovich in 2000, which would eventually earn Roberts a series of awards and including her first Academy Award win for “Best Actress.” Based on a true story, the film focuses on a single mother who works to become a legal assistant, in order to fight and bring down PG&Eーa California Power Company, which had polluted the water supply of the city. Released in March 17, 2000, Erin Brockovich would be a huge commercial hitーhaving earned over $257,000,000 worldwide; the film would also receive two Academy Award nominations for “Best Picture and “Best Director.”

Carrying on with her acting career, Robert would then act in the comedy film, Ocean’s Twelve in 2004. As a direct sequel to Ocean’s Eleven, the film revolves around Daniel Ocean, a slick con-artist, who gathers his crew together once again for three European heists. Starring big name actors George Clooney, Matt Damon, Brad Pitt, Andy Garcia, Catherine Zeta Jones, Bernie Mack and Don Cheadle, the movie would be a huge commercial hit, having grossed more than $362 million on a $110 million budgetー it would also be the tenth best film at the box office in 2004. In spite of its generally mixed reviews, Ocean’s Twelve would receive a Critic’s Choice Movie Award nomination that year for “Best Acting Ensemble.”

Fast forwarding a bit, the actress’ next big role would be in the dark comedy film, August: Osage County. Built on the award winning production of the same name, the movie features Ewan McGregor, Meryl Streep, Chris Cooper, Benedict Cumberbatch, Margo Martindale, Julianne Nicholson and Dermot mulroney in its ensemble cast. Directed by John Wells, the film centred around the members of the Weston familyーwhom after a family crisis, finds themselves back in their childhood home in Oklahoma face to face with the dysfunctional mother who had raised them. Released on December 27, 2013, August: Osage County would be praised for its screenplay and cast performance. For her portrayal of Barbara Weston, the family oldest daughter, Roberts would receive an Academy Award nomination for “Best Supporting Actress” later that year. 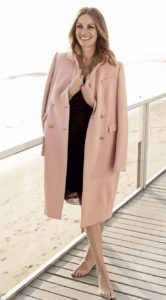 Adding to her already-very-long filmography, Roberts has starred in two films this yearーMother’s Day and Money Monster. Released on April 29, 2016, Mother’s Day features an ensemble cast and tells the story of how three generators gather today in the days leading up to Mother’s day. Directed by Garry Marshall, the film starred Jennifer Aniston, Kate Hudson, Timothy Olyphant, Jason Sudeikis, Jack Whitehall, Britt Robertson and Hector Elizondo; it would also be the final film of director, Garry Marshall’s career. Despite mixed reviews by critics upon its release, Mother’s Day would go on to gross over $43 million at the box office with a $25 million budget.

Robert’s second 2016 film, Money Monster is about a television host named Lee Gates, who finds himself in a dire situation along with his producer Patty after a studio takeover. Starring actor George Clooney as the main protagonist, the film would also include Jack O’Connel, Dominic West, Giancarlo Esposito, Caitriona Balfe and Roberts herself. In it, the actress plays the role of Patty Fennーthe longtime director friend of Lee Gates. After an initial delay, the movie was released in theatres in the U.S. on May 13, 2016; it has since grossed over $93 million.

Besides films that have already been released, the actress has also been busy with the filming of the upcoming drama movie entitled, Wonder. Based on a book of the same name by author R.J. Palacio, the film will revolve around the parents of a young boy named August Pullman, who finds himself struggling to overcome a facial deformity with which he had been born with. In the film, Roberts will be playing the role of August Pullman’s mother, Isabel, while actor Owen Wilson will be playing that of his father, Nate. Currently till in production, Wonder is scheduled to be released in theatres on April 7, 2017.

While the Hollywood Star has opted to “stay off” many social media platforms, you can still find the actress online on her official Instagram account (@juliarobertsoriginal)! You can also follow her fan club over on Facebook to keep up with her latest news.