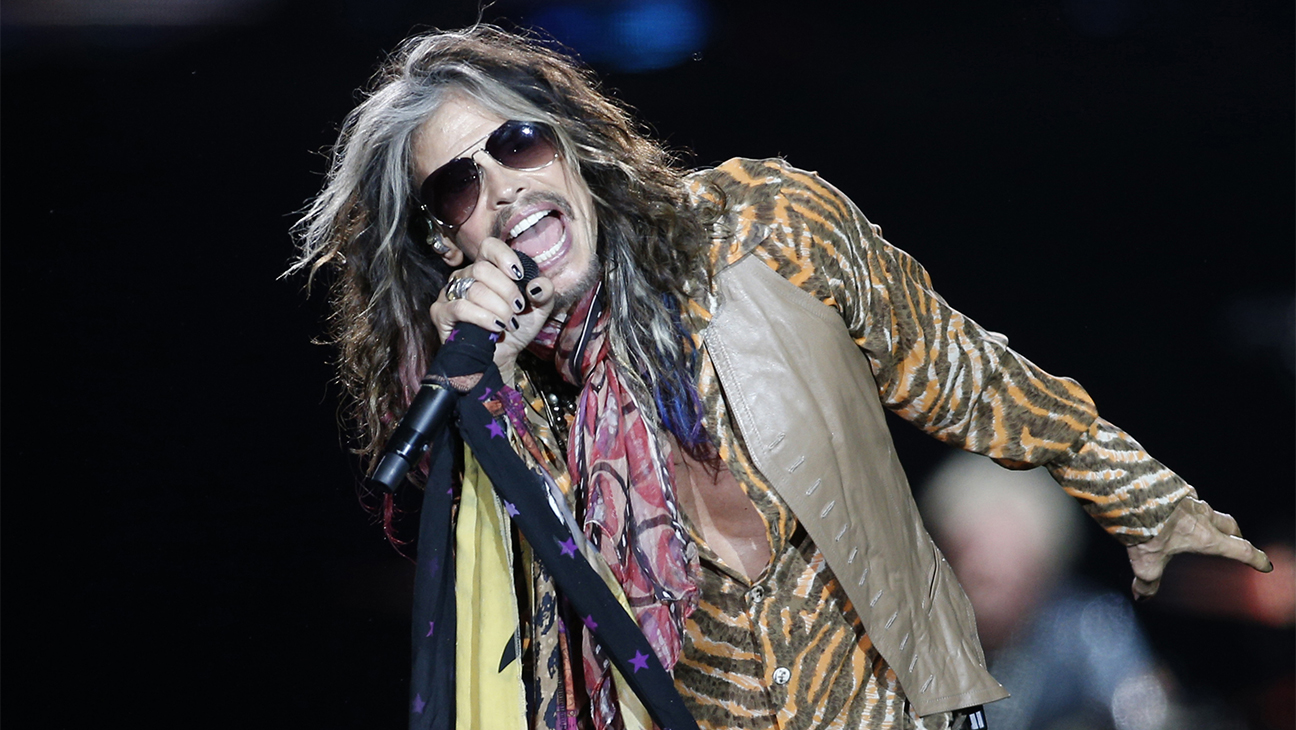 Steven Tyler is an American singer who is best known for being the lead vocalist of the rock band, Aerosmith. The son of a classical musician, Tyler demonstrated his knack for music at a young age having played the drums when he was in grade school. In a fateful meeting at a local rock show during the late 60’s, he met his future bandmates and together they started a band called, Aerosmith. Since their inception, the group has released thirty two albums and seventy six singles. Some of their popular works during the 70’s include: Get Your Wings (1974), Toys in the Attic (1975), Rocks (1976), Draw the Line (1977) and Nights in the Ruts (1979). As of 2013, Tyler along with his band has sold over 150,000,000 albums worldwide and over 66,000,000 in the United States.

Regarded as one of the hottest rock-bands during the 80’s and 90’s, Aerosmith has won numerous awards throughout their time together including ten MTV Video Music Awards, four Billboard Music Awards, four Grammy Awards, six American Music Awards, two Teen Choice Awards and numerous others. In addition, they’ve also received a number of nominations including seventeen for the Grammy Award, ten for the American Music Awards, thirty six for the MTV Video Music Award, six for the Boston Music Awards, amongst numerous others. Recognized for his impressive vocal range, Tyler has been listed by Rolling Stone to be one of the “100 Greatest Singers of All Time.” In 2001, the lead singer of Aerosmith was also inducted into the Rock and Roll Hall of Fame with the rest of his band.

Besides his work with music, Tyler has also been involved in a list of television and filmーincluding a role in the singing competition series, American Idol as a judge, one which he has continued for many years. Some of his acting roles over the decades include: Clubland (1999), The Polar Express (2004), Stacked (2005), Two and a Half Man (2006), Wonder Pets! (2010) and Nashville (2015). A frequent performer, Tyler has also made countless appearances on television talk-shows including Jimmy Kimmel Live! (2012), The Tonight Show with Jay Leno (2012), The Jonathan Ross Show (2012), Late Show with David Letterman (2012) and The Talk (2014). In 2013, he also participated in a mini documentary series entitled, The ’80s: The Decade That Made Us as himself.

What has the rock star of Aerosmith fame been up to as of late? What happened to Steven Tyler? Where is he now in 2018? 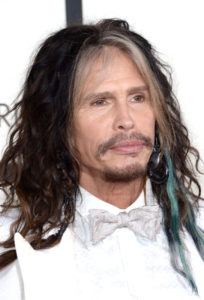 Born on March 26, 1948 in Manhattan, New York, Steven Victor Tallarico is the son of Victor A. Tallarico, a pianist and music instructor and Susan Ray, a secretary; he has an older sister named Lynda and is of German, Italian, English and Polish descent. When Tyler was three years old, he moved with his family from his native Manhattan to the Bronx County; they later relocated once again when he was nine years old to Yonkers. As a teen, Tyler was a student at Roosevelt High School however was soon expelled after being caught involved in drugs. Not long after that, he enrolled at the Jose Quintano’s School for Young Professionals, from which he eventually graduated from.

The son of a musician, Tyler had always been around music growing up his entire life. Having taken a liking to the blues, he eventually became involved with a few bands during the 60’s as both a drummer (something which he’d taken up as a child) and a singer, including “The Strangeurs” and “Chain Reaction.” When he wasn’t performing his music, he was working a few odd jobs including at the local bakery to help make ends meet. After having had a brief feel for the band life, Tyler met his future bandmates at a fateful local rock show in New Hampshire. Coming together with their love for rock music, the group soon formed their own band called the “Aerosmith.” Following that, they eventually moved to live in the same apartment in Boston and played their first gig together in 1970.

The band subsequently began performing at a number of local venues and clubs in Boston under their initial music manager, Frank  Connelly. Wanting to take them further, he later arranged for the Aerosmith to showcase their talents to a group of record company executives. Impressed by what they presented, Columbia Records ultimately offered them a record deal in 1972. 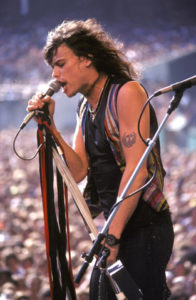 In January 1973, Aerosmith released their eponymous debut album, Aerosmith. Recorded in the fall of the previous year, the album consisted of eight tracks, all of which were composed and written by Tyler. Despite not having been an immediate success after its release, Aerosmith did manage to chart at number twenty-one on the Billboard 200 in the United States. Although they weren’t reviewed by the Rolling Stone, much to the band’s disappointment, they were given a three and a half star rating from Allmusic which described their music to sound “as though they were the best bar band in your local town.” The album later spawned three singles: Mama Kin, Dream On and Make It. Since then, it has sold over 2 million copies in the country and has been given Double Platinum Certification by the RIAA.

Carrying on with their recording, they released their second studio album entitled, Get Your Wings in March 1974ーit would also be the first to feature music producer, Jack Douglas. Featuring eight songs, including the title track Same Old Song and Dance which was written by Tyler and Joe Perry, the album peaked at the number seventy-four spot on the Billboard 200 a few weeks after its release. Met with favourable reviews from critics, the album was praised for its sounds and given a four star rating from the American music magazine, Blender. Three singles,  S.O.S. (Too Bad), Same Old Song and Dance and Train Kept-A-Rollin were eventually produced from the album, although none of them would go on to chart.

Tyler and his Eventual Breakthrough with Aerosmith in the 70’s 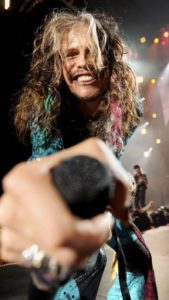 While Aerosmith had made their presence known at the time, it wasn’t until 1975 that they broke into the mainstream with their third full-length album, Toys in the Attic. Still their best-selling album to date, it was recorded over a period of three months at the Record Plant in New York City. Including some of the band’s best known songs, the track list included the major hits Sweet Emotion, Walk This Way and You See Me Crying. A huge commercial success, Toys in the Attic peaked at number eleven on the US Billboard 200 Chart and performed similarly in Canada where it climbed to the number seventh position on the RPM 100 Albums Chart. Aerosmith’s most successful album to date in the US, it has since sold over 8,000,000 copies and has received 8x Platinum status by the RIAA as of 2002.

Bathing in their newly found fame, the band released their fourth studio album, Rocks in May 1976. Described by AllMusics to have “captured Aerosmith at their most raw and rocking”, the album included nine tracks, one of which was later featured in the feature films The Fighter and Shanghai Noon. A charting success, Rocks peaked at number three on the US Billboard 200 Chart; overseas, it also performed fairly well having peaked at number fourteen in the Top Albums Chart in Canada and at number thirteen on the Japanese Albums Chart. Overwhelmed with glowing reviews from critics, the album has since been listed onto Rolling Stone’s list of “500 Greatest Albums of All Time”. It is also known to have influenced many rock musicians over the years including Metallica and Guns N’ Roses.

After a series of album releases throughout the 70’s and early 80’s, Aerosmith released their next big album, Pump in September 1989. Produced by Bruce Fairbaim, the album was critically acclaimed upon its release and later garnered the band their first Grammy Award for the category of “Best Rock Performance by a Duo or Group with Vocal” with the single, Janie’s Got a Gun. To date, it is also their only album to have spawned three top ten singles on the Hot 100 Chart and three top singles on the US Mainstream Rock Tracks Chart. The fourth best-selling album of 1990, Pup has since sold over 7,000,000 copies in the USーmaking it Aerosmith’s second best-selling full-length album in the country.

The Beginning of Steven Tyler’s Solo Music Career in 2015

After decades of performing with the band, Tyler announced that he would be embarking on a solo music career in 2015. Following a record deal with Dot Records, the singer released his first solo single, Love Is Your Name in May 2015. Recorded at Blackbird Studios, the record was promoted on 120 mainstream radio stations across the country on the day of its release. Love Is Your Name debuted at number thirty three on the US Country Airplay Chart and at number twenty seven on the Hot Country Songs Chart, eventually selling over 25,000 units during the first week. 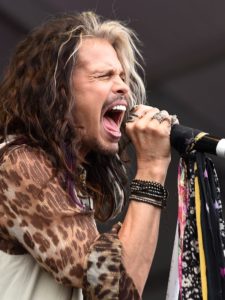 Undoubtedly a busy man, Tyler has spent most of this summer performing with Loving Mary on their “Out on a Limb Tour”, which began in July and is scheduled to end later in September. But there’s moreーhe will also be rejoining his longtime band, Aerosmith for their Latin America Tour later this fall, which is set to kick off at the Parque Simon Bolivar in Bogota, Columbia and continue until late October of this year at the Arena Ciudad de Mexico in Mexico City. Speaking of Aerosmith, the group has also announced this June that they will be holding a “Farewell Tour” in 2017, after which they will ultimately go their separate ways. In addition to the tour, there has also been talks about the band releasing one final studio album together prior to their disbanding.

If you’d like to stay up to date with the American rock star, you can do so by following him on social mediaーyou can find him on Twitter (@IamStevenT) or on Instagram (@iamstevent). Alternatively, you can also visit his official Facebook page!