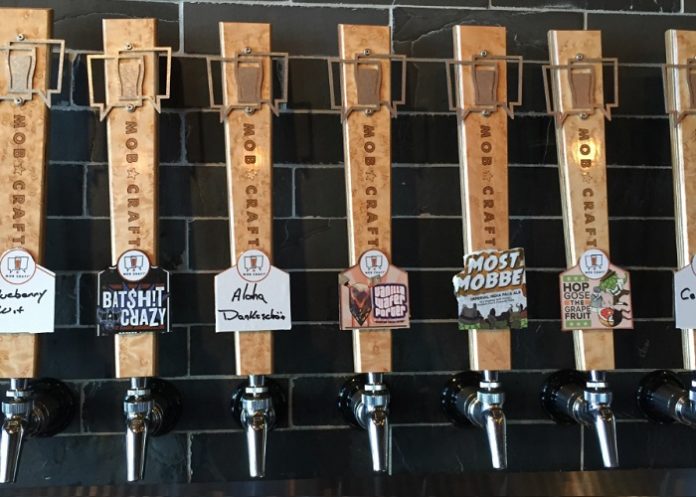 If someone gave me a dollar for every time I’ve heard an entrepreneur say they’re passionate about their product on Shark Tank, then I’m fairly sure I’d be able to buy the drinks all night for a small group of friends, but when MobCraft Beer founder Henry Schwartz appeared on the show, in March 2016, he proved to at least one shark that his passion for craft beer far exceeded his desire for funding.

Craft Beer is a fairly unusual product, in that the way it is made is often just as important as the final product itself. Unlike a micro-brewery, which is often confused with a craft brewery, limitations are commonly set on the techniques and equipment used to produce the final product, and unlike a micro-brewery, craft beers always contain at least 50% malt, rather than other supplements such as barley, oats, and wheat.

The MobCraft Beer segment on Shark Tank opened with a short introduction to MobCraft beer, where Henry, from Madison, Wisconsin explained that he and some friends had begun experimenting with making their own beer while back in college. Their customized brews had proved so popular amongst friends that it wasn’t long before they were increasing the batch sizes, until eventually they ended up running their own craft brewery, but now in order to take the craft beer business to the next level, they needed a hefty injection of cash to set-up their own production facility.

Henry walked into the tank and announced to the sharks that he was looking for a $400,000 investment in exchange for 16% of the MobCraft Beer business, valuing the company at $2.5 million. He launched into a confidently delivered pitch that explained the special relationship between MobCraft and its customers. New beers were suggested online by customers, and those suggestions were then voted on. Henry revealed that this crowd-sourcing business approach gave customers not only input on which beers would be produced next, it also gave them a special connection to the beer, and the MobCraft company. 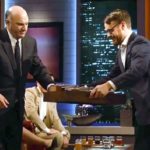 The sharks listened to the pitch without giving any indication as to how they felt about the idea behind the business, but they perked up a bit when Henry announced he had a selection of samples for them all. Every shark received a flight of six small samples and their reactions were interesting to say the least.

First of all came a chocolate and coconut wheat beer, a previous winning suggestion from MobCraft’s crowd sourcing customers. Robert Herjavec was quick to assert ‘That’s really good’, Lori echoed his words exactly, but Mark Cuban wasn’t so impressed ‘That’s a weird taste’ he said, looking into the glass as if it contained some kind of poisonous substance.

The next beer was up, and Henry revealed it contained grapefruit. Mark Cuban looked slightly disgusted, but Robert Herjavec was again quick to assert how great it tasted. This time it was Daymond John who saw things differently, the FUBU boss pulled a face and voiced his complete lack of enjoyment of the grapefruit beer.

Next came a beer that won the silver medal in the 2015 Great American beer festival, and it sounds like a wonderful dream to a caffeine addict like me, beer with coffee. Robert Herjavec sounded as excited by the concept as I was. Mark Cuban however let out what can only really be described as a squeal of disgust. As Kevin O’Leary sipped the drink without comment, Henry revealed that the beverage contained over 5% of the finest coffee beans, Mr Wonderful said nothing, but regular fans of Shark Tank would probably guess that he was at least fairly impressed with the taste by his lack of reaction. Kevin confirmed that was the case, commenting ‘It’s very tasty’. Lori Greiner was getting into the idea now too, when the next beer, containing vanilla, was sampled she was the one who was impressed, ‘This is absolutely fabulous’ she remarked, but for once Robert was the one who found the taste ‘Awful’.

It was becoming clear that personal tastes differ greatly amongst individuals, even when they are all hard-headed sharks, but the last two beers provoked the strongest reaction yet. The final samples were both sour beers, and although they can sometimes be heralded as the epitome of taste and flavor by aficionados of craft beers, they are generally less well-received by those of us with more conventional tastes. The word vinegar was mentioned at least once, Mark Cuban actually took the step of standing up and seemingly spitting out his sample behind his shark chair, and with the exceptional of a small voice of support for one of the sour beers from Robert Herjavec, they were very much a miss for the sharks. Henry took it all in his stride, obviously having experienced such diverse reactions to his beers before.

With the excitement and drama of the sampling out of the way it was down to business in the tank. Mark Cuban and Robert Herjavec probed Henry for more details of how the crowd-sourcing system for new beers worked. Henry explained that a new beer would be suggested, and would be included in the vote for the next craft beer. Whenever someone voted for that beer on the MobCraft website they would agree to purchase at least $25 worth of the product, that way MobCraft could guarantee that they would be able to achieve reasonable sales on every unique drink they produced.

The question of previous sales came up. Henry revealed that the business had achieved orders totalling $350,000 in the past, and $280,000 of that had been in the last twelve months. He confidently told the sharks that he projected sales of at least $500,000 by the end of 2016, and they looked fairly impressed, but when Daymond inquired what sort of profits would come from the half a million in sales the news was less positive. Henry revealed that Mobcraft would probably run at a loss of approximately $28,000 that financial year, mainly due to the building and equipping of the businesses new brewery, located in Milwaukee, that was due to open in late 2016.

Henry had dealt with the overly dramatic reception to his products well, and had effortlessly fielded the sharks questioning of the finances behind his business, overall the entrepreneur was doing well in the tank. Lori Greinier asked him what his background was and he revealed that he had been encouraged to take over his local skateboarding store aged just 15, and he had done so, turning the failing business into a success over the next three years, it was an impressive tale and showed the sharks that Henry had always been quite an effective businessman, but the niche aspect of the craft beer market was still giving them cause for concern.

Robert Herjavec inquired if MobCraft ever sold beer via traditional retail methods, rather than exclusively online. Henry told him that that MobCraft beers were sold in seventy five liquors stores throughout Wisconsin, and about sixty five bars. Daymond asked if the traditional sales were going well, Henry assured him that the sales were growing, and the brand was becoming more established within the state. He revealed that a four pack of beers, costing about $28 to produce, could be sold for $48 in liquor stores, and third-party retailers would often request a lower commission figure due to the businesses specialist craft brewery status.

Robert Herjavec became the first shark to drop out, he told Henry he just ‘wasn’t a beer guy’. He had enjoyed some of the samples, but he wasn’t going to invest. Lori Greiner quickly joined him, again asserting that she had loved the vanilla infused beer, but she couldn’t see herself investing in the business. They had both been fairly diplomatic when dropping out of the negotiations, but Daymond John was a little more direct, telling Henry ‘I hate beer, I can’t help you, I’m out’. Henry as usual was taking the disappointing loss of three potential shark investors in his stride, but it must have been a sobering experience for him, and his smile seemed a little forced by now.

Mark Cuban had been the most dramatic during the turbulent sampling session, so it was no real surprise when he told Henry that although he loved beer, he was more of a ‘Bud light’ kind of drinker. He wished the brewer well in the future, but he was out too.

Only Kevin O’Leary was remaining, and he loved the model and asserted that he could help Henry ‘make millions’, but the MobCraft strategy of investing in their own brewery at enormous expense, rather than using excess manufacturing capacity at other breweries, was a huge flaw in his eyes. He clearly wanted to invest in the ‘wonderful model’ that Henry had tapped into, but the insistence on MobCraft using their own production facilities was a ‘shame’. Henry refused to give into temptation, asserting that his craft beer would always be made in-house. The two men refused to budge from their individual viewpoints, and eventually agreed to disagree, with Kevin somewhat cryptically telling Kevin he wanted to spank him ‘Like a baby seal’ before he dropped out. Perhaps it was the beer talking.

MobCraft Beer Now in 2018 – The After Shark Tank Update

The MobCraft website saw a surge of interest from the 5.5 million viewers who watched the segment on Shark Tank. Traffic to the website was forty times the normal level while orders more than tripled. There were plenty of new recipe submissions too, more than fifteen times the usual amount. Many of the customers had nothing but admiration for Henry’s commitment to keeping his own production fully under his control, to the craft beer community, it really is more important than the money. Many craft beer enthusiasts noted that the sharks had been unprofessional, overly-dramatic and even immature during filming, and their insistence that they were not ‘Beer guys’ had shown their lack of understanding of the entire craft beer market.

As Henry Schwartz told Kevin O’Leary during the show, there’s a big quality control issue in using another businesses facilities, and to the purist brewing tenets of the most popular craft breweries, there’s nothing that will turn away a loyal customer quicker than just one batch of sub-standard beer. The MobCraft segment displayed what happens when big business comes up against a niche market with a highly discerning customer base, to which production methods are part of the appeal, and not just a process that produces the goods.

Now in late 2016, Henry and his business partners have finally achieved their dream. The MobCraft Beer Taproom and Brewery, located in Milwaukee, held its grand opening at the beginning of October 2016, and reviews from locals and craft beer enthusiasts alike have been overwhelmingly positive. Although the Shark Tank may have been a temporarily sobering experience for Henry Schwartz and the MobCraft business, Kevin O’Leary may well be the one suffering from something like a hangover, as MobCraft continues to craft a well-respected niche in the multi-billion dollar beer market.