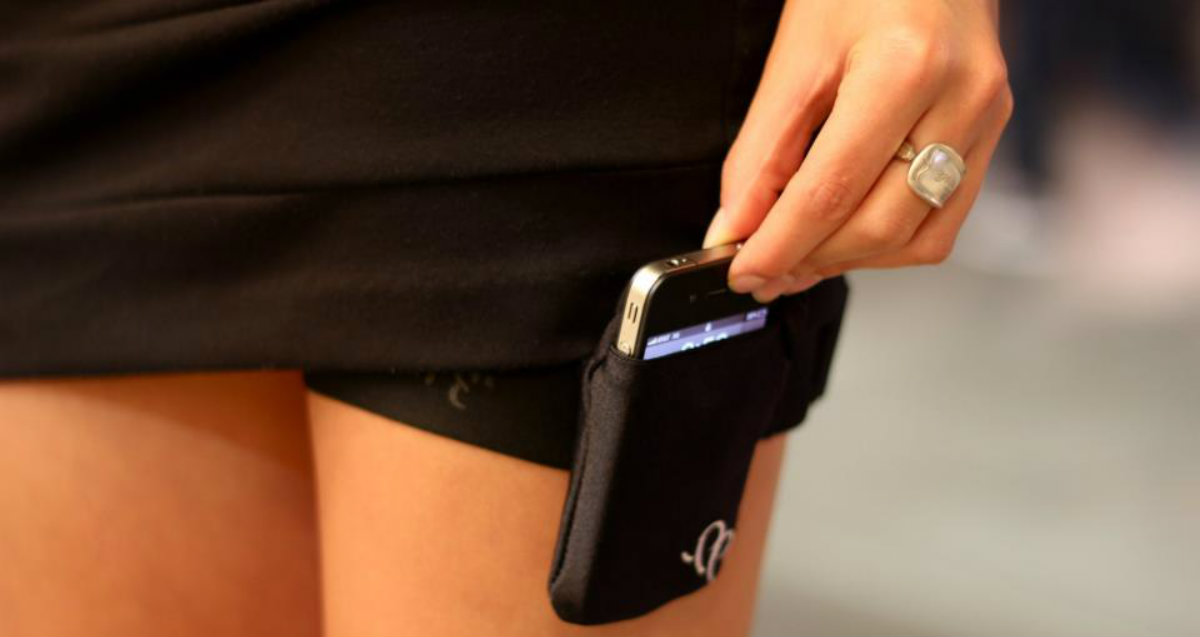 The two entrepreneurs told the Sharks that they were both students at Loyola Marymount University. Jillian said that she was pursuing a double major in accounting and finance, Connor is getting an MBA. Jillian used to to live with a bunch of sorority girls.She said that she witnessed firsthand none of her sorority sisters with stuff their phone, ID, and cards into their bras in order to avoid carrying a purse. Jillian came up with a solution, called the Partie Poche. Would the Sharks bite? Let’s take a look. 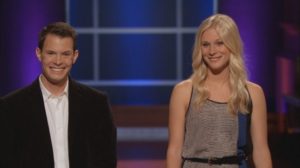 Connor Pastoor and Jillian Jaccard walked out onto the Stage and into the Shark Tank. Jillian introduce both of them, and it and said that they were the owners of the party Posh group. They’re looking for $100,000 in exchange for 20% equity in the company. Robert looks shocked, and asked if that was really the case and Gillian confirms that it was. Connor said that their product the party posh was an innovative nightlife fashion accessory, is Jillian lifted up her dress a little and turn to the Sharks. She revealed small holster on her thigh, which was the Partie Poche. Connor said that it would replace a purse or handbag by putting all of the items that a woman would need throughout the night on her leg. The camera panned to display of the different items on the table.

Jillian continued, saying that no one wanted to carrying around a bulky handbag when the entire purpose is going out tonight was to dance. Jillian said that in addition to The Party Pouch being adorable, it was also very lightweight and she forgets that she’s wearing it at times. She said that she was also a member of the target market, and could assure the Sharks that it would sell.  Barbara said that the items would sell. Indicating that they didn’t have any sales. Barbara asked if that was an incorrect assumption. Jillian said that they’d sold 200 units on their website. Connor agreed, saying that they had sold the Partie Poche throughout the country. Barbara want to know how people were able to find their website, since they didn’t word a recognizable brand. Connor told her that it was because people were looking for an active way to solve the problem of carrying around a bulky purse.

Daymond want to know how much each unit sells for. Connor said that the majority of the pieces sold for $17, and Jillian explains that they started to bump up the price to $39 at the end of their first run. 27 of them were sold at the $39 price point Daymond continued asking if there’s anything for proprietary about the design or the product. Connor said that they had a provisional patent. Kevin asked them to tell him what their valuation was based on their ask of 100000 dollars in exchange for 20%. Color tried to dodge the question but Kevin was having none of it. Kevin told him that Professor O’Leary wanted to know the answer, and Conner tried to dodge again. Kevin wanted to know if he was ducking because he knew the valuation was crazy. Kevin said it was crazy to try and value a company that was pre Revenue.

Connor told the Sharks that their manufacturer told them $4 per unit. Jillian continued saying that they had the inference infrastructure currently to handle the 200000 units that you talked about. Daymond told well what they were saying sounded really good, it was actually worth nothing. It was all speculation. Conner tried to say that’s why they didn’t want to valuate it before the business actually made money. Daymond said that didn’t matter either, saying that they were still trying to get a half-million-dollar evaluation because of their investment ask.

Jillian told them that they had a meeting with the Vice President of Sales at Nordstrom’s, we love the concept. Kevin asked if the vice president had put them in touch with the buyer. Jillian said that they didn’t want to put them in touch with the buyer until they have the final product. Daymond said that of course it was the case, because they are putting a 5 hundred-thousand-dollar valuation on what is essentially a piece of Hose are in a bag. Kevin asked him if he was saying that the only thing that matters was money, and Daymond agree that he was. Kevin said that he could take it from there. He called Jillian and Connor insane, and told them that their idea was not worth $500,000. Kevin said that there is no way that he would  give them $100,000 in exchange for 20%, because that might be what the whole thing is worth.  Jillian wanted to address that, but Kevin told her that there was nothing that she could say. Jillian ignore that, and told them add $50,000 and need in their account at the moment. Robert ask them where they got it from. Told the but two different people bought in before they even had a product.

Kevin ask them how much of the company they sold in exchange for that $50,000. Jillian told him 40% of the company was gone. And Connor scrambled to say but he and Jillian were 60% stakeholders and their own business.  Kevin looked flabbergasted. Jillian tried to say that they had nothing at that point, and with that money they were able to get a distributor, and a designer. Connor said that they were managing partners. Kevin asked if they were crazy, saying that they were coming in here and tried trying to charge a Shark 10 times more for the same thing. Came and asked if they had any purchase orders to show the Sharks and Jillian said that there was one waiting. she said that someone ordered 24000 units, but Jillian did not have a product to give to her at that time.

Kevin again called them insane for asking him to pay 10 times the amount that someone else did. Jillian wanted to discuss what the other investors Bart brought to the table. She said that they found them a designer, and also brought a well-oiled supply chain, but she kept repeating as the Sharks told her that was meaningless. Daymond asked her what she thought the factories existed 4. Kevin expressed a concern that a lightning bolt was going to come down from the ceiling and fry them because they had an overly inflated valuation. He said that he was out. Not only that, but he forbid any of the Sharks from getting involved. Jillian said that she is going to double back, and talk about the demand again. She told Kevin that the $500,000 valuation wasn’t nearly enough. Jillian said that she could sign a $124,000 purchase order next week, so she did not want to give up 20% of the company in exchange for $100,000 after all.

Daymond told her that her 6 goal was preventing her from listening to them. Daymond said that he had about 10 apparel companies, but even he could not get $125,000 opening order on a new product line he said he just it just doesn’t happen. Daymond said that the retail Market worked by companies trying out a small order first, and then coming back if it worked. He told her that everything that she said was Theory, but it did not have practical application. Said that they were being arrogant by being flippant about the ability to get orders, when they hadn’t actually sold anything. Robert said that they’ve done everything except actually get dirty in the business.

Connor said that he understand where Robert was coming from, but he was absolutely willing to put in the 80 hour weeks to get things done. He tried to tell the Sharks that they were really buying the entrepreneurs time and passion. Robert said that didn’t really matter who they new, or what connections they had in the real world. He told them to get some sales, and he went out.  Daymond and Robert laughed at them, and Kevin said that the real world was going to eat them alive. Connor said that they would be kicking themselves because they didn’t get in with the Partie Poche. Barbara told them that she didn’t think the Partie Poche would sell, and they’re wild-eyed enthusiasm makes them blind. Jillian try to talk over her, but Barbara said that she didn’t feel listen to. She went out. Julie and looked upset, saying that she put her whole savings into the company. Daymond’s just smirked and said that life is a cruel teacher. He went out.  Jillian tried to address Mark, but he put a finger to his lips. She tried to continue, but he made a swishing noise. Mark told her to ignore everything that the other Sharks just said because they were a hundred percent wrong.

Mark said that they reminded him of himself when he was 21 years old, trying to win every battle in the war. Mark said that he tried to ask the questions that would educate him about their strategy. Mark asked for a 10-second explanation of what their infrastructure it looks like. But they had a design that they can expand make different designs and colors. Mark asked how long ago they sold those 200, and Jillian told him 6 months ago. Marcus why they didn’t continue to sell the product on their website, and Jillian said that they ran out of inventory. Mark wants to know why they didn’t use the $50,000 that they had in the bank in order to fulfill the orders. Jillian told him that they couldn’t make any more of the ones that they sold because it was with a small freelance designer. Mark wants to know what got them from selling nothing to the 200000 units. Mark said that he was hoping that he could prove the other Sharks wrong, but he wasn’t able to. They didn’t have a clear plan. He went out. Jillian tried to stop him before he went out, but he said that there’s no negotiation on that. Jillian still try to talk over him but Mark interrupted her. He wished her good luck. they smiled and walked off stage. Once they walked offstage, Kevin said that the most important thing that happened in that pitch was that Mark was wrong and the rest of the Sharks were right. Mark gave him that one, and Robert look surprised.

Partie Poche Now in 2018 – The After Shark Tank Update 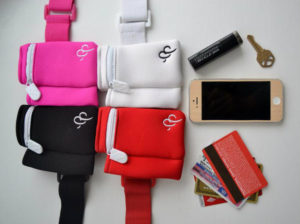 Since they lost on making a deal with the Sharks, it seems like Partie Poche has gone the way of so many other Shark Tank failures. Their Facebook page has not been touched since 2013. Before falling off the face of the Earth, they put out a new line of their purse holsters. They stopped responding to hopeful customers in November of 2013.