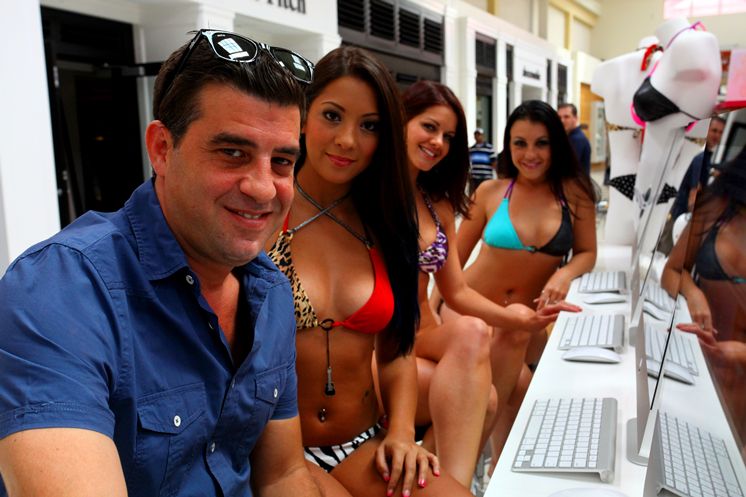 Frank Scozzafava and Adam DiSilvestro are two men who decided to tap into the women’s swimsuit market. There is no denying that once summer rolls around, people go crazy over every opportunity to show off their “bikini bodies” that they spent all winter long working on perfecting. Both Scozzafava and DiSilvestro realized that having multiple bathing suit options is always a good thing, and that is why they decided to create an original brand of Bikini’s that make it possible to mix and match so many different bathing suit styles and prints.

In total, the Mix Bikini brand allows for up to 500 different bikini combinations. This idea for the line really seemed to be a hit with the women that had made purchases from them, but Scozzafava and DiSilvestero wanted to take their brand to a whole different level. They wanted someone with extensive marketing and business knowledge to come into a partnership with them, because they needed someone with more experience to help guide them in the right direction.  What better place to look than ABC’s Shark Tank? The two men put a presentation together and headed off to the Tank in hopes of snagging a deal.

The two partners enter the Shark Tank seeking a $50k investment in exchange for a mere 5% of their Mix Bikini brand.  After giving them their price, they begin to explain where the idea for the company stemmed from. They claim that women love their swimwear, but that it’s the “worst feeling in the world” when they are on the beach and happen to spot another woman wearing the same one as her. According to them, Mix Bikini is there to solve that problem. All pieces of their clothing are sold separately, therefore meaning that the more pieces a woman collects from their brand, the more bikini options she will have. The Mix Bikini is also the first interchangable swimsuit line.

The process of ordering a custom Mix Bikini is also pretty simple. On their website, there is a list of steps that allows you to choose the kind of top you want, then mix and match all the different prints and colors to go with it. The same goes for the bottoms. And the best part of it is, whenever said customer wants to switch up her bikini look, she doesn’t have to buy a whole new bikini set. All she needs to do is purchase the piece that she wants to change on her bikini. In example, she could just buy a new left part of the bikini top or a new back piece for her bottoms.

Robert Herjavec is the first to start asking questions, and he wants to know what their current sales look like. Scozzafava and DiSilvestero confess that as of right now, they have not made that many sales yet, but that is only because they just made a soft launch for the business not too long ago. However, they have made a few sales since opening, just not as many as they believe they will be making in the future. Then Barbara Corcoran inquires on the actual price for the bikinis so she can get a clearer picture of what kind of money they will be making once they actually get the business going. Each part of the bikini sells for $9.99 so if you were planning on purchasing an entire bikini, it would cost anywhere between $40 to $50.

As of right now, Mix Bikini is an exclusive online store, but Scozzafava and DiSilvestero do not plan to keep it that way. What they plan to do in the future is to build kiosks that will then be placed in mall centers so that women can have a chance to actually touch and feel the products they might potentially be buying. However, to build one kiosk would cost around $25k, which they don’t exactly have the money for at the moment.

Daymond John brings up that, if they are asking for $50k in exchange for 5%, they are estimating the brand 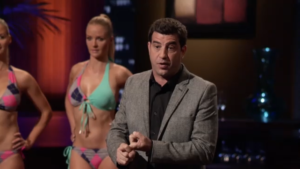 at $1 million. Scozzafava confirms this, but DiSilvestero says that no, they were willing to give up 10% of the business. This brings about some confusion with the Sharks because they had all written down that the asking price was for 5% and not 10%. Making this brief communication error definitely took away some of their professionalism, but it was quickly clarified that they wanted to give up 10%. Regardless of this sudden increase in equity, John claims that it’s a little ballsy to be estimating their business at a half a million dollars when they have yet to make any real groundbreaking sales.

Then Kevin O’Leary brings up that it might just be easier to license this idea to other big name companies so that they could just sit back and collect a check. Scozzafava says that yes, that is one way they could direct the business, but there are so many different possibilities. Herjavec, seemingly frustrated, tells them to pick just one direction to steer the business towards. To the Shark’s dismay, they said that they were there to hear suggestions and were looking for guidance. Mark Cuban shakes his head and tells them that here at the Shark Tank, they are looking for businesses with a plan, not businesses that need a path set for them.

A new flame seems to have been lit under the two business owners and they argue that this business could earn them so much money because it’s a multi-billion dollar industry. It is their claim that every woman who has tried the Mix Bikini has loved it, which can only mean that this brand is going to be the next hottest thing on the market. And the interesting thing about all that is, they already have around $500k to invest in the company. The Sharks don’t seem to know what to do with this information, because usually businesses come to them seeking capitol to get their businesses started. That doesn’t appear to be the case with these guys though. All they are looking for is the expertise in the marketing realm.

Scozzafava lists the different ways in which they could take Mix Bikini, but John argues that none of it is as easy as they are making it seem. He knows this because he built his very own clothing brand. Getting a brand’s name out there is no easy feat, so he decides to drop out. After that, Scozzafava gets heated with the other male Sharks in the tank while he tries to convince them that this is a product worth investing into and that it is going to be the next greatest thing. Herjavec manages to shut him down, which causes him to redirect his attention to Corocran who has been rather quite the entire episode.

It is her belief that taking this brand to a kiosk probably wouldn’t be such a good idea because there are so many different parts and pieces that it could get overwhelming. But she does believe that there is a chance that this business could be successful, which is why she decides to make them an offer. Corcoran agrees to give them the $50k, but she wants a 25% stake in exchange for it. Considering that none of the other sharks had shown any interest in Mix Bikini, they are quick to accept the deal before she has time to change her mind about it.

The deal with Barbara was eventually finalized. To celebrate, they rented out a nightclub for an evening and put on one of the biggest parties the city has ever seen. Barbara was also their guest of honour.

After a while, the champagne ran out. The bills also started rolling in and it was then that she realized she had lost her investment in the brand. For one thing, their website had crashed after their segment aired. To make matters worse, it took them an entire week to fix the issue; this led to an estimated loss of $200,000 in sales and Barbara was forced to cut her losses.

As a result, Adam and Frank bailed out on the company. Fortunately, Kelsey Duffy, one of their creative partners, managed to save the business by rebranding it as Versakini. She also began working with Amanda Perna, a former Project Runway designer, on the bikinis.

And for many years, the company did great. The prices might have been a little higher than what they were during their Mix Bikini Days but the general concept was the same and customers seemed to love it. In 2018 alone, they made more than $8 million in revenue.

However, it didn’t last. By early 2022, they no longer had any products for sale despite the website still being up. They also seem to have abandoned their social media pages; they haven’t been updated since January 2018.

As of today, their website is no longer online. The domain itself still works, but it’s no longer connected to a Shopify store.

According to Kelsey’s LinkedIn profile, the company officially shut down in 2018. Since then, she has worked several jobs. She was a Marketing Director at Aiden Image from February 2018 to March 2019 and later worked as a Director of Communications and Digital Engagement at Page Society from July 2019 to November 2019. And since 2020, she has been working as a Web and Design Consultant for The Rockefeller Foundation.

As for Frank and Adam, they had moved on to other things after leaving the company. The former created a new company called Scootaway, a scooter ride-share program that’s controlled via smartphone, while the latter started DiSO’S, an Italian Food Truck in the New York area that offers a variety of sandwiches. In fact, they had been featured on The Great Food Truck Race back in 2015. For those who are interested, you can check out their menu here.

Scootway, on the other hand, no longer seems to be in business as of 2022.