What Happened to Chad Ochocinco – NFL Comeback in 2018 Update 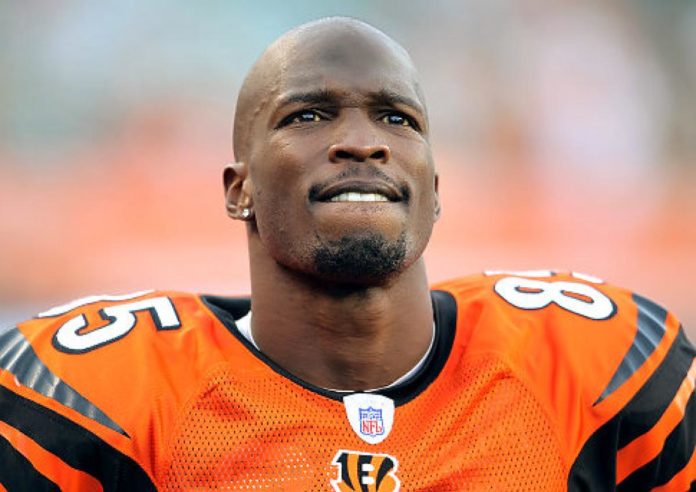 Chad Ochocinco was born in Miami, Florida. He went on to graduate from high school and eventually attend Langston University, but he did not participate in the football program there. In the year 2000, Chad Ochocinco would transfer out to Oregon State University after being recruited by the head coach at the time, Dennis Erickson. Chad Ochocinco’s first season playing at Oregon State University was an 11-1 season, and an eventual victory in the Fiesta Bowl against Notre Dame, a very reputable school in collegiate football. Chad also managed to grab a school record in his time at Oregon State, managing to return a 97-yard reception to grab the longest touchdown reception in a game played against Stanford.

Chad Ochocinco then graduated in 2000, and eventually made it to the NFL Draft where the Cincinatti Bengals drafted him, despite only having one year of experience under his belt. During Chad Ochocinco’s rookie year in 2002, he saw little playing time – he managed to catch 28 passes for a total of 329 yards and one singular touchdown. In 2003, he saw much more playing time and eventually managed to break the record for receiving yards, which was 1,355 his second year in the NFL. In his 3rd year with the Bengals, he managed to go on and receive 95 passes for 9 total touchdowns, and managed to run more than 1,274 yards
with the ball. He also was a decisive factor in the victory over the Cleveland Browns, where he managed to gain more than 117 receiving yards in one single game. Chad Ochocinco would go on to lead the AFC’s receiving yards score for four seasons, and would even make five Pro Bowl appearances.

Chad Ochocinco then announced in the 2005 season that he would be making a checklist, which would essentially list all the defenders that successfully managed to cover him. This list eventually led to very tangible results, and the list idea then became popular for teams to do. Chad Ochocinco’s original list was named, “Who Covered 85 in ‘05” and can still be published around the internet today – this is one of his biggest claims to fame.

Chad Ochocinco with the Bengals and Beyond 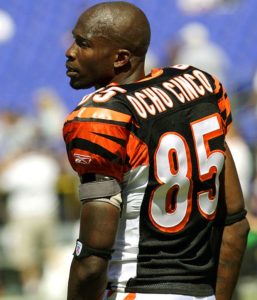 In 2006, Chad Ochocinco signed an agreement to extend his contract through the finality of the 2010-2011 season. However, in the 2006 season, Chad Ochocinco did not play often because of an earlier injury causing him some pain. During the first half of the season, Chad Ochocinco only managed to grab two touchdown passes and run 483 yards. This quickly flipped, however, when Chad Ochocinco ran for 260 receiving yards and 2 touchdowns in a game against the San Diego Chargers, which the Cincinatti Bengals would unfortunately lose. He then changed his entire season around; in a game against the New Orleans Saints, he ran for 190 yards with 3 touchdowns. This also gave him a record of 450 receiving yards in two consecutive games, a record that previously sat at 448 and remained unbroken since 1989. Chad would go on to be a beast during his 2006-2007 season, and has received credit as the first-ever Bengal to lead the NFL in receiving yards from passes. He would also go on to win the vote for best wide receiver, and fourth overall best player with nearly 1 million different votes.

Chad Ochocinco played like his usual self in the 2007-2008 season; he would break the threshold to have more than 8,000 receiving yards in his short 6-year NFL career. In his

2007 season, he ran for a total of 1,440 yards with an average of 15.5 yards gained every time he received the ball, 4 touchdowns, and had a notorious reputation for being able to quickly break away from the defending line. His 2007-2008 season would be his best season ever, and sadly, he would begin to deteriorate over time.

The 2008-2009 season did not start well for Chad Ochocinco, as he gained some self-awareness. He pointed out that he has been labeled as “selfish and a cancer,” and acknowledged that a lot of people were looking down upon him with disdain. Despite this, the coach vouched that Chad Ochocinco would be able to play in the 2008 season, but would not clarify if he was releasing Chad or not. Chad Ochocinco then privately threatened to voluntarily sit out of the 2008 season and not play at all. The head coach, Marvin Lewis, then announced that the Bengals were currently not interested in trading away Chad Ochocinco.

The bad blood between Chad Ochocinco and the Cincinnati Bengals was already let loose, and Chad Ochocinco then began to say that he wanted to move to a different team, citing a “new change of scenery.” He then began to miss practices and weight-lifting sessions before eventually confirming that he was going to remain with the Bengals. However, in a preseason game, Chad Ochocinco received an injury to his left shoulder – this was a partial tear to the labrum. Chad Ochocinco spoke with other players that had similar issues, and vowed to remain active in the game for the 2008-2009 season. He would play in only 13 games of 16, his first time ever missing a main season game since his first year with the Cincinnati Bengals. He gave an underwhelming performance, only receiving for 540 yards with an average of 10.2 yards every time he caught the ball, and only scored 4 touchdowns that year. 2008 was Chad Ochocinco’s third-worst year, with his final year in the NFL and his first year with the Cincinnati Bengals being the worst. In 2008, Chad Ochocinco legally changed his name from “Chad Johnson” to “Chad Ochocinco,” as well.

At the start of the 2009 season, two teams mentioned that they would be interested in scooping up Chad Ochocinco if he was a free agent due to being released for not attending practices and workout sessions. Chad Ochocinco also received a lot of heat from NFL officials for saying that he would tweet during live games, but this practice was quickly banned from the NFL. Chad Ochocinco began to become a more prominent figure in the community due to his poor attitude and performance in the 2008-2009 season; he would frequently show up to movie theaters and restaurants and announce these gatherings on Twitter, and would usually be the one to pick up the tab and ensure that everyone was included.

Chad Ochocinco bounced back in his 2009-2010 season, as he received for 1,047 yards with an average of 14.5 yards every time he caught the ball. He scored 9 different touchdowns and had numerous runs for more than 20 yards, and was a reliable source on getting the Cincinnati Bengals into their first downs. This would also be his second-to-last year with the Bengals, and third-to-last year in the NFL altogether. Chad Ochocinco would receive the Pro Bowl nomination and go on to perform in his 6th Pro Bowl, tying Lemar Parrish for the second highest Pro Bowl invitations in Cincinnati Bengals history.

The 2010-2011 season was Chad Ochocinco’s last season with the Cincinnati Bengals, which was an average season for him; he managed to receive for 831 yards with an average of 12.4 yards each time he caught the bowl. He only scored four touchdowns, but was responsible for 47 separate first downs. Overall, Chad Ochocinco ended his career with the Cincinnati Bengals on a high note, and would eventually make his way to the New England Patriots. The Patriots managed to trade away two draft picks in order to receive Chad Ochocinco, and signed him to a $6.35 million three-year contract.

The 2010-2011 season was Chad Ochocinco’s worst year in the NFL; he only caught 15 receptions for a total of 276 receiving yards, and every time he managed to catch the ball, he averaged 18.4 yards. He only managed one touchdown, and was only responsible for 13 different First Downs; stats-wise, Chad Ochocinco was performing at about 25% or 20% of his

overall capability. Chad Ochocinco only lasted one season with the Patriots before his release on June 7, 2012.

Chad Ochocinco would resurface in the professional sports world, although he would be signed by the Montreal Alouettes from the Canadian Football League. He only appeared in five season games and missed the two post-season games due to a family issue in Florida. After he did not attend training camp in spring of 2015, Chad Ochocinco was suspended and then released.

Chad Ochocinco has also appeared on his own iPhone game, named “Mad Chad.” This app mad it to the top of the charts for most downloaded apps. He also appeared on Dancing with the Stars, making it to the final four position. He guest-hosted WWE’s Monday Night Raw program, and hosted his own reality TV dating show on the VH1 channel. He has also appeared in the television shows Blue Mountain State, The League, and The Game.

Chad Ochocinco has five children and is currently not known to be dating or married to anyone. After attending the Cleveland Browns training camp, Ochocinco returned to his home state of Florida.