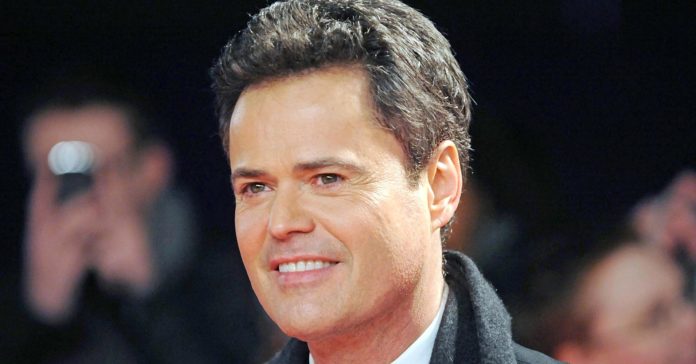 Donny Osmond is an American entertainer who first rose in popularity as part of the singing group, The Osmonds, with his brothers in the 1960’s. Raised in a household that regularly listened to music, he first began to sing as a young boy alongside his older siblings. After being met with much success performing as a vocalist for The Osmonds, he eventually became a teen idol in the early 70’s, beginning a solo music career on the side. Following recording deal with MGM, Osmond released his debut album entitled, The Donny Osmond Album at the age of thirteen in 1971. Quickly a success, the singer would continue to sing and perform for many decades; around the time of his first album release, he also covered many hit songs such as Puppy Love and Go Away Little Girl.

Over the years, Osmond has succeeded in making a name for himself as a music artist. In terms of his musical career, he has released over sixty studio albums and well over two dozen singles since first stepping into the studio as a young teenager. A well recognized American pop singer, Osmond has achieved three number one singles and has had many of his albums certified by the RIAA. In 2006, he was the recipient of a TV Land Award for “Favourite Singing Siblings” for his song Donny and Marie, which he had shared with her sister. Earlier in 2003, he also received a nomination for a DVD Exclusive Award for “Best Original Song” for a piece featured in the animated film, The Land Before Time IX: Journey to the Big Water.

Besides being an established figure in the music industry, Osmond is also an accomplished actor and television game host. He made his first appearance in the 1964 TV series, Bob Hope Presents the Chrysler Theatre, when he was seven. Since then, he has acted behind the camera on numerous occasions including The Wild Women of Chastity Gulch (1982), The Love Boat (1982), Diagnosis Murder (1999) and Friends (2004), amongst others. A multi-talented man, Osmond has also lent his voice to multiple animated series such as Johnny Bravo (2003) and Bob the Builder: Built to be Wild (2006). As a game show host, he hosted various game shows throughout the years including Pyramid (2002), The Great American Dream Vote (2007), and Identity (2007). In 2009, he also took part in the American dancing competition, Dancing with the Stars.

So what has the American entertainer been busy with for the last while? What new television series or music records have he been working on recently? What happened to Donny Osmond? Where is he now in 2018?

Donny Osmond’s Early Years as a Member of “The Osmonds” 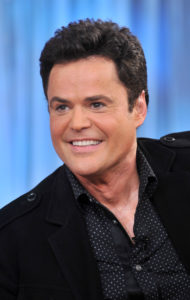 Born on December 9, 1957 in Ogden, Utah, Donald Clark Osmond (aka: Donny), is the son of George Virl and Olive May Osmond; he is the seventh oldest out of nine children. A natural performer, Osmond first began to sing with his older brothers when he was only a young boy; his brothers Jay, Wayne, Merill and Alan had performed together at the time as part of the singing group called “The Osmonds”; they often showcased their vocals at Mormon church services. Noticing their younger brother’s knack for music, they eventually added him into the group as their fifth member. Soon performing at other venues besides their home church in the area, the siblings was later invited to sing at a handful of Mormon churches in the western part of the country.

After singing various gigs such as that for Disneyland in the mid 60’s, the siblings (along with their sister Marie, who later joined the group) made a number of appearances on television showsーmainly that of Andy Williams and Jerry Lewis. Shifting their sounds to include a more barbershop style, The Osmonds quickly became regular performers on the show, in front of a nation-wide audience. Towards the end of the 1960’s and early 1970’s, the siblings caught a musical break when they scored a series of major hits including the song, One Bad Apple; at the time, Osmond also began to record solo tracks. With over 80 million record sales under their belt, the siblings became one of the most successful music group of the 70’s. 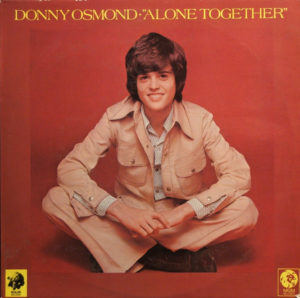 While still performing with his brothers, Osmond eventually landed a recording deal with MGM and released his first solo studio album, The Donny Osmond Album in June 1971. Produced by Rick Hall, it featured ten different songs, one of them being a cover of Wake Up Little Susie by the Everly Brothers. Generally considered to be a strong debut album (especially for a thirteen year old) upon its release, The Donny Osmond Album peaked at number thirteen on the US Albums Chart and fared even better in Canada, where it reached number two. The album later spawned one singleーSweet & Innocent, which eventually found its place at number seven on the Pop Charts in the United States.

Following in the mild success of his newly found solo music career, Osmond released his second studio album entitled, To You With Love, Donny in October 1971. Made available just a few months after his first record release, the album consisted once again of ten songs, including I Knew You When, Go Away Little Girl, A Little Bit Me A Little Bit You and multiple others. Although not a huge commercial hit, the album managed to peak at number twelve on the US Pop Charts and at number thirty one in Canada. To You With Love, Donny eventually produced the single, Go Away Little Girl, which would ultimately go on to reach the number one position on the Billboard Hot 100 Chart. As of January 1972, the album has been given Gold Certification by the RIAA for selling over 500,000 units.

The next year, the singer released his third full-length album Portrait of Donny in May 1972. Produced by Michael Lloyd and Alan Osmond (his older brother), it peaked at number six on the Top LP Chart and at number five on the Canadian Pop Charts; it was also Osmond’s first album to chart in the UK. Boasting a track list of eleven songs, Portrait of Donny included many eventual hits such as Puppy Love and Hey Girl, which would later go on to peak at the number three position as singles. Favourably received, the album as has sold over 500,000 units, making it the singer’s third album in a row to achieve Gold accreditation in the United States.

Carrying on with his budding music career as a teen in the 70’s, Osmond released his fourth album, Too Young in July 1972. Consisting of ten bubblegum pop tracks, the album was met with similar success compared to his preceding works, charting in at number eleven on the US Chart and at number twelve on the Canadian Chart. Too Young eventually led to the release of a handful of series, including Why and Too Young, which managed to climb up to number thirteen on the US Hot 100 Chart. A year after its release, the album was certified Gold by the RIAA.

In March 1973, the singer released his fifth studio album entitled, Alone Together; that same year, he also released, A Time For Us. Both would go on to chart in the US and Canadian Charts and achieve gold certification in the UK. Before the end of the 70’s, the singer released three more albumsーDonny (1974), Disco Train (1976) and  Donald Clark Osmond (1977). It wouldn’t be until the end of the next decade that Osmond would release his next full-length album. 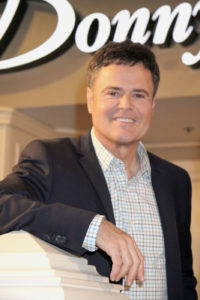 After a multi-year hiatus from recording, Osmond released his next album in April 1989, after re-inventing a new image for himself. His first record under the Capitol label, it contained eleven pop songs including Soldier of Love, Sacred Emotion, I’ll Be Good to You and In It For Love. Something which made the album unique was the fact that its second track, Soldier of Love was originally released as a piece by a “mysterious vocalist”; promoters had left the identity unrevealed at the time of its release to help its sales. Warmly received, the eponymous album peaked at number fifty four on the Billboard 200.

Not long after that, his eleventh solo album entitled, Eyes Don’t Lie was released in October 1990. With his comeback to music generally welcomed by fans, the album included ten tracks including My Life Is a Fire, Love Will Survive, Private Affair, Make It Last Forever, amongst others. Given a three star rating on Allmusic, Eyes Don’t Lie eventually peaked at number 177 on the US Billboard 200 Chart shortly after its release. It eventually spawned three singlesーMy Love is a Fire, Love Will Survive and Sure Lookin’, two of which would go on to rank int he Billboard Hot 100.

Once again taking a break from recording to focus on his career in film and television, it wasn’t until 1997 that his next album, Four was released. Since then, Osmond has released five more albums: This is the Moment, Somewhere in Time, What I Meant to Say, Love Songs of the 70’s, and most recently in 2016- The Soundtrack of My Life. 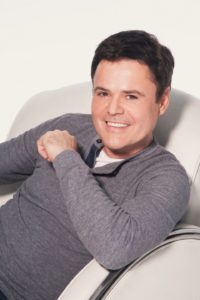 In July of this year, Osmond gave a long-time, dedicated fan a big surprise when he gave her a visit in her home. According to sources, the women whose name was Leslie Fiet, has been “obsessed” with the singer ever since she was a little girl. However it wasn’t until FOX13 made a visit to her home while covering a news story about a missing toddler, that her shrine for Donny Osmond was noticed. Wanting to help Fiet meet her hero, FOX13 asked the singer if he’d be interested in doing a little surprise missionーto which of course he said yes to!

In terms of musicーlooks like the American pop star is preparing for a tour, which is set to happen in 2017! Celebrating 50 years in the entertainment industry, it was announced in April 2016 that Osmond will be embarking on a UK tomorrow in the upcoming year. The 2017 tour is currently set to kick off at the Manchester Arena in January, prior to making its ways to other regions including London, Nottingham, Liverpool, Glasgow, Cardiff and Brighton. In total, there will be ten shows from January until the start of February. If you have an itch to see Osmond sing up onstage, here’s your chanceーtickets are available for sale now! For more information, please visit the singer’s official website.

Want to stay updated with the American pop celebrity? Why not give him a follow on social mediaーyou can find him tweeting away on Twitter under his handle (@donnyosmond) or on Instagram (@donnyosmond). If you’re a fan, make sure to also check out his official Facebook page and website!