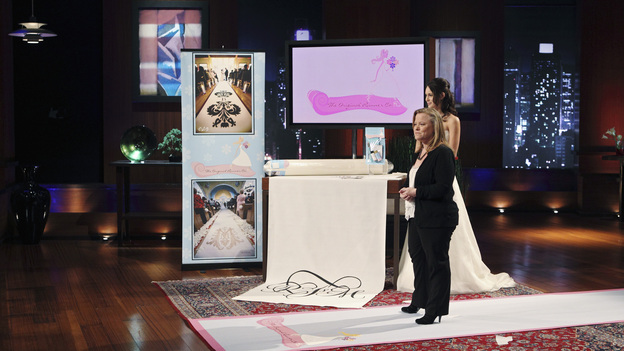 Stepping into the Shark Tank is Julie Goldman. Julie is both the CEO and founder of the Original Runner Company. Julie is here to present her business and seek a $250,000 investment, in exchange for 15% stake in her company. Julie begins by saying that she is proud to say that she has perfected life’s grand entrances. She does this because she has created the world’s first non-slip aisle runners that are specifically for weddings.

When Julie was planning her own wedding, she needed an aisle runner to cover the hideous carpeting in the ceremony venue. It would be easy, she thought, since she could just go down to the store and pick up a runner. However, it was like shopping at a supermarket since her choices were either paper or plastic, but neither of them were great options since the women are wearing stiletto heels. This causes the runner to rip, tear, and puncture, which can really ruin the wedding photos. There was nothing else on the market that was safe and beautiful, so Julie made her own and thus, the Original Runner Company was born.

Julie’s loyal fanbase and celebrity clientele has resulted in her aisle runners being sold worldwide through the website alone. But this can change today as Julie exhibits the “walk-safe aisle runner.” This aisle runner is a 50 foot, non-slip is made of a fabric that does not easily tear or puncture. This aisle runner is also mass-produced and sold in retail stores for the very first time, and through thousands of online wedding websites. These are plain white wedding runners, which are the most popular wedding runners in the world. In addition, Julie is also introducing the home monogramming kit, which allows for a do-it-yourself type bride to customize her runner by herself.

Julie continues on, saying that the do-it-yourself kit is a fraction of the price that Julie charges in her studio. With the combined package, this makes customized aisle runners affordable for any type of wedding. The two new retail-based options will make Julie’s brand far more affordable and accessible to the 2 million brides that are married in the United States alone each year. With an investment in the Original Runner Company, the Sharks can make millions. 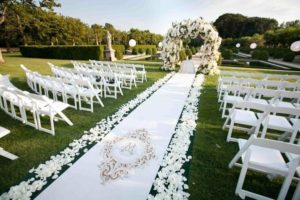 Robert is the first Shark to speak up; he asks about the sales for the last year. Despite there being a downed economy (in the filming of this episode), they sold 550,000 units alone. Prior to the recession, they had sold 850,000 units per year, but this year will be about 650,000 when the year has ended. Kevin butts in and says that Julie is a great indicator that the economy is bouncing back, but Julie says that she rebuilt her business by moving out of New York City (saving her 80% on rent), reformatted how she gave herself salary, and refocused on how she wanted to advertise her product.
All of the Sharks are silent for a moment, having finally met their match. Daymond asks how much a runner costs to make, and Julie says that while each runner costs $25 to make, she will retail each one for $37.50. This yields a 52% profit, but Daymond says that is not the correct margin. Julie explains that the proper profit margin is 33%, which is not enough according to Kevin and Daymond. Julie explains that this type of margin is more common towards arts and crafts stores, and in fact, the margin can be far lower.

Still, Daymond explains that has nothing to do with the investor’s side of the business; they at least have to make a 60% margin on that to pay off the investors. If Julie and a Shark invested more, they could actually drive the price to produce a single unit down significantly. Daymond then asks if there is something proprietary about the runner that Julie wants to make, and Julie explains that her runner is the only non-paper and non-plastic runner in the world. If you wanted a paper or plastic aisle runner with an imprint on it, it would cost far more than her price.

Daymond then asks if the competitors to the Original Runner Company could offer a price discount for the same services, but Julie explains that she does not have any competition that do this; nobody else is making non-slip runners. Daymond then asks if the competition see Julie doing something accessible, then surely they will end up doing the same thing, so where are the patents? Julie explains that you cannot patent fabrics, just like Daymond probably learned when he made his millions through the founding of his company Fubu.

Still, Daymond asks if somebody else can make a non-slip runner after they see that Julie is doing well. Julie admits that they could, but Julie is already doing well; Daymond, regardless, has his answer. Robert then asks how the business is worth $1.8 million today, but Julie says the company is worth more. A valuation can be determined in lots of different ways, but if you base it on current revenue alone, the Original Runner Company is making $650,000 and using a 3:5 ratio (of cashflow), this nets a value of $1.8 million. Just like Daymond earlier, Robert is defeated and has no rebuttals.

Kevin then asks how much the runner that Julie is standing on would cost him for his wedding. Julie explains that she is standing on a higher-end runner, which is 75 feet long and hand-painted, hand-crystalled, and hand-glittered. This exact unit would cost $750. After all of the cost, Kevin asks, what is the profit margin? Julie explains that it is around 200%. Since the runner sells for $750, Julie only has to invest about $250 in order to get a sellable unit. Robert is confused and asks why there is such a big price disparity between the customized and non-customized unit. 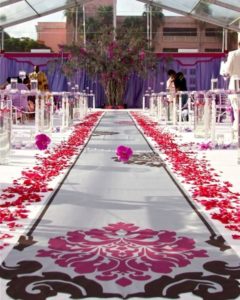 Julie explains that her current clients are spending $50,000 or more on a wedding, but the average wedding is $27,000. The people around the $27,000 budget are not buying customized runners since they cannot work it into the budget. Kevin then steps up and says that the best thing about weddings is that nobody cares about money, which is the perfect time to hit them. Kevin does not want the cheap runner, but rather the $750 runner when people are not looking.

Kevin explains that Julie is making tons of money in the high-end wedding and doing well for herself, but she wants to go to “the toilet bowl wedding.” Mark clarifies this and explains that Julie dominates a category and sometimes it is better to dominate a niche. Moving to retail would work change the entire setup of the business, and with this, create a whole new set of risks.

Julie explains that most churches and synagogues no longer allow aisle runners because they only have seen paper and plastic ones. Clients request swatches and the Original Runner Company receives permission to use their runners in the churches. So, Kevin and Mark ask, why the move down to retail? Julie disagrees with them, thinking that her product will yield more profit with more accessibility. The brides are buying the runners, not the churches. Still, Mark explains that Julie is taking on incremental risks with her investment in bringing the product to retail.

The Sharks then fight amongst themselves until Barb breaks up the fight. Barb says blatantly she does not think that Julie needs an investment since she got to where she is now on her own. She does not agree with the strategy, like the others, so this is why she is the first Shark out of the deal.

Mark explains that Julie is missing the obvious with having numerous retailers taking responsibilities for the products and selling them. The truth is, retailers cannot sell the runners as well as Julie can, so Mark is out of the deal as well. Robert speaks up next, saying that he would rather have a profitable $2 million business than risk everything to maybe get to $4 or $5 million through retail. He does not see the validity of scaling the business larger, so Robert is also out.

Daymond simply exits the deal without explaining why, but it is fairly obvious why he has exited. Kevin is the last Shark remaining, and he starts by getting down to business; thank goodness the two of them met since Julie needs Kevin badly, but she does not know it. Kevin offers an investment of $250,000 in exchange for 51% of her business, which gives Kevin control over the entire operation.

The purpose of controlling the business would be so that Kevin can keep Julie on a leash to make him money. This would allow Julie to make a lot of money and become rich, while also receiving Kevin’s expertise. Julie explains that she has worked in the business for 7 years and is known as “the aisle guru.” Still, Kevin knows how to make money.

In the end, Julie refuses Kevin’s draconian offer. Kevin still feels that Julie needs him badly, but Julie has found enough success in her own right. Without an investment in the Original Runner Company, Julie leaves the Shark Tank. Mark says that Julie would have eaten up Kevin and spit him out twice; Julie performed exceedingly well in the Shark Tank compared to some other entrepreneurs.

Original Runner Company Now in 2018- The After Shark Tank Update

Julie did not even need to attend the Shark Tank, but the infamous Shark Tank effect eventually found her and helped grow her company. Now, the Original Runner Company has a revamped website from earlier this year (available on the wayback machine website) which offers both information and an online product store. Julie is still offering customized runners, which are fit and specifically made to the aisle of the church or venue that the wedding is being held in, and now also offer a variety of solid color fabrics.

However, these fabrics are rather expensive and start at the price of $165 for 25 feet, running all the way up to $285 for 150 feet – evidently, the bulk discount adds up quickly. In addition to this, I was not able to find any information about the Original Runner Company monogramming kit that Julie introduced on Shark Tank and planned to use as a vehicle to enter retail; this is ultimately a good thing, because Julie is focusing on high-margin, low-effort items that are evidently in incredibly high demand. Since the economy has bounced back (5-6 years after the filming of this episode), I imagine the Original Runner Company is doing incredibly well.