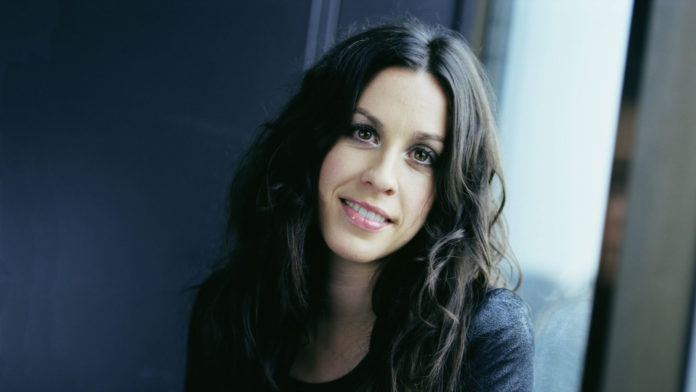 Canadian rock singer Alanis Morissette first rose to fame during the early 90’s with the release of her hit album, Jagged Little Pill. A piano player since the age of six, music was always a big part of Morissette’s life growing up. A self described overachiever, she later went on to write her first song when she was nine years old. Eventually branching out into acting, Morissette made her television debut in the Nickelodeon Kid’s series, You Can’t Do That on Television in 1986 at the age of twelve. Soon after the end of the show, Morissette used her earnings from the series to record and produce her first single, Fate Stay with Me which was later released in 1987. Although the song was no chart-topper, it did attract the attention of MCA Canada, who went on to offer the young artist a recording contract. At the age of seventeen, the brunette released her debut album, Alanis in 1991.

Since she first step foot inside a recording studio back in her debut days, the Canadian artist has released eight full-length albums, thirty-two singles and twenty six music videos. While she has produced many RIAA certified albums throughout her career, her most successful record remains to be her third studio album, Jagged Little Pill which has achieved Diamond Status as of 1998. In 1996, the album also won Morissette her first Grammy Award for the category of “Album of the Year.” From there, her collection of awards have only increased; so far, she has received two American Music Awards, seven Grammy Awards, twelve Juno Awards and three MTV Video Music Awards, amongst various others. Dubbed the “Queen of alt-rock angst” by Rolling Stone Magazine, the brunette was also inducted into the Canadian Walk of Fame in 2005. To date, she has sold well over 60,000,000 records across the globe.

However singing’s not her only talentーMorissette also occasionally works as an actress. After her brief stint in You Can’t Do That on Television as a young teen, she appeared in front of the cameras once again for the adventure film, Dogma (1999); the artist later made a guest appearance in the romance comedy, Sex and the City (2000) the following year. More recently in the 2010’s, she portrayed the role of Dr. Audra Kitson in the dark comedy series, Weeds (2009), alongside actors Mary Louise Parker, Elizabeth Perkins, and Justin Kirk. Aside from acting, Morissette also took on the role of being an adviser on the second season of the singing competition, The Voice in 2012.

So what has the seven-time Grammy Award winning artist been up to these years? Has she recorded any new singles or albums recently? What happened to Alanis Morissette? Where is she now in 2018? 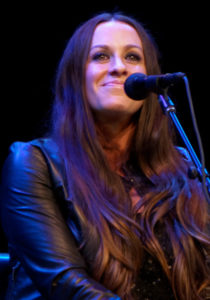 Born on June 1, 1974, in Ottawa, Ontario, Alanis Nadine Morissette is the daughter of Alan Richard and Georgia Mary Ann Morissette, both of whom worked in education; she has two older twin brothers named Chad and Wade. Due to the fact that her parents worked in a military school, Morissette and her family often moved around during her early childhood. Despite being a Canadian citizen by birth, she spent three years in Germany before moving back to her Native Canada in the early 80’s. Growing up, she loved being around music and later began to take piano lessons at the age of six; the following year, she also took up dance. Raised as a Catholic, Morissette went to a private school and was a straight A’s student who excelled in all of her classes.

Her musical interests soon developing into a passion, she began to write her own songs when she was nine years old. When she was twelve, Morissette was noticed for her talents and offered a role on the Nickelodeon Kid’s series, You Can’t Do That on Televisionーit was her first time being on national television. Having received a sum of money from her time on the show, Morissette, who had by then decided that she wanted to pursue a career in music, recorded and produced a single entitled, Fate Stay With Me under her own independent label in 1987. Although it was no monster hit (which really wasn’t that big of a surprise given that it was written by a thirteen year old), it soon caught the attention of MCA Canada; recognizing the young teen’s talent, they eventually signed her on as a recording artist in 1990. 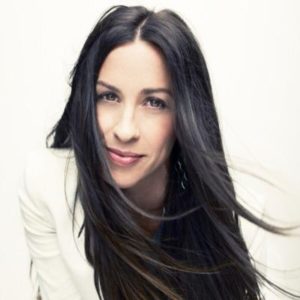 In the spring of April 1991, Morissette released her debut album, Alanis under MCA Records Canada. Produced by Leslie Howe, the album was released to mixed reviews from critics; some even compared her vocals to that of other teen singers at the time such as Tiffany and Debbie Gibson. Shortly after its release, Alanis peaked at number twenty-eight on Canadian Albums Chart. Featuring a blend of pop and dance pop tracks, the album consisted of ten songs, all of which were either written or co-written by the artist herself. Although Alanis was not an overnight hit, it did go on to spawn four singles, Too Hot, Walk Away, Feel Your Love and Plastic. Since it was first released in stores, the album has sold over 100,000 units within Canada, earning it Platinum certification from Music Canada.

After a second album release in 1992, Morissette released her breakthrough album, Jagged Little Pill in June 1995. Her first record with the Maverick label, the album was different from her preceding works as it contained a blend of alternative and pop rock sounds compared to dance pop; it also featured instrumentals from drum machines, guitars, harmonica and keyboards. Universally acclaimed, the album topped numerous charts around the world including the US Billboard 200, the Canadian Albums Chart, the UK Albums Chart, amongst many others. Ranked by Rolling Stone to be “One of the 500 Greatest Albums of All Time”, Jagged Little Pill was met with overwhelm positive reviews from critics and currently holds a four and a half star rating from both Allmusic and Rolling Stone. Nothing short of a success, it earned the artist countless accolades including three Grammy Awards and six Juno Awards. The big break that Morissette was waiting for, Jagged Little Pill later spawned six singlesーall of which were composed and written by the singer herself. The artist’s best-performing album to date, it has since been certified 2x Diamond in Canada and 16x Platinum (Diamond) in the United States; over 33,000,000 copies have been sold worldwide.

Six years later, Morissette released her next big hit, Supposed Former Infatuation Junkie in November 1998. Another chart-topper for the Canadian singer, it debuted at the top of the US Billboard 200 Chart and quickly made over 469,000 sales during the initial week; it also peaked at number one in her native Canada, as well as in four other countries including Switzerland, Norway, New Zealand and Germany. Having sold over two million copies globally in the first week alone, Supposed Former Infatuation Junkie was another favourite amongst critics; it was given a perfect four out of four star rating from the Los Angeles Time and a near perfect score of four and a half stars from Rolling Stone. Garnering Morissette another Juno Award for “Album of the Year”, the eventual singles Thank U and So Pure also later received a Grammy Award nomination each for “Best Female Pop Vocal Performance.” To promote her new album at the time, the brunette also embarked on a summer tour which kicked off in North America and continued to Europe and areas in Asia. Her second multi-platinum album, it has sold over three million copies in the US and has also received 4x Platinum status in Canada. 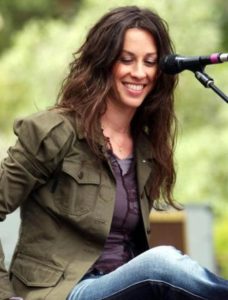 Following the release of her fourth studio album, it wasn’t until two years after the new millennium that she released her next album, Under Rug Swept. Made available in stores in February 2002, the album was also the first that Morissette had produced and written wholly on her own. Although its sales did not match that of her precious efforts, the album was still favourably praised; for instance, Q Magazine had described the album to contain “some of the most inviting music of her career.” Featuring eleven pop and alternative rock tracks, Under Rug Swept debuted at the top of the charts in twelve different countries, including both Canada and the United States. Nominated for a Juno Award for “Pop Album of the Year”, the album went on to spawn two singlesーHands Clean and Precious Illusions, the former of which also reached number one in Canada.

Morissette released her sixth full-length album, So-Called Chaos in May 2004. Reaching number two on the Canadian Charts, it eventually sold over 475,000 copies in the USーjust missing Gold status certification from the RIAA. Over the next few years, the singer released two more studio albums, Flavors of Entanglement and Havoc and Bright Lights; although they were both successful in the Canadian Charts, having reached number three and number one respectively, their sale amounts would not rival that of her earlier albums from the late 1990’s. 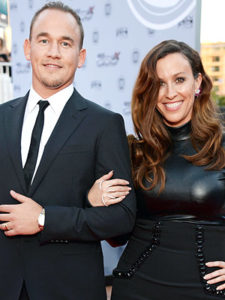 In early July of this year, Morissette and husband Mario Treadway welcomed their second bundle of joy into the world, a daughter named Onyx Solace. The couple who tied the knot back in a private ceremony in Los Angeles few years ago, also have a son who was born in 2010. Regarding their new addition to the family, the pair can’t seem to be any more excitedーshortly after giving birth, the singer uploaded a photo of the newborn onto her social media account, which has since gained tens of thousands of likes. If the way they treated their son was any indication, it looks like little Onyx will be getting a lot of loving attention from her parents!

Just a month after giving birth, Morissette made the headlines again after putting out her two-bedroom downtown apartment home up for sale in the real estate market. Considering how she has just welcomed another member into her family with husband Mario, it’s quite possible that the condo, which she’d owned since the 90’s, is simply not big enough for her two children. The apartment, which boasts a beautiful view of the Ottawa River is also conveniently located within walking distance to the National Art Gallery and Parliament Hill. The current asking price is $989,000ーquite the price tag considering how an average condominium in Ottawa goes for around $265,000!

If you’re a fan of the rock star, why not follow Alanis Morissette on social media? You can find the singing brunette on Twitter (@Alanis) as well as on Instagram (@alanis). Don’t forget to also drop by her official Facebook page and website for some of her latest news!