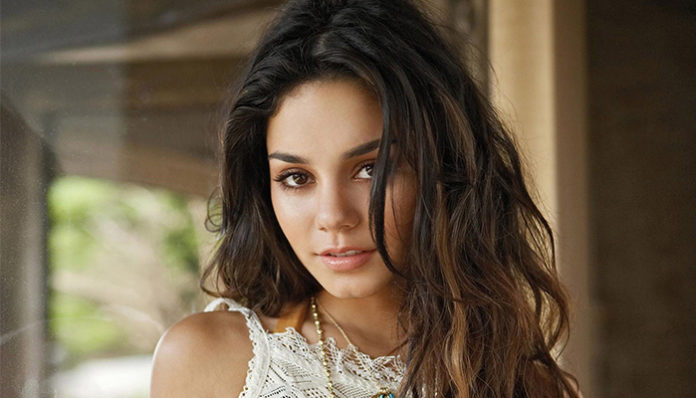 Vanessa Hudgens is an American actress who is best known for playing Gabriella Montez in the Disney original film series, High School Musical. Having developed a deep fondness for both acting and music in her early childhood, Hudgens regularly showed off her knack for performing in the house even before she got involved with musical theatre at the age of eight. Noticed for her talents, it wasn’t long until the young girl landed a number of commercial gigs on television. After having gone in front of the camera a handful of times, Hudgens eventually made her TV debut playing a small role in the 2002 comedy drama, Still Standing. Slowly engraving an identity for herself in the industry, she continued to take on multiple small roles in various shows over the next few years including Robbery Homocide Division (2002), Thirteen (2003), The Brothers Garcia (2003) and Thunderbirds (2004).

However it wasn’t until she was cast as Gabriella Montez in the TV movie, High School Musical in 2006 that her talents as an actress were brought to mainstream attention. One of the most successful films that ever graced the Disney Channel, it played a significant part in the launching of the young brunette’s acting career; to this date, it remains to be Hudgens’ most popular character portrayal. Despite being only in her twenties, Hudgens has achieved many feats and has also accumulated several awards over the years. In 2006, the actress was presented with a Teen Choice Award for her performance in High School Musical; since then, she has also received a Kid’s Choice Award for “Favourite Movie Actress”, a ShoWest Award for “Female Star of Tomorrow” as well as a Young Hollywood Award for “Best Trendsetter.”

Although most people know her as Gabriella from High School Musical, the truth isーHudgens is also a professional singer (which shouldn’t be too surprising considering her greatest role on television was in that of a musical). While it’s true that she’s a full-time actress who spends more time acting compared to recording music, she has released two full-length albums, four singles and four music videos. Her debut album entitled, V was released in 2006, the same year as the release of High School Musical; she later followed up her initial effort with a second studio album, Identified in 2008. To date, V remains to be her most successful album, having sold over 570,000 copies in the US alone.

So what has the actress of High School Musical fame been up to since then? What has she been working on these past few years? What happened to Vanessa Hudgens? Where is she now in 2018?

Vanessa Hudgens’ Childhood and Early Career in the Entertainment Industry 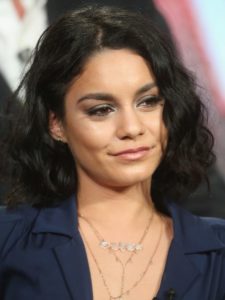 Born on December 14, 1988, in Salinas, California, Vanessa Anne Hudgens is the daughter of Gregory and Gina Hudgens, a firefighter and an office worker respectively; she is the oldest out of two siblings, her younger sister Stella also works in the show business as an actress. Raised as a Roman Catholic in the city of San Diego, Hudgens always had a thing for the arts and performing in general; she loved to act and listen to music in her free time. Naturally talented, she eventually took part in her first professional musical theatre production at the age of eight. As a young teen, she was a student at Orange County High School of the Arts for seventh grade, after which she opted to be home schooled.

Not long after that, Hudgens moved to Los Angeles with her family to pursue further opportunitiesーwhich given her talents, was not difficult for the young brunette; she soon landed a number of commercial gigs on television. Eventually shifting her way deeper into the show business, the teen made her acting debut  in the 2002 American sitcom, Still Standing. From there, Hudgens went on to appear in a multitude of small roles including those in the TV series Robbery Homicide Division (2002), The Brothers Garcia (2003), Quintuplets (2005) and Drake & Josh (2006). Around that same time, the brunette also appeared on the big screen for the first time, playing a supporting role in the autobiographical film, Thirteen (2003); the following year, she also portrayed a small part in the science fiction movie, Thunderbirds (2004). 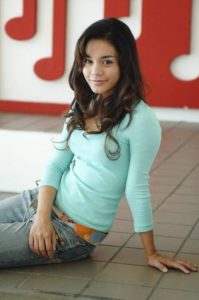 In 2006, Hudgens received a breakthrough in her career when she was cast as the leading female in the musical film, High School Musical. A Disney Channel Original Movie, the teen romance comedy revolve around protagonists Gabriella and Troy, who despite belonging to different cliques at their high school, eventually fall for each other after discovering their mutual love for singing and music. Originally released as a TV film in January 2006 on the Disney Channel, it was a huge success having attracted close to 8 million viewers to the television screens for its premiere broadcast. A hit amongst young viewers, High School Musical soon became the second most watched TV show on the Disney Network.

Being a musical, its soundtrack was also a chart-topper, having achieved 4x Platinum status after selling well over five million copies in the US. While Hudgens took on the part of Gabriella, a shy transfer student who’s exceptionally talented in science and mathematics, actor Zac Efron played the role of Troy Bolton, the captain of the basketball team. High School Musical won countless awards upon its release, including two Primetime Emmy Awards for “Outstanding Choreography” and “Outstanding Children’s Program” amongst others. For her role as Gabriella, Hudgens also received two Teen Choice Awards that year.

Following the success of the TV film, a second instalment entitled High School Musical 2 was released in the summer of 2007. Similar to the first, it was another major hit, having garnered over 17 million audience members for its premiere. The best-performing Disney Channel Movie of all time, it saw the return of the original cast with Hudgens reprising her role once again as Gabriella Montez. Set after the school year at the beginning of summer vacation, High School Musical 2 follows protagonist Troy Bolton (played by Zac Efron) as he tries to get a job while making sure he and Gabriella will be able to stay with each other during the summer months.

Even more successful than its predecessor, its soundtrack entered at number one on the US Billboard 200 Chart upon its release and sold a staggering 615,000 units during the first week of release. The best-selling album of its year, it has since sold over six million copies across the globe; not to mention it was also the recipient of an American Music Award for “Favourite Soundtrack Album” in 2007. For her performance in the single, You Are The Music In Me, Hudgens also received a CMA Wild and Young Award which she stared with co-star Zac Efron.

The third instalment of the trilogy, High School Musical 3: Senior Year was eventually released the following year in October 2008. The only film in the franchise to ever be released in theatres, it featured the return of the series’ six primary characters, including Gabriella Montez. As implied by its title, the spin-off revolved around the group of friends as they’re faced with the difficult prospect of parting ways after graduation; as a means of expressing themselves, they later stage an elaborate school musical with the rest of their classmates. Although it was met with mixed reviews upon its release, it did perform relatively better than the 2006 original, having grossed close to $50 million during its opening weekend. Opening at number one at the box office, it has since grossed over $250 million worldwideーa figure that was even higher than Disney’s expectations. For her role, Hudgens received a Nickelodeon Kids’ Choice Award for “Favourite Actress” as well as a nomination for a MTV Movie Award and a Teen Choice Award.

For the rest of the 2000’s, Hudgens continued to make occasional appearances on television; she guest starred in an episode of Robot Chicken in 2009 and eventually went on to star in the comedy musical film, Bandslam later that same year. During the 2010’s, the brunette was relatively more active on the big screen than the small screen, having appeared in half a dozen feature films.

In the fall of 2006, Hudgens released her debut studio album, V after embarking on a solo music career. A collaboration effort with a team of music producers including Brian Reeves, Matthew Gerrad and Kent Larsson, amongst others, it featured twelve dance pop-oriented songs and debuted at number twenty-four on the Billboard 200 shortly after its release, selling close to 34,000 units within the initial week. A commercial success, V has since sold over 500,000 copies in the US alone, earning it Gold certification form the RIAA. To promote the album, Hudgens also opened for The Cheetah Girls’ The Party’s Just Begun Tour from October to November 2006.

The artist’s initial music effort was soon followed by a second album entitled, Identified. Met with favourable reviews from critics upon its release, it made its way to number twenty-three on the US Billboard 200 Chart; it also charted in several other countries in the world. Identified spawned one single, Sneakernight, which peaked at number eighty-eight on the Billboard Hot 100 Chart. 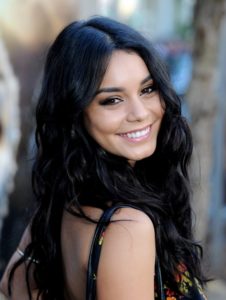 This spring, it was announced that the actress will be playing the lead role in an upcoming sitcom called Powerless. Based loosely on the characters from DC comics, the workplace comedy will revolve around one of the “worst insurance companies in America”, the twist being that it takes place in the DC Universe; in other words, it will follow the life of a normal individual in a world that is filled with villains and superheroes. Originally green lighted in the summer of 2015, the series was ordered in May 2016. In it, Hudgens will be playing the part of Emily Locke, an employee at an insurance agency who loves her job. Other members of the cast include Danny Pudi, Alan Tudyk, Christina Kirk, and Ron Funches. Curently still in the filming stages, it’s probably fair to assume that the series won’t be released until sometime in 2017.

In other news, Hudgens was recently hit with a $1000 fine after allegedly carving a heart shape into a red rock wall in Sedona during his Valentine’s Day trip with longtime boyfriend, Austin Butler. A photo of said craving was initially posted onto her Instagram, however it has since been removed. Unfortunately for the star, the photo uploaded onto her social media account ultimately led to her being caught in the act.

If you’re a fan who’s looking to stay up to date with the celebrity of High School Musical fame, why not follow her online presence on social media? You can find Vanessa Hudgens on Twitter (@VanessaHudgens) as well as on Instagram (@Vanessahudgens). Don’t forget to also drop by her official Tumblr and Facebook pages for some of her latest news!