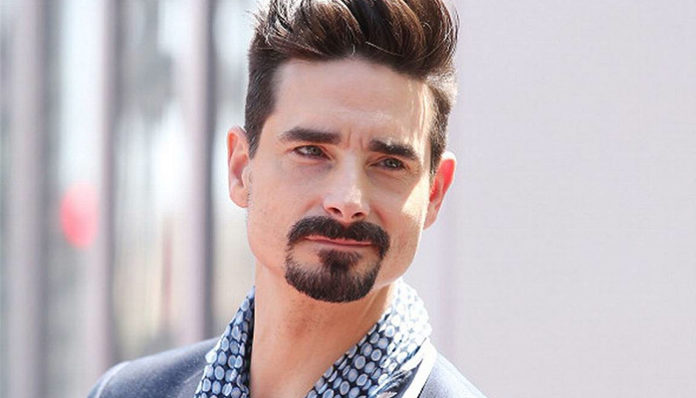 Kevin Richardson is an American singer who is best known as one of the members of the popular Backstreet Boys. A natural performer, he first sang in front of an audience as a part of the local church choir as a young boy. Later branching out into acting, he was involved in numerous school plays during his teen years including a production of Bye, Bye Birdie. After graduating, he soon found himself working as a cast member in Florida’s Walt Disney World, playing a wide variety of characters from Aladdin to one of the Teenage Mutant Turtles. Eventually in 1993, Richardson left his Disney costume days behind to join a new boy band called the Backstreet Boys. Due to the fact that the group was still in need of one more member after his addition, he then invited his cousin Brian Littrell to audition for the part. With the ensemble complete, the Backstreet Boys officially came to be later that year.

Performing at a number of different venues including Orlando’s own Seaworld, they worked hard to build a fan base during their initial years while also trying to secure a recording deal at the same time. Although they fell short of a contract with Mercury Records, the quintet eventually caught the attention of Jeff Fenster, a senior A&R at JIVE Records at a performance; impressed by their onstage talents, he soon offered them a recording contract with the company. Following a few single releases, Richardson and the rest of his bandmates released their debut album, Backstreet Boys in the spring of 1996. A huge commercial hit, their popularity as a group soon exploded as they gained international fame. Garnering them a Grammy Award for the category of “Best New Artist”, the album also earned them several other accolades including a Billboard Music Award for “Group Album of the Year” and a Bravo Otto Awards for “Gold Pop Group.”

Shortly after leaving the group in 2006, Richardson began pursuing other budding interests such as acting. He made his on-screen debut in the Christian television movie, Love Takes Wing alongside Sarah Jones and Jordan Bridges in the spring of 2009. From there, he went on to star in a musical film called The Bloody Indulgent in 2010 which revolved around a theme of vampires; that same year, Richardson also appeared in the drama, The Casserole Club alongside Michael Maize, Garrett Swann and Daniela Sea.  For his performance in the movie, he was given an Independent Vision Award for “Best Actor” in 2011.

So what has the man of Backstreet Boys fame been up to lately? What has he been working on as of late? What happened to Kevin Richardson? Where is he now in 2018?

Kevin Richardson’s Childhood and Musical Beginnings with the Backstreet Boys 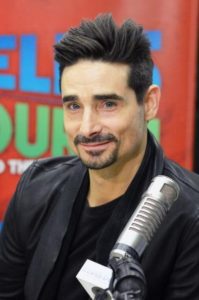 Born on October 3, 1971 in Lexinton, Kentucky, Kevin Scott Richardson is the son of Jerald Wayne Richardson, Sr. and Ann Littrell. The youngest of three siblings, he grew up with his brothers in a farm and spent much of his childhood playing sports. Despite having been an avid athlete however, he also developed a strong fondness for performing early on; Richardson began singing in the church choir at the age of six and eventually grew to love drama and acting as a teen. A student at Estill County High School, not only was he the captain of the football team, but he was also an active member of the school choir and drama club. During his time there, he took part in several school productions including that of Bye, Bye Birdie.

After graduating from high school, Richardson followed his love for acting and soon found himself working as a costumed cast member in Walt Disney World; over the years, he played many characters including that of Aladdin and a Teenage Ninja Mutant Turtle. For extra income, he also performed theatre at night. At the age of twenty-two, Richardson left his job at Disney after being invited to join an up-and-coming boy band called the Backstreet Boys. In need of an additional member, he later invited his cousin Brian Littrell to audition for the group. Establishing themselves as a quintet, they started to perform various gigs in restaurants, charity galas and even shopping malls in and around the Florida area. Attempting to build up a fan base, they began touring schools in the United States in the early 90’s while trying to secure a record deal. Although they were close to landing one with Mercury Records at one point, it eventually fell through. It wasn’t until February 1994, that they were offered a recording contract with JIVE Records after having captured the attention of Jeff Fenster, a senior VP A&R, at one of their school concerts.

Kevin Richardson’s Career as a Member of the Backstreet Boys 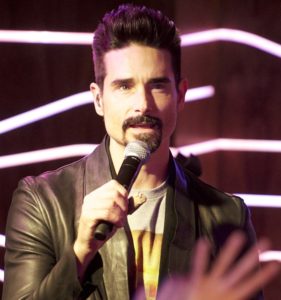 After getting themselves sorted, they flew down to Sweden in the summer of 1995 to record a few songs with artists Denniz PoP and Max Martin, including We’ve Got It Goin’ On, which became their first professional single. Although it was a minor success, it marked their first step into the music scene as an established group. Upon promoting their music and touring in Europe, they sat down to work on their eponymous debt album, Backstreet Boys which eventually became available in April 1996. Considered to be one of the biggest debut albums ever to have hit the scene, it topped the charts in over half a dozen counties including that of Austria, Canada, Hungary, Germany and Taiwan. Having achieved more than ten million record sales across the world, Backstreet Boys contains many of the group’s signature songs including I’ll Never Break Your Heart, Get Down (You’re the One for Me), Anywhere for You and Quit Playing Games (with My Heart).

In support of their debut effort, Richardson and the band also embarked on their first major tour coined the, We Wanna Be with You Tour. A highly anticipated event for thousands of new fans, it kicked off in December 1995 and brought the boys onstage in dozens of different cities within Germany, Switzerland, and Austria. For their set list, the Backstreet Boys performed several signature titles from their debut album including that of We’ve Got it Goin’ On, End of the Road, If I Ever Fall in Love, Let’s Have a Party, amongst others. The concert shows went on for a total of forty-one nights and eventually ended in August 1996.

Having established themselves as worthy newcomers in the pop world, they released their second studio album, Backstreet’s Back in August 1997. A strong follow-up to their first self-titled effort, it gave rise to three of the band’s most recognized and successful singles including As Long as You Love Me, All I Have to Give and Everybody (Backstreet’s Back); other stand out titles from its eleven-song track list include That’s the Way I Like It, Set Adrift on Memory Bliss and If You Want it to Be Good Girl (Get Yourself a Bad Boy). An irresistible album of teen pop, it proved itself to be a chart topper in over a dozen countries!  5x Platinum certified in the continent of Europe, Backstreet’s Back have since sold over 20 million copies in the world.

Following in the same tradition of the previous year, the Backstreet Boys went on tour to promote their new album. the Backstreet’s Back Tour began in December 1997 in Halifax, Canada and took them around the world to as far as Argentina. The setlist for the shows included various hits from their first two albums; several artists were also featured in the opening acts including Aaron Carter, Jimmy Ray and Chris Duran. During the tour, one of the group’s members, Brian Littrell had to undergo a heart surgery to fix a congenital defect. Although a couple of shows were pushed back as a result, Littrell was able to reunite with his friends onstage after a few weeks of recuperation.

At the peak of their popularity, the Backstreet Boys released their third and best-performing album, Millennium in May 1999. Their first record to be released in the United States and the rest of the world at the same time, it currently holds the record for having shipped the most shipments in one yearーa staggering 11,000,000 in 1999. The boy band’s biggest hit to date, it received five Grammy Award nominations and went on to spawn four singles, all of which landed amongst the top 40. The songs Larger Than Life, Show Me the Meaning of Being Lonely and I Want it That Way have since become some of the band’s most well-rembered tracks of all time. Regarded as one of the best-selling pop albums of all time, Millennium dominated the number one spot in countless charts around the world. Certified 13x Platinum by RIAA in the United States, over 40,000,000 copies of the album have been sold worldwide.

From there, the Backstreet Boys put forth two more albums: Black & Blue and Never Gone in 2000 and 2005 respectively, prior to Richardson’s leave from the band in 2006. Although they did not quite achieve the same level of groundbreaking success as Millennium, they still managed to rank in impressively on the charts. 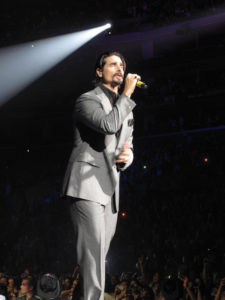 It’s no secret that Richardson has rejoined the Backstreet Boys back in 2012, and with the whole gang together, it was announced that the band will be performing a nine-show residency in Las Vegas under Live Nation. According to McLean, the residency will take off sometime in January of 2017. While that’s still a far ways away, the group has also taken to the stage multiple times these past few months; for instance, they just recently performed in September of this year at the iHeart Radio Music Festival. On top of all that, they even came out with a new song entitled, God Your Mama and Me with Florida Georgia Line, which is set to make an appearance on the country duo’s upcoming album, Dig Your Roots.

In other headlines, Richardson recently opened up about the infertility issues which he and his wife of sixteen years, Kristin has had to face with the conceiving of their second child. According to an interview which he conducted with Entertainment Tonight, they encountered no difficulties with their first born however things just “weren’t happening” when they tried for a second. Despite all they’ve faced however, the story does have a happy endingーthe couple welcomed their second child, Maxwell Haze into the world in July 2013, however there’s no doubt that the road to that point was a bumpy one!

If you’d like to stay up to date with Kevin Richardson of Backstreet Boys fame, you can do so by following his online presence on social mediaー you can find the star on Twitter (@kevinrichardson) as well as on Instagram (@kevinscottrichardson). Don’t forget to also check out his official Facebook page for some of the singer’s latest news!