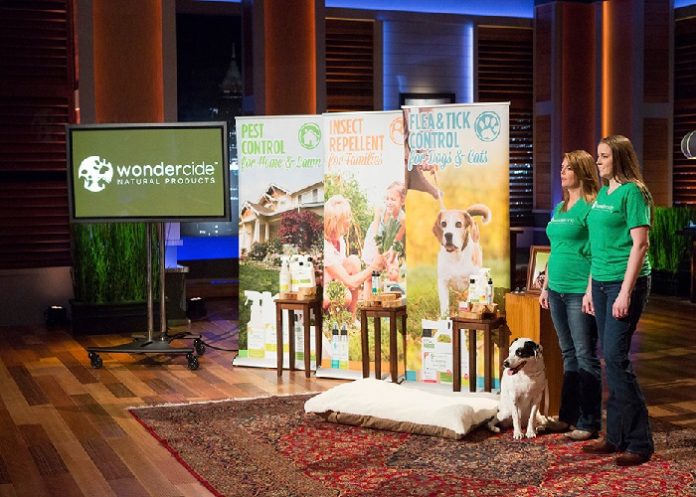 Wondercide co-founder Stephanie Booth was devastated in 2008, when her beloved dog Luna became seriously ill. Stephanie was shocked to discover from her vet that her dog had been poisoned by commonly used flea and tick treatments, and had developed pesticide poisoning with symptoms ranging from seizures to chronic skin issues and liver failure. Stephanie stopped using the harmful bug repellents on her pet and eventually managed to nurse her back to health, but she was inspired to find a safer alternative so that other pet owners could treat their furry friends more safely.

Her research into the subject soon revealed that although the pet care market in the US alone is worth in excess of $60 billion annually, the vast majority of tick and flea treatments contained dangerous levels of toxic chemicals, and she resolved to develop a safer alternative.

Even though Stephanie, a real estate executive, had no specialist knowledge in chemistry, she quit her job and founded the Wondercide business, alongside friend and fellow Austin resident Laura Alter, and the pair began a long period of research into a safer form of pesticide for pets.

After a solid two years of product development, Wondercide had been developed, it was one hundred percent free from any toxins, contained only organic ingredients, and was completely safe for use on animals, children, or even around the home or garden. Sales began from the Wondercide website soon afterwards, and although business took a few months to pick up, eventually the company was achieving sales revenue worth millions annually, however in order to grow the potential sales even further, Stephanie and Laura needed the assistance, and investment, of a shark, in order to bring Wondercide into large pet care retail chains, and with that aim in mind, they appeared on the show in March 2016.

Stephanie and Laura entered the Shark Tank with a third partner, Mercy the ‘Wonderpup’, and after announcing they were seeking a $500,000 investment in exchange for 5% equity in the business, they launched into their pitch by telling the Sharks about the dangerous nature of animal care products that contained such high levels of toxic chemicals.

Stephanie told the sharks about her experiences with her own dog, and the health problems that Luna had suffered back in 2008. She detailed her research and her subsequent discovery that it was conventional flea and tick treatments that had caused the problems, and her decision to find a better, safer alternative for other animal owners.

Laura continued by explaining that Wondercide worked directly on pets, or children, or even on the lawn, but it was the only completely safe option available as it was organic, effective, laboratory tested and made in the USA. She told the sharks that the business needed their help to assist in getting their products onto the shelves of major retailers, and make Wondercide products available to many more potential customers.

Kevin O’Leary inquired if Wondercide was for pets only, or could be used around the house, and Stephanie explained that it was suitable for any areas of the home, in the kitchen, on carpeting or on furniture. In addition the product was also non-staining, completely natural and had no odor.

Robert Herjavec spent a few moments getting to know Mercy slightly better, while Mark Cuban asked the entrepreneurs what exactly made Wondercide so different from all the similar pesticides available.

Stephanie explained that most pesticides contained approximately 95% water, and just 5% of active ingredients, which were also toxic chemicals, Wondercide by comparison contained no water or chemicals, but had same effective power as industrial pesticides, while containing only food-grade ingredients.

Robert Herjavec told Stephanie that the focus on animals, children and the home was a little confusing, and asked if the business was looking to expand in all areas, or just the pet market. Stephanie confirmed that the current strategy was to expand into the pet market, but safe pesticide use throughout the home was the ultimate aim for the business.

Stephanie and Laura were well prepared in the tank, and so far things had gone fairly well for them, their professional attitude and commitment to making consumers lives healthier was impressive, but when Robert Herjavec asked them if they had any sales, and Stephanie told him that Wondercide had so far racked up over $4 million in sales, the sharks suddenly perked up and the questions came flying thick and fast.

Kevin O’Leary as usual was interested in such high sales figures, and he wanted a breakdown of the figures. Laura revealed that 80% of the sales had been online, with 75% of them being made in the pet care products market.

Robert Herjavec asked for more information about how the business had been started, and Stephanie explained how she had left her career in real estate and become a real life ‘mad scientist’, in order the develop the chemical free Wondercide range, using a trial and error method with natural products until she found a formula that was completely effective.

Daymond John inquired what profit margins the company achieved on its products, and Stephanie revealed that across its entire product range, Wondercide had a 70% profit margin. It was an impressive figure and Daymond was particularly impressed, ‘70%? That’s like talking dirty to me’ he declared, which brought a quick bout of laughter from the entrepreneurs.

Mark Cuban wanted to know what the $500,000 investment would be used for if the pair got a deal in the tank. Stephanie revealed that they wanted to hire key sales staff, in order to build up a network of wholesale customers, and begin growing the Wondercide brand in retail stores.

Mark couldn’t see why Wondercide would want to take on ‘an added layer of risk’ by chasing retail sales when the online business was doing so well. Kevin also interjected, pointing out that selling to wholesalers would inevitably bring the impressive profit margins down.

Laura asserted that we live in a convenience driven society, and the ability for customers to pick up Wondercide products at retail stores was a vital part of the business strategy. She assured Kevin that they had no intention of letting the impressive online sales diminish, but they considered a move into retail stores as the way to get improve brand recognition and pave the way for increased sales in the future.

Daymond John announced he liked the business, and he had an offer to make. He would provide the requested $500,000, but only in exchange for 15% equity. Laura and Stephanie exchanged a quick look and they were clearly not too impressed with Daymond’s offer. They told him they would ‘not be comfortable’ giving away 15% of the company, but fortunately Kevin O’Leary had an alternative offer for them to consider.

Kevin would supply the $500,000, and receive royalties on each unit sold at the rate of 6.75%, until $1.5 million had been repaid. He would then receive 3% equity in the business simply because he was ‘Mr Wonderful’. Robert Herjavec remarked that it was a good offer in his opinion, but Stephanie and Laura still did not seem overly impressed. They told Kevin that they could get a 6% loan from any bank, but Kevin replied ‘But it’s not Mr Wonderful debt’, and Daymond, who still had not received a definite answer on his own offer observed ‘You keep on giving us reasons why you shouldn’t be here’.

Several of the sharks clearly liked the Wondercide business and were open to a deal, but the high company valuation was the stumbling block to a successful deal. Kevin told the entrepreneurs that he would not even get out of bed in the morning for 5% equity, and the tension for the Wondercide pair rose even more when Mark Cuban suddenly announced that he was not interested in helping the business grow into bricks and mortar retail outlets, and he was out.

Daymond announced that the best deals were made when both parties were a little uncomfortable, and pressured Stephanie and Laura for an answer, but they were clearly more than a little uncomfortable with giving away 15%. Robert Herjavec then quickly joined Mark Cuban in dropping out, and there was an uncomfortable moment, until Lori suddenly offered a third alternative for the pair.

The queen of QVC suggested a deal that would supply the $500,000, in exchange for a 50 cent per unit royalty until the loan was repaid, she would then receive 3% equity in the Wondercide business. Stephanie asked Daymond if he would be interested in joining Lori’s deal, but he declined to join his fellow shark. The entrepreneurs appeared to be hurriedly discussing the various deals until Lori suggested they make a decision, because circumstances in the tank ‘could change fast’. That seemed to spur Stephanie and Laura to finally agree on a decision, and Stephanie announced ‘Lori, we’d love to do a deal’.

Wondercide Now in 2018 – The After Shark Tank Update

Immediately after filming Laura and Stephanie were overjoyed to have struck a deal with Lori, and enthused that the offer, with its low equity and royalty clause, aligned their own interests with Lori’s perfectly, and the partnership seems to have brought nothing but success to all involved since the segment first aired.

Stephanie and Laura may have been advised by a few of the sharks that entering the retail market was a risky endeavour, but their vision for Wondercide was for it to be available immediately for potential customers, and they knew from experience that some customers simply did not want to wait a few days for an online order to arrive.

The $500,000 investment they received from Lori Greiner was utilized to hire key personnel, including the first salesman at the company, which is impressive for a company that achieved almost $5 million in sales without any sales professionals at all, and the introduction of a sales manager has led to impressive results. By August 2016 Laura was reporting that the Wondercide brand was now stocked in a variety of pet care stores, and was available in over 650 retail locations nationwide.

The range of Wondercide products has grown since filming took place too, and the business now supplies thirty products that range from pet care, to lawn care, and the companies EcoTreat, a natural pest control concentrate is being hailed as a miracle product by some gardening professionals. Stephanie also revealed recently that the Wondercide business was looking into the possibility of developing a vinegar based weed-killer that will kill weeds, but not kill grass, although she admits that Wondercide is not the only company looking into such products.

Recently Laura spoke about why she believes Wondercide was so successful in the shark tank. She feels that the sharks knew of the high level of consumer demand for safe and effective household products, and the mission-driven nature of the Wondercide business helped install confidence in their pitch, and enabled the sharks to see their passion and commitment to making the company grow, because after all Wondercide is more to Stephanie and Laura than just a way to make money, its also a way for them to follow their dream of helping ordinary families live better, and healthier lives.