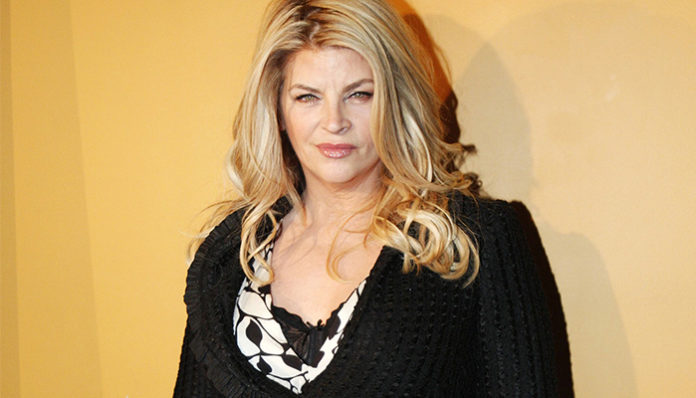 Kirstie Alley is an American actress who is best recognized for her portrayal of Rebecca Howe in the sitcom, Cheers. Unlike many other show biz celebrities, acting wasn’t something that Alley fell into right from the get-go; in fact, she spent her early adulthood working as an interior designer. However fate eventually took a different turn for the Kansas-native, who had the opportunity to appear as a contestant on the game series, Match Game. Proving to be a tough contender, Alley won through several rounds before appearing in another game show called, Password Plus in 1980. As one thing led to another, she was soon pursuing a professional career in the entertainment industry by the early 80’s. At the age of thirty one, Alley made her acting debut on the big screen in the sci-fi feature film, Star Trek II: The Wrath of Khan in 1982.

The next few years following her debut, Alley played a variety of roles in a series of smaller films such as Blind Date (1984), Runaway (1984) and One More Chance (1983). She also starred on a television series for the first time as a guest character in the 1983 ABC series, Masquerade. Since then, the actress has received an ample amount of screen time, having appeared in more than seventy projects over the past three decades. Having achieved many feats during her time, it’s not surprising to know that Alley has accumulated many industry accolades throughout the years including two Primetime Emmy Awards, two People’s Choice Awards and a Golden Globe Award, amongst six nominations. A three-time American Comedy Award nominee, Alley’s accomplishments have also been honoured with a star on the Hollywood Walk of Fame, as of 1995.

While acting may be the one that she’s best known for, Alley has also starred in a number of other television programmings such as talk shows and reality series. No stranger in front of the cameras, the actress has been a guest in The Arsenio Hall Show (1990), Late Night with David Letterman (1993), The Rosie O’Donnel Show (1996), Larry King Live (2005) and Jimmy Kimmel Live! (2012), to name a few. Back in 2011, Alley was also a contestant on the popular ABC competition series, Dancing with the Stars, where she was partnered up with professional dancer, Maksim Chmerkovskiy. Praised for their applaud-worthy performances on the stage, she eventually took home the second place title at the end of the season.

So what has the actress of Cheers fame been up to these past few years? What are some of the stand outs from her latest projects? What happened to Kirstie Alley? Where is she now in 2018? 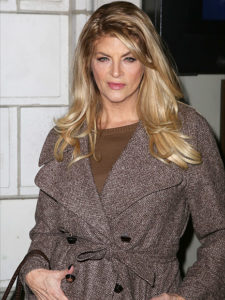 Born on January 12, 1951, in Wichita, Kansas, Kirstie Louise Alley is the daughter of Robert Deal and Lillian Mickie, the owner of a lumber company and a house wife respectively; she has two siblings, a sister named Colette and a brother named Craig. Growing up in her teen years, Alley was a student at Wichita Southeast High school where she later graduated from in 1969. Following her high school graduation, she went to Kansas State University where she studied drama briefly before dropping. Having hung out with the wrong crowd, there was also a period when she fought against a drug addiction. Pulling herself back together after receiving treatment, she relocated to Los Angeles where she began working as an interior designer.

In 1979, Alley was chosen to be a contestant on the popular reality game series, Match Gameーa show where contestants had to try to complete multiple fill-in-the-blanks, while trying to match their answers to those provided by celebrity panelists. Flying through the individual rounds, she soon won over $6000 from her time on Match Game. Trying her luck once again, she later took part in a second game show, Password Plus in 1980ーa series in which contestants, paired with a celebrity partner, try to guess a given “password” given various clues. Perhaps it was partially due to her brief onscreen time, but Alley was eventually offered a part in the science fiction blockbuster, Star Trek II: The Wrath of Khan in 1982ーit also served as her film debut. 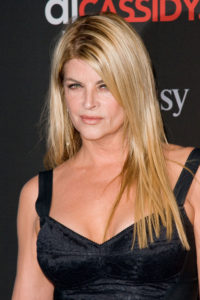 First hit the theatres in June 1982, Star Trek II: The Wrath of Khan was the second film of the Star Trek franchise, the first being that of Star Trek: The Motion Picture (1979). In contrast to the original which was quite a lacklustre success, the movie was a box office hit, earning a record-breaking $97 million across the globe. Regarded as the best Star Trek film by many, it revolved around James T. Kirk and his crew as they battled off against Khan Noonien Singh, a genetically engineered tyrant. Its star studded cast included William Shatner, Leonard Nimoy, DeForest Kelley, James Doohan, Walter Koenig and George Takei, amongst others; Alley played the part of Vulcan Starfeet officer Lieutenant Saavik. The sixth best grossing film of its year, Star Trek II: The Wrath of Khan won numerous awards including two Saturn Awards for “Best Direction” and “Best Actor.” Although the actress did not play a large role in the movie, it was a promising start to her still budding career.

The next few years, Alley appeared in a number of smaller films on the big screen including One More Chance (1983), Champions (1983) and Blind Date (1984); she also played various guest roles in the television series Masquerade (1983) and Sin of the Past (1984). Later in 1984, Alley landed her first major supporting role in the action film, Runaway. Directed by Michael Crichton, the sci-fi opened in theatres in the United States in December 1984. Set in the future where robots are as common as humans, it told the story of a police officer, who after discovering the plot of a homicidal robot, realizes that his son has become the target of his killing. In the movie, Alley played the part of Jackie Rogers, the former love interest of Dr. Charles Luther, one of the main characters who’s a sociopathic genius. Other cast members of the film include Tom Selleck, Cynthia Rhodes, Gene Simmons and Stan Shaw. Greatly praised for her performance in Runaway, Alley also received a Saturn Award nomination for the category of “Best Supporting Actress.”

In July 1987, Alley landed another lead role in the comedy, Summer School alongside Mark Harmon. Produced by Howard West and George Shapiro, the film revolved around a physical education instructor, named Freddy Shoop, whom while preparing for his upcoming Hawaii vacation, is informed by the vice principal that he must teach summer school classes for underachieving students. While Harmon portrayed the role of Freddy, the actress played the part of Robin Bishop, a history teacher next door who eventually becomes the love interest of Freddy. Although Summer School was opened to mixed reviews from critics, it was a hit at the box office, having grossed over $35 million in the US alone. 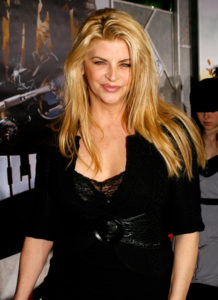 Later that same year, Alley received a breakthrough in her career she was cast as a series regular on the sixth season of the popular American sitcom, Cheers. First premiered on NBC in September 1982, the series revolved around a bar in Boston named Cheers, where several locals gather to socialize and drink. Although the show was almost initially canceled during its first season, it soon became one of the most highly watched and rated series in the US. Critically acclaimed, the sitcom has won countless awards including a total of twenty-eight Primetime Emmy Awards from over a hundred nominations. Ranked by the Writers Guild of America to be “The Eighth Best Written TV Series”, Cheers was notable for its huge ensemble cast including Ted Danson, Shelley Long, Nicholas Colasanto, Rhea Perlman, George Wendt, and many others. Alley’s character, Rebecca Howe, a business-woman first appeared at the start of season six, which hit the screens in September 1987; she ultimately continued playing the character until the series end in May 1993 after eleven seasons. To this date, it remains to be one of Alley’s most well-known roles on television.

In the fall of 1997, Alley landed another lead part in the NBC sitcom, Veronica’s Closet, which she was also involved with as an executive producer. Created by Marta Kauffman and David Crane, the comedy series revolved around Veronica Chase (played by Alley), the owner of a lingerie company who finds herself having to put her life back together after splitting from her cheating husband. Largely a hit amongst viewers, Veronica’s Closet continued for three years, spanning sixty-six episodes over three seasons before coming to an end in December 2000. Other cast members of the series include Dan Cortese, Daryl Mitchell, Wallace Langham, Kathy NAjimy, Ron Silver and Lorri Bagley. For her portrayal of Veronica, Alley garnered an Emmy Award nomination for “Outstanding Lead Actress in a Comedy Series”, a Golden Globe Award nomination for “Best Actress in a Television Musical or Comedy” and a Screen Actors Guild Award for “Outstanding Performance by a Female Actor in a Comedy Series.” 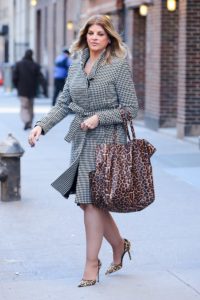 This spring, Alley played a small role in the Netflix original series, Flaked. Developed by actor Will Arnett alongside Mitch Hurwitz, the producer of Arrested Development, the series centres around a self-help guru named Chip who struggles with staying a top of his own lies. In the comedy, Alley portrayed the minor part of Jackie; other actors and actresses involved include Ruth Kearney, David Sullivan, Lina Esco, George Basil, Dennis Gublins, and multiple others. Flaked was first released across the globe on the online platform on March 11, 2016; met with a 80% satisfaction rating from audience members, it was renewed for a second season in July 2016, which is currently set for a 2017 release.

Another one of the actress’ projects this year is the comedy horror series, Scream Queens. Premiered on the Fox Network in September 2015, the show resolved around a serial killer, who terrorizes multiple individuals in various locations such as universities and hospitals. Generally well received, it is currently on its second season, which has just premiered recently on television on September 20, 2016. In it, Alley plays the role of Nurse Ingrid Marie Hoffel, one of the main protagonists who work at the hospital where the killer later resurfaces. Proving to be a hit amongst horror fans, Scream Queens has won multiple awards including a Critics’ Choice Television Award, a People’s Choice Award and a Make-up Artist & Hair Stylists Guild Award. The series currently airs every Tuesday evening on Fox.

If you’d like to stay connected with the star of Cheers fame, you can do so by following her on social mediaーyou can find Kirstie Alley on her Twitter account (@kirstiealley) as well as on Instagram (@kirstiealley). Don’t forget to also checkout her official website for some of her latest news!