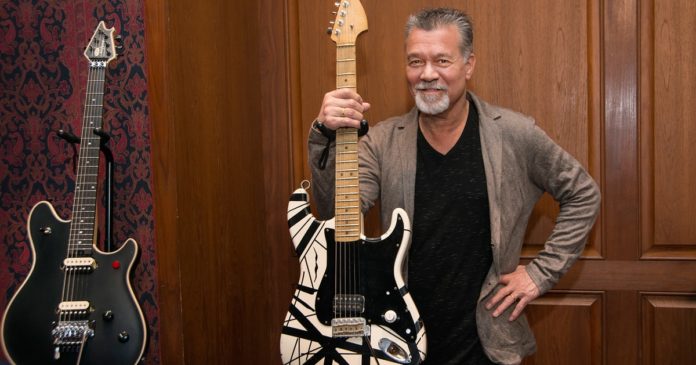 Touted as the king of guitar in classic rock, and heading up one of the biggest bands in rock music, Eddie Van Halen has had quite a ride to fame. With his distinctive tapping guitar playing alongside his signature tone, nearly every rock aficionado can recognize the work of Van Halen in a matter of seconds. But despite this distinctive sound, not many fans can name a recent song by Van Halen. So what has he been up to in 2016? Here, we seek to answer just that.

While the legends aren’t true that Eddie was born with a guitar in his hands, it’s quite clear that his love of music essentially started in the womb. Born Edward Lodewijk van Halen (taking his middle name from the Dutch spelling of Ludwig van Beethoven) in the Netherlands on January 26, 1955 to a family deeply steeped in music. Both his brother Alex and his father Jan Van Halen would work alongside Eddie to develop his musical talents. Before the introduction of rock into their lives, both the Van Halen boys would be formally educated in piano, though both would move on to other instruments, initially drums for Eddie and a guitar for Alex. They would soon form their first band with a few other boys from their school in Pasadena, California (where their family had moved not long after Eddie’s birth) where they would also play. During his teen years, the pair would swap instruments and Eddie would become inspired by the work of Eric Clapton to start truly developing his own sound.

The beginnings of what we would all recognize as Van Halen started off as Genesis in 1972. This name would not last long however, as there was already an English Prog Rock band by the same name making the circuits, and the Van Halen brothers swapped out their original name for Mammoth. During this time, they would come across someone who would give them a jumpstart into fame: David Lee Roth. Initially working with Eddie and Alex primarily to make money by renting them his sound system, Roth would be invited to join the band both for his talent and the simple fact that the fledging band wasn’t making much money and could then use the equipment for free. Roth would end up convincing the brothers that Van Halen should be the name of their band due to the mystery of the origins, and aided the band transition from mostly a cover band to something truly unique.

The Roth, Hagar and Cherone Years

The big break for Van Halen would be due to radio host Rodney Bingenheimer, known now as the man who introduced such other bands as the Sex Pistols and Guns N’ Roses to America through his show on Los Angeles KROQ. After a performance by the band in a local club, Bingenheimer wrote to KISS superstar Gene Simmons, encouraging him to pay a visit to the young startup. While Gene Simmons did view the band and even sign them up to release a demo tape, no record deal would come directly from this meeting. However, through word of mouth, Van Halen would be signed by Warner Brothers Records, partially due to a mutual contact in producer Ted Templeman. By 1978, they would have their debut self-titled album. This would begin a four year stretch of album releases for the band, with a one year break in 1983 before releasing “1984” in appropriately, 1984. Eddie would find more than fame though during this time, as in a Louisiana concert he would meet the then budding actress Valerie Bertinelli and kindle a relationship, marrying in 1981.

Within the band, despite success and newfound love, Eddie would continually find conflict, particularly with Roth. This would begin to tear at Van Halen in 1982, when Eddie offered to pick up a role in KISS, leaving his brother and bandmates behind. During this time he would also record a guitar solo for Michael Jackson’s hit “Beat It”, refusing any payment for his work. This separation was not destined to be however, as they would release 1984 together two years later with the instant classic “Hot For Teacher”.

After this hit, it would not be the Van Halens, but Roth that would leave the band. By July of 1985, Sammy Hagar would take his place. The newly led band (informally called Van Hagar by fans) would go on to record another 6 albums, with two to three years between releases for touring. Among these would be the Billboard Chart topper “Unlawful Carnal Knowledge” which would also win the 1992 Grammy for Best Hard Rock Performance. In terms of family life, Eddie would announce the birth of his son Wolfgang in 1991 (who would walk in his footsteps). This era would quickly come to a close however, as Sammy Hagar’s side project Los Tres Gusanos would gain popularity, as would his own solo work in Sammy Hagar and the Waboritas. For a very brief period, Roth would return to the band to make a Greatest Hits volume and attend the 1996 MTV awards before leaving again due to old disputes.

This second leaving would prove to be a bad omen, especially for Eddie Van Halen. Despite the joining of Gary Cherone and having an amicable relationship with the entirety of the band, the 1998 album “Van Halen III” simply didn’t have the fire that previous releases had. By the following year, Van Halen had been put on hiatus, not least of which due to Eddie’s health. After touring seasons involving acrobatic accidents, a bout of necrosis, and even in 2000 being diagnosed with tongue cancer, Eddie was in no shape to perform or record until 2004. This period would also see the separation of Van Halen from Bertinelli, who would file for divorce a year after the start of a new tour with Hagar in 2005.

The period before 2007 would come to be known as a time of false starts for Van Halen. With the aforementioned medical problems and divorce, only 2004 would see a release of an album ( “Best of Both Worlds” ) and tour with Hagar yet again. 2006 would see Van Halen contribute to rock music in a more controversial way, with two new instrumental tracks used for the adult film “Sacred Sin”. 2007 itself would be a rough time for Eddie Van Halen, though also a period of recovery as he would enter rehab for alcoholism- a disorder which took the life of his father. In previous years even his brother had commented on the change in him due to the drink, and it was hinted that it had been a major cause of dispute between him and his now ex-wife.

After rehabilitation, Eddie would see a revamping of Van Halen, including the hiring of his son as a bass player for the band. A new tour, and new love for Eddie would appear in the following year, as he would meet his current wife Janie Liszewski, who herself had been an accomplished actress and stuntwoman. Between 2008 and 2012, Van Halen would focus much of his effort in the development of guitars named after his son through the Fender Label. By 2012, Roth would be seen to finally rejoin the band and release their first album together since 1984, “A Different Kind of Truth”. Unfortunately, in August of the same year Eddie would be diagnosed with Diverticulitis and rushed to emergency surgery. This would slow his touring pace significantly, and as of 2016, there have been no upcoming dates officially announced for the band. This does not mean Eddie Van Halen has been down for the count however. There are rumors of an upcoming album and tour still on the horizon for the band, and Eddie has taken to a bit of philanthropy in the meantime. Most Recently in October of 2016, Van Halen partnered with the Mr. Holland’s Opus Foundation to promote music education in schools, donating 75 guitars to the cause in the process. In a recent interview for the foundation, Eddie recounted that seeing one of his guitars being played by a student was an extremely rewarding and emotional moment. It would seem that Eddie Van Halen, knowing how much his origins had influenced him, is sure to not only make more music in the future, but also future musicians.