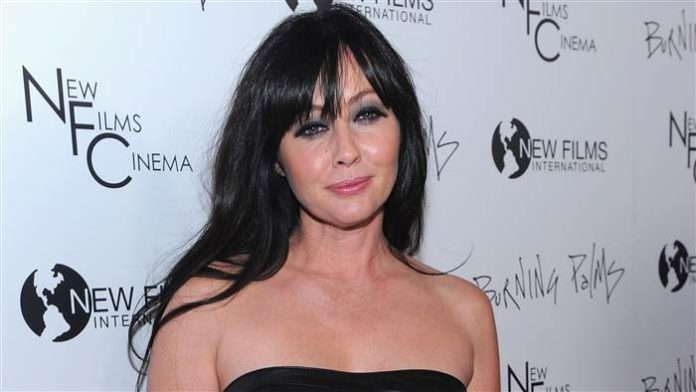 Shannen Doherty is an American actress who is probably best known for her role as Brenda Walsh in the drama series, Beverley Hills, 90210. An aspiring performer ever since she caught the acting bug as a young child, Doherty first stepped on to the stage in a production of Snow White at the age of eleven. A natural performer, she was soon cast as a guest character on the popular western show, Father Murphy (1981), a part which ultimately garnered her a Young Artist Award nomination. Over the next year, the young teen continued to appear in a number of television series including The Phoenix (1982), The Secret of NIMH (1982), Night Shift (1982) and Voyagers! (1982). After playing several small, minor roles, she eventually landed a recurring supporting part in the Emmy Award-winning series, Little House on the Prairie in 1983. However it wasn’t until 1990, when she secured a lead part in the Fox series, Beverley Hills, 90210, that she was propelled into celebrity stardom.

Since then, Doherty has taken on dozens of roles in both television and filmーincluding the mystery drama, Charmed (1998) which earned her much fame as an actress during the late 90’s. However her involvement in Beverly Hills, 90210 remains to be without a doubt, her best-known work. Some of her other stand out projects include that of Our House (1986), Highway to Heaven (1985), 21 Jump Street (1989) and Life Goes on (1990), to name a few. An outstanding performer, Doherty has received seven Young Artist Award nominations, two Saturn Award nominations, a Wand Award nomination, eight Youth in Film Awards, amongst various others. In the early 1990’s, she was also the winner of two Bravo Otto Germany Awards for the category of “Best Female TV Star.”

On top of her obvious acting talents, Doherty has also acted as an executive producer in several television series including that of Another Day (2001), Breaking Up with Shannen Doherty (2006), Suite 7 (2011), Off the Map (2015) and more recently, Bethany (2016). A well-known figure in the show biz industry, Doherty has also been invited onto countless talk shows such as Jimmy Kimmel Live! (2003), Late Show with David Letterman (2008), Rachael Ray (2008), The Wendy Williams Show (2010), the list goes on. The host of a reality horror series called Scare Tactics back in 2003, Doherty even competed as a contestant on the ABC dancing competition, Dancing with the Stars in 2010 (although she and her partner was the first couple to be eliminated)!

So what has the seasoned actress been up to these past few years? What are some of the new television series that she’s been involved with? What happened to Shannen Doherty? Where is she now in 2018? 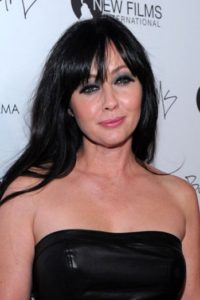 Born on April 12, 1971 Shannen Maria Doherty is the daughter of Tom and Rosa Doherty, a financial consultant and a beauty parlour owner respectively; she is of Irish, Scottish, and English descent. Growing up in Memphis, Tennessee, Doherty was known to have always looked up to her older brother, Seanーwho she often described as being “brilliant.” An avid horseback rider, Doherty spent much of her childhood riding in the stables and even dreamt of one day competing as an equestrian in the Olympics. It wasn’t until she moved to the California city of Los Angeles with her family in 1978, that she first began to develop an interest for acting and drama.

When she was nine years old, Doherty went with a friend to see a local production of the classic tale, Snow White. Catching the attention of the head director who was present at the event, she was ultimately invited to try out for the show; following through with the auditions, she soon found herself scoring a lead role. From there, her interests in acting only grew more passionate as she continued to take part in various children’s theatre productions. After a couple of years of pleading her parents for permission to work as a child actress, she eventually got the okay and made her television debut in the American western series, Father Murphy at the age of eleven. 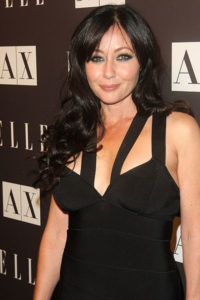 Created by Michael Landon, the western drama Father Murphy centred around protagonist John Murphy, a frontiersman who disguises himself as a local priest in order to care of several orphaned children. First aired on television in November 1981 on NBC, the series saw actor Merlin Olsen as John and also starred Moses Gunn, Katherine Cannon, Timothy Gibbs, Byron Thames and Lisa Trusel. Eleven years old at the time of filming, Doherty played the guest role of Drusilla Shannon, a character who appeared in two episodes of the show’s first season. While Father Murphy received mixed reviews during its airing, it served as a successful start to Doherty’s acting career.

Following her television debut, Doherty appeared in a couple of television series including The Phoenix (1982) and Voyagers! (1982). Later that same year, she also received a breakthrough when she was cast as a series regular in another western drama called, Little House on the Prairie. Based on a series of children’s novels of the same title, it revolved around the lives and adventures of the Ingalls, a family who lived in a small farm community in Walnut Grove, Minnesota during the late 1800’s. Noted for exploring various themes such as poverty, faith, prejudice and adoption, the NBC series was a huge hit, having won four Emmy Awards and two Young Artist Awards during its run. Doherty made her appearance in season nine of the show as Jenny Wilder; other notable members of the cast include Michael Landon, Melissa Gilbert, Karen Grassle, Richard Bull, Alison Arngrim, and many others. Little House on the Prairie ultimately continued for nine seasons, spanning more than two hundred episodes over a period of eight years.

Carrying on with her acting career in her teen years, Doherty landed several guest roles in multiple television series over the next few years including Magnum, P.I. (1983), Airwolf (1984), Little House: The Last Farewell (1984), Robert Kennedy and His Times (1985) and The New Leave It to Beaver (1985). A few years after first stepping in front of the cameras as a young actress, she received another break when she was cast as one of the lead characters in the drama series, Our House. Created by James Lee Barrett, the family show followed the lives and everyday challenges of the Witherspoon family, including the struggles of having three generations living underneath the same roof. In the series, Doherty played the role of Kris Witherspoon, the family’s fifteen year old teen daughter while actors Wilford Brimley and Deidre Hall played the parts of her parents, Gus and Jessica Witherspoon respectively. Commended for her performance on the show, the teen received multiple Young Artist award nominations. 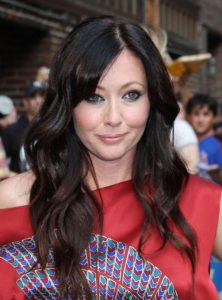 A couple of years after her time on Our House, Doherty received the largest breakthrough of her career when she landed a lead role in the American soap opera, Beverly Hills, 90210. Originally aired on the Fox Network in the fall of 1990, the teen drama followed the lives of a group of friends in the upscale Beverly Hills area, from their school days into the adult world. The first of five Beverley Hills, 90210 series, it saw Doherty as Brenda Walsh, the twin sister of Brandon, another one of the show’s protagonists; her character was a series regular from the get go until the end of the fourth season. Although the show was initially met with mixed reviews, the ratings eventually went up as the seasons progressed; at its peak, Beverley Hills, 90210 garnered close to 22 million viewers during season four. Having attracted millions of audience members throughout its run, it continued for close to three hundred episodes, spanning over a period of ten years. For her portrayal of Brenda, Doherty received two Young Artist Award nominations for “Best Young Actress Starring in a New Television Series” and “Best Young Actress Staring in a Television Series” in 1992. To this date, it remains to be one of her most well-known roles.

After starring in multiple television films throughout the 90’s, Doherty received her next big hit when she was cast as Prue Halliwell in the WB series, Charmed. Produced by Aaron Spelling and created by Constance M. Burge, it revolved around “The Charmed Ones”, a trio of sisters who each possess their own unique magical powers. Quickly achieving a cult following, the popularity of the series soared through the roof as it garnered close to eight million viewers during its first seasonーthe highest ratings which the network has ever seen for a television debut. Included in TV Guide’s list of “The 60 Greatest Sci-Fi Shows of All Time”, Charmed won copious amounts of awards including eight AOL TV Awards, two ASCAP Film and Television Music Awards, a TV Guide Award, amongst various others. While Doherty played the role of the oldest sister Prue Halliwell, actresses Holly Marie Combs and Alyssa Milano portrayed the parts of sisters Piper Halliwell and Phoebe Halliwell respectively. One of the longest-running dramas for The WB, it went on for eight seasons before ending in May 2006 after 178 episodes. 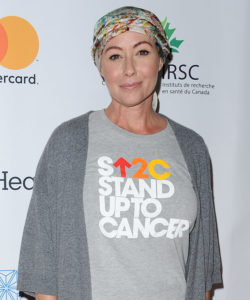 In the spring of 2015, the actress announced that she had been diagnosed with breast cancer. Following the diagnosis, Doherty quickly underwent medical treatment, although the constant battle has left her unable to return to work. Although the star has tried to remain optimistic since then, it was later revealed this year in 2016 that her cancer as spread into her lymphatic system. This October, Doherty recently opened up about her on-going fight, admitting that sometimes she feels like “[she] isn’t going to make it.” Just the other day, a heartbreaking photo of her lying on her side on a hospital bed was posted onto Instagram; in the caption, she encouraged fellow cancer fighters to “stay strong and positive.” Despite the cancer however, Doherty has stated that she feels “more in touch” with who she is now than before.

Although she hasn’t been able to return to acting since the ordeal, many of her previously filmed works will be hitting the screens this year including Rock in a Hard Place, Back in the Day, Undateable John, MallBrats and How to Make a Deal with the Devil. She also took part in an upcoming horror film called, Bethany as both an actress and an executive producer; according to what is listed on its imDB page, it will star actors Zack Ward, Stefanie Estes, Tom Green, Anna Harr, Leon Russom and Kevin Porter.

If you’d like to stay up to date and connected with the star of Beverly Hills, 90210 and Charmed fame (or perhaps you’d like to send her a few words of encouragement), you can do so by following Shannen Doherty on social mediaー you can find the celebrity star on Twitter (@DohertyShannen) as well as on Instagram (@theshando).