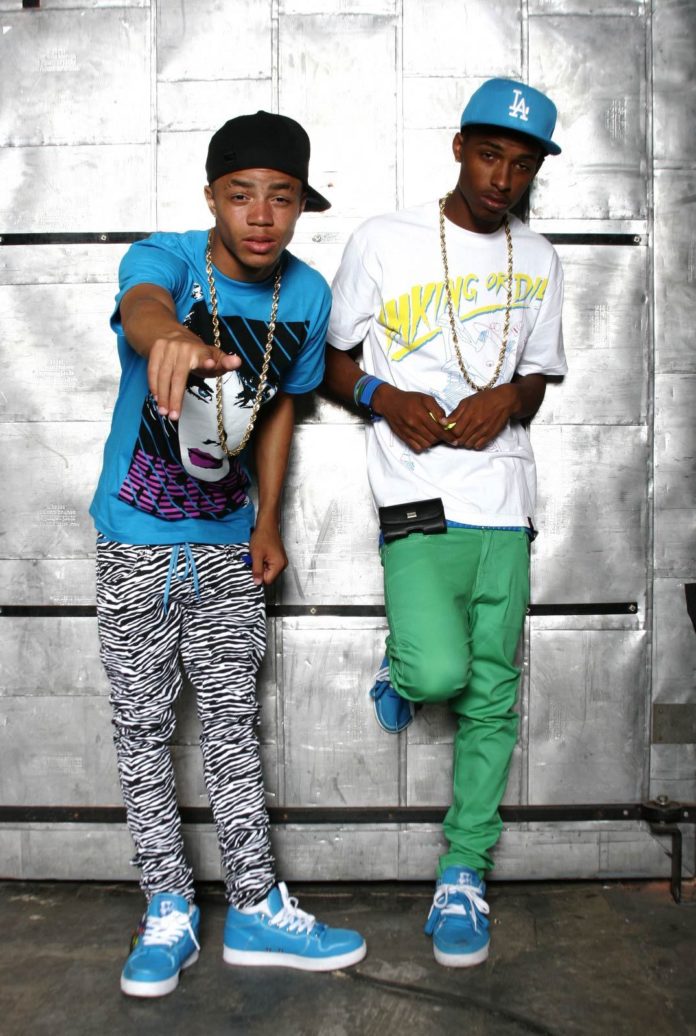 New Boyz is an American Jerkin’ Hip hop duo that consists of Dominic Thomas and Earl Benjamin. Although originally high school rivals, the two eventually befriended each other over their mutual musical interests. Both Benjamin and Thomas were interested in rappingーin fact, the former first began to rap at the young age of eight. Later purchasing some recording equipment together, they started to make their own beats, a process which was entirely self taught. Eventually adopting the stage names of “Legacy” and “Ben J”, the pair formed a group called Swagger Boyz in 2008 and released a self-distributed single entitled, Colorz which they promoted heavily on a MySpace page. However it wasn’t until the following year that they hit it big with their pop rap song, You’re a Jerk. Quickly climbing up the charts and becoming a national hit, it effectively paves a place for the duo in the world of hip hop.

Following another single release, New Boyz released their debut studio album, Skinny Jeanz and a Mic in September 2009. To date, they have released two full-length albums, six singles, thirteen music videos and one mixtapeーon top of that, the pair has also been featured in a number of songs by other artists such as Are You Feeling Me?, Dancin’ Around the Truth, I Like It Like That, and I’m on a Roll. At present, their best-performing single remains to be that of Tie Me Down from their first album, which features fellow hip hop artist, Ray J in its vocals. Rising in popularity over the past few years, New Boyz has gone from performing in high school gyms to singing on the red carpet the BET Awards in just a few years!

Although they started off as rappers, that didn’t stop Legacy and Ben J from taking on acting roles on television. They made their film debut playing a minor part in the 2012 comedy, We the Party which starred Mandela Van Peebles, Simone Battle, Moises Arias, Snoop Dogg and Mario Van Peebles. Two years later, they appeared as themselves in the musical drama, School Dance in 2014. Acting side, New Boyz have also made a handful of appearances on various shows such as The Mo’Nique Show (2011), So Random! (2012), Punk’d (2012) and Beyond the Talent (2012). At one point, they even performed on the stage of American Idol!

So what has the two friends been up to these past few years? Are they still actively recording in the studio? What happened to the New Boyz? Where are they now in 2018? 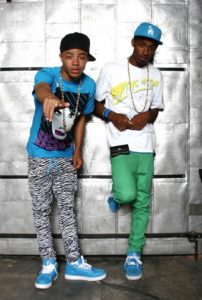 Legacy, otherwise known as Dominic Thomas was born in Hesperia, California on October 30, 1991. Growing up, he looked up to his grandfather whom he considered to be his role modelーnot only did he teach him about leadership, but he also instilled a love of music into the young boy. In his youth, he spent many hours drawing, writing poems and reading. When he was eight years old, he began rapping for the first time after watching one of Bow Wo’s music videos.

Ben J, also known as his real name Earl Benjamin, was born in Los Angeles, California on October 31, 1991. Interested in music ever since his early childhood, he began rapping in his school days and had always envisioned himself to be a popular and famous artist. During his teen years, whenever he got into trouble at home with his mother, he was sent to his room to write a rap about his feelingsーsomething which may have possibly helped to develop his rapping in the later years. In fact, a big reason behind why she supported his music endeavours was that she wanted to keep him out of trouble!

Both students at Hesperia High School as teens, they saw each other as rivals and even got into a few heated arguments prior to befriending each other over their mutual interests in musicーthe more they talked and spent time with each other, the more they ended up realizing they had in common. Their similar family backgrounds and the fact that their birthdays were only a day apart, only worked to draw them even closer! Later coming up with the idea of forming a vocal group, they pooled their birthday money together and bought a set of recording equipment. Wanting to save money, Thomas then dedicated much time towards learning on how to make beats for the duo’s songsーsomething which he ultimately succeeded at with the help of a computer program known as FRUITY Loops. Adopting the stage names of Ben J and Legacy, Thomas and Benjamin began rapping and performing together for the first time as The Swagger Boyz in July of 2008; they eventually came out with a single entitled, Colorz which they promoted on MySpace.

The New Boyz’s Music Career as a Hip Hop Duo 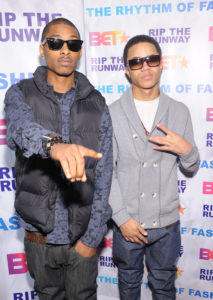 A year after their self-published release, the New Boyz released their first professional single, You’re a Jerk, in the spring of 2009 under Asylum Records. Produced entirely by Legacy, it peaked at number twenty-four on the US Billboard Hot 100 shortly after being made available in stores; it also reached number thirteen and number four on the Hot R&B/Hip-Hop Songs and Hot Rap Tracks Chart respectively. A huge hit upon its release, the single was also accompanied by a music video, which opened with Legacy receiving a text message that reads, “You’re a Jerk.” As of March 2010, You’re a Jerk has sold over one million copies and has earned Platinum status by the RIAA.

In August later that same year, Legacy and Ben J released their second single entitled, Tie Me Down. Another song from their upcoming studio album, it featured fellow R&B artist Ray J. The pair’s first collaboration with another singer, it peaked at number five on the Billboard Rap Songs Chart, at number twenty-two on the Billboard Hot 100, at number twenty-three on the Billboard Pop Songs Chart and at number forty-two on the Hot R&B/Hip-Hop Songs Chart. Fuelled by the success of their previous single, an extended play, Tie Me Down: EP was also later released, which consisted of three other songsーCricketz, So Dope and New Girl. Proving to be another hit, it soon received Platinum accreditation from the RIAA in the United States.

Following their two singles, the New Boyz eventually released their debut studio album, Skinny Jeanz and a Mic in April 2009. Heavily influenced by the Jerkin’ genre, it showcased thirteen hyphy, some of which featured other music artists such as Kydd-SB, D&D, O.N.E., Tga and Ray J. Upon its release that spring, the album entered the Billboard 200 at number fifty-six and spent a total of four weeks on the charts prior to falling off. Although Skinny Jeanz and a Mic was met with mixed reviews from critics, it was a commercial success, having sold over 35,000 copies within a few months. Inspired by hip-hop singers such as Kanye West and Pharrell Williams, it featured heavy lyricsーsome of which used double entendre. On the US Billboard Top Rap Albums Chart, the album settled nicely at number twelve while it peaked at number twelve on the Top R&B/Hip-Hop Albums Chart. Three music videos were later released for the songs Dot Com, So Dope and Cricketz.

A couple of years later, the duo came out with their second full-length album entitled, Too Cool to Care which was released in May 2011. Made available for pre-order through their website, those who opted for that received an MP3 download of its track Crush On You as well as a pair of sunglasses in a random colour. A collaboration effort between a team of music producers including Maejor, Prince n’ Purps, Kevin McCall, Bi Maejor and Kane Beatz, amongst others, it showcased sixteen tracksーmost if not all, featuring other artists such as Chris Brown, Big Sean, Sabi, YG, Charlie Wilson, amongst others; some titles from the track-list include Tough Kids, Magazine Girl, Can’t Nobody, I Don’t Care and Beautiful Dancer. Generally positively received, it charted on the Billboard Top Rap Albums, Top R&B/Hip Hop Albums and Billboard 200 Charts at number seven, number nine and number forty-one respectively. As of January 2012, the album has exceeded over 50,000 sales in the United States.

Too Cool to Care eventually spawned three singles: Backseat, Break My Bank, Better with the Lights Off. Out of the three, Backseat, which featured Dev and The Cataracs performed the best, having peaked at number twenty-six on the Billboard 200 and earning Platinum certification form the RIAA.

In April 2012, the hip hop duo released a single entitled FM$ under the Warner Bros. label. Another production by Legacy, it peaked at number eight on the US Bubbling Under Hot 100 Singles Chart and at number thirty-three on the Hot R&B/Hip-Hop Songs Chart. Released via a digital download, it was also included on their mixtape, Foolie Tape which was made available on April 1, 2012. A month after the release of the song, an accompanying music video for FM$ was released; since it was first uploaded online onto Youtube on May 7, 2012, it has garnered over 2.4 million views from across the globe. 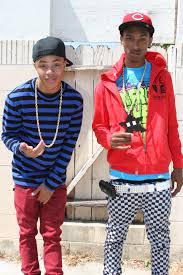 Although Legacy had announced back in February of 2013 that the duo was working on an upcoming album, it was eventually made known that the hip hop group had actually gone their separate waysーsomething that was later official confirmed by Ben J. After a few years of performing and recording together, the two artists ultimately decided to “share their talents with their fans individually” and embark on a solo career. Despite their dissolution however, the pair did reunite once again for the 2014 comedy musical, School Dance where they played as the New Boyz.

While Legacy hasn’t come out with any major music releases since their separation, he has released a number of songs, which are available for streaming on his Soundcloud account. Some titles which he’s recorded this past year include Swing IT, Clouds Cry, Show Money, Babygirl and Love & Memories. If you’re curious about what they sound likeーgo ahead and give his Soundcloud page a visit!

What about Ben J? According to his recent online activity, he has also recently taken to Soundcloud to release his first solo single entitled, Boodles. Originally uploaded onto the music sharing platform in August of this year, it has since been listened to over 2000 times on the site!

If you’d like to stay up-to-date and connected with the happenings around Legacy and Ben J, you can follow the former hip hop duo individually on social mediaーyou can find Legacy on Twitter (@DomDolo) or on Instagram (@Domdolo). As for Ben J, you can find him on Twitter under the username @ImBenJBro or if you’d like, you can also drop by his official website at BenJ100Tho.com!