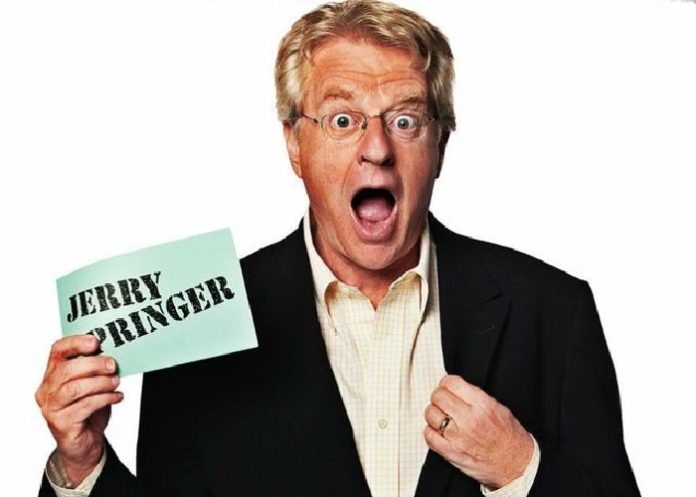 Some people enter the World to the smell of clean sheets and freshly cut grass, but when Jerry Springer entered the World it was in far less pleasant surroundings. He was born in February 1944, deep inside Highgate tube station, located in central London, England. The station was being used as a bomb shelter to protect civilians from Nazi Bombing during World war two, and it was a desperately crowded place to give birth. The baby born into such turmoil has since then grown into the politician, television host and much loved icon that he is today. As the star of his own long-running chat-show, he’s always entertained us, and sometimes been controversial, but what exactly is the chief ringmaster of the Jerry Springer circus doing today in 2016?

Jerry’s birth was in less than ideal surroundings, but he could so easily never have been born at all, instead an unknown victim to the war in Europe. His parents Richard and Margot were Jewish refugees who had escaped the horrors of Nazi occupied Poland just in time, while other family members were not so lucky. Jerry had lost a grandmother and grandfather to the concentration camps before he was even born, and other family members perished too before they could escape. Jerry’s father Richard ran a shoe shop in Wartime Britain, but in 1949 when the conflict was over, he emigrated with his family to the United States, and settled in Queens, New York.

Jerry attended Forest Hills High School and soon became interested in current events. One of his earliest memories was that of watching the televised 1956 Democratic convention, when he was particularly impressed by the youthful future presidential hopeful, John F Kennedy.

Jerry continued to nurture his growing interest in politics and went to Tulane University to study political science. After graduating with a BA degree in 1965 he hoped to pursue a career in law, and went on to Northwestern University to study for a JD degree, which he achieved in 1968. But the political World had a strong influence on Jerry, and that year he landed the role of political campaign adviser to Robert F Kennedy. It was an incredible experience for Jerry, but unfortunately it was not to be a long lasting one, the shocking assassination of Kennedy in June of that year ended Jerry’s role and he joined a Cincinnati law firm soon afterwards.

The Rise and Fall of Jerry Springer – Jerry’s Political Career

By 1970 Jerry Springer was ready to enter the World of politics himself. He ran for Congress in that year, and although he ultimately failed to take the seat of Republican Donald D. Clancy, he took a reasonable percentage of the vote considering the district was predominantly Republican. The experience coincided with Jerry, who was an Army reservist, being called up for service for a few weeks. He spent the time at Fort Knox and continued with his campaign when he returned.

Although he had been unsuccessful in his bid for Congress in 1970, Jerry remained popular among voters and he was elected to the Cincinnati city council the following year. As well as becoming established in the political arena, Jerry also began to become well known for his journalistic efforts at Cincinnati local radio station WEBN-FM, which was notably relaxed in its style, and occasionally controversial due to its irreverent humor. Jerry regularly commented on local politics and issues under the title ‘The Springer Memorandum’, and the media exposure grew his popularity even more. Jerry’s future looked bright, but one mistake was all it took to bring his career crashing down around him.

For a man who has displayed such a well-rounded character throughout his life, a man with such intelligence and stability that he’s became a role model to millions, it’s perhaps only fair that Jerry should be excused for what can only be described as a few stupid decisions, which ultimately cost him his reputation, for a few years at least. At some stage in the early 1970’s Jerry had visited a Fort Wright, Kentucky massage parlour. For some reason Jerry decided to pay for services rendered with a check, which was his first mistake, made all the more serious when the massage parlour was subsequently raided by police, and the check was discovered. The press got hold of the story and Jerry looked even worse when it was revealed that the check had bounced due to lack of funds.

Springer took the criticism on the chin and held his hands up to the incident, he admitted hiring a prostitute and resigned from the city council. A prominent newsman announced that Jerry’s career was over, but the novelty of an honest politician admitting to his mistakes had struck a chord with voters, and he regained his seat in 1975 after a landslide victory. In 1977 Jerry Springer was selected by the city of Cincinnati to be its major. Although the city now directly elects its major, at the time, one year was the maximum term allowed in the office, and in 1978 Jerry had no choice but to step down from the role.

Jerry had a few further attempts to break into the World of politics, culminating in 1982 when he campaigned for the democratic nomination to become the governor of Ohio, but he was unsuccessful and finished third in the vote. Nevertheless Jerry remained popular amongst voters and the democratic party, and during the eighties he turned back to journalism, and started to become better known amongst the general public.

Jerry’s commentaries at WEBN-FM led to him becoming employed as a political reporter at the small local NBC affiliate, WLWT. Although they had the lowest rated news show, the show blossomed due to Jerry’s incisive and well-articulated reporting. He eventually became the main news anchor, as well as the managing editor of WLWT, and he became the top rated news anchor in Cincinnati within two years, well liked, and known for his sign-off catchphrase of ‘Take care of yourself, and each other’.

By 1991 Jerry’s success led to his own show. Originally intended to be reminiscent of the long-running and hugely popular Phil Donahue Show, The Jerry Springer show began with a fairly serious focus. It concentrated on political issues such as gun control, poverty and housing, and boasted fairly heavyweight guests, among them the Reverend Jesse Jackson and formal Colonel Oliver North. The show didn’t flop, but it wasn’t the replacement for the soon to be retiring Donahue that its creators had intended, and they changed the format to make the entertainment far less respectable, and hopefully far more popular.

Jerry Springer spoke about his show earlier in 2016, and admitted that it had been a ‘circus’ during its twenty five year run, he went even further to state that it had ‘no redeeming social value’, but Jerry Springer has never been afraid to tell the truth, no matter what it costs him.

It’s true that TV audiences had never seen anything quite like the Jerry Springer show at the time. It was sensational, trashy, confrontational and outrageous. The subject matter went from politics to adultery, or prostitution, or hate groups, whatever would pull the viewers in, and it worked like a charm. The one thing that really made Springer stand out amongst the chat shows however, was the violence. Was it scripted? Possibly, but was it glorified? Yes, most definitely. The fights were usually not too violent, although the infamous confrontation between the KKK and the Israeli defense league was one of the few exceptions, real blood was spilled and chaos ruled the set for several minutes. The crowd cheered like crazy, the show was the highest rated of the year.

Of course, Jerry was always there to keep things in perspective, signing off with a final thought that always encouraged love and understanding, and like always, that viewers take care of themselves and each other, and that was the Jerry that became a cultural icon of the time, the lone voice of logic, in the midst of a scrum of depravity. That’s not to say that Jerry didn’t have plenty of lighter moments, like the episode featuring a gentleman who had married his horse, and the wonderful adult babies episode. The humor on Jerry’s show was understated and often not even acknowledged, but it was always magnificent.

The show eventually spawned a huge number of cultural acknowledgements, including features on The Simpsons, and for Jerry a spin-off show in Britain for a few years. Such was the popularity of Jerry’s format, that the shows resident bouncer, Steve Wilkos, who was never too far from the action when it inevitably kicked off, was awarded his own chat show in 2007.

Now in 2018, Jerry has reached the age of seventy two, it’s a surprising fact if you didn’t actually know how old is he. Jerry is still fairly youthful in his demeanour and appearance, and his attitude towards his career reflects the carefree element of his character. He spoke about his quarter of a century as the king of the chat shows earlier this year and revealed he finds the whole thing rather easy. As far as Jerry is concerned, all you need to do to be a successful chat show host is say three things, ‘You did what?’, ‘Come on out’ and ‘We’ll be right back’, that’s all you need, oh and you have to make it look easy, which is where it gets a lot harder for anyone who isn’t Jerry Springer.

Jerry has moved his show from TV to the internet in 2016, and the Jerry Springer Podcast is picking up a whole new generation of appalled and fascinated viewers. Jerry himself has no plans to stop working, perhaps a clue to his youthfulness is his conviction that work keeps him young, it’s still fun for him and he asserts that his biggest fear is that he won’t be working one day, even though he admits that is a strange attitude for him to have.

After such an eventful birth, life and career, which saw him regularly gain more viewers than Oprah during his peak in 1998, Jerry has attained an almost universal popularity. His influence professionally and personally on Western culture is perhaps undervalued, but it’s almost certainly overlooked. Maybe the greatest tribute to this defining character in our culture today is best left to the home fans of the New York Yankees, who never fail to salute a fight between opposing fans with that timeless chant that we all know so well, ‘Jerry! Jerry! Jerry!’.

Perhaps occasionally the man himself gets to quietly appreciate the tribute, Jerry is a lifelong Yankees fan and occasionally attends a home game. Jerry has been married to his wife Micki since 1973, and they have a daughter Katie, who was born in 1976. The couple live quietly in New York state and take great pains to avoid the kind of media frenzy that made Jerry such a household name.