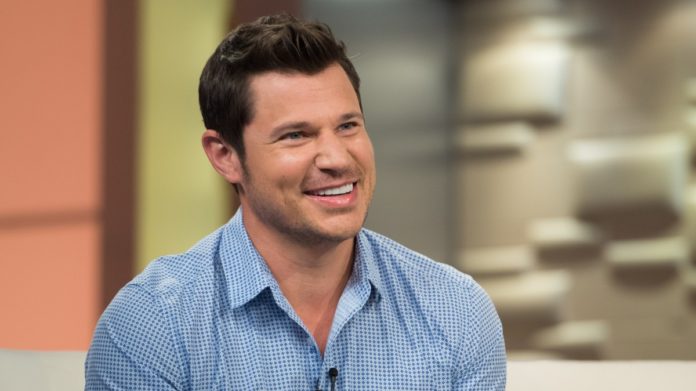 Nick Lachey is an American singer who is best known for his role as lead vocalist in the boy band 98 Degrees. He first began to sing professionally as part of a quartet with some friends throughout a park at Kings Island in his early twentiesーat the time, Lachey had been studying sports medicine at Miami University. Invited to join a vocal group by his friend, he eventually went to Los Angeles where he helped to form a boy band called 98 Degrees with Jeff Timmons, Justin Jeffre and his younger brother, Drew Lachey. Building up their contacts in LA, the group soon seized an opportunity to sing during a radio broadcast of a Boyz II Men concert show. Emphasizing the fact that they composed and wrote most if not all of their material, Lachey and the rest of his bandmates later signed on with Motown Records in the late 90’s.

After working tirelessly at the studio, 98 Degrees released their self-titled debut album in the summer of 1997. A modest success, it went on to sell over 500,000 copies in the United States and soon became the group’s first RIAA certified album. Since then, they have released a total of five studio albums, twelve singles and over a dozen music videos; their best performing work to date remains to be that of their second album 98 Degrees and Rising, which has since sold over four million copies in the US alone. During the initial leg of their career, they also embarked on several tours including the Heat It Up Tour and Revelation Tour in 1991 and 2001 respectively. Having achieved eight top forty singles, the multi-platinum selling 98 Degrees has sold more than 10,000,000 records across the globe.

Following the start of the boy band’s prolonged hiatus at the end of 2002, Lachey started a solo music career and eventually released his first studio album, SoulO in 2003 under Universal Records. As of 2016, the singer has released four full-length albums and eight singles. For his Gold certified hit, What’s Left of Me, Lachey won a handful of recognitions including two Teen Choice Awards (e.g. Best Love Song), an MTV Video Music Award nomination (e.g. Best Male Video: What’s Left of Me) as well as an American Music Award nomination (e.g. Favourite Male Pop/Rock Artist). On top of his career as a recording artist, Lachey is also known for playing the recurring character of Leslie St. Clare in the 2004 series, Charmed.

So what has the singer of 98 Degrees fame been up to lately? What are some of his latest projects? What happened to Nick Lachey? Where is he now in 2018? 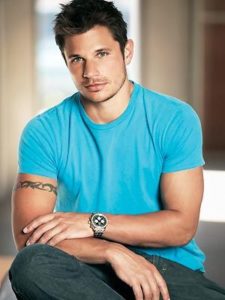 Born on November 9, 1978, in Harlan, Kentucky, Nicholas Scott Lachey is the son of John and Cathalyn Lachey; he has a younger brother named Drew Lachey, whom he’s worked with on multiple occasions. Raised majorly in the city of Ohio with his sibling, he went to Clovernook Elementary School in the suburbs of Ohio prior to going to the School for Creative and Performing Arts in Cincinnati, where he focused his time on voice. After graduating, he attended the University of South California in Los Angeles briefly to pursue an acting career. Despite his passion for the arts however, Lachey was also a huge sports aficionado; as a result, he soon took a detour from college to enrol at Oxford’s Miami University to study sports medicine. Not only did this satisfy his need to be around sports, but it also gave him the opportunity to remain close to his family.

In spite of this however, his love for music eventually won over as he was convinced by a friend, Jeff Timmons to be part of a new boy band that he was forming called 98 Degrees. Before long, they had recruited Justin Jeffre, one of Lachey’s friends from high school as well as Drew Lachey, his younger brother who had also been interested in music, to take part in the vocal group as well. With the ensemble of musical talents complete, the boy eventually landed themselves a recording deal with Motown Records within two yearsーmaking them one out of a small handful of bands to have formed independently as opposed to having been assembled by a label. 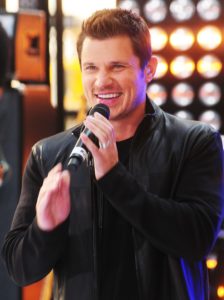 With the ball rolling, Lachey and his bandmates released their self-titled debut album, 98 Degrees in July 1997. Created in collaboration with a large team including Andrew Harrell, Rodolfo Franklin, Edward Ferrell and Derek Osorio, all of whom served as the project’s executive producers, it entered the US Billboard 200 Chart at number 145 and the US Top R&B/Hip Hop Albums Chart at number eighty-eight. Recorded over a period of a year, the album contained thirteen R&B and pop-oriented tracks such as Take MY Breath Away, Heaven’s Missing an Angel, You Are Everything and I Wanna Love You.

Although it only achieved moderate success in the charts, it eventually became a commercial hit, having sold over 500,000 copies in the United States as of January 2000. Given a C- rating from critic Robert Christgau, 98 Degrees went on to spawn two singles: Was It Something I Didn’t Say and Invisible Man, the first of which soon became their breakthrough hit, reaching number twelve on the Billboard Hot 100 Chart.

Following the initial effort, the boy band released their second album entitled, 98 Degrees and Rising in October 1998. Favourably received upon its release, the album included thirteen pop songs; some stand-outs include True to Your Heart and Fly With Me, which were featured in the feature films Mulan (1998) and Pokemon: The First Movie (1999) respectively. Also noteworthy are two cover renditions of She’s Out of My Life and I Do (Cherish You), which had previously been made famous by the King of Pop, Michael Jackson. 98 Degree’s best-selling album to date, it peaked at number for teen on the US Billboard 200 Chart and settled in at number twenty-eight on the Top R&B/Hip Hop Albums Chart; 98 Degrees and Rising also charted in several other countries such as Australia, New Zealand and Canada. Praised for its excellent production and well-crafted tracks, the album saw the release of four singles; out of the four, The Hardest Thing and Because of You ultimately peaked at number five and number three respectively on the Billboard Hot 100 Chart. Since it was first made available, the album has sold more than four million copies in the country, making it the band’s first Multi-Platinum Certified disc.

At the peak of their popularity after the release of their breakthrough hit, 98 Degrees released their third full-length album Revelation in September 2000. Another success for the band, it debuted at an impressive number two on the US Billboard 200 Chart and achieved over 276,000 sales within the initial weekーmaking it their best-charting album and the one to achieve the highest-first week sales. Favourably reviewed by Billboard Magazine, Revelation consisted of thirteen tracks (seventeen in the Japanese version) including the song Give Me Just One Night (Una Noche), which soon became the band’s most successful single. Out of its track list, My Everything was also eventually produced as a single, although it did not attain the same level of success compared to Give Me Just One Night (Una Noche), which went on to reach number two on the Billboard Hot 100. Not only was Revelation a hit in their native United States, but it also charted nicely in Australia, Japan and Canada where it peaked at number forty, number twenty-six and number two respectively.

After the release of Revelation, it wasn’t until a decade long hiatus later that the group reunited once again to record an album entitled 2.0 in 2013. The first record together since 2000, it was also their first album to be released through eOne Music, an independent recording label. Shortly after being made available, 2.0 debuted at number sixty-five on the US Billboard 200 Chart, making it 98 Degree’s lowest charting disc since their 1997 debut. Some titles from its thirteen-song pop track list include Microphone, Impossible Things, Can’t Get Enough, Girls Night Out and Lonelyーthe first two of which were spawned as singles.

During their hiatus in the 2000’s, Lachey signed with Universal Records and took off on a solo music career. His debut album entitled, SoulO was released in November 2003, a year after the split up of the band. Despite the fact that it was expected to be a hit, mainly because it was released during Lachey’s time on the popular television series, NewlyWeds, the album was a commercial flop; it reached number fifty one on the Billboard 200 and only sold 171,000 copies across the country. From there, it wasn’t until 2006 that the solo artist released his second studio album, What’s Left of Me. Proving to be more successful than his initial effort, it has sold over 441,000 units to date, making it his first Gold certified solo album. What’s Left of Me also gave rise to Lachey’s most successful single, What’s Left of Me; the ballad peaked amongst the top ten in three different US charts and remained on the Billboard Hot 100 for a period of 25 weeks. 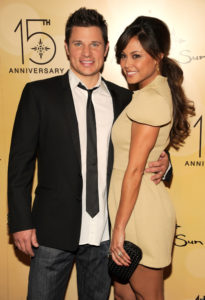 It was recently announced this September that Lachey and his wife of five years, Vanessa Minnillo, were expecting their third child together. The couple first began dating in 2006 after meeting each other during the production of a music video; they later became engaged in 2010 and tied the knot in July 2011 in the British Virgin Islands. The pair welcomed their first child, a son named Camden John Lachey into the world in September of 2010 and later added a second addition to their family, a daughter in January 2015. In October 2016, Minnillo was seen proudly showing off her baby bump at the Disneyland Resort in Anaheim, California with her husband and two kids.

In other news, Lachey and Minnilo made the headlines this past June when they put their Encino home up for sale in the real state marketーbut it looks like they won’t be straying too far away. The two later bought a new estate in the same area for $4.15 million; previously owned by late musician Jenni Rivera, the property sits on four acres of hills and became available in 2015 for $4.19 million although it has recently been lowered to the price of $4.175 million. Built in 1999, the French Normandy inspired home features over 9700 square feet of interior space, complete with a Juliet balcony and a wet bar in the living room.

If you’d like to stay up to date with the 98 Degree singer, you can do so by following Nick Lachey on social mediaーyou can find him online on Twitter (@NickLachey) as well as on Instagram (@nicklachey). While you’re at it, don’t forget to also drop by his official Facebook page and website for some of the star’s latest news!