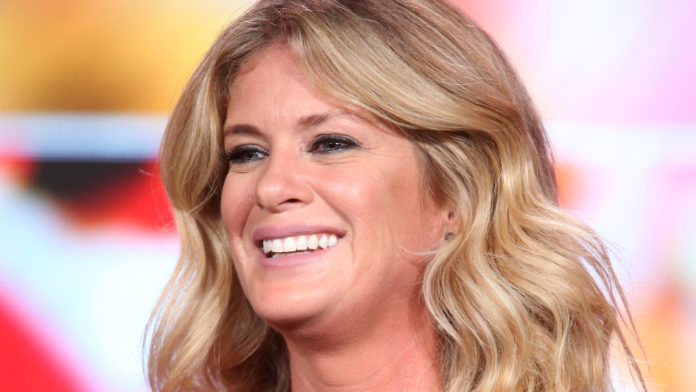 Rachel Hunter is a New Zealand supermodel who has been featured in numerous magazine covers such as Elle, and Italian Vogue. Although she dreamt of becoming a ballerina as a child, her dreams fell short after she was diagnosed with a rare hereditary blood disorder. When she was in her teens, Hunter was approached by a local photographer who invited her to New York for a modelling gig. Jumping at the opportunity, she made her way to the state where she signed with Ford’s Model Agency. Known for her beautiful blonde hair and piercing blue eyes, it wasn’t long before she rose to fame as a Cover Girl and as a Sports Illustrated model. Eventually wanting to branch out into acting, Hunter began taking drama lessons and soon made her appearance on television for the first time in an ice cream commercial in the late 1980’s. At the age of twenty-six, Hunter was cast in her first TV series, Mad About You (1992)ーalbeit it having been a minor role.

From there, it wasn’t until 1997 that Hunter appeared once again on-screen in a comedy drama called The Drew Carey Show, which starred Drew Carey, Ryan Stiles and Diedrich Bader. Going into the late 90’s and early 2000’s, the blonde starred in a steady stream of television series including Suddenly Susan (1999), Winding Roads (1999), Tripfall (2000), Best Actress (2000), MacArthur Park (2001), and Redemption of the Ghost (2002), to name a few. In 1998, she made her film debut in the comedy flick, Just a Little Harmless Sexーwhere she played the part of a lead character for the first time. Some other highlights from her years as an actress include You and Your Stupid Mate (2005), The Perfect Assistant (2008) and Gravity (2010).

Aside from acting, Hunter has been featured in a number of talk shows and documentaries over the years such as Late Night with David Letterman (1993), The Oprah Winfrey Show (1995), Stars in Their Eyes (2000), Everyday Elegance: Make Room for Baby (2001), and Howard Stern (2004). In addition, she has also taken part in several reality series including Strictly Come Dancing (2005), Celebrity Paranormal Project (2006), Celebrity Circus (2008), and She’s Got the Look (2010), amongst others. In 2010, Hunter was a contestant on the ABC dancing competition series, Dancing with the Starsーalthough her and her partner, Jonathan Roberts ultimately ended up being eliminated during the fourth week.

So what has the former model-turned actress been up to these days? What are some of her more recent projects? What happened to Rachel Hunter? Where is she now in 2018? 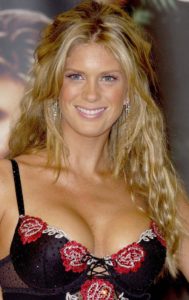 Born on September 8, 1969, in Auckland, New Zealand, Rachel Hunter is the daughter of Janeen and Wayne Hunter; she also has a younger sister named Jacqui. Growing up in the city of Glenfield, Hunter loved to dance and aspired to become a professional ballet dancer one day; however her dreams were soon curtained after it was discovered that she had a rare blood condition. When she was fifteen years old, her parents split up. A year after their divorce, Hunter was spotted and invited by a professional photographer to model in New York. Taking the opportunity to step into show biz, she promptly went to New York where she quickly signed on with Ford Models’ Agency. Showcasing her nearly perfect blonde hair and blue eyes, it wasn’t long until she landed a contract with Cover Girl Cosmetics and became their spokesperson.

Having continued to make herself known in the modelling world, she had graced the covers of several popular fashion magazines such as Cosmopolitan, Elle and Vogue by the time she was seventeen. That same year, she was also requested to model for the Playboy Magazine, although she eventually turned down the offer as she had considered herself too young for the gig. Although she had always stunned readers and fans with her statuesque figure, it wasn’t until she posted for the Sports Illustrated Magazine in 1989 that her popularity began to soar as a modelーbefore she knew it, she was regarded by many to be one of the most stunning supermodels in the world. Continuing to model in front of the cameras over the next few years, her next big appearance was in 1994 when she was featured on the cover of the annual swimsuit issue of Sports Illustrated, which was called “Dream Team.”

After many years of working as a model, Hunter began taking acting lessons in the mid 1990’s in hopes of one day landing a part on television as an actress. Through her hard work, she eventually made her debut on the small screen in 1995, when she was cast as a small role in the series, Mad About You. 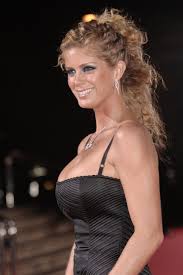 In 1998, Hunter made her film debut in the romantic comedy flick, Just a Little Harmless Sex. Her first major acting role, it revolved around a monogamous man, who after helping a stranded female in a broken-down car, finds himself being offered oral sex in return; after reluctantly accepting, the two are then arrested by a police officer who happens to have been passing by. In the movie, the blonde portrayed the part of a character named Marilyn; other members of its star-studded cast include Alison Eastwood, Lauren Hutton, Tito Larriva, Jessica Lundy, Robert Mailhouse and Michael Ontkean. Although Just a Little Harmless Sex received less-than-ideal reviews from critics upon its release that summer, it did serve nicely as Hunter’s first major step into the acting world.

Following a minor comedy role the next year, the actress was cast as another title character in the thriller, Two Shades of Blue (2000). Directed by James D. Deck, the film followed the life of a best-seller novelist named Susan Price (played by Hunter), who after being accused of murdering her fiancé, sets off to change her identity to search for the real murderer. Released in theatres on June 6, 2000, Two Shades of Blue featured actors Gary Busey, Marlee Matlin, Eric Roberts, Anthony Natale and Patsy Pease; despite its star-studded cast-list however, the movie was met with generally negative reviews upon its release, with many viewers criticizing it for its lack of a coherent storyline.

In July of 2003, Hunter starred in yet another independent thriller called Pendulum, alongside James Russo, Matt Battaglia and Scarlette McAlister. Set in Dallas, it centred around homicide detective Amanda Reeve (played by Hunter), who is assigned to investigate a series of serial killings of prostitutes in the city; surprisingly however, the trail ultimately leads her to two law students who seemingly have perfect alibis. Although Pendulum featured a nice cast of gorgeous young women, it didn’t enjoy a successful run in theatres as it only played in a select number of festivals prior to going straight to video.

After taking part in a number of smaller films, Hunter guest starred in an episode of the British Comedy Award-winning sitcom, The Vicar of Dibley in 2004. Playing as herself, she made her appearance in the first episode of the fourth season. Originally premiered in November 1994, the long-running BBC comedy takes place in a fictional village called Oxfordhire, in which a female vicar has been assigned. One of the most popular television programs the network has ever seen, it has won multiple awards including two International Emmys during the 2000’s. In total, The Vicar of Dibley ran for thirteen years prior to coming to an end in January 2007.

In the summer of 2005, Hunter starred as a contestant in ABC’s reality dancing competition, Dancing with the Stars. The first season of the series, it featured a group of six celebrities who were each paired with their own professional ballroom dancer partner; the judge’s panel consisted of Len Goodman, Carrie Ann Inaba and Bruno Tonioli. A huge hit upon its airing, it garnered well over thirteen million viewers for its premiereーthe second-biggest debut ever for an American reality show in the summer (only after Survivor). Partnered with Jonathan Roberts, the couple started off with the Waltz, a performance which earned them a total score of 20 points. Although they ended up being in the bottom two the following week, they later achieved the highest score during the third week, with their Tango. In spite of their come back however, Hunter and Roberts were ultimately eliminated during the fourth week. In the end, fellow actress Kelly Monaco and her partner, Alec Mazo came out as the winner in the finale.

In 2008, the former supermodel returned to her modelling roots by serving as a guest judge on the reality series, She’s Got the Look. Hosted by Kim Alexis, it featured twenty women (35 years or older) who competed against each other to be the next supermodel. While the original celebrity judges consisted of Sean Patterson, Roshumba Williams and Robert Verdi, Hunter was eventually invited to join the panel during a later episode. Following her time on the first season of She’s Got the Look, the former model turned actress returned as a guest judge on the subsequent second and third seasons of the competition in 2009 and 2010 respectively. 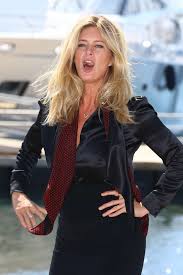 This August, Hunter put her gorgeous Hollywood Hills mansion up for sale in the real estate marketーthe price tag? $5 million. A charming country-style home, it features an arched fireplace, polished hardwood floors and modern chandeliers on the ceilings. Originally constructed in 1931, the 5000 square foot mansion even comes complete with walk-in closetsーwith one dedicated just for shoes! Boasting a beautiful view of downtown Los Angeles from the master bedroom, its quarter-acre outdoor area also includes a spa, as well as a swimming pool. According to sources, Hunter bought the mansion back in 2004 for a whopping $2.425 million.

It was also announced around the same time that Hunter will once again be returning on-screen for the second season of her TVNZ series, Rachel Hunter’s Tour of Beauty. Originally premiered on August 2015, the reality show follows the actress as she visits many of the world’s top destinations for various health and beauty treatments. Throughout its first season, Hunter visited a total of thirteen countriesーat one point, she even had her face shaven in Japan! Some of the other regions which she’s visited so far include Mexico, Korea, Dubai, China, Fiji, France, Australia, amongst a few others. Following the end of its first season, the second instalment premiered in April 2016 and opened with the blonde exploring what her hometown of Los Angeles has to offer in terms of health and beauty.

If you’d like to stay up-to-date and connected with the former supermodel, you can do so by following her on social mediaーyou can find Rachel Hunter on Twitter (@rachelhunterx) as well as on Instagram (@rachelhunterx). While you’re at it, don’t forget to also drop by her official website and Facebook page for some of her latest news!