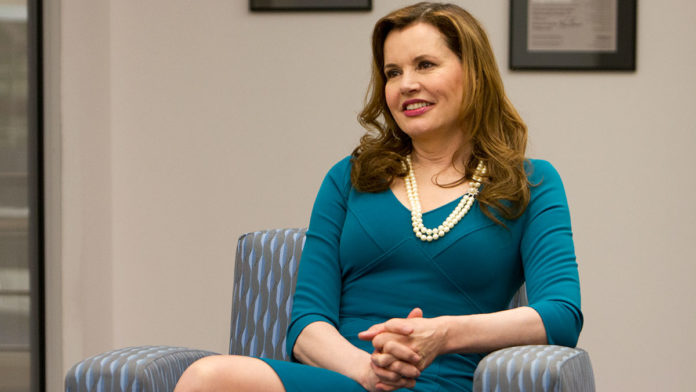 Geena Davis is an American actress who is known for her roles in the popular films Thelma & Louise and The Accidental Tourist. Standing at an amazing six feet, Davis initially worked as a model after graduating from college in the early 1980’s. After a few years of appearing in photo shoots and the like, she eventually landed a role in the comedy film, Tootsie in 1982ーit was also her debut on the big screen. Some of her other early projects as an actress include Knight Rider (1983), Buffalo Bill (1983), Fantasy Island (1984) and Riptide (1984). It wasn’t until late 1984 that Davis finally began to make her way into mainstream attention after securing the part of a recurring character in the NBC sitcom, Family Ties. Eventually in 1988, the actress received an Academy Award for Best Supporting Actress for her portrayal of Muriel Pritchett in the popular movie, The Accidental Tourist. Since then, Davis has starred in many productions both on the big and small screens.

Over the years, the actress has successfully become one of the most recognized stars in the entertainment industry. A veteran actress with dozens of credits to her name, Davis has also been on the receiving end of countless awards; since her Oscar win back in the late 80’s, she has garnered a Golden Globe Award (e.g. Best Performance by an Actress in a Television Series), a Boston Society of Film Critics Award, two Cannes Film Festival Awards, a National Board of Review Award, amongst numerous others. In addition, she is also a three-time Golden Globe Award nominee (not including the one which she’d won), a three time Academy of Science fiction Award nominee as well as a two time MTV Movie Award nominee.

A well-respected and recognized talent, Davis has been featured as a guest in several television talk shows throughout her multi-decade long career. So far, she has starred on The Rosie O’donnell Show (1996), The Tonight Show with Jay Leno (2000), Late Show with David Letterman (2006), Ellen: The Ellen Degeneres Show (2006), The Oprah Winfrey Show (2006) and Good Morning America (2015), to name a few. A regular face on the small screen, she has also appeared in multiple documentary series including Bravo Profiles (2002), Thelma & Louise: The Last Journey (2002), AFI’s 100 Years…100 Heroes & Villains (2003), Fear of the Flesh The Making of The Fly (2005), the list goes on. In fact, she has even lent her voice to various animated projects such as Fairy Tales on Ice: Alice Through the Looking Glass (1996), When Marnie Was There (2014) and Doc McStuffins (2013).

So what has the accomplished actress been up to recently? What new films or television series have she been busy with filming for? What happened to Geena Davis? Where is she now in 2018? 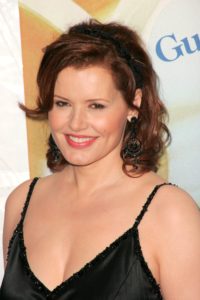 Born on January 21, 1956, in Wareham, Massachusetts, Geena Davis (Birth name: Virginia Elizabeth Davis) is the daughter of William F. and Lucille Davis, civil engineer and teacher’s assistant respectively; she has an older brother named Danforth. Growing up in the small town of Wareham, Davis developed an interest for the arts at an early age; she listened to music regularly as a young girl and eventually took up the piano and flute. In her later teen years, she also learned how to play the organ to a proficient enough degree that allowed her to act as an organist at her local church. As a teen, Davis went to Wareham High School however due to her tall stature, she had always felt rather uncomfortable amongst her shorter peers.

During that time, she also went to Sandviken, Sweden as an exchange student; she eventually returned to the United States after having mastered the Swedish language. After graduating from high school, Davis enrolled at New England College in Henniker, New Hampshire, where she later earned a Bachelor’s of Arts degree in Drama. An excellent student, Davis excelled in her classes and was also a member of Mensaーa social organization which offers membership to those whose IQ is tested to be at or above the 98th percentile. Following her college graduation, she moved to live in New York City where she eventually took advantage of her statuesque physique and became a model. 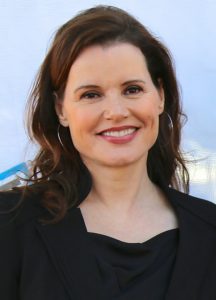 It was while she was working as a New York model that she eventually caught the attention of movie director, Sydney Pollack. Interested in having her star in his film, he offered Davis a small part in his comedy project, Tootsieーwhich eventually aired in theatres in 1982. After making her debut on the big screen in her twenties, the former model later found herself landing parts in various television series such as Knight Rider (1983) and Buffalo Bill (1983); the latter ultimately being Davis’ first time playing the role of a lead protagonist. Over the next few years, she continued to play a number of small parts in the shows Fantasy Island (1984) and Riptide (1984).

A few years after making her debut as an actress, Davis landed her first breakthrough when she was cast as a recurring character in the American sitcom, Family Ties. Starring Michael J. Fox, Michael Gross and Meredith Baxter Birney, the series revolved around the lives of former hippies Elyse and Steven Keaton and their family. First premiered on the NBC Network in September 1982, the show was critically acclaimed, having attracted tens of millions of audience members during its run. Having won numerous awards, including three Emmys and a Golden Globe, Family Ties continued for seven years, and eventually ended in 1989 after well over a hundred episodes. In the series, Davis played the recurring role of Karen Nicholson, a clumsy housekeepers whom the family had employed for a few episodes.

From there, Davis went on to play several different roles in a number of films including Fletch (1985), The Fly (1986), Beetlejuice (1988) and Earth Girls Are Easy (1989). In 1988, she received her second breakthrough when she was given a supporting role in the drama film, The Accidental Tourist. Directed by Lawrence Kasdan, the movie opened in theatres on December 23, 1988 to an overwhelmingly positive reception. Based on a novel of the same name written by Anne Tyler, The Accidental Tourist told the story of a writer named Macon Leary (played by William Hurt), who finds himself struggling to continue on with every day life after his son is tragically killed and his marriage collapses. In the critically acclaimed film, Davis played the role of Muriel Pritchett, an employee at an animal hospital who eventually finds himself falling for Macon. Nominated for several awards, The Accidental Tourist earned the actress her first major industry awardーan Academy Award for the category of “Best Supporting Actress.” 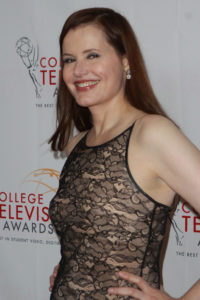 Propelled into fame with her recent well-received role, Davis soon found herself playing the lead role in the American road film, Thelma & Louise. Starring Susasn Sarandon, Harvey Keitel and the actress herself, the movie centred around two close friends, Thelma and Louise, who decides to set off on a road trip with eventual devastating consequences. Regarded as a classic feminist film, Thelma & Louise was a success at the box office, grossing over $45 million from a $16.5 million budget. Premiered in the United States on May 24, 1991, it was quickly hailed as one of the best films of the year. The winner of multiple awards and honours, Thelma & Louise also garnered the actress two awardsーa Boston Society of Film Critics Award and a National Board of Review for “Best Actress.”

The next year, Davis played yet another lead role in the comedy film, A League of Their Own. Written by Babaloo Mandel and Lowell Ganz, the movie told a fictionalized account of the All American Girls Professional Baseball Leagueーa real life woman’s baseball league. Boasting several big names in its cast list, the film not only starred Davis but also Tom Hanks, Anne Ramsay, Rosie O’Donnell Lori Petty and Madonna. Originally premiered on July 1, 1992, A League of Their Own revolved around two sisters who became members of the baseball league, only to find themselves going against each other in a growing rivalry. Selected to be preserved in the country’s National Film Registry, the movie was nothing short of being a huge success upon its release.

In 1995, the actress starred in the romantic comedy film, Cutthroat Island. An international co-production amongst multiple companies around the world, the movie followed a female pirate named Morgan Adams (played by Davis) who with her friends, races against a rivalling group to locate a hidden island that is said to contain luxurious treasures. Despite having been a major production however, Cutthroat Island suffered from a series of chaotic downfalls including multiple recasts and rewrites. Ultimately a failure at the box office, the film only managed to pull in $10 million from a $98 million budget. Although things didn’t go as well as planned, Davis’ acting was praised in the movie, as was its soundtrack and action scenes.

In the recent years, the actress has made a handful of appearances on television including Coma (2012), Doc McStuffins (2013) and Annedroids (2015). In 2014, she also guest starred in the popular medical drama, Grey’s Anatomy, playing the role of Dr. Nicole Herman, the head of fetal surgery. 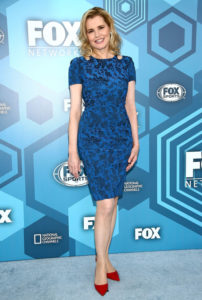 After portraying various small, recurring characters over the past few years, Davis landed a major role in the horror drama, The Exorcistー her first since Commander in Chief back in 2005. Debuted on the Fox Network on September 23, 2016, the series is adapted from a novel by William Blatty; it tells the story of a priest who makes a living by performing exorcisms on evil spirits. Filmed in Chicago, The Exorcist airs every Friday evening and is currently on its fourth episode. Met with generally favourable reviews, the series also stars actors Alfonso Herrera, Ben Daniels, Hannah Kasulka and Alan Ruck.

But it looks like that’s not the only thing that she’s been involved with latelyーDavis has also been busy filming and working on an upcoming science fiction film titled, Marjorie Prime. Directed by Michael Almereyda, the project is based on a Pulitzer Prize nominated production of the same name. According to a preliminary synopsis, Marjorie Prime will revolve around a group of individuals who are able to use a technological advanced method of producing holographic projections of those who have already passed away; in particular, the projections will be used to allow a young woman to spend time with her deceased husband. Besides Davis, other actors in the movie include Jon Hamm, Tim Robbins, Lois Smith and Stephanie Andujar.

If you’re a fan looking to stay connected with the former fashion model, rest assuredーyou can easily do so by following Geena Davis on social media. You can find the actress on Twitter under her handle @GDIGM. You can also stay up to date with her news by following her on her official Facebook page!