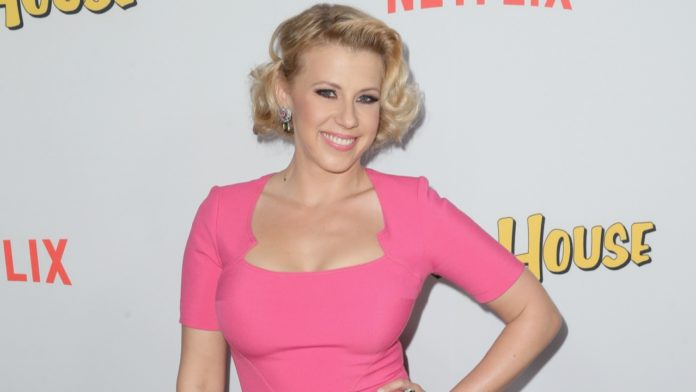 Jodie Sweetin is an American actress who made her television debut at the age of five in the popular sitcom, Full House. Her acting talent apparent as a young girl, she was brought to a talent agency at the age of four. After appearing in a series of commercials, she was cast in a small role in the comedy series, Valerie’s Family: The Hogans in 1987. Catching the attention of various producers with her stunning performance on camera, she soon secured a regular part in the ABC sitcom, Full House not long after her debut. From there, her popularity as a child actress only went up as she won over millions of viewers with her sweet charm and admirable acting. Since she first appeared on the small screen in the late 1980’s, Sweetin has successfully made a place for herself in the industry.

Although Sweetin is most widely known for her role as Stephanie Tanner in Full House, she also has a list of other credits to her name including Mother Goose Stories (1990), Brotherly Love (1996), Party of Five (1999), Yes Dear (2003) and Redefining Love (2009), to name a few. For her brilliant performance in the aforementioned sitcom, she was honoured with a Young Artist Award for the category of “Outstanding Young Comedienne in a Television Series” at the age of eightーmaking her one of the youngest actresses in the country to receive the award. In the subsequent years, she went on to receive a number of award nominations including four for the Young Artist Award (e.g. Outstanding Young Comedienne, Best Young Actress Under Ten Years of Age, Best Young Actress), one for a TV Land Award (e.g. Quintessential Non-Traditional Family) and another for a Teen Choice Award (e.g. Choice TV: Chemistry). To date, she has appeared in well over twenty television and film productions.

As with most celebrity stars, Sweetin has been featured in several television programs over the years including Celebrity Profile (1999), Chelsea Lately (2007), Good Morning America (2008), Biography (2009), The Bonnie Hunt Show (2009), and The Eric Andrew Show (2013), amongst many others. Back in 2006, she was also the host of the second season of Pants Off Dance Off, a dance competition which featured contestants stripteasing to various music video. More recently in 2016, Sweetin has been taking part in the ABC competition series, Dancing with the Stars as a fellow contestant.

So what other projects and endeavours have the former child actress taken on these past few years? Is she still acting on a regular basis? What happened to Jodie Sweetin? Where is she now in 2018? 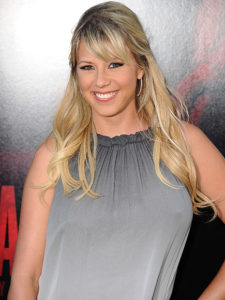 Born on January 19, 1982, in Los Angeles, California, Jodie Lee-Ann Sweetin was adopted and raised by Sam Sweetin, her uncle and his wife Janice; her biological parents had gone prison shortly after her birth.  Although she was taken into their custody at the age of nine months, the adoption was not officially formalized until she was two years old, due to various complications from her birth father being of one fourth Native American descent. Sweetin later revealed in an interview conducted many years after that she had always been told not to speak of her adoption in the public for fear that individuals would start to believe that acting was something she was forced into as a child.

In reality, it was quite the oppositeーas a young girl, Sweetin had always showed signs that she was a natural performer; she loved to act, something which soon garnered the attention of her adoptive parents. With urging and encouragement from family members and friends, they eventually took her to meet a talent agent when she was four years old in 1986. Noticing her potentials as a child actress immediately upon their meeting, the agent soon booked Sweetin for multiple commercial gigs. Not long after making her debut on national television, Sweetin was offered a guest role in one of the popular series running at the time, Valerie’s Family: The Hogans at the age of dive. Although that marked her official start on the small screen however, it wasn’t until she landed a regular part in the ever-so-popular American sitcom, Full House that she received widespread recognition as an actress. 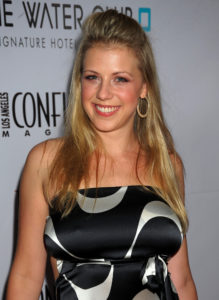 In late 1987, the same year as her television debut, Sweetin received a breakthrough when she was cast as Stephanie Tanner in the ABC sitcom, Full House. First premiered in the United States in September 1987, the series created by Jeff Franklin revolved around the life of Danny Tanner, a widowed father as he tries to raise his three young daughters up with the help of his brother-in-law and best friend. A huge hit upon reaching the screens, it quickly became one of the most watched comedies at the time.

While actor Bob Saget played the fatherly role of Danny, Sweet portrayed the part of Stephanie Tanner, the middle child of the family; other regular cast members include John Stamos, who played Danny’s brother-in-law, Dave Coulier, who played his best friend, Candace Cameron who played the oldest daughter and Mary-Kate and Ashley Olsen who played the youngest daughter, Michelle Tanner. In syndication since 1991, the series continued for a period of eight years, spanning eight seasons and close to two hundred episodes. Now a classic amongst sit coms, Full House won countless awards during its run in the 90’s including two Tv Land Awards, and five Young Artist Awards, amongst numerous nominationsーtwo of which went to Sweetin for her portrayal of Stephanie. 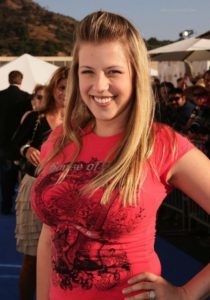 While she was filming for Full House, Sweetin also took on a couple of side projects including The All New Mickey Mouse Club (1989) and It’s Christmastime Again Charlie Brown (1992), the latter of which being a voice-over role. After the end of the sitcom, the young actress found herself playing a small character in another sitcom called Brotherly Love. Created by Jim Vallely and Jonathan Schmock, its plot revolved around the relationship of three brothers played by real life brothers Andrew, Matthew and Joey Lawrence. In the series, Sweetin spectacularly portrayed the guest role of Lydia Lump, one of Joey’s old classmates. Although Brotherly Love garnered a handful of award nominations during its run, it was eventually cancelled in May 1997 after two seasons.

Two years later, Sweetin took on a minor recurring role in the teen drama, Party of Five. One of her first projects to feature an ensemble cast, the Fox series followed the lives of five siblingsーBailey, Charlie, Julia and Claudia (played by Scott Wolf, Matthew Fox, Nerve Campbell and Lacey Chabert respectively) after the untimely loss of their parents from a car crash. Although Party of Five mainly targeted teens and young adults as its audience, it was noted for containing various mature themes such as domestic abuse, substance abuse and the long term effects of parental loss.

Named “The Best Show You’re Not Watching” by TV Guide in 1995, the drama was highly commended by critics, although it suffered from less-than-ideal viewership ratings initially. Despite rumours of being cancelled after its second season however, it eventually spiked in popularity after winning a Golden Globe Award for Best Television Series in 1996; Party of Five eventually went on to continue for another four seasons. In the award-show drama, Sweetin played the role of Rhiannon Marcus, a recurring character which appeared for two episodes during the sixth season.

In 2002, Sweetin appeared on the screens once again on the CBS sitcom, Yes Dear. Starring Liza Snyder, Mike O’Malley, Jean Louisa Kelly and Anthony Clark, the series told the story of two young couplesーThe Warners and the Hughes, who have outrageously different views on the art of parenting. Yes Dear aired on television in October 2000; syndicated halfway through the 2000’s, the sitcom went on to continue for over a hundred episodes, spanning six seasons. In it, Sweetin played a small character named Maryanne in the twenty-second episode of the third season.

Three years later in 2007, the actress lent her voice to a direct-to-video film called Farce of the Penguins. A parody of the 2005 French feature, March of the Penguins, the mockumentary revolved around a group of male penguins who set off to find love at a breeding grounds 70 miles away; they meet various characters along the way including a certain penguin voiced by the actress herself. Besides Sweetin, four other former Full House stars were also involved with the voicing of the film’s characters.

Since then, Sweetin has continued to play a series of small characters in a variety of television series including Redefining Love (2009), Port City (2009), Can’t Get Arrested (2011), Singled Out (2012) and Defending Santa (2013). However none of them would be of the same caliber as that of Full House. In 2015, she also played the role of Charlotte Disney in the film, Walt Before Mickeyーa biographical movie which focused on the early years of Disney founder, Walt Disney. 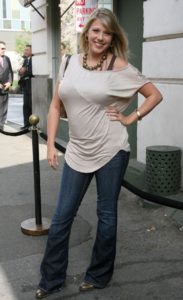 This February, Sweetin reprised her role as Stephanie Tanner in the much anticipated Full House sequelーFuller House. A Netflix original series, the series featured most of its original cast members with the exception of the Olsen twins, who had played the role of Michelle tanner in the 90’s show. Created by Jeff Franklin, Fuller House centres around D.J. Tannerーthe oldest daughter, who is now a veterinarian; however much like the premise of the original sitcom, she’s also a widowed mother of three children. Although praised for providing a dose of nostalgia to long-time fans of Full House, the series was mostly met with negative reviews upon its release. Having said that however, it did win three Teen Choice Awards, one of which was shared between Sweetin, Andrew Barber and Candace Cameron Bure. After the end of the first season, the show was renewed for a second season, which is currently under works.

Besides acting, Sweetin is also a contestant on this year’s season of the popular dancing competition, Dancing with the Stars. The twenty-second season first aired in March 2016 and eventually ended on May 24, 2016 after ten episodes. In it, the actress was paired with professional dancer Keoikantse Motsepe and although the two put up an impressive performance, they were later eliminated during the seventh week on May 9, 2016ーplacing them in sixth place. At the end of the season, actor Nyle DiMarco took home the winner’s title alongside his partner, Peta Murgatroyd.

If you’d like to stay up to date and connected with the actress of Full House fame, you can do so by following her on social mediaーyou can find Jodie Sweetin on Twitter (@JodieSweetin) as well as on Instagram (@jodiesweetin). If you’re a fan of Sweetin, you’ll probably also want to check out her official Facebook page for some of the latest news surrounding the star!