Cam Newton Net Worth – How Rich is Cam Newton 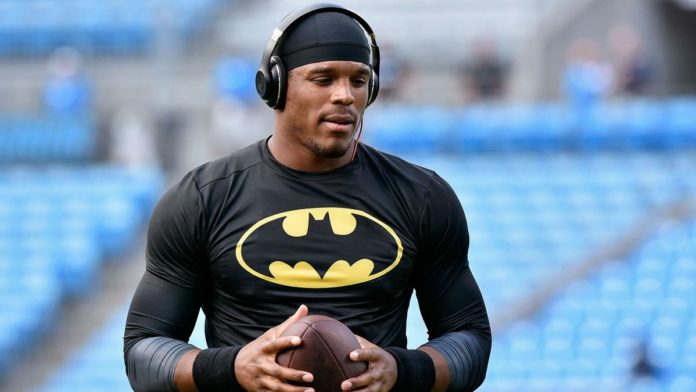 The National Football League is home to hundreds of different superstar athletes, and one of the most popular of those athletes is Cam Newton, quarterback for the Carolina Panthers. Cam has snatched headlines across his football career, even back when he was just playing in college. He’s a highly decorated player, but how much money does he make for his outstanding play? In this article, I’m going to be talking about Cam Newton’s football career, and how he has been able to generate so much money throughout it. Without further ado, let’s take a closer look at the life of this young gunslinger.

How did Cam Newton make his money & wealth?

Cameron Newton was born in May of 1989, in Atlanta, Georgia. He grew up with a lot of football in his life at an early age, since his father was a former NFL player. As a kid, Cam took a keen interest in baseball and basketball, but found that those interests faded as he entered high school. However, football still remained. He attended Westlake High School in Atlanta, and his stunning quality of play attracted a lot of attention among college recruiters. During his senior year, he was ranked the number 2 dual-threat quarterback in the country. He received a lot of scholarship offers before ultimately committing to play with the University of FLorida. 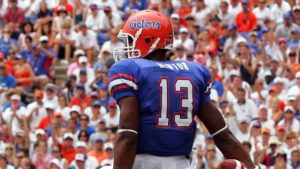 During his freshman year, Cam Newton actually played as backup to Tim Tebow. He didn’t get much game time until his sophomore year, when he suffered a terrible ankle injury during the season opener. He didn’t do very well during his time off, either. In a controversy, Newton was arrested for stealing a laptop from a fellow University of Florida student, and although the charges were dropped, he was forced to transfer from Florida shortly before the team played in the national championship game. He transfered to Blinn College, where his skill as a player really shined. He led the team to the 2099 NJCAA National Football Championship, and he was the most highly recruited Juco quarterback in the nation. Newton ultimately made the decision to sign with the University of Auburn.

This new school was a fresh start for the quarterback, and it would prove to be a very good one. He was made the starting quarterback of the 2010 season, and he had a strong start against Arkansas State, with 5 offensive touchdowns. Newton became an overnight sensation, and by October, there were already whispers that he would become a serious contender for the Heisman trophy. Newton led the Auburn Tigers to an undefeated season, which culimnated in a 28 – 27 victory against arch-rival Alabama. The game was historic due to the 24-point deficit that Newton and company were able to overcome. It was the largest in school history. Following that big rivalry win, Newton was able to lock down the Southeastern Conference title before eventually beating the Oregon Ducks in the 2011 BCS National Championship game. Not to mention, he was named the winner of the Heisman Trophy in 2010, by a landslide. 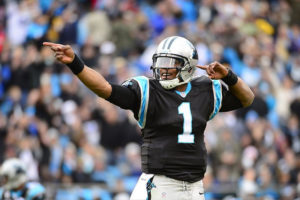 Following this incredible college career, it’s no wonder that he was highly recruited entering the NFL. In 2011, Newton was the first overall pick in the NFL Draft, signing with the Carolina Panthers. Unfortunately, Cam is only one man, and he wasn’t able to pull the team completely out of the trench. The 2011 Panthers ended with a 6 – 10 record which, while an improvement, still was not ideal. During the 2012 season, Cam continued to struggle with the team (and a sophomore slump). They continued to improve, with a 7 – 9 record and a second place finish in their division. The Panthers saw a massive improvement in 2013, which made for Newton’s first playoff appearance in the NFL. The team had earned a 12 – 4 record and a first round bye week during the playoffs, before ultimately falling the the San Francisco 49ers in the divisional round. It was a disappointment, but Cam wasn’t willing to give up just yet.

Cam Newton continued to work with the team through the 2014 season, where a 7 – 8 – 1 season resulted in yet another divisional round loss in the playoff. Last year, however, Cam Newton and the Carolina Panthers ascended to new heights. The season started with Cam and the Panthers brass signing him a five-year contract extension, and the money behind him seemed to elevate his play to a new level. He had a monumental season, with a whopping 45 total touchdowns during the regular season. This is the most amount of touchdowns by a single player since 2013. His player ended up winning him the coveted title of NFL MVP. Along with the rest of his team, Newton was able to climb to Super Bowl 50, where the team suffered a crushing defeat against the Denver Broncos. Despite that failure, Newton is still playing under center for the Carolina Panthers, and he is still just as determined to bring the Lombardi Trophy to Charlotte.

Due to his young age and athletic prowess, Cam Newton is seen as somewhat of a heartthrob among NFL players. Believe it or not, he’s not actually married to anyone. He has a longtime girlfriend in Kia Proctor, but the couple have yet to tie the knot.

Does Cam Newton have kids?

If you think that Cam Newton being unmarried at 27 years old means that he doesn’t have kids, you would be wrong. On December 24th 2015, Newton and Proctor welcomed his first-born: a boy named Chosen Sebastian Newton. Cam made a point not to publicize the birth or the pregnancy very much, since he didn’t see any reason to distract the team. (Plus, as you can imagine, he enjoyed the privacy.)

As I mentioned, Cam signed a five-year contract extension with the Carolina Panthers shortly before the 2015 season. This was a $103.8 million contract, and the sheer size of that dollar amount turned a lot of heads when it first went down. In 2015, he made approximately $24 million for his play with the Panthers. This makes him one of the highest paid players in the National Football League.

How much does Cam Newton make per game?

Using that above figure as a starting point, we can use some simple arithmetic to calculate how much Newton makes per game. The NFL regular season consists of 16 games, but there’s potential for 4 additional games after that with the wild card round, divisional round, conference round, and Super Bowl. If the Panthers don’t make the playoffs, then Cam is making $1.5 million per game. If the Panthers make the playoffs and get to the Super Bowl, then that number comes down to $1.2 million per game.

What does Cam Newton drive? Picture of Cam Newton’s car 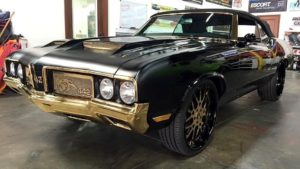 Cam Newton may be one of the biggest professional football players in the world, but he’s also still just a 27 year old guy. And 27 year old guys tend to have an affinity for muscle cars. One of the most well-known cars in his collection is a fully customized 1970 Oldsmobile 442 Cutlass, fully customized with 24 karat gold plating and diamond stitching on the interior. The rims are also completely custom and gold-plated. He was able to pimp his ride through Monster Customs, a business based out of Marietta, Georgia.

Cam Newton is known as Superman on the field, and to a lot of people, he’s Superman off of the field, too. Over the course of his career, he has donated time and money to organizations such as Communities in Schools, SHARE Charlotte, and Metro School. Not only that, but he also has his own charitable organization, called the Cam Newton Foundation.

Cam Newton isn’t even 30 years old yet, and he’s already one of the biggest names in American football. Throughout his career, he has been given countless awards and accolades, including the Heisman Trophy in 2010, the Maxwell Award in 2010, the NFL Offensive Player of the Year in 2015, NFL Most Valuable Player in 2015, and the NFL Offensive Rookie of the Year in 2011. He’s also made 3 Pro Bowl appearances, in 2011, 2013, and 2015.