What Happened to Goldberg – What The Wrestler’s Doing Now 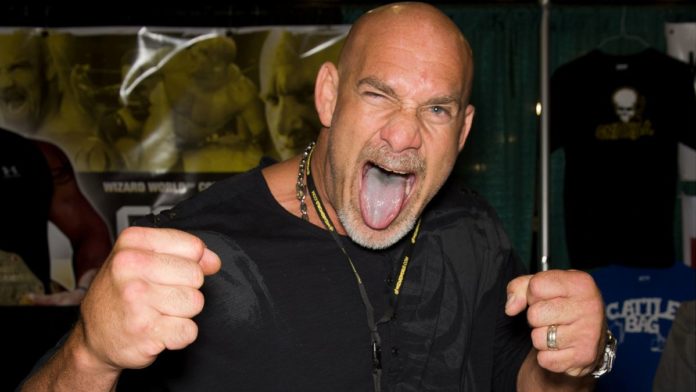 Goldberg is best known for being a nigh-unstoppable wrestler in the WCW and the WWE, with the trademark catchphrase “Who’s next? and armed with two devastating moves namely the Jackhammer and the Spear. Aside from wrestling he’s also had a career in football, MMA commentary, and in the big and small screens.

Before we check out the latest on Goldberg, let’s take a look back at his long and successful journey in entertainment and sports.

William Scott “Bill” Goldberg was born on December 27, 1966, in Tulsa, Oklahoma. As a kid Goldberg preferred playing football and was not that interested in wrestling. He joined the football team of Thomas Edison High School and his incredible talent in the sport attracted scouts from nearby territories to come to Tulsa and personally witness him in play. In the mid 80s Goldberg got a University of Georgia scholarship and was the defensive tackle of the Georgia Bulldogs, with his impressive tally of 348 tackles being the ninth best in the school’s history. He pursued a degree in psychology but failed to finish it as he got drafted to the NFL.

Goldberg spent the first few years of the 90s in different football teams namely the Los Angeles Rams, Sacramento Surge, Sacramento Gold Miners, and Atlanta Falcons. His time with the Falcons ended after an abdominal injury and he jumped ship to the Carolina Panthers, although his football career in this new team fizzled as the injury he sustained from the previous team crippled all hopes of a future in the sport.

Goldberg spent some time on rehab to recover from his injury, and during this period he trained in martial arts and did powerlifting to maintain his strength and physique, and Goldberg still hoped that he could return to the NFL. While training in a gym at Atlanta Goldberg was seen by professional wrestlers Sting and Lex Luger who were also pumping iron there. The legendary duo approached Goldberg with the suggestion of trying his luck in the wrestling ring.

Goldberg in the WCW

Goldberg took heed of the suggestion and began training in the Power Plant, the gym of the World Championship Wrestling (WCW). He signed with WCW in 1996 and debuted in 1997 as Bill Gold. He dominated the ring with an undefeated streak that consisted of matches lasting for only a few minutes. Fans were fascinated by the huge yet surprisingly-agile wrestler who only had a few words and destroyed virtually anyone who stepped into the ring with him.

In 1998 Goldberg was now addressed by his surname and WCW kept track of his long-running streak. He got “over” (drew positive reaction from fans) and steadily showed potential in becoming a possible holder of the prestigious World Heavyweight Championship belt which was currently held by Hollywood Hogan. Goldberg won his first championship and his served as his 107th straight victory. He reigned as champ for 174 days before losing it (and ending his streak of 173 wins) to Kevin Nash.

Goldberg rampaged through the 90s in various feuds and even going on a heel turn (turning into a villainous character) at one point. He stayed until 2001 when the WCW was acquired by the World Wrestling Federation (WWF). Goldberg was out of action during this time as he just had surgery and was in recovery, but even after the sale of WCW he was still paid thanks to the Time Warner (WCW’s parent company) contract. He eventually agreed on a buyout in May 2002 which made Goldberg a free agent.

Goldberg in the WWE

Three months later Goldberg flew to Japan and signed up with the promotion All Japan Pro Wrestling (AJPW). He also did color commentary for the Shockwave Dynamite event of MMA organization PRIDE Fighting Championships. His deal with AJPW wasn’t exclusive which allowed him to work with other wrestling promotions in the country. Goldberg was again dominant in the east, tearing apart foes with ease, and this kind of ferocity didn’t go unnoticed.

In early 2003 Goldberg met with WWE mogul Vince McMahon who then extended the wrestler a contract on the biggest wrestling promotion. Goldberg’s debut came in March 31, the Monday after Wrestlemania XIX, wherein he interrupted the “Appreciation Ceremony” of The Rock with a devastating Spear. The two feuded which resulted in Goldberg’s victory and again the latter went on a rampage. During the same year Goldberg bagged the World Heavyweight Championship and reigned for 84 days.

It was also in 2003 when Goldberg first encountered Brock Lesnar which sparked a rivalry between the two juggernauts, culminating in Wrestlemania XX in a heavily-advertised yet disappointing match as the rumors of the planned departure of the two wrestlers from WWE spread online.

Goldberg’s contract expired and in 2004 he reportedly got into talks with the WWE for a renewal that ultimately did not push through.

Goldberg in Acting and MMA Commentary

Goldberg, like many other wrestlers, had his fair share of acting work. His debut was in the critically-panned action film Universal Soldier: The Return released in 1999. He took a break from the ring by getting “injured” courtesy of the Steiner brothers.

In 2002 he made an appearance at the comedy series Yes Dear and at Arli$$. He also provided voices for some characters in animated shows like Family Guy and Kim Possible. The following year he returned to the big screen in Looney Tunes: Back in Action, and in 2005 in the Adam Sandler comedy The Longest Yard with other renowned wrestlers Stone Cold Steve Austin, Kevin Nash, and The Great Khali.

Goldberg’s debut in a lead role came in the Christmas of 2005 with the black comedy Santa’s Slay. In 2007 he starred with rapper Kurupt in the action flick Half Past Dead 2.

Goldberg’s interest in vehicles was evident in his own television show AutoManiac in 2005 and his hosting work on the 2009 reality series Garage Mahal.

Goldberg continued his career in MMA commentary at a World Fighting Alliance (WFA) pay-per-view event in 2006 titled King of the Streets, at the Dynamite USA event of K-1, and in many events of Elite Xtreme Combat.

Last May 2016 it was revealed that Goldberg was a bonus character who can be acquired upon the pre-order of the upcoming video game WWE2K17. Brock Lesnar on the other hand was the star on the game’s cover. Speculation among fans became rampant concerning the return of Goldberg to the squared circle, especially with the two monster wrestlers hurling insults online and in events. Goldberg returned to WWE last October 17 on Raw and accepted the challenge issued by Paul Heyman.

The two collided in Survivor Series last November 20 which ended in Goldberg’s incredibly-fast victory and with Lesnar suffering from cracked ribs after two Spears. The quick outcome of the match gathered polarizing reactions from fans. On the following Raw episode Goldberg announced that he will be participating in the upcoming Royal Rumble next year. Heyman also announced that Lesnar will be joining the Rumble as well.

Goldberg was one of the cast of the film Enter the Fist and the Golden Fleecing with a still-unknown release date. He is set to appear in future films namely thriller American Satan and action Check Point, both in 2017, and 2018 comedy Holly, Jingles and Clyde 3D. He also stars in the fantasy Soulmates which is still currently filming.

Stay updated with Goldberg by following his Twitter and Periscope (@Goldberg) accounts. You can also visit his website at www.billgoldberg.com for the latest news and merchandise.