Jim Harbaugh Net Worth – How Rich is Michigan’s Football Coach? 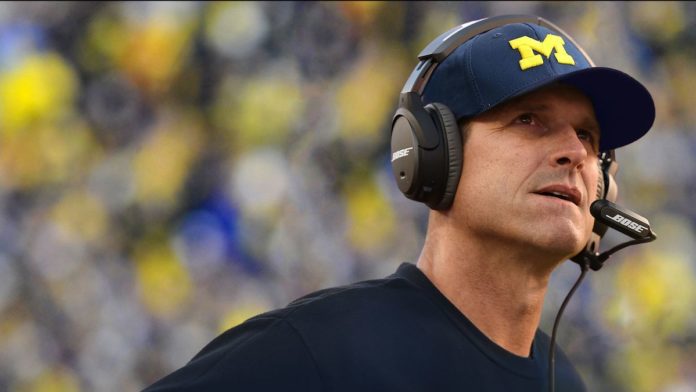 Football is one of the most popular sports in the country, and some would argue that collegiate-level football is even more popular than some professional football. Jim Harbaugh took up a high profile coaching job as the head coach of the Michigan Wolverines in 2015, and he made headlines with his record-breaking salary. In this article, I’m going to be covering Jim Harbaugh’s rise to fame, and how he was able to make so much money along the way. Without further ado, let’s take a closer look at this former football star!

How did Jim Harbaugh make his money & wealth?

Jim Harbaugh was born in December of 1963 in Toledo, Ohio. Jim was born into a family of football, with his father Jack requiring the family to move around frequently as he took on assistant coaching positions at a variety of different schools. Jack coached at places like Bowling Green, Iowa, Michigan, and Stanford. While all of this was going on, Jim was attracting attention as a solid high school quarterback. In 1982, he signed on to play football with Bo Schembechler at the University of Michigan. He was made the team’s starting quarterback in 1984, and he quickly impressed the Wolverines. However, his season came to an early end following an injury in a game against Michigan State. 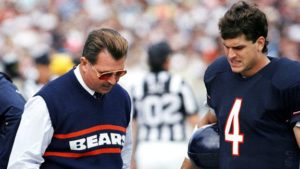 Harbaugh graduated from Michigan as one of their most accomplished quarterbacks of all time. He left as the all-time record holder for passing yards, and he was the second all-time in career passing attempts. It’s worth mentioning that this legacy lasted him a long time, too. He held the career NCAA Division I College Football passing efficiency record for a whopping 12 years. As you can imagine, this kind of talent was highly sought after in the NFL draft, and Harbaugh was selected by the Chicago Bears in the first round. However, it took a long time for the quarterback to really find his groove. A combination of poor coaching and frequent depth chart shuffling prevented him from truly coming into his own. However, during the 1989 season he was still able to earn a team record for single-season completion percentage.

He eventually signed with the Indianapolis Colts in 1994, where he saw a lot more success. His 1995 season with the team was his best, with Jim seeing career highs in completion percentage, touchdown passes, and passer rating. With his high level of play, Harbaugh was able to almost lead the Colts to the Super Bowl, losing in the Conference Championship Game. Following some short stints with teams like the Baltimore Ravens, the San Diego Chargers, and the Detroit Lions, Jim made the tough decision to retire from the NFL as a player. That didn’t mean that he was done with the league entirely, though. In 2002, he earned his first NFL coaching job as the Oakland Raiders quarterback coach under Bill Callahan. During that time, he was able to coach Rich Gannon, who ended up winning the 2002 AP NFL MVP award. Harbaugh received his first head coaching job with the University of Sand Diego in 2004, where an 11-1 season cemented his reputation as one of the greatest coaches to work for the university. 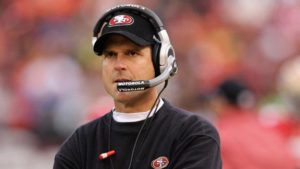 He caught his biggest break in 2007, when he was hired as the head coach of Stanford University, the same school that his father once worked as a defensive coordinator for. The team’s 2010 season was one of their best, with an 11 – 1 record and an invitation to the Orange Bowl, which Harbaugh and company would go on to win. Not only that, but while coaching at Stanford, Jim Harbaugh was able to help develop quarterback Andrew Luck. Luck would go on to be selected as the first overall pick of the NFL Draft. Following this monumental season, Jim was given a job offer that he couldn’t resist: head coach for the San Francisco 49ers. With a 5-year $25 million contract, Jim came aboard and rebuilt the team faster than anyone could have anticipated. Alongside players like Alex Smith and Colin Kaepernick, Harbaugh brought the team to multiple playoff appearances. In fact, in his very first season, Jim played in the NFC Championship Game with his 49ers.

However, all things must pass, and eventually Jim moved onto to even bigger and better things. In December of 2014, Harbaugh returned to his alma mater of the University of Michigan to become head coach. He lost his first game, but he eventually led the team to a 10 – 3 record and a victory in the Citrus Bowl. During the current season, Harbaugh was able to pull his team up to a 10 – 2 record. They are currently set to play Florida State in the 2016 Orange Bowl, which should be a phenomenal match-up. Harbaugh’s contract with Michigan was headline-grabbing, as it shattered the NCAA’s record for highest salary for a football head coach. This record was previously held by the head coach of the University of Alabama, Nick Saban. If you can say anything about Jim Harbaugh, it’s that he has earned his keep both as a coach and as a player throughout his storied career in football.

Yes, Jim Harbaugh is currently married to Sarah Feuerborn Harbaugh. The couple was married in 2008, and they have been together ever since.

Does Jim Harbaugh have kids?

Yes, Jim Harbaugh has many kids. With his first wife, he has two sons (Jay and James) and one daughter (Grace). Jay, going along with the family business, is actually the Tight Ends coach for the University of Michigan. From his current marriage to Sarah, he has two daughters (Addison and Katherine) and a son (Jack). Earlier this year, Harbaugh also announced that he was expected his fourth child with his second wife.

Jim Harbaugh’s starting salary as the head coach for the University of Michigan turned a lot of heads when it was first announced, and it’s still pretty impressive. He is currently being paid $9,004,000 to coach for the college football powerhouse.

How much does Jim Harbaugh make per game?

Using his salary as a starting point, we can use some simple arithmetic to calculate how much Jim makes each game. The college football regular season consists of 12 games, with the potential for 1 conference championship game and 2 games in the playoff. If Jim just coaches during the regular season, then he makes about $750,333.33 per game. If he coaches his team through to the national title game, then he makes about $600,266.66 per game.

As someone who has always been a prominent figure in the football world, a lot of people look up to Jim Harbaugh. Understanding that responsibility, he has put a lot of his time and money into helping a variety of different charitable organizations. During his long career, he has worked alongside organizations like the Children’s Miracle Network, Western Kentucky University, the James Whitcomb Riley Hospital for Children, the Ann Arbor Area Community Foundation, and a lot more. He also has his own charity, called The Jim Harbaugh Foundation.

As both a coach and a player, Jim has a lot to be proud about. In 1986, he was named Big Ten Player of the Year. In 1995, he was granted the title of UPI AFL-AFC Player of the Year. Perhaps his greatest accomplishment as a player is the fact that he is currently a part of the Indianapolis Colts Ring of Honor, as one of the most talented and well-liked quarterbacks to play for the team. As a head coach, he has earned quite a few accolades, as well. In 2011, he was named the AP NFL Coach of the Year. In 2010, he earned the Woody Hayes Trophy. Earlier this year, Harbaugh and his Wolverines were named the Citrus Bowl Champion.