Tim Duncan Net Worth – How Rich is Tim Duncan 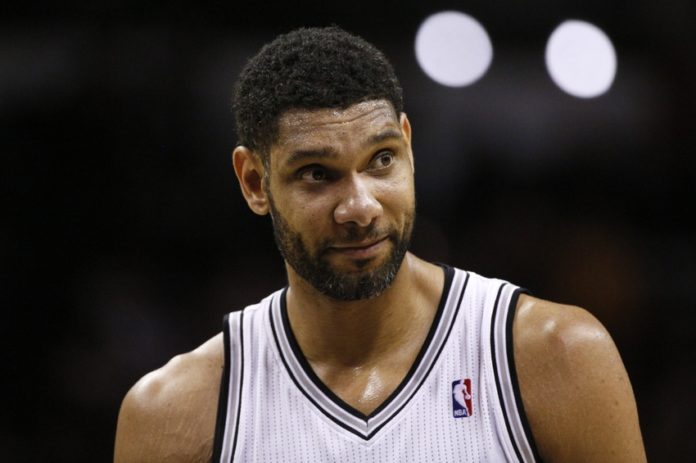 One of the biggest stories of the 2015-16 NBA season was the retirement of Tim Duncan, power forward of the San Antonio Spurs. Duncan had been playing basketball professional for a very long time, and although his departure from the team was inevitable, it still broke the hearts of Spurs fans around the globe. If he’s retiring, that must mean that he has a lot of money saved up, right? In this article, I’m going to be talking a little bit about Tim Duncan’s rise to fame, and how he was able to

How did Tim Duncan make his money & wealth? 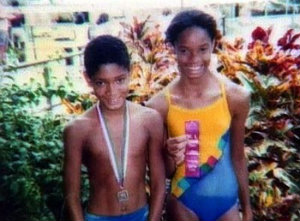 Timothy Duncan was born in April of 1976 in Saint Croix, an island in the United States Virgin Islands. Duncan was very interested in athletics growing up, but believe it or not, he wasn’t interested in basketball. His older sister, Tricia, was an Olympic swimmer who participated in the backstroke events during the 1988 Summer Olympics. Tim aspired to become a swimmer just like her, and he showed great promise at a young age. He intended to participate in the 1992 Olympic Games, with his specialty being in freestyle. However, this dream was cut tragically short when Hurricane Hugo destroyed the only Olympic-sized swimming pool. Duncan was then only able to practice swimming in the ocean, and due to the shark prevalent in the area, he soon became too afraid to continue practicing.

Following his mother’s death just a day before his fourteenth birthday, Duncan had pretty much decided that he would never swim competitively again. He turned to basketball, at the urging of some of his other family members. His size made him an imposing threat on the court, but his lack of technical skill made him an awkward overall player. He gradually learned the mechanics of the game, and by the time he was a senior in high school he was averaging 25 points per game. The low level of most basketball play in the Virgin Islands made major college programs wary of recruiting Duncan, which would prove to be a devastating mistake. He was given scholarship offers by the University of Hartford, the University of Delaware, Providence College, and Wake Forest University. Ultimately, he decided to play for Wake Forest under head coach Dave Odom. 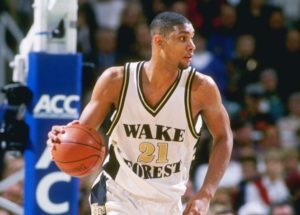 Tim Duncan wasn’t actually meant to play college basketball as a freshman, but due to a transfer of a recent Wake Forest starter, he was able to play. Duncan had a rough go of it to begin with, and he was actually held scoreless during his debut. However, as time went on he became one of the most stalwart and capable players on the team. During his sophomore year, he helped lead Wake Forest to the Sweet 16 in the NCAA Tournament. Due to his outstanding level of play, he was actually named Defensive Player of the Year. It was said that Duncan probably could have entered the NBA at this point, but Tim had promised his mother on her deathbed that he would graduate college with a degree. As a result, he remained with Wake Forest until the end of his senior year. Throughout the remainder of his college career, he was a two-time ACC Player of the Year, and he was even named Most Valuable Player during the 1996 ACC Tournament.

Because of this incredible success at a college level, Duncan was selected by the San Antonio Spurs with the first overall pick of the 1997 NBA Draft. Unlike his experiences playing in high school and college, Tim was excelling in professional play from the jump. Duncan played against the likes of Dennis Rodman and Charles Barkley during the early days of his long career, and Barkley is famous for saying that Tim Duncan would be the future of the NBA. Just in his first year, Duncan was selected to play in the 1998 NBA All-Star Game, and he was even named NBA Rookie of the Year. The young man from Saint Croix had cemented his reputation and his legacy as one of the most capable defensive players in NBA history. By 2003, Duncan had already stepped into a strong leadership role for the San Antonio Spurs, and his stoic, cool under pressure demeanor made him well-suited for such a position. 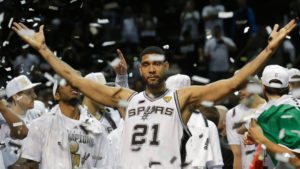 Looking back, Tim Duncan has had quite the NBA career. With the help of Duncan, the San Antonio Spurs won a whopping five NBA championships. It’s also worth mentioning that Tim’s level of play never fell off, especially when you compare it to how some athletes deteriorate as their career progresses. He wasn’t just good. He was consistent. Aside from his middling free throw percentage, Duncan was also an excellent all-around player. Whether it was scoring, rebounding, or blocking, he was considered a major threat on the court. His retirement in 2016 disappointed a lot of people, but I don’t think that it really surprised many people. He opted into a multi-million dollar contract for the 2016-2017 season, but you have to consider that this guy had been playing in the NBA for 19 years. He didn’t enter the draft as an eighteen year old, either. Regardless, I don’t think that there’s anyone in the world who can deny Tim Duncan’s abilities as a basketball player and leader.

Despite his nice guy persona, Tim Duncan isn’t actually married to anyone. In 2001, he married Amy Sherrill, but the couple ended up divorcing in November of 2013.

Does Tim Duncan have kids?

In 2015, Tim made $6 million off of his play. After that season, he actually signed another long-term contract with the Spurs, but it ended up falling through when he decided to retire. It has been estimated that Tim Duncan made close to $236 million throughout his entire career as an NBA athlete. Not bad for a kid who didn’t score a single point in his first college game.

How much does Tim Duncan make per game?

Using the $6 million salary as a starting point, we can look at the 61 games that Tim Duncan played during the 2015-16 season and perform some simple arithmetic to determine how much he made per game. Based on those figures, Duncan made approximately $98,360.66 per game during the 2015-16 NBA regular season. If you count the 10 playoff games that he played in, then that figure is knocked down to around $84,507.04 per game.

Duncan is well-known for his phenomenal defensive play, but he’s also known for being a dedicated philanthropist. Tim was considered to be really studious while he played professional basketball, and so he smartly dedicated a great deal of time and money during his professional career supporting various charitable causes. Over the years, he has supported the likes of the American Cancer Society, and he also has his own charitable organization in The Tim Duncan Foundation. He supported causes like health awareness, youth sports, education, and cancer research. 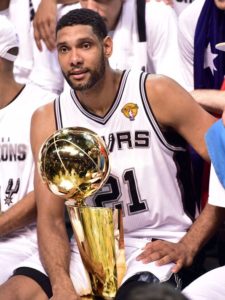 During his long and storied career, Duncan has almost earned more awards than you can count. Most notably, he won the NBA Championships with the San Antonio five times. He was named the NBA’s Most Valuable Player three times. He holds the record of being the all-time leading scorer of the San Antonio Spurs. He was named the NBA Finals MVP three times. He won NBA Rookie of the Year in 1998. He won two gold medals in the FIBA Americas Championship. He was a 2-time consensus first-team All-American. In 2003, he was named the Sports Illustrated Sportsman of the Year. Love him or hate him, he has a prolific legacy as being one of the best basketball players of all time.