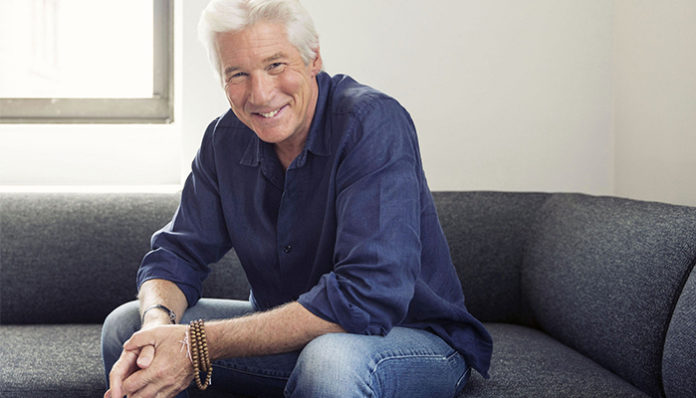 Richard Gere is an American actor who initially rose to fame in the early 80’s in the film, American Gigolo. Growing up, he had always been one for the performing arts; in particular, he was a skilled trumpet player. It wasn’t until he was in his early twenties, that he first discovered an interest in drama and theater. Wanting to put himself out there on the stage, he began auditioning for various roles and eventually landed a part in a musical production of Grease in London. After taking part in several plays, the aspiring actor made his television debut in the film, Chelsea D.H.O. in 1973; he later appeared on the big screen for the first time in the 1975 film, Report to the Commissioner. Over the next years, Gere continued to play a number of small roles in Strike Force (1975), Baby Blue Marine (1976), Looking for Mr. Goodbar (1977), and Days of Heaven (1978). It ultimately wasn’t until 1980ーseven years after he entered the show businessーthat he received his breakthrough role in the crime film, American Gigolo.

Popular amongst viewers, the film garnered the up-and-coming actor much attention at the time of its release; it’s also known to have established him as a leading man and sex symbol. With his popularity on the rise from his time on American Gigolo, Gere began appearing in more films in the subsequent years including An Officer and a Gentleman (1982), The Honorary Consul (1983), The Cotton Club (1984), King David (1985), and No Mercy (1986). Having successfully established himself as a star throughout his multi-decade career, it’s not surprising to know that Gere has accumulated a fair amount of industry awards over the years. To date, he has received a Golden Globe Award, two Broadcast Film Critics Association Awards, two Hollywood Film Awards, a Screen Actors Award, amongst many others. As of 2016, he has appeared in well over 50 different roles in both television and film.

What has the 67-year-old veteran actor been up to since then? What are some of his recent endeavours? What happened to Richard Gere? Where is he now in 2018?

Born on August 31, 1949, in Philadelphia, Pennsylvania, Richard Tiffany Gere is the son of Homer George, an insurance agent, and Doris Ann Gere, a housewife; he is the oldest out of five siblings. Growing up, Gere loved music; proving himself to be a natural musician, it didn’t take long for him to become highly adept at playing the trumpet.

As a teen, he was a talented gymnast and went to North Syracuse Central High School as a student; he later graduated in 1967. Offered a full gymnastics scholarship, he then enrolled at the University of Massachusetts, where he chose to major in philosophy. Finding himself not particularly engaged in his classes however, Gere eventually dropped out of college after two years in order to pursue a career in drama and theater. In the early 1970’s, he began working at the Seattle Repertory Theatreーit was then that he starred in the musicals, Guildenstern Are Dead and Rosencrantz.

Gere eventually made his television debut in the TV movie, Chelsea D.H.O (1973). Determined to succeed, he participated in a number of auditions and eventually landed a few small roles in Report to the Commissioner (1975), Strike Force (1975), Baby Blue Marine (1976), and Kojak (1976)ーthe first of which was also his initial film appearance. Four years later, he received a big break when he was cast as a supporting character in the movie, Looking for Mr. Goodbar (1977) alongside Diane Keaton, Richard Kiley, and Tuesday Weld. From there, he appeared in the films Days of Heaven (1978), Bloodbrothers (1978), and Yanks (1979) prior to receiving a breakthrough role in the crime drama, American Gigolo (1980).

Originally released in theatres on February 8th, 1980, American Gigolo starred Gere as Julian Kaye, a highly sought after male escort, who becomes romantically involved with the wife of a Los Angeles politician. A commercial success, the film effectively established the actor as both a sex symbol and a leading man. One of the first Hollywood movies to feature full male nudity, it also spawned a number one hit single entitled, Call Me. Responsible for propelling Gere into stardom, it grossed over $22 million from a production budget of $4.8 million during its theatrical run. Directed and written by Paul Schrader, American Gigolo also starred Lauren Hutton, Hector Elizondo, Nina Van Pallandt, and Bill Duke. 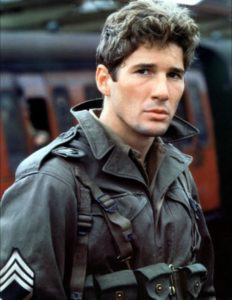 Carrying on with his flourishing career, Gere starred in the romantic drama film, An Officer and a Gentleman in 1982. A Paramount Pictures production, it opened in theatres on August 13th, 1982 and was met with an overwhelmingly positive reception; in particular, many praised it for its perfect balance of melodrama and romance. Considered to be one of the best movies of 1982, it depicted the story of a young man named Zachary Mayo (played by Gere), who is a student at the Aviation Officer Candidate School.

Applauded for his performance in the film, the role earned the actor a Golden Globe Award nomination for “Best Actor in a Motion Picture – Drama” in 1983. Aside from Gere, An Officer and a Gentleman also featured Debra Winger, David Keith and Louis Gossett, Jr. in starring roles. Despite having been produced on a $6 million budget, the movie proved to be a huge hitーgrossing over $129 million; it also went on to win multiple awards including four prestigious Academy Awards.

In the winter of 1990, he was cast as the male lead in the romantic comedy, Pretty Woman opposite of actress, Julia Roberts. Directed by Garry Marshall, it revolved around Edward Lewis, a womanizer who hires an escort named Vivian Ward, to accompany him to a number of corporate eventsーonly to end up falling in love her. Released that December, it was a massive success at the box office; it debuted at number one and grossed over $11 million during the opening weekend. One of the most popular romantic comedies of all time, it later went on to reap in over $463 million worldwide. Nominated for an Academy Award, Gere’s performance in the film also earned him a Golden Globe Award nomination for “Best Actor” at the 48th annual ceremony.

Transitioning away from comedy, Gere starred in the neo-noir crime thriller, Primal Fear in 1996. Based on a 1993 novel of the same title by William Diehl, it told the story of Martin Vail, a Chicago defense attorney who works to help an altar boy who has been accused of murdering a priest. Another huge box office hit for the actor, it raked in over $102 million during its theatrical run from a production budget of $30 million. Aside from the actor, who played the part of Martin, the cast of Primal Fear also included Laura Linney, John Mahoney, Alfre Woodlard, Frances McDormand and Edward Norton. Met with favourable reviews from both critics and viewers, it won a number of awards including a Golden Globe Award, a Boston Society of Film Critics Award, a Florida Film Critics Award, amongst many other nominations.

In 1999, the actor once again reunited with Julia Roberts in the romantic comedy, Runaway Bride. Directed by Garry Marshall, the film centred around a New York columnist, Homer Graham (played by Graham), who is tasked with writing a story about a woman (played by Roberts) who has a history of leaving her fiancés at the alter; as he gets to know her better, he ultimately finds himself falling for her.   Filmed majorly in the historic town of Berlin, Maryland, Runaway Bride peaked at number one at the box office and grossed over $35 million in its opening weekend. While it received many awards including two ASCAP Film and Television Music Awards, and an American Comedy Award, it garnered generally mixed reviews from viewersーmany criticizing it for its predictable plot and shallow characters. Nonetheless, it did go on to earn Gere a Blockbuster Entertainment Award nomination for “Favourite Actor in a Comedy/Romance” in 2000. 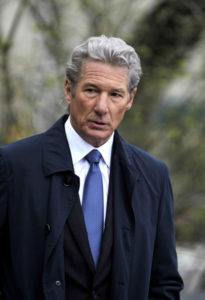 Gere’s next big hit came after the new millennium, when he starred in the musical comedy, Chicago alongside Renee Zellweger and Catherine Zeta-Jones. Based on a musical of the same name, it made its way to the theatres on December 27, 2002 in the United States. Featuring a screenplay by Bill Condon, Chicago centred around two death row inmates, Roxie Hart and Velma Kelly (played by Zellweger and Zeta-Jones respectively), who find themselves fighting against each other for fame and notoriety. In the film, Gere portrayed the role of Billy Flynn, a double-dealing yet smooth-talking lawyer.

Aside from the previously mentioned actors, Chicago also featured appearances from Queen Latifah, John C. Reilly, Christine Baranski and Taye Diggs. Universally acclaimed, it eventually went on to gross over $306 million worldwide, despite the fact that it never managed to achieve either the number one or number two position at the box office. Although some individuals claimed that Chicago was “too streamlined”, most reviews praised it for being a fun and energetic adaptation of the original Broadway production.

For many years, it remained to be the highest-grossing musicalー until the release of Mamma Mia! in 2008. As for Gere, his role as Billy also earned him multiple awards including a Golden Globe Award, an AARP Movie for Grownups Award, and a Screen Actors Guild Award, amongst numerous other nominations.

The actor has been quite busy with filming! Not only did he just recently star in the thriller, Norman (2016), but he also has a number of upcoming films for 2018ーone of which is the mystery drama, The Dinner (2017). Based on a novel by author Herman Koch, it will also star Laura Linney, Rebecca Hall, Chloe Sevigny, and Steve Coogan. Currently in post-production, The Dinner is set to be released in theatres on May 5th, 2017.

Another one that he’ll be starring in is the drama film, Three Christs (2018). Directed by Jon Avnet, it will center around three paranoid schizophrenic patients at a fictitious Michigan hospital, each of whom believes they are Jesus Christ. As of 2016, Gere’s role in the movie has not yet been revealed; however we do know that he will be joined by Peter Dinklage, Julianna Margulies and Walton Goggins. It will set to be released sometime in 2018, although no official date has been announced.