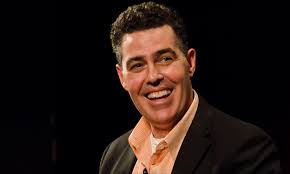 Adam Carolla is an american comedian, most known for his work on Loveline and The Man Show, and for his popular daily podcast The Adam Carolla Show.

Adam Carolla was born on May 27, 1964 in Los Angeles to an Irish-Italian family. His parents separated when he was a kid. Carolla attended high school where he was a football player. At 18 he moved out and briefly attended college, but dropped out. After that, he worked as skilled labor doing odd jobs like carpet cleaner, carpenter, and boxer. He also studied improv with The Groundlings.

In 1994, Jimmy Kimmel, a regular sports guy on the morning radio show, was challenged to a boxing match. Adam was a fan of the show, so he volunteered his boxing coach skills to help train Jimmy. After that, Jimmy got him a job at the show. In 1995, William Morris Agency signed Carolla to a deal. Dr . Drew heard Adam on the show, liked his style and asked him to be the co-host of Loveline. The call-in radio show was centered around sex and romantic relationships, and got syndicated very quickly. In 1998 Carolla and Dr. Drew wrote “The Dr. Drew and Adam Book: A Survival Guide to Life and Love” a self-help book that compiled some of the advice they gave on Loveline.

In 1999, Adam partnered with Jimmy Kimmel for The Man Show. The show was successful, but in 2003 the two decided to move on to other projects. Adam then created Crank Yankers, a Comedy Central prank call show that featured celebrities.

In 2005, Adam hosted the talk show Too Late with Adam Carolla on Comedy Central. Later that year, he hosted The Adam Carolla Project on TLC, a home remodeling show where he had his longtime friends help him remodel his old home. This show ended with the house being sold for $1.2 million. In 2006, Adam got a radio show in the mornings. The Adam Carolla Show replaced the Howard Stern Show when Stern moved into XM.

In 2006, Carolla co-wrote and co-produced The Hammer, an independent film about a middle-aged former boxer who tries to get on the US Olympic team. The film is loosely based on Adam’s life. It was released in theaters on March 21, 2008. It received positive reviews, standing at 80% on RottenTomatoes.

In 2008, Carolla went on “Dancing with the Stars.” He and his partner Julianne Hough were voted out on the 4th episode. Later that year Carolla was selected to host the pilot for the American version of Top Gear, but NBC did not pick up the show. In 2009, after KLSX-FM’s format change, the Adam Carolla Show was canceled. In 2009 Carolla started up his podcast. The entire podcast was a huge hit, with millions of downloads per day. At the end of the year The Adam Carolla Show was named by iTunes “Best Audio Podcast of 2009.” In November 2010, Carolla published another book called “In Fifty Years We’ll All Be Chicks”.

Adam Carolla still does his wildly successful daily podcast.  In 2013 Carolla crowd-funded a film he directed and starred in called Road Hard, about the lives of aging comics on the road. The film had a limited theatrical run and got mixed reviews. In 2014 Adam started hosting “Catch a Contractor” a non-scripted, original series on Spike. Adam along with “no-nonsense contractor” Skip Bedell and his wife, investigator Alison Bedell, expose crooked contractors. The show premiered on Spike to 1.2 million viewers. In 2015 Adam directed a documentary about Paul Newman’s 35-year career in car racing.