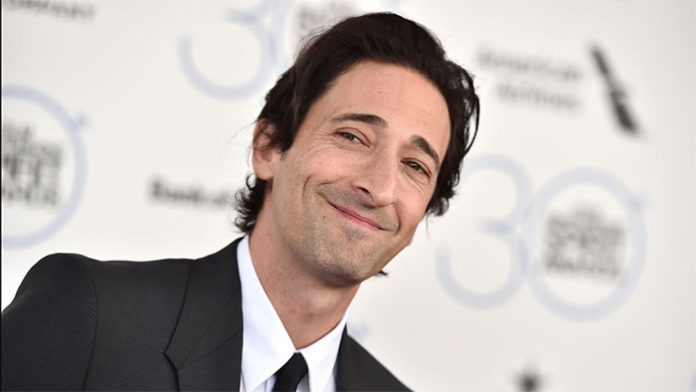 Hailing from New York, Adrien Brody rose to international fame in Roman Polanski’s historical film, The Pianist (2002). As a young teen, he studied drama at Manhattan’s American Academy of Dramatic Arts and also performed magic tricks as “The Amazing Adrien” at birthday parties. A natural performer, he appeared in an Off-Broadway production by the time he was thirteen. Later attending the Fiorello H. LaGuardia High School of Music & Art, it wasn’t long until he made his television debut in the comedy series, Annie McGuire (1988) at the age of fifteen. Continuing to hone his skills over the next years, Brody eventually appeared on the big screen for the first time in the romance comedy, New York Stories (1989). Some of his other early works include The Boy Who Cried Bitch (1991), Angels in the Outfield (1994), Ten Benny (1995), and The Last Time I Committed Suicide). Although his initial performances were praised upon, the roles ultimately failed to propel him into stardom. It wasn’t until the second half of the 1990’s that he eventually landed bigger roles in Restaurant (1998), Summer of Sam (1998), and The Thin Red Line (1998).

From there, Brody appeared in a handful of movie before receiving a breakthrough role in the war film, The Pianist (2002)ーit remains to be one of his most well-known portrayals to this date. Met with instant praise and applause, it was nothing short of a commercial success, earning well over the $120 million mark. For his portrayal of the title character, the actor received critical acclaim and became the youngest male artist to be awarded an Academy Award for the category of “Best Actor” at the age of twenty nine. Since his launch into fame, Brody has gone on to win a Huading Award for “Best Performance by an Actor”, and a Satellite Award for “Outstanding Motion Picture Ensemble”ーhe also became the first and only male American actor to have ever received the prestigious César Award in 2003.

While his primary focus is on film, Brody has also appeared in several television series throughout the years including Home at Last (1988), Bullet Hearts (1996), Split Screen (1999), and Houndini (2014)ーthe last of which earned him a Primetime Emmy Award nomination. A frequent guest on television, he has been interviewed on many American talk shows such as Jimmy Kimmel Live! (2007), The Tonight Show with Jay Leno (2010), Chelsea Lately (2012), Talk Stoop with Cat Greenleaf (2014), and The Late Show with Stephen Colbert (2016), amongst many others. Versatile and well-rounded, the actor even hosted an episode of Saturday Night Live back in 2003!

So what has the award-winning actor of The Pianist fame been busy with as of late? What new projects have he taken on in the recent years? What are some of his latest starring roles? What happened to Adrien Brody? Where is he now in 2018? 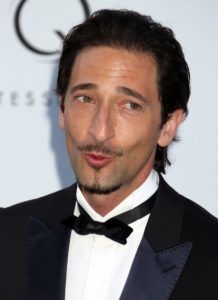 Born on April 14, 1973, in New York City, New York, Adrien Brody is the son of Elliot Brody and Sylvia Plachy, a retired professor and a photographer; he is of Hungarian and Polish descent. Growing up, he often accompanied his mother to work at the studio, learning the ins and outs of photographyーhe has also credited her for helping him to feel comfortable in front of the cameras.

Having developed an interest in acting at a young age, Brody later took acting lessons at Manhattan’s American Academy of Dramatic Arts as a child. When he was thirteen, he took to the stage for the first time in an Off-Broadway production. When he wasn’t honing his skills as an aspiring actor, he was a student at the LaGuardia High School for the Performing Arts.

Brody’s television debut came in 1988 when he was cast as a small role in the series, Annie McGuire. Eventually appearing in a TV film called, Home at Last (1988) later that year, he soon made his big screen debut in the romantic comedy, New York Stories in 1989. While waiting for his big break, he went on to appear in a series of movies including The Boy Who Cried Bitch (1991), King of the Hill (1993), Angels in the Outfield (1994), and Ten Benny (1995). After many years of hard work, he finally began landing larger parts in the latter half of the 1990’s. In 1998, he starred in Eric Bross’ drama film, Restaurant; one of his first major roles, it earned him an Independent Spirit Award in 2001. Not long afterwards, Brody was cast in the epic war film, The Thin Red Line in 1998.

Released nation-wide on January 15, 1999, after a limited release in five theatres in December of 1998, it proved to be a box office hit, earning over $9.7 million during its opening weekend. By the end of its theatrical run, the war epic had grossed over $98 million worldwideーwhich made it a commercial success, considering the fact that it was produced on a $52 million budget. Hailed as one of the best contemporary war films by critic Gene Siskel, The Thin Red Line garnered many industry accolades, including a Satellite Award for “Outstanding Motion Picture Ensemble”, which the actor also shared. 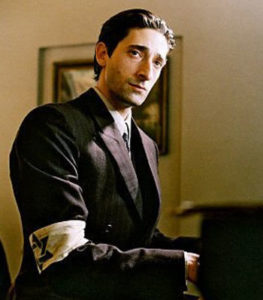 After many years of acting work, Brody received one of the biggest breaks of his career when he was cast as the title character in yet another war film, The Pianist (2002). Based on an autobiography of the same name by Wladyslaw Szpilman, it revolved around his life as a Polish Jewish musician in the 1940’s, as he struggles to live and survive through the destruction of World War II. Opened in theatres on March 30, 2003, The Pianist grossed over $2.4 million in its opening weekend across over 770 screens in the United States. Overwhelmed with praise, the movie received countless positive reviews from criticsーmany of whom lauded it for its moving storyline and stunning cast performance. Taking on the role of Szpilman, Brody received immense applause for his portrayal of the professional pianist. Not only did his dazzling performance earn him a Golden Globe Award nomination for “Best Performance by an Actor in a Motion Picture”, but it also earned him an Academy Award for the category of “Best Actor in a Leading Role”ーmaking him the youngest male actor to have ever won the Oscar. Even to this day, many consider The Pianist to be one of the greatest works and most well-remembered roles of his career. 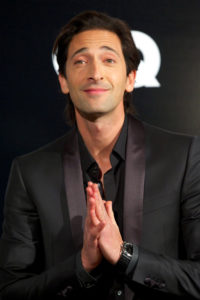 Stepping away from the war genre, he starred in the adventure drama movie, King Kong in 2005. Based on the original classic from the 1930’s, it told the story of a legendary gorilla named Kong, whom a group of filmmakers capture and attempt to display with disastrous results. Created under the direction of Peter Jackson, the film was released in theatres on December 14, 2005 in the United States. Well received by viewers, it grossed over $50 million during its opening weekendーan all-around impressive figure, although some analysts had estimated it to be higher.

Utilizing motion capture technology, the crew was able to render Kong as realistic as possible with the help of Andy Serkis, whose movements were recorded and used in the film. In terms of Brody, he played the part of Jack Discrollーa screenwriter and member of the group. Aside from them, King Kong also featured actors Naomi Watts, Jack Black, Thomas Kretschmann, Colin Hanks and Jamie Bell. Praised for its special effects, it later generated over $550 million at the worldwide box office. Supported by a four-star soundtrack, went on to win three Academy Awards (e.g. Best Achievement in Visual Effects, Sound Editing and Sound Mixing) in 2006.

In 2011, Brody worked with director Woody Allen in the romantic comedy, Midnight in Paris. Set in the city of Paris, it centred around a screenwriter, who finds himself traveling back in time to the early 1920’s every night at midnight. Revolving around the themes of modernism and nostalgia, the film was released on May 20, 2011 and was met with favourable reviews. Praised by many to be one of Allen’s best works, Midnight in Paris was given a near-perfect score of three and a half stars by film critic, Roger Ebert.

Universally acclaimed, it starred Owen Wilson as the time traveler, Gil Pender while Brody portrayed the part of Salvador Daliーone of the surrealists whom Pender confides with in the film. Quickly proving itself to be a major hit, Midnight in Paris took in over $599,000 during its initial limited release across six theatres; it eventually grossed more than $151 million by the end of its theatrical run. As expected from such a successful film, it was nominated for over 90 different awardsーover twenty of which ended up being wins.

Three years later, he joined the ensemble cast of the comedy, The Grand Budapest Hotel (2014), alongside Ralph Fiennes, Tony Revolori, F. Murray Abraham, Mathieu Amalric, and Harvey Keital. A British-German-American co-production, it told the story of Gustave Hーa legendary concierge who works at a world famous hotel in the fictitious Republic of Zubrowka. Filmed on location in Germany, The Grand Budapest Hotel made its way to the theatres on March 7, 2014, a month after its initial release in Berlin. A financial success, it grossed over $8 million at the US box office within a period of four weeksーit ultimately became one of Anderson’s most successful live-action films. While Ralph Fiennes played the part of Gustave, Brody appeared as a man named Dmitri Desgoffe und Taxis. Included in many year-end top ten lists, The Grand Budapest Hotel later won a record-breaking, 122 awardsーfour of which were Oscars. 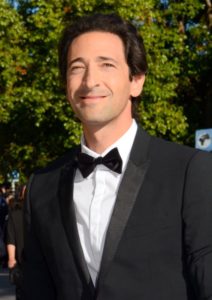 This year, Brody has spent much of his time filming for the upcoming adventure thriller, Emperor (2017). Directed by Lee Tamahori, the action epic will tell the story of a young girl who is looking for revenge on Emperor Charles V for the death of her parent. According to what has been announced, its cast list will also include Sophie Cookson, Paz Vega, Thomas Ketschmann, Oliver Platt and Eddie Marsan. Unfortunately for us, no official release date has been announced as of yet.

Another project that the actor is currently working on is the crime movie, Unchained (2017). While it’s known that Paul Solet will be directing the film, details about the plot have not yet been revealed. Having said that, it will be starring John Malkovich, Antonio Banderas, Ori Pfeffer and Owen Davis.

If you’d like to stay up-to-date with the Academy Award-winning actor, you can follow Adrien Brody on social mediaー you can find him on Instagram at @adrienbrody.