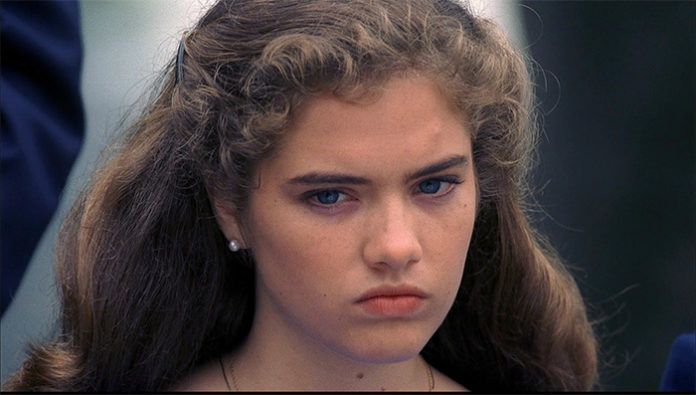 American actress, Amanda Wyss first rose to fame in the horror film, A Nightmare on Elm Street (1984). As a teen, she was noticed by a talent agent who happened to see her in a production of The Bad Seed in Los Angeles. With a little encouragement, the blonde soon began appearing in a number of commercials; from there, she eventually made her television debut in the comedy series, When the Whistle Blows (1980) at the age of twenty. In 1981, the aspiring actress made her motion picture debut in the adventure drama, Force: Five. Over the next couple of years, Wyss appeared in several television series including Buck Rogers in the 25th Century (1982), Teachers Only (1982), Star of the Family (1982), and The Powers of Matthew Star (1983). A long list of minor roles later, she rose to international prominence in the horror flick, A Nightmare on Elm Street (1984)ーin which she portrayed the role of Freddy’s first victim. The following year, she went on to appear in the comedy, Better Off Dead (1985) alongside John Cusack, David Stiers and Diane Franklin.

Continuing to rise in fame, Wyss subsequently appeared in the critically acclaimed western film Silverado later that same year. On the small screen, she also landed a few minor roles in the series, Glitter (1985), St. Elsewhere (1985), Cheers (1986), and The New Adventures of Beans Baxter (1987), to name a few. Of course, she also took part in various made-for-television movies such as Something in Common (1986), and Independence (1987). Having said that, it wasn’t until 1992ーover a decade after her official debutーthat she was offered a starring role for the first time in the fantasy series, Highlander: The Series. The next time that she appeared as a series regular was when she was cast as Tina Vincent in the popular drama, CSI: Crime Scene Investigation in 2001. Following that, she took a brief break from acting before returning as a small role in the action thriller, The Division (2014).

While it would appear that Wyss is more focused on working in television than film, she has involved herself with a number of projects on the big screen within the past decadeーfor instance, she had parts in Fallacy (2004), The Graves (2009), Deadly Impact (2010), and The Id (2015). More recently, she starred in a horror film short called Oct 23rd (2016), a role that ultimately earned her awards from both the Santa Monica and Glendale International Film Festivals. Altogether, the actress has taken on more than eighty different roles since the beginning of her career.

What has the California-born actress been doing lately? Given that she’s still actively filming, what are some of her latest projects? What kind of roles have she portrayed in the recent years? What happened to Amanda Wyss? Where is she now in 2018? 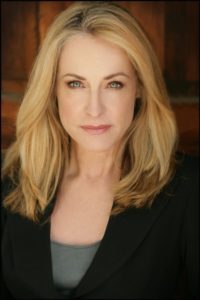 Born on November 24, 1960 in Manhattan Beach, California, Amanda Wyss is the daughter of a homemaker and a contractor. Together with her four siblings, Wyss was raised near the cool coastal beaches of Los Angeles. Considering her flair for performing, it wasn’t surprising that the blonde participated in a number of local plays growing up.

In fact, it was during one of these performancesーwhen she starred in The Bad Seed as a teenーthat she caught the eye of a talent agent who happened to witness her talents on stage. With a little bit of encouragement, Wyss soon began auditioning for commercial gigs; it didn’t take long for her to make her debut on national television. Later on, when Wyss was twenty years old, she landed her first professional acting role in the television series, When the Whistle Blows (1980).

Before long, Wyss found herself pursuing acting as a full-time career. In 1981, she made her feature film debut in the adventure drama, Force: Five playing as a minor character. Over the next couple of years, she appeared in a variety of TV shows including ABC Afterschool Specials (1981), Jessica Novak (1981), Teachers Only (1982), Star of the Family (1982), and The Power of Matthew Stars (1983). While she was considerably more involved with television work, she also made a small appearance in the comedy drama, Fast Times at Ridgemont High in 1982. Finally in 1984, Wyss received the big break that she had been waiting forーshe was cast as one of the starring characters in the supernatural slasher film, A Nightmare on Elm Street. 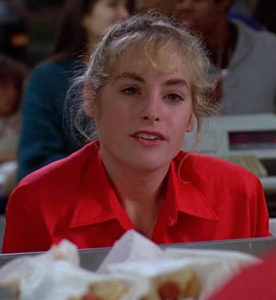 Written and directed by the award-winning producer Wes Craven, A Nightmare on Elm Street revolved around a murderous serial killer who hunts and kills his victimsーmostly a group of teenagersーin their dreams. The film’s principal antagonist, Freddy Kureger, was portrayed by the actor, Robert Englund. In the film, Wyss was cast as one of the teens who eventually find themselves to be targetedーChristina Gray. In addition to its crew of seasoned actors such as John Saxon and Englund, A Nightmare on Elm Street also starred Johnny Depp (who was still an up-and-coming actor at the time), Heather Langenkamp, Ronee Blakey, and Leslie Hoffman.

Released in a limited amount of theatres on November 9, 1984, A Nightmare on Elm Street grossed over $1.2 million during its opening weekendーwhich rendered the movie a commercial success. By the end of its run in North America, the slasher film had grossed a total of $25 million in ticket sales. A major box office hit despite its low budget of $1.8 million, it garnered multiple praises from critics who praised it for “transgressing the boundaries between the real and imaginary”. Described as “extraordinarily polished” by The Washington Post, it also received applause from several other publications such as Variety Magazine and the Monthly Film Bulletin. Boasting a 94% approval rating on Rotten Tomatoes, A Nightmare on Elm Street ultimately gave Wyss’ burgeoning career at the time, a powerful boost.

Just a year later, Wyss secured a supporting role in Lawrence Kasdan’s western film, Silverado (1985). Produced by Columbia Pictures, it followed a number of friends as they come together in attempts to right the perceived injustices of a small town. The cast list consisted of Kevin Kline, Scott Glenn, Danny Glover, Kevin Costner, and Brian Dennehy; while the previously-mentioned actors played the roles of the male leads, the blonde took on the role of a young woman named Phoebe.

Filmed mostly on location in New Mexico, Silverado debuted in theatres on July 12, 1985. During its opening weekend, the motion picture grossed a little over $3.5 million across 1100 screens, placing it in seventh place at the box office. In the second week of release, ticket sales increased marginallyーfor a total of $3.6 million. By the end of its eleven-week theatrical run, the western film had grossed over $32 million worldwide, making it a moderate financial success. Mostly lauded by critics upon its release, Silverado garnered much praise for Kasdan’s brilliant telling of the story; as such, it currently holds a favourable rating of 76% on Rotten Tomatoes. Recognized by the American Film Institute to be one of the “Top 10 Western Films”, it went on to receive two Academy Awards nominations in 1986. 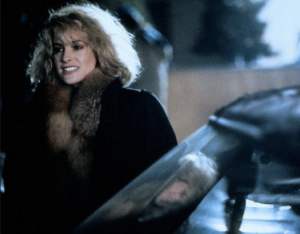 In 1989, Wyss was amongst one of the main actors in the comedy film, Powwow Highway. Adapted from a novel of the same name by author David Seals, it depicted the struggles experienced by Native Americans living in certain reservations in the Northern parts of the United States. The movie’s protagonists include Buddy Red Bow (played by A. Martinez)ーa member of the Northern Cheyenne tribe, and Philbert Bono (play by Gary Farmer)ーa man guided by sacred visions. In the movie, Wyss portrayed the part of Rabbit Layton; other actors featured in the cast include Joanelle Romero, Sam Wlahos, Wayne Waterman and Margot Kane.

Released on February 24, 1989, Powwow Highway unfortunately, did not turn out to be a box office hitーas it only managed to gross approximately $283,000. Having said that, the film was generally well-received by critics; for instance, Roger Ebert of The Chicago Sun-Times gave the movie two thumbs up, having praised the actors’ performances. In spite of its relatively low ticket sales, Powwow Highway later won multiple awards at the Native American and Sundance Film Festivals.

Three years later, the blonde actress co-starred in a fantasy science fiction series, Highlander: The Series (1992)ーit also marked the first time that she played a lead character on television. A Canadian-Italian-French-American production, the show centered around a man named Duncan MacLeodーan immortal who must live in modern society, all while concealing his nature and battling against others of his kind. While Adrian Paul played the role of MacLeod, Wyss portrayed the character of Randi McFarlandーan investigative reporter for a fictitious network known as KCLA TV. Over the course of the show, she grows increasingly more curious about MacLeod; despite her best efforts however, she never truly figures out his identity. Joining the main cast in episode four of the first season, she later made her last appearance in the thirteenth episode entitled, “Band of Brothers”.

A critical hit upon its release on October 3, 1992, Highlander: The Series received nothing but favourable reviews from critics and viewers alike; in fact, the general consensus was even more positive than the original Highlander film from 1986. Although some individuals did not see the appeal of the supporting characters, most were wowed by its impressive action scenes and brilliant writing. Although Wyss left the show after seven episodes, Highlander: The Series ultimately ended up continuing for six seasons, totalling more than 100 episodes. One of the most-watched television series at the time, it was nominated for countless awards including two Saturn Awards, three Gemini Awards, two Golden Reel awards, amongst a few others. In terms of her work on television, Wyss’ portrayal of Randi remains to be one of her most well-remembered performances on the small screen. 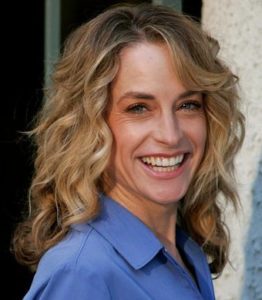 If you’ve been waiting for the actress to grace the screens with her presence once again, then you’re in luckーaccording to her IMDb page, Wyss has been busy filming for several projects, most of which are to be released in 2017. One of them, The Capture (2017) is a science fiction movie written and directed by Jim Agnew. Although not much is known about the film at this point, the cast listーwhich consisted of Nora-Jane Noone, Annie Monroe, Rodney Rowland and Jonathan Howardーhas been made available.

Another one of said projects is the horror thriller, Alice: The Hatred (2017). Created and directed by Michael G. Kehoe, it centres around four young students who travel to a college professor’s country home, only to discover the building’s malevolent past. The film will star Wyss as a character by the name of Beth Crossan; it is set to be released in February 2017.

If you’d like to stay up-to-date with the blonde beauty, you can do so by following Amanda Wyss on social mediaー you can find her on Twitter at @_AmandaWyss.